Our 1992 Ford Escort trim comparison will help you decide.

Conceding that not every Escort buyer relishes a hatchback, Ford hasbrought out a pair of four-door notchback sedans for 1992.

The additions to the recently redesigned Escort lineup are the LX and LX- E sedans. They are called “notchbacks“ because they have trunks that slamshut to hide cargo, unlike hatchbacks.

Kudos to the Ford design team. Not only did it add the security of atrunk, it also pulled off a highly stylized subcompact-and one with kick to itfrom its 127-h.p. twin-cam 4-cylinder engine, the one that powers the EscortGT.

Of the two sedans, we tested the LX-E. Ford calls it the performancemodel because it comes with styled aluminum wheels, 14-inch performance tires,sport suspension, four-wheel disc brakes and the 127-h.p., 1.8-liter 4-cylinder.

You have to put up with a modest groan when stepping away from the light, though it seemed less audible than the noise in a rival Saturn SL2 with 4-cylinder automatic.

When comparing the Saturn and Escort further, it would be a standoff inride and handling. Even with the sport suspension, the LX-E had thetraditional sedan tendency to lean in turns. Uneven pavement brought somejostling.

To compare the LX-E with a Japanese rival, we felt the Ford subcompacthas the edge in styling over the Honda Civic, which recently received newsheet metal to sport the same rounded look as all Japanese cars. The LX-E alsowould get the nod in room and comfort. The Civic would be a bit more nimble,the LX-E a bit more substantial.

The LX-E with automatic transmission has a base price of $11,933, about$2,000 less than a comparable Honda Civic EX sedan, which starts at $14,525.But the Civic has driver-side air bag and anti-lock brakes as standard, which would erase about $1,000 of Escort`s price advantage.

In addition to the typical power brakes and steering as standard, the LX- E features a couple clever items. One worth noting is an arrow in theinstrument panel pointing to the left to show the location of the fuel-filler door. That`s a handy feature for multiple-car families whose drivers mayforget what side the cap is on when pulling into the station. It`s also a plusfor Escort in the rental car market. It`s a handy item that probably didn`tcost Ford more than a couple pennies to add. Nice touch.

Also, there`s a little lip on the dash that`s just big enough to catchand hold the pen or pencil that goes astray when making a turn or applying thebrakes. Another nice touch.

The LX-E has some shortcomings, however, such as a mushy brake pedal with too much play and seat backs a bit too stiff. Unlike Saturn, the LX-E offersneither driver-side air bag nor anti-lock brakes.

And Saturn might gain another advantage this fall if rumors prove truethat the GM division will offer traction control in selected cars. Tractioncontrol is to getting a car going on slippery surfaces what ABS is to stoppinga car in a straight line on those same pavements.

Ford has been promoting a one-price line of Escorts from two-doornotchback to four-door wagon at only $10,499. That applies to LX models, butnot the LX-E, which starts at $11,933, or roughly $1,338 more than a SaturnSL2 sedan.

Our test car included such options as a preferred equipment package at$1,298, which consisted of rear-window defroster, air conditioning, tiltsteering, cruise control and tachometer; and a power equipment group at $305, which included power windows and door locks. Other options were power moonroofat $549, premium AM/FM stereo at $138, clearcoat paint at $91 and automatictransmission at $732. With options and a $375 freight charge, the stickertotaled $15,421 before option discounts of $ 744, which brought the price down to $14,677.

The LX-E is an economy car with stylish looks, a fuel-conserving sedanthat can cart four adults and their luggage or two adults and three kids plus their groceries. The LX-E would be a good choice for young couples whoseincome levels haven`t reached managerial status without advertising that tothe world by tooling around in a Hyundai.

second escort i owned. first was 1987 and it is still running on the road. this one is going to run for quite a few years yet as well. best little car that i know off and it just runs and runs.

August 9, 2007
By Rob from Minnesota
Owns this car

I've had this car for over 3 years now. It hasnt died on me. It's not the most comfortable car in the world, but it sure helped me through college. Very cheap. 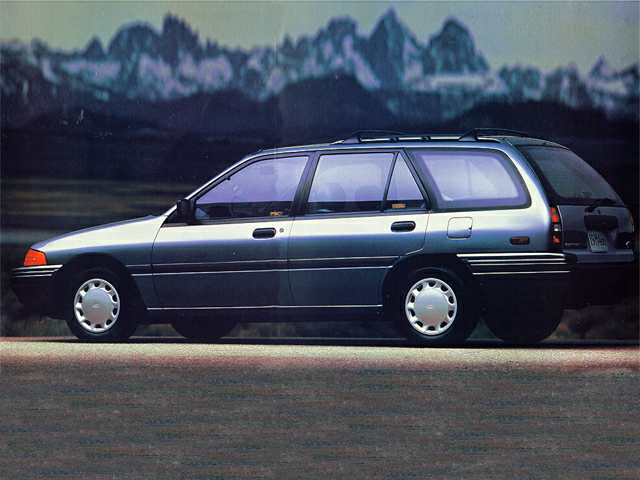