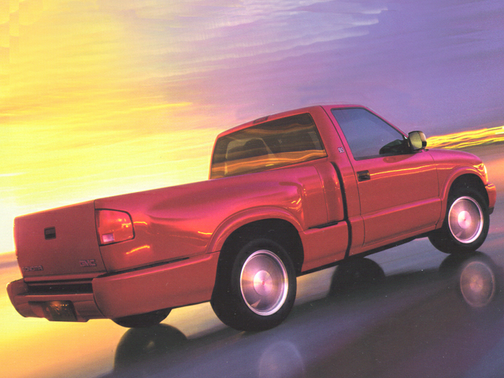 Our 2002 GMC Sonoma trim comparison will help you decide.

Vehicle Overview
A third door is now standard on all extended-cab versions of GMCs compact Sonoma pickup truck, which is the corporate kin to the Chevrolet S-10. All Sonomas for 2002 have air conditioning and a tachometer, and chrome grille trim has been added to the SLS trim package. The SLE trim level has been eliminated. The two-wheel-drive, regular-cab, long-bed truck has also been dropped, so all regular- and extended-cab Sonomas now have a 6-foot bed.

Sonomas sold in selected northern states now include a Cold Climate option group. New options include a bed extender for all models and a hard, lockable tonneau cover for Crew Cabs, which can also be fitted with Graphite leather-trimmed interior.

GMC added the Crew Cab body style for 2001 to match Chevrolets comparable S-10. Crew Cab models, which have four conventional doors that open to the front, have four-wheel drive and a 4.3-liter V-6 engine, but other Sonomas may be equipped with a four-cylinder engine. Sonomas come with either rear-drive or 4WD, and a manual shift or a four-speed-automatic transmission.

Archrival Fords compact Ranger, in extended-cab form, comes only with two narrow back doors that open toward the rear. Four-door Crew Cab body styles are available on the Dodge Dakota, Nissan Frontier and Toyota Tacoma.

Exterior
Sonomas come in three sizes. The regular-cab model is 190.6 inches long on a 108.3-inch wheelbase, while extended-cab pickups ride a 122.9-inch wheelbase and measure 205.3 inches long overall. Crew Cab models have the same overall length as the extended-cab versions, but because more space is devoted to the rear doors, the Crew Cabs cargo bed shrinks to 4.5 feet from the usual 6-foot length. Extended-cab trucks can be equipped with an optional third door, and 4WD extended cabs can have the ZR2 High Rider Package, which includes a ZR2 decal.

Payloads range from 1,111 pounds for the Crew Cab, which comes only with V-6 power and 4WD, to 1,389 pounds for a 4WD extended-cab model. Sonomas can haul trailers that weigh as much as 6,000 pounds, depending on the model.

Interior
Regular-cab and extended-cab models may have either a front bench seat that holds three people or a pair of bucket seats. Two folding rear jump seats are standard in extended-cab models, but the one on the drivers side is eliminated if an optional third door is installed. Sonoma Crew Cab pickups are equipped with the front buckets and a three-place rear bench. A stereo radio with speed-sensitive volume and an in-dash six-CD changer is optional in all models.

Under the Hood
A 120-horsepower, 2.2-liter four-cylinder engine is standard on 2WD models. A 4.3-liter V-6 power plant is standard on 4WD trucks and optional on 2WD versions. The V-6 engine produces 180 hp in the 2WD installation and 190 hp with 4WD.

A five-speed-manual transmission is standard, and a four-speed automatic is optional. However, the Crew Cab model comes with the automatic only. All 4×4 pickups use General Motors Insta-Trac system, which is engaged using a switch on the dashboard; an electronic transfer case permits shifting in or out of 4WD High on the move. Four-wheel antilock brakes are standard.

Powerful for the price

Extended cab has 3 doors and 4 seats. Both front seats are extremely comfortable and easy to sit in for a long ride. V6 has enough power to do burnouts on demand, sadly the steering wheel sits a little high and is not adjustable.

This ride is great meets my needs. Performance and drive breaks, lights Trailer lights ready to go.livd the color the tires how she goes in the sand.

The drive-train is rock solid, the interior design is cheap but effective. Good gas mileage and serves all of my purposes very well. I would purchase this truck again and again.

All model years for the GMC Sonoma 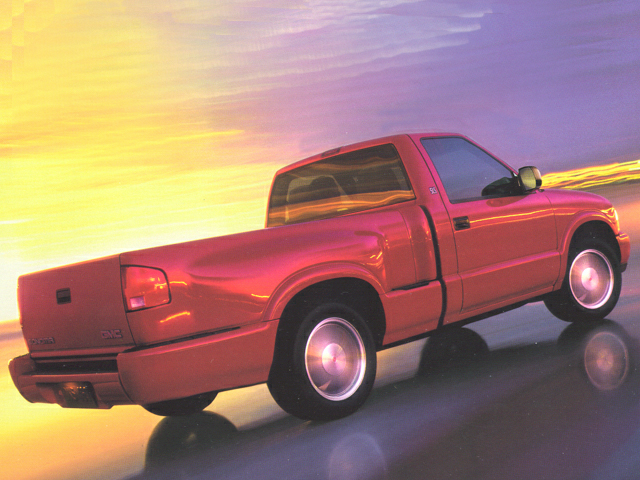