Our 2013 Kia Soul trim comparison will help you decide.

Despite its polarizing, too-young-for-some design, the 2013 Kia Soul seems to have just about everything you could need in a car, without inundating you with too many fluffy extras.

The five-seat Soul is available in three trim levels: base, Soul+ and the Soul! that I drove. Compare the three side-by-side here. If you’re in the market for similarly priced and body-type vehicles, you should also check out the Nissan Cube and Scion xB. See them side-by-side here. The Soul hasn’t changed much since last year’s model, but you can compare the two here.

EXTERIOR
The Soul really speaks for itself in terms of exterior design. When we first saw it back in 2008, it was aggressively styled with straight lines and square corners, standing out against a backdrop of progressively sleeker cars. With several other similarly shaped cars on the road today, the Soul is no longer the odd man out.

Its modernized-mail-truck look will either appeal to you or not. Between its shape, its features and its fun, youthful marketing, the Soul tends to appeal to a younger market, but quite a few Boomers are driving them, as well, thanks to the Kia’s retirement-friendly price tag and hip-high front seats, which make it easy to get in and out without too much strain or bending.

One of our reviewers came close to purchasing a Soul for her own small family, based upon its functionality and family-friendly budget, but she concluded she just couldn’t quite jump on the Soul train as a 40-something.

FAMILY-FRIENDLY FEATURES
The Soul’s boxy shape lends itself to practical interior cabin space. Backseat passengers not only have plenty of headroom, but also fantastic visibility due to the large expanses of glass and the slightly raised, theater-style rear seat. For young kids with a tendency to motion sickness, the extra-wide view might just keep you from having to stock your glove box full of gallon-sized Ziplocs.

The 39 inches of backseat legroom was plenty of space for all three of my girls’ (ages 8, 10 and 12) gangly, growing legs. That’s quite impressive compared with the Nissan Cube’s 35.5 inches of rear legroom. The Scion xB falls between the two with 38 inches of rear legroom. There was just enough seat width to squeeze all three of my kids in side by side, with just one of them in a slim Bubble Bum booster seat.

This extra backseat room, however, comes at the expense of cargo space; there’s just 19.3 cubic feet of cargo space behind the backseat. I was quite surprised by the tiny cargo space the first time I opened up the cargo door. I was expecting more of that Magic School Bus effect, seeing how large this small car otherwise feels on the inside. A few boxes of snacks and water bottles from the warehouse store were about all I could fit. Families with large strollers, wheelchairs or suitcases may need to rethink this car. Still, the Soul’s rear space beats the Cube, which has just 11.4 cubic feet of space. With the backseat folded, the Soul has 53.4 cubic feet of cargo volume while the Cube boasts 58.1 cubic feet.

Storage areas throughout the Soul’s interior helped keep my sometimes-chaotic family-car life a little bit more under control. A small center console up front was just large enough to stash my phone and snacks. In-door storage bins in all four doors, plus netted pockets on the front seatbacks, held all my other odds and ends.

As the driver, I had access to almost every feature that has become important to me while filtering out the noise of extra features that I don’t use (the lighted stereo speakers that flash along with the music were a gimmicky trick the kids thought was cool — and I turned off the second they stepped out of the car).

I appreciated the remote keyless entry, which is standard on the Soul! trim level, with the added benefit of push-button start that came as part of a $2,500 Premium Package. This package also gave my family two-tone, easy-to-wipe-clean leather seats that were heated up front for my driving pleasure. The standard Bluetooth technology was a cinch to pair with my phone, though the flip side was that it was also a cinch to pair with my 12-year-old daughter’s phone. This gave her the ability to play and replay “Party Rock Anthem” while driving through the school carpool lane, Chick-fil-A and more. Apparently, it was hilarious. Just ask my kids.

BEHIND THE WHEEL
The base Soul has a 138-horsepower, 1.6-liter four-cylinder. The Soul+ and my Soul! test car have an upgraded 164-hp, 2.0-liter engine. All Souls have front-wheel drive, and the base and Soul+ come with either a standard six-speed manual transmission or an optional six-speed automatic. The Soul! is automatic only. Mine had plenty of zip and zing for daily, around-town driving, even while in Eco mode, which can help drivers improve gas mileage. On the highway, however, you really have to nurse the Soul to keep it up to speed, unlike other vehicles that seem to practically drive themselves. Because it lacks cruise control, lots of highway driving in a base Soul would definitely become tiresome.

Also contributing to driver fatigue over long distances is the Kia Soul’s cabin noise. While the engine is really quite quiet, the Soul shows its budget pricing through lack of noise insulation. Road and wind noise are immediately apparent when driving this car.

My car’s EPA-estimated fuel economy was 23/28 mpg city/highway. The 2.0-liter with the manual transmission gets an estimated 24/29 mpg. The Soul+ with an automatic transmission is eligible for an optional Eco Package (not the Eco mode that comes in all Souls) with special tires and a provision that turns the engine off and on at stoplights, for an estimated increase of 1 mpg over the regular 2.0-liter automatic.

The base Soul, with its 1.6-liter engine, is rated 25/30 mpg regardless of transmission.

The Kia Soul’s tight suspension is fun and sporty-feeling around town, but its inability to absorb and recover from bumps became disconcerting at highway speeds. For example, when taking a curved ramp from one highway to another, the Soul jumped around a bit over the rough bump where the two connected, requiring me to focus and hang on more tightly to the steering wheel so it wouldn’t skip out from under me in the curve.

The Soul’s tight 34.4-foot turning circle made quick errands a blast, turning on a dime into tight parking spaces that others passed up.

SAFETY
The 2013 Kia Soul is an Insurance Institute for Highway Safety Top Safety Pick, having received the institute’s top rating of Good in front, side, rear and roof-strength tests. It hasn’t undergone the small-overlap front test. The National Highway Traffic Safety Administration gave the Soul an overall crash-test rating of four out of five stars.

As has been required since the 2012 model year, the Kia Soul has standard antilock brakes, electronic stability control and traction control. The Soul has standard dual advanced airbags in front, front-seat-mounted side-impact airbags and full-length side curtain airbags.

The Kia Soul! that I drove also had a standard backup camera display (it’s optional on the Soul+ and not available on the Kia Soul base model). While it’s not yet a requirement on cars, we anticipate backup cameras being mandated in the coming years, so having one standard in the Soul! added to my peace of mind in a house full of my kids, nephews, kids’ friends and pets.

For families installing child-safety seats, the Kia Soul’s lower Latch anchors are shallow within the seat bight, but don’t offer much clearance on the top and bottom of the anchor. This may make installing child-safety seats with rigid Latch hooks difficult. However, seats that use Latch hooks on flexible nylon webbing should be easier to install.

My two youngest daughters complained about the seat belt buckles in the Soul. Because they’re on floppy nylon bases, they have a tendency to slip and tuck themselves under the back of a booster seat when not in use. So when my daughter climbed in, it was tough for her to locate the buckle without climbing back out of her seat and moving the booster out of the way to find the buckle. Read our full Car Seat Check here.

So Happy I Purchased this Car!!!

Comfortable! Reliable! Cool style that My Cool Dad would have Loved!!! Hassan at Kia Springfield chose this car for me. He was 100 percent correct! I will never buy a regular car again. To be lifted off floor is fantastic. I feel so safe driving it. I highly recommend Kia Soul!!!

Very cute car, fun to drive, love the colored lights inside, perfect size and fit, just enough room for our family and amazing on gas!!

A good car to replace our 2018 Buick trade-in. The used 2013 KIA looks good, is comfortable, performs well, was mechanically checked, cleaned and detailed.

Rating breakdown (out of 5):
5 people out of 5 found this review helpful. Did you?
Show full review
See all 211 consumer reviews

All model years for the Kia Soul 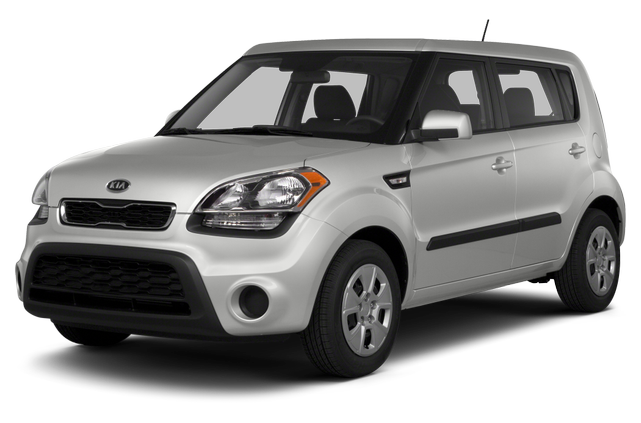 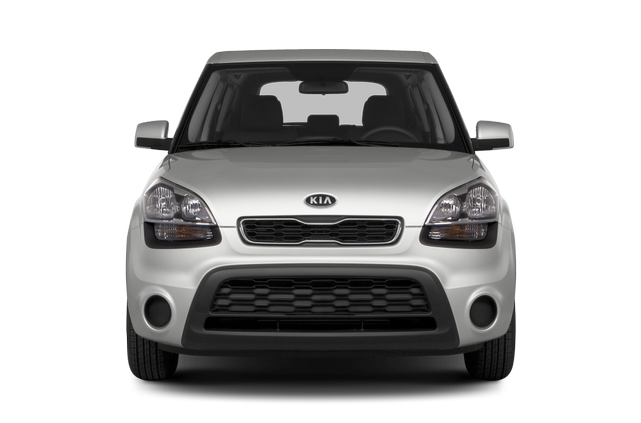 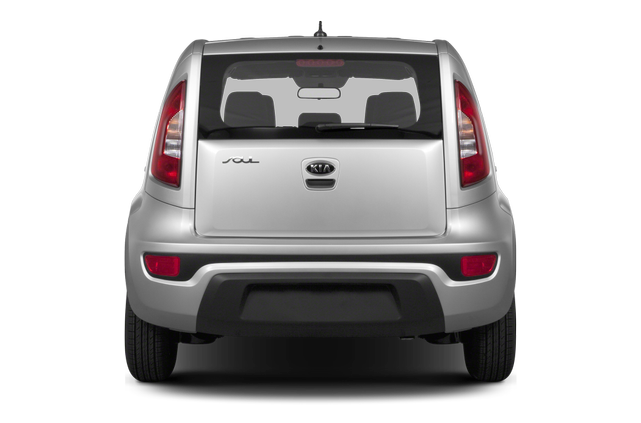 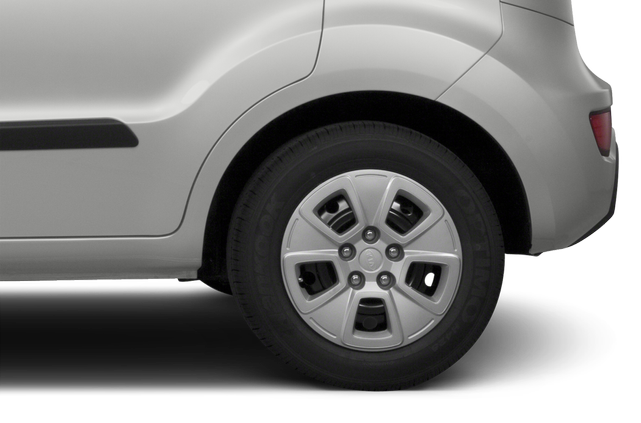 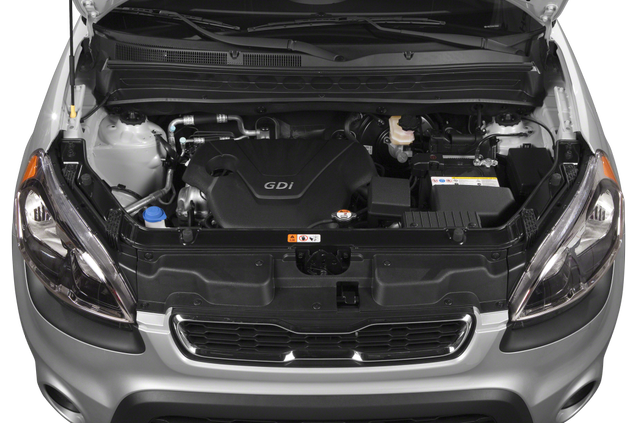 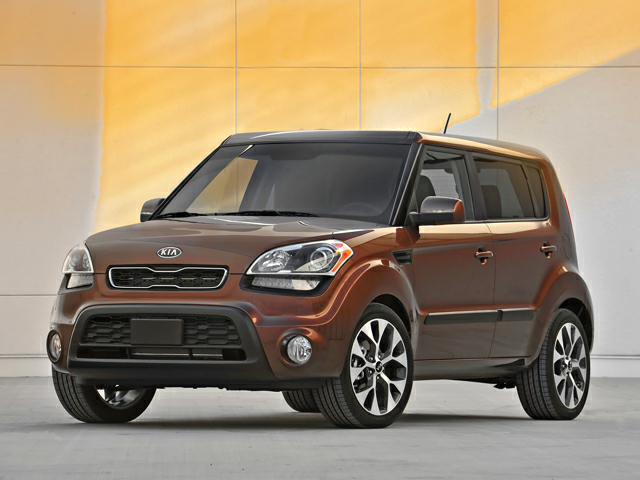 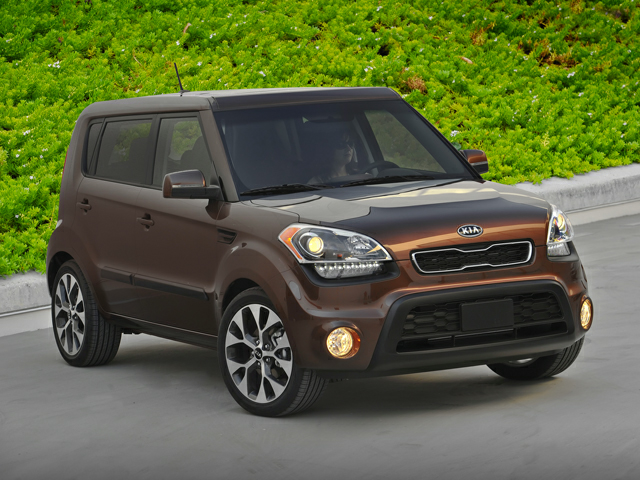 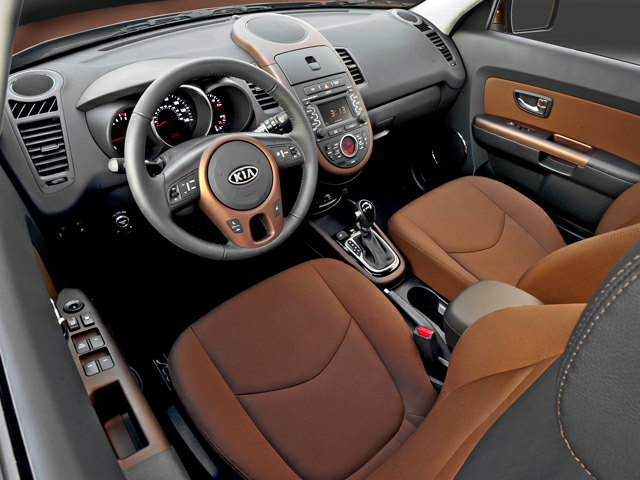 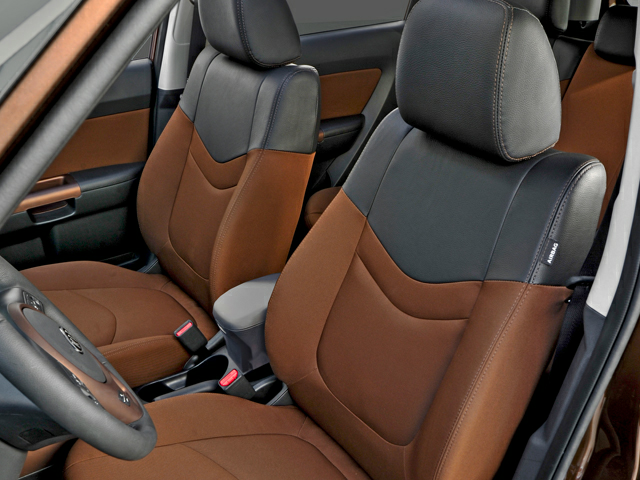 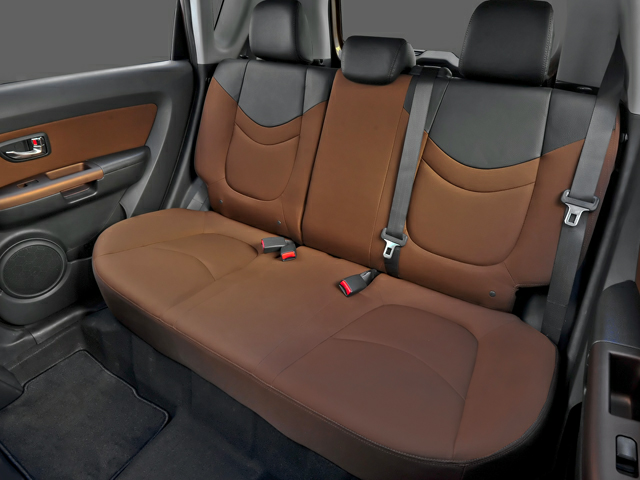 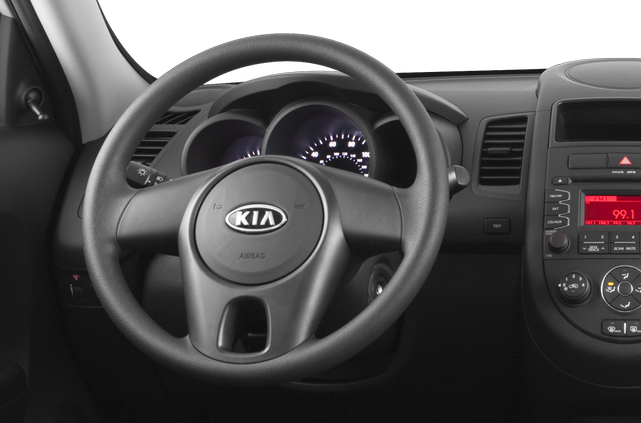 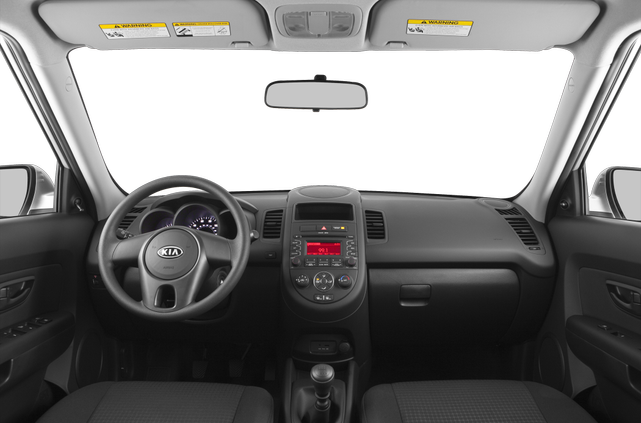 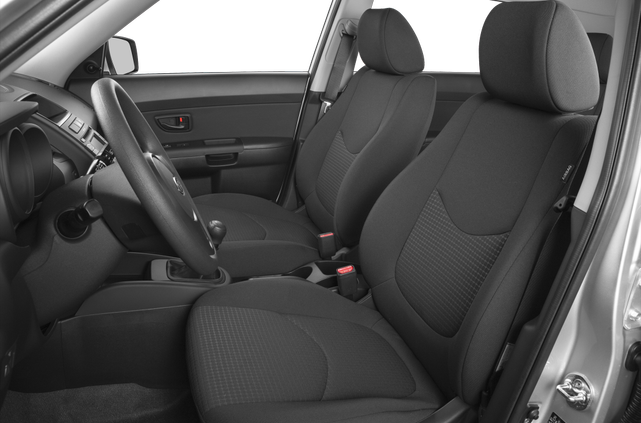 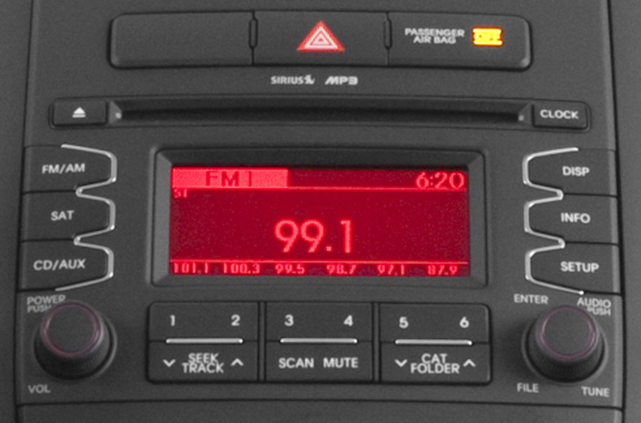 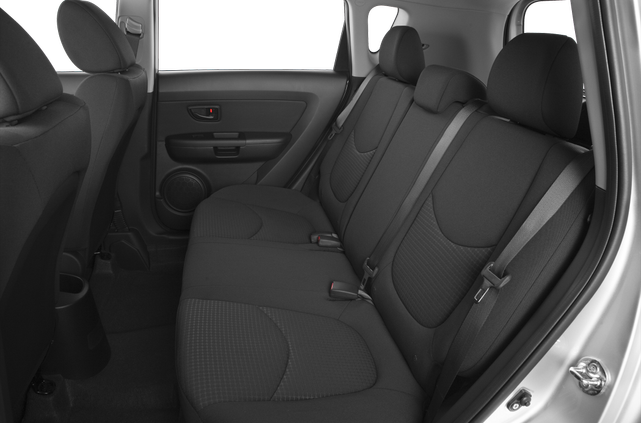 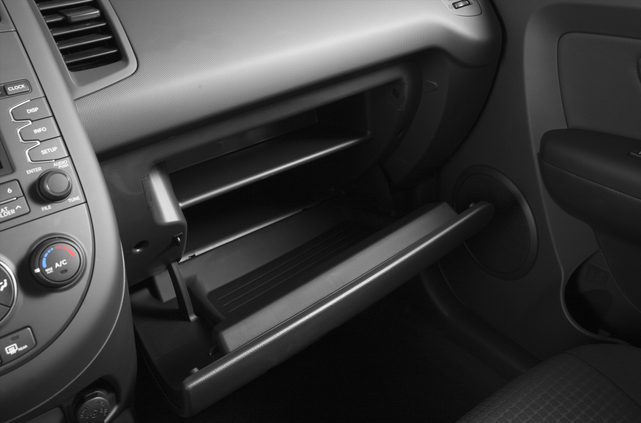 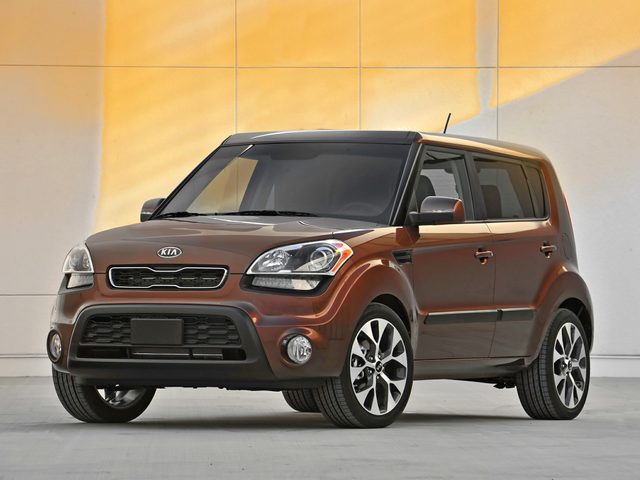 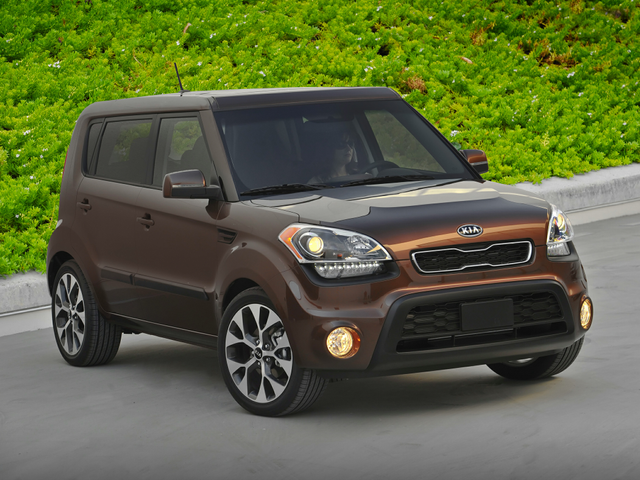 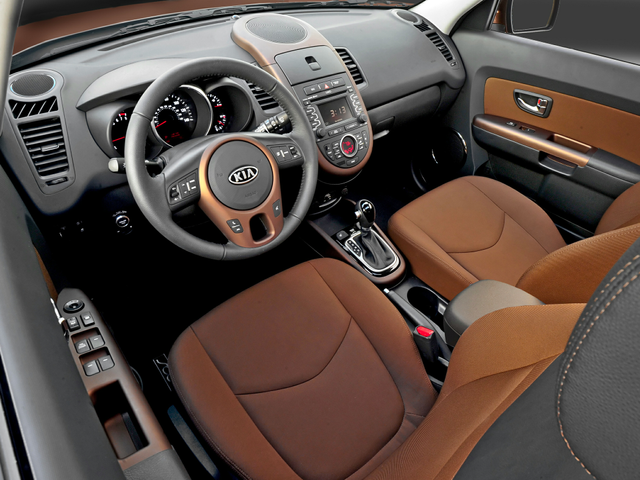 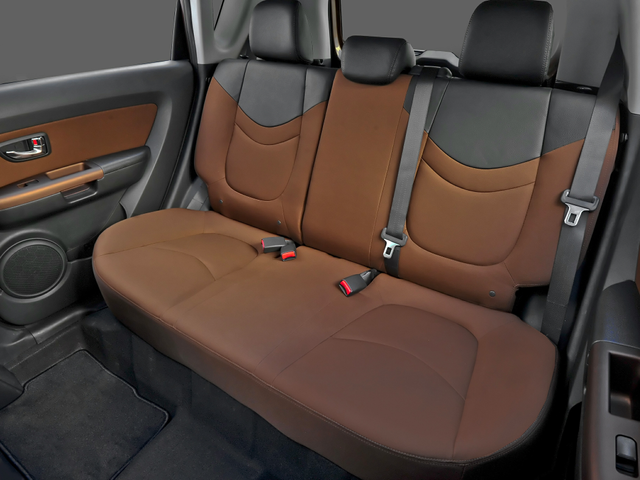