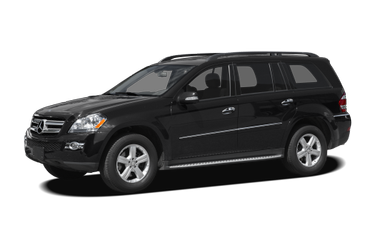 June 3, 2006
By Family guy from Sacramento, CA
Owns this car

We picked up our Premier edition GL last week.. WE LOVE IT!!! Total comfort for 7. Great Benz attention to detail. This is first true luxury full sized 7 passenber SUV.. very quiet and very comfortable ride..great cornering and much better milage then any of the competitors. They have thought of it all on this one with American buyers in mind. I can not think of one issue that is not just right. I would reccomend you get it fully loaded as the base model we test drove feels a little on the cheap side on the interior. We have the rear seat DVD etc which my kids love and works flawlessly (as compared to others we have owned). Sound system is awesome along with the Sirius and Ipod hook up makes this a true road trip car. Mercedes finally did it! We can take the whole family and more in one car!

Overall the SUV was impressive for its size. It had great pick up and speed...no problem passing around town or on the highway. At the test drive event my favorite part was the ABS simulation. At 60 mph I slammed on the brakes as if I was about to crash into someone and let go of the wheel completely. To my surprise, the GL450 stopped in roughly 100ft (not quite sure though) and perfectly straight. The wheel did not waiver or turn during the stop. Mercedes has also worked on a new traction control system that won't let the back end spin out in a turn. As hard as I tried, I couldn't do a donut in the GL450! Off road, the SUV felt smooth and strong. It was able to go in and out of a 30-40 degree angle of bank ditch(with the off road package option) easily. When making a 90 degree turn at roughly 40mph, the GL's back tires screached slightly. There was no swaying/roll-over feeling, and I felt confident and in control of the vehicle. Performance and safety I think are great. For the price, I thought there could have been a few more standard luxury features. A six-disk CD changer, sunroof, heated seats, and an upgraded sound system would have been nice standard additions for the almost $55,000 base price. Comparing the ML series with the GL, I was a little confused as to where the extra $15,000 played into the GL base price(besides the extra couple of feet and the engine). It seemed like all the interior features were the exact same...maybe I wasn't looking close enough :) Both the front and back seats were comfortable, and the interior decor was appealing to the eye. The COMMAND entertainment/navigation control unit was not hard to figure out. If you are technologically inclined, you'll be fine. It is similar to BMW's iDRIVE system which is a great convenience once you get used to everything being rolled into one dial. All in all, I give the GL450 a thumbs up. It's horsepower, torque, handeling, and luxurious interior were more than what I expected to find. I recommend driving one just to have a little fun.