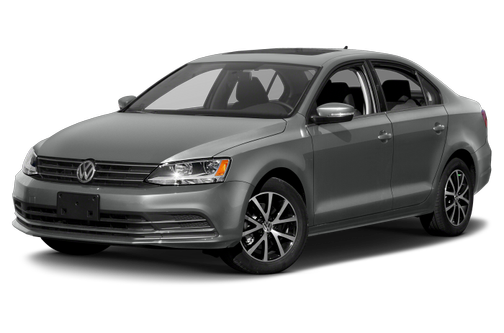 Our 2017 Volkswagen Jetta trim comparison will help you decide.

The verdict: The Jetta isn't the trendiest or flashiest compact sedan out there (by far), but it's one of the most satisfying to drive.

Versus the competiton: Almost a stealth entry in the segment, the Jetta SE quietly holds its own against many newer compact sedans.

Volkswagen’s Jetta compact sedan is like an old friend — familiar and aging well, but aging nonetheless. The current generation was launched with great fanfare as a 2011 model (VW had Katy Perry dance on the hood in New York City’s Times Square). It was a Jetta redone for American tastes (and sales), replacing the European model that had been a little too small and expensive for the U.S. market versus mainstream compact rivals.

That model’s cheaper interior materials and other cost-cutting factors were justifiably criticized for creating a car that was less special, yet “good enough” for Americans. But it brought more buyers, so maybe the Germans were right.

The car has improved a lot since then, though mostly in how it drives rather than what you see or touch. It’s good enough now for the budget-priced 2017 Jetta SE to have earned fourth place versus seven mostly newer rivals in Cars.com’s 2017 Compact Sedan Challenge. In that contest, it scored within the leader group that included 2017 versions of the Honda Civic, Kia Forte and Subaru Impreza over a second tier that included the Toyota Corolla, Hyundai Elantra, Mazda3 and Chevrolet Cruze.

The SE ($22,815 with destination as tested) was more fun to drive than most similarly priced rivals; it might have finished higher if it delivered a little more curb appeal.

If you liked the restrained, conservative look of the 2011 Volkswagen Jetta, you’ll recognize the 2017 — even if you have a hard time picking it out in a parking lot. The shape translates into an ample rear seat for two adults, rivaling the Impreza’s top-of-the-class backseat. At 6-foot-2, I could sit behind a front-seat occupant my size but wasn’t comfortable in the middle due to an intrusive console between the front seats. The console at least includes cubbies and 12-volt power for the rear, but sadly no air-conditioning vents.

The Jetta’s exterior shape also makes for a 15.7-cubic-foot trunk, rivaling mid-size cars (a 2017 Toyota Camry has 15.4 cubic feet, for example). The sedan’s trunk is well-designed for convenience, with a lid that pops all the way up when you press the key fob, plus both a center pass-through and a 60/40-split folding backseat for extra room.

If you were OK with the earlier Volkswagen Jetta’s nicely grained but brittle plastic pieces inside, you’ll be fine with the 2017 SE; the SEL and GLI have some softer-touch panels. I didn’t mind them, except for the hard door trim against my arm, but the overall design and trim looks dated versus newer, jazzier rivals. And as it has from the start, the interior also suffers by comparison to the love VW lavishes on its Golf’s cabin — the Jetta appears to be the neglected American stepchild.

The Jetta’s heavy, perforated imitation leather (V-Tex) on the seats (newly standard on the SE for 2017) looks more serviceable than the cloth you get in most compacts at this base price. I found it to be comfortable, but you’ll never mistake it for the Mazda3’s soft, is-it-or-isn’t-it faux leather. The two-tone cloth in the base S is your only other choice; even the pricey GLI doesn’t offer real leather.

The SE’s front driver’s seat is manually adjustable six ways, plus lumbar. I managed to find a just-so position, but it would have been easier to do if the big side levers were less clunky to operate (the SEL and GLI have a power seat). The Jetta SE’s front seats are also heated, a feature that was not universally standard in the budget-price Challenge cars.

The dash layout is simple and logical, offering buttons and knobs (thank you, VW!) that make common functions intuitive, unlike sleeker but harder-to-use systems that rely on small and distracting touch-sensitive panels and touchscreen menus, such as the Honda Civic’s. The Jetta, however, lags behind the Civic when it comes to front cabin storage, offering a just-adequate device tray and a small center console bin versus the Honda’s large and clever new configurable bin.

The Volkswagen Jetta is also notably lacking such pizazz as the Civic’s new digital color gauge display, the Forte’s sculpted dashboard and the Mazda3’s classy trim. Even Subaru, known for simpler designs, is looking more up-to-date with its redesigned 2017 Impreza.

One Jetta touch does stand above the crowd: its chunky, leather-wrapped, flat-bottom steering wheel with controls. It’s now standard on the SE for 2017, and it’s a joy to hold.

Thanks to changes in recent years, the Jetta’s engine lineup now is state-of-the-art. The 170-horsepower, turbocharged 1.8-liter four-cylinder that was added for 2014 powers the SEL; 2016 brought a sophisticated new 150-hp, turbo 1.4-liter inline-four for the base S and the SE we drove.

That punchy little turbo proves that an economy compact’s base engine doesn’t have to be coarse, noisy or unsatisfying. Its 184 pounds-feet of torque comes on with gusto at a low 1,400 rpm, and the six-speed automatic seems well-tuned to exploit its available power for a nimble feel. Shifts were positive, though kickdown to lower gears was sometimes a little rough. A five-speed manual (not tested) is available on the S and SE. Also not tested was the upscale GLI’s powertrain. That’s the performance choice: a 210-hp, 2.0-liter turbo four mated to a six-speed manual or six-speed dual-clutch automatic.

The SE with the 1.4-liter is the pick if gas mileage is a priority. With the automatic, it’s EPA-rated fuel economy 28/38/32 mpg city/highway/combined — substantially higher than the SEL’s 1.8-liter (available only with the automatic) fuel economy, which is rated 25/35/29 mpg. Compare all Jetta powertrains here.

The Volkswagen Jetta SE finished in the middle of the pack among eight rivals in our 2017 Compact Car Challenge real-world mileage drive without resorting to the less satisfying continuously variable automatic transmission used by three of them.

People don’t buy Jettas looking for sports cars, but the Jetta plays above most compact sedans, which generally range from acceptable to sloppy. It feels planted and composed in corners, and steering is precise and not overly boosted. In fact, for driving fun, the Jetta challenges the Mazda3, which is arguably the compact sedan to beat. It’s held back only by its high-mileage but low-grip Bridgestone Ecopia tires. And the Jetta is a more practical package, with much more rear-seat and trunk space than the Mazda.

The Jetta SE doesn’t make you pay in terms of ride comfort: Its suspension and high-sidewall 205/55 tires on 16-inch alloy wheels soaked up the bumps. The SEL gets 17-inch wheels, while the GLI comes with 18-inchers plus a sport suspension.

At Last, a USB Port

The new Volkswagen Jetta finally has an up-to-date multimedia system and a USB connection (as of 2016). If size matters to you, the 6.3-inch screen in the SE and higher trims is not as impressive as its rivals; six of our eight Challenge cars had 7-inch displays. But the Jetta’s screen is crisp and colorful, and it provides a sharp backup camera image. It’s positioned a bit low on the dash for my eyes, but the Jetta’s knobs for volume, tuning and buttons that supplement the touchscreen for most-used functions limit your need to look down.

Better still, the SE’s system is fast to boot up and quick to respond, and it includes standard Apple CarPlay and Android Auto smartphone integration (for navigation and more), as well as HD and satellite radio capability and support for lossless audio files. Move up to the SEL and you’ll get navigation and two more speakers, for a total of six. The GLI adds VW’s excellent Fender premium audio with eight speakers and a subwoofer.

One low-tech nit to pick: While the rest of the world has mastered designing a little door to cover the 12-volt power port, Volkswagen continues to plug the hole with a lighter-shaped (remember lighters?) plastic knob. If it rattles around while you use the outlet, don’t worry; you’ll eventually lose it. But there’s a lower-tech plus for those of you still carting around retro music or books on CDs: Jetta’s updated system still has a slot for you, bucking the trend.

The Volkswagen Jetta earned top scores in the Insurance Institute for Highway Safety’s crashworthiness tests, and a rating of advanced (out of a possible none, basic, advanced or superior) for its forward collision warning system with automatic emergency braking, which is standard on the SEL but not offered on the most expensive, GLI trim. This quirk is also true for the adaptive cruise control system. Neither is offered on the lower-priced S and SE, either. Blind spot warning and rear cross-traffic alert are standard on SE and higher trims for 2017. All models have a backup camera standard.

Some of the Jetta’s compact sedan rivals offer wider availability of forward collision systems; Toyota has it standard on every Corolla and will expand it to most of its vehicles by 2018. The Civic, Mazda3 and Forte all had such systems on cars under the price cap of $23,000 for our 2017 Compact Car Challenge.

The Jetta holds up well against mostly newer competitors that deliver more style and more upscale interior bits (at least for this category). The Jetta delivers more driving satisfaction than most, plus a grown-up backseat, a mid-size car’s trunk and newly competitive multimedia technology. Compare it with compact sedan sales leaders, including the Civic, Corolla and Cruze, here.

As for which Volkswagen Jetta offers more value, the Challenge showed the SE to be a solid choice among affordable compacts. But the $3,000 bump from an SE with 6-speed automatic transmission to an SEL (automatic standard) seems a reasonable trade up for more power, added interior conveniences and, most important, a competitive suite of electronic safety technology. The sporty GLI, however — at around $30,000 — seems a little rich despite having more features and performance. It has a lot of competition at that price, too, including the well-equipped, more sophisticated and sportier 2017 Volkswagen Golf GTI.

This car is more comfortable than any car I’ve owned. It is good on gas as well. I’m glad I took the time to research this car. It looks as though I’m getting a good bargain for my money spent. My previous car was an Acura TL.

With both factory and dealer offering impressive lat sumer discounts, I wrote a check for just under $14.4 - - - - tax, license and doc fee OTD. Fuelly has me at just under 41 MPG in 155 trips to the same Chevron pump............ There have been zero issues with this car since delivery (Brand new!!)

I absolutely love my ❄️

I call my vehicle snowflake, and we have put over 20k miles within a years. Definitely growing a personal connection with my Jetta. Definitely the joyride car.

Rating breakdown (out of 5):
0 people out of 0 found this review helpful. Did you?
Show full review
See all 256 consumer reviews