The long-awaited successor to the 1 Series M coupe is finally here. The BMW M2 joins the 2 Series lineup for 2016 with track-ready styling, more power than its predecessor and a luxurious cabin.
Exterior
The M2’s styling fits in with the rest of the lineup; it wears the 2 Series’ kidney grille, short front overhang and long hood. Many M-specific components give it an overall beefed-up look, however: It adds an aggressive-looking, deeper front bumper with three large air dams; side skirts; and flared fenders. In back, there’s a spoiler and a rear bumper with an integrated air diffuser and quad exhaust ports. BMW says the M2’s body additions make it more aerodynamic than the 2 Series and drag is reduced by 35 percent.

Color choices include Long Beach Blue Metallic, Alpine White, Black Sapphire Metallic and Mineral Grey Metallic.
Interior
Navigation is standard; M-specific interior features include front sport seats in black Dakota leather with blue contrast stitching, a branded three-spoke steering wheel, specific analog gauge cluster, carbon fiber and Alcantara simulated suede trim throughout the cabin as well as loads of M badges.
Under the Hood
The M2 has more oomph than the 1 Series M. Power comes from a version of the M235i’s turbocharged 3.0-liter six-cylinder engine. In this application, it’s twin-turbocharged and tuned to make 365 horsepower and 343 pounds-feet of torque, up from the M235i’s 320 hp and 330 pounds-feet  of torque and the 1 Series M’s 335 hp and 332 pounds-feet.

High-performance brakes and a sport-tuned aluminum-heavy suspension are standard. Fuel-saving automatic stop-start engine technology and a regenerative braking system are also standard, but official fuel economy figures aren’t out yet.
Safety
Optional safety equipment includes the Collision Warning and Pedestrian Warning with City Braking system, which will automatically stop the car if it detects that a collision with a person or car is impending. Lane departure warning and a Park Distance Control system, which assists drivers with parking maneuvers in Reverse, are also available. 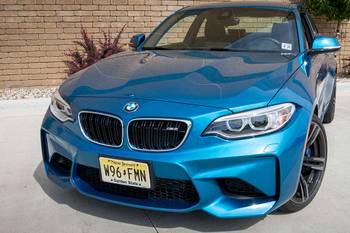 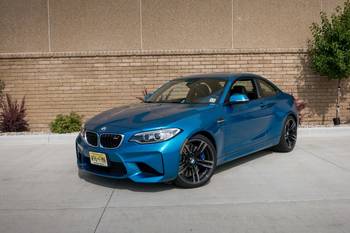