CARS.COM — You can mitigate that pesky over-the-shoulder blind spot by properly setting your mirrors, but it always helps when a car has good sightlines to begin with. Five years ago at the Chicago Auto Show, we documented visibility in a slew of small SUVs. Of the 10 we checked out, the Subaru Forester’s narrow pillars and tall windows made it the clear winner. The cavelike Nissan Rogue, meanwhile, pulled up the rear.

The ever-moving target for aerodynamics is responsible for pulled-forward windshields and rakish rooflines, but cars can still be fuel-efficient — and meet roof-strength crash tests — without being a visibility nightmare. Case in point: The Honda Accord sedan ranked second in a mileage drive among its family-sedan competitors, thumped the group in our driver-visibility rankings and achieved top roof-strength scores from the Insurance Institute for Highway Safety. See? You can have it all.

What about these SUVs? The whole class has been redesigned since our last checkup, and I took my iPhone to investigate the mainstream players — all 2014 models — during the auto show. Fuel economy and all-wheel drive aren’t the only important factors in choosing a crossover SUV. Check out my vehicle grades from best to the worst.

2014 Subaru Forester: B+
The Forester still earns its stripes, but visibility took a hit versus the prior generation. The narrow pillars flank tall windows, but the outboard head restraint ballooned with Subaru’s 2014 redesign. It still aligns with the D-pillar, but the forward edge encroaches on the rear-quarter window. Fortunately, that window’s still huge, and the D-pillars remain easily the narrowest in this group. The rear window is wide, too, but the ceiling-mounted center seat belt still bisects the view. Mount it on the seat already, Subaru.

2014 Volkswagen Tiguan: B
A large rear window and tall side windows make up for the Tiguan’s chunky D-pillars and rear head restraints. But those pillars squeeze the rear-quarter windows, which hide behind deep (and obstructing) frames. A low belt line keeps all the windows tall, at least, and the nearby rear window demonstrates the Tiguan’s overall length; at 174.5 inches, it’s the third-shortest SUV in this group. The head restraints fold down (inset), which clears up even more of that big rear window.

2014 Ford Escape: B-
The prior, boxier Escape scored a little better with visibility thanks to smaller head restraints and a wider rear window. Its successor has bigger head restraints and a narrower rear window, at least from the driver’s seat. The restraints fold down (inset), but that only trades one slice of the rear-quarter window for another. Still, the Escape’s belt line ensures a tall rear-quarter window, and the center seat belt stays out of the way. Things could be worse. How much worse? Read on.

2014 Honda CR-V: C+
The CR-V’s C-pillars remain manageable, but the D-pillars are substantial. Fortunately, the rear head restraints fold completely out of the way (inset), clearing up the tail end of the rear-quarter window. But the Honda CR-V’s belt line kicks up, which reduces the window’s usefulness and impacts the blind spot. It’s better than most, but the D-pillar still swallows so much of what it could have been. Sigh: So close, yet so far.

2014 Toyota RAV4: C+
The RAV4’s rear window offers improved sightlines versus the CR-V’s, and the spindly C-pillars block little. Still, the swept-forward D-pillar obscures a lot, and the folding head restraints (inset) do nothing for over-the-shoulder visibility. The last RAV4 had narrower D-pillars and nesting head restraints that stayed completely out of the way. Its successor has lost a step.

2014 Jeep Cherokee: C
The Cherokee’s smallish head restraints hold promise, but the bulky D-pillars engulf a big chunk of your view. So does a pesky panel in the rear side windows, which dwarfs similar panels in the Honda CR-V and Ford Escape to make for a supersized C-pillar. Pinned behind it, the rear-quarter window is tall but narrow; it’s a modest portal at best.

2014 Mazda CX-5: C
The CX-5’s rear head restraints align nicely with the D-pillars, and the belt line and roof combine for tall second-row windows and narrow C-pillars. Still, I wish the triangular rear-quarter window opened up more at its base. (Notice a theme here? The Escape and Forester are the only contenders with truly usable rear-quarter windows, and they scored well.) Another downside: The rear window is unobstructed by head restraints or a middle seat belt, but it’s still small.

2014 Mitsubishi Outlander Sport: C
The Outlander Sport rates average among crossovers for rear visibility. The rear-quarter window widens at its base, which allows a better peek at nearby traffic — particularly cars that sit lower in your field of view — but it’s still narrow overall. What’s more, the D-pillars and blind spots are substantial, and despite the Outlander Sport being shorter than the Tiguan, its rear window looks smaller.

2014 Nissan Rogue: C
The Nissan Rogue improves on its predecessor’s bunkerlike sightlines, but it has a rear side window panel problem similar to the Jeep Cherokee. The C-pillar fans out near its base, and its thick frame obscures some of the rear-quarter window. The rear-quarter window is large enough, as they go, but it sits high. And the rear window is big but distant, belying the Rogue’s 182.3-inch length — the second-longest in this group. The Rogue also offers a third row which when raised also obstructs the rear view with tall headrests.

2014 Kia Sportage: C-
Holy C-pillar, Batman! The Sportage does away with a rear-quarter window altogether, fusing the C- and D-pillars into a stretch of interior plastic with all the blocking power of a congressional filibuster. The ceiling-mounted seat belt worsens this legislative mess, chipping away at the already-small rear window. The blind spots are huge. At least the pillar strategy allows for long backseat windows, which offer a good view before the plastic begins.

2014 Hyundai Tucson: D+
The Sportage’s corporate sibling, the Hyundai Tucson, offers a Hobson’s choice: Take a useless rear-quarter window (the Hyundai) or nothing at all (the Kia). In the Tucson, the window is purely ornamental — a dollop of glass as useful as a parasol in a hurricane. The ceiling-mounted seat belt cuts down some of the rear-window view, too, and the panel in the backseat side window adds insult to injury. The Hyundai Tucson would be a clear loser, if it wasn’t for the …

2014 Chevrolet Equinox: D
There are usable rear-quarter windows (Forester, Escape). There are small ones that still help a little (most of the rest). And then there are those in the Tucson and the Equinox. The Equinox might show more, were it not for Ironman’s helmet — er, a head restraint that sits in the way. The glass that remains sits between columnlike C- and D-pillars. The saving grace is a decent-sized rear window, but everything else makes the Equinox an arch nemesis of visibility.

Editor’s Note: Your specific view will depend on how you position the driver’s seat. I’m 6 feet tall; I positioned the seat where I’d sit to drive in all the SUVs and shot an over-the-shoulder view from the driver’s-seat head restraint. A caveat for the Ford Escape: Ford’s two examples at the auto show were depowered with the power driver’s seat lower and more reclined than where I’d sit, so I estimated the camera position accordingly. In all the SUVs, I put the rear seats all the way back if they had a sliding adjustment. If they reclined, I positioned them where I’d comfortably sit as a passenger. I deployed any ceiling-mounted middle seat belts and lowered the rear head restraints to their base, but I didn’t remove them, which poses an obvious safety hazard. 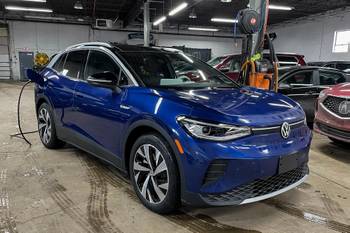 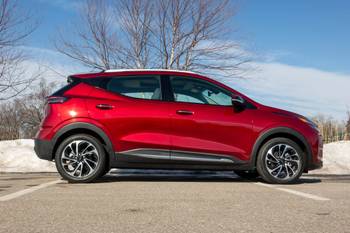