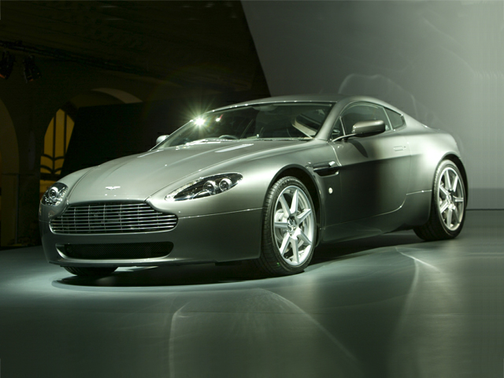 THE V8 Vantage ushers in the era of the affordable Aston Martin, which seems a little like cognac-in-a-box or fast-food truffles — a rare and exclusive thing awkwardly commodified.

If only I’d dumped that Google stock when I had the chance.

What’s at stake here is the fragile, don’t-breathe-on-it delicacy of Aston’s brand mystique, which for most of its 91-year history has been rooted in a kind of tragic heroism. The company, based in dear old Newport Pagnell in Warwickshire, has been in receivership seven times — now there’s financial planning I can relate to — staggering from one crisis to another while occasionally producing extraordinary cars, the most famous of which is James Bond’s 1964-ish DB5 and the most beautiful of which is the Zagato-bodied DB4GT. Aston Martin’s brand mythos was built on selling a handful of pretty, and pretty unreilable, cars at unspeakable prices. Now that’s conspicuous consumption.

Fast forward to 2006. Aston Martin is the wholly owned fiefdom of the Ford Motor Co. Under the whip hand of Ulrich Bez — who you may have gathered from the name is about as British as the Berlin Philharmonic — Aston Martin has been transformed into a real, honest-to-God car company, that turned its first profit ever in 2005. With three fresh and splendid products in the portfolio — the Vanquish, the DB9 and now the V8 Vantage — Aston expects to sell more than 5,000 cars worldwide, more than Ferrari’s annual beneficence.

But what of the marque’s doomed gallantry, its reputation as the Masada of the car industry? Can Aston Martin’s mystique survive success? Oh well. I suppose if the company can weather the ’90s — when it passed off tarted-up Jaguars as Astons — it will survive the V8 Vantage.

It sure is a looker. If crossbows fired bolts of molten envy, this is what the projectile would look like. Set deep in its stance, malevolently wide and low with a squinting greenhouse, the car is so dastardly looking it should be twirling a mustache.

Based on a short-coupled version of the DB9’s glued-and-riveted aluminum frame, the V8 Vantage is a foot shorter (172.5 inches) over a wheelbase trimmed only 5.5 inches (102.4 inches), giving the car indecently brief front and rear overhangs. Stylistically, the V8-V is so similar to the DB9 that Henrik Fisker, former Aston design chief, ought to be getting royalty checks.

Similar, but not the same. Much of the DB9’s sinuous amplitude has been ironed out of the V8-V’s lines, and the car’s straight-ahead mission is emphasized by a contour line paying out like a sheet metal contrail along the doors. As compared with the elegantly attenuated 2+2, the V8 Vantage looks fierce, clenched in four-fisted rage. Evil, EVIL, I tell you! If you sell your soul to the devil, this is the car you get as a signing bonus.

At night, when the headlamps’ star-white LED marker lights and lava-red LED tail lamps are aglow, the mere sight of the V8-V will knock crows off power lines and cause pregnant cats to throw their litters.

With the V8 Vantage, Aston Martin is going after the Porsche 911 — sort of. The worldwide production target is about 3,000 cars annually, a third of which are headed for the States, or about 1,000 cars. Porsche sold 10,000 911s of various flavors in the U.S. last year. Needless to say, the V8 Vantage isn’t causing anyone in Zuffenhausen to dive for the bunker.

Also, the Aston’s price point is curiously betwixt and between the various Porsches. In performance, the 380-hp car is closest to the 911 Carrera S, with a suggested retail price of $81,400. Which is to say, the Aston buyer will pay 40 grand more and go no faster. In price, the V8 Vantage is closest to the 2007 Porsche 911 Turbo, which will sell for $122,900. However — and just judging by the numbers — the Turbo will handily mop road and track with the Aston.

So why would anyone pony up the six figures for the Aston? Because you’re not likely to see five others at the Beverly Hills Whole Foods. Los Angeles is overrun — positively lousy — with 911s. Astons are still special, rare, exotic, devoutly to be cherished. Like funny Lutherans.

And besides, what you might surrender at the extreme flaming edges of performance vis-à-vis the Porsche 911 can only be measured in tenths of a second, while Aston’s vainglorious compensations come by the tankerfull.

Not to say that the Aston is a dog. Powered by a 4.3-liter V8 (the Jag 4.2-liter mill slightly stroked, with freer-breathing cylinder head, intake and exhaust plumbing) and stirred with a conventional six-speed ZF transmission — no prissy paddle-shifters here — the Aston has the spark and bite of a proper sports car. With 302 pound-feet of max torque, 75% of which is available at 1,500 rpm, it’s quick — 0-60 mph times hover in the 5 second range — but by no means overpowering. What it is instead is effortlessly driveable, well-rounded and complete, pulling hard in every gear right up to the 7,000 rpm redline, which is announced by both the counter-clockwise rotation of the tach needle and a red indicator light, as in the cockpit of a race car.

Could it use 50 more horsepower? Couldn’t we all? But in the nonce, the V8 has chops enough. PS: An “S” edition — with 50 additional horsepower as well as a paddle-shifted gearbox — is in the product plan for next model year.

Once I ciphered the embedded aluminum handle, I swung the door open (it tilts up slightly on its hinge) and squared my butt into the deep-socketed leather seat, which seemed to close around me like Kong’s fingers clutching Naomi Watts. The interior is lovely, serenely technical and focused. The cockpit furniture is borrowed whole cloth from the DB9, including the glass starter button centered in the dash. Not a bad thing. The lathed-alloy instrument pack is a treat, especially at night, lighted with tiny pin spots embedded in the overhead binnacle. Unlike the DB9 — which has vestigial rear seats — the V8 Vantage has a parcel shelf that can be accessed through the hatchback.

Here and there are intimations of cut-rate Aston-ness. The central console is an anodized alloy — no wood option — and to the touch feels a bit less elegant than it ought to. Then there are the obvious paw prints of Ford’s corporate cost-cutters — the outside mirror switchgear and nav system is straight out of Volvo. Also, the V8 Vantage is pretty stingy in the standard equipment department: 19-inch rims, HID headlamps, nav system and full leather trim are all cost-added options. All that being less, that seems lèse-majesté of the Aston brand.

To tell the truth, I was highly skeptical of this car, and this skepticism endured right up to the moment I pushed the start button and the V8 lit with a cold cough and fell into a husky purr. I heaved the stiff clutch in, slotted the gearshift into first and pulled away. Murmur, murmur, murmur … and then, Wow! When the revs rise above 5,000, tumble flaps in the exhaust system roll over and the car’s vocal cords start to glow like hot iron.

The layout of the car is properly “front-mid mounted,” which is to say the V8 is situated well behind the front axle centerline. It’s also plumbed with a dry-sump oiling system, which lowers the engine and thus the center of gravity. The rear transaxle is also situated between the axles to improve cornering behavior. Planted on the optional 19-inch wheels and tires, with its center of mass skimming the road, the Aston corners with flawless, dial-a-smile grip and stance. It’s supremely light and nimble, yet utterly locked down, as neutral as beige carpet. Steering is pin-sharp and reactive. The brakes come on smooth and strong. The low-profile tires — combined with stiff double-wishbone suspension and the resonant quality of the aluminum chassis — do create some zing at certain low speeds on broken surfaces. But overall, the ride is compliant enough to be survivable in urban driving.

A cheaper Aston Martin? Isn’t that an oxymoron, like edible haggis? And yet, somehow, this car feels right. There is no give, no flex in this chassis anywhere. The steering column feels like it’s embedded in concrete. Everything has a to-the-bone integrity. The best thing I can say about it is that it feels like a six-figure car.

They sure don’t build Aston Martins like they used to, and for that we can all be grateful.

I have owned a DB9 for years and love the car. I had a V12 bias so did not consider the Vantage. I finally bought one because I wanted a manual transmission. Should have bought one sooner, what a fun car. It is totally different than my DB9, much more fun to drive and the sound from the engine as you run through the gears is amazing. Service is a bit high but on a par with most exotics and drastically less than Ferrari maintenance. Reliability has been excellent, it is my daily driver. If you get a chance to buy one do it.

PRETTY TO LOOK AT, BUT IT STOPS THERE...

October 28, 2009
By NEWPORT BEACH DOC from SoCal
Owns this car

Great looking car, Ford engine, many Volvo parts also. "Sport Shift" transmission is a total abomination! Hedious service costs. Too heavy for a real performer. Terrible fuel ecconomy, means that your always looking for a gas station. Leather dash is guranteed to shrink and pull. This could have been avoided by allowing more material to allow for inevitable shrinkage. Bad visibility

Rating breakdown (out of 5):
2 people out of 5 found this review helpful. Did you?
Show full review
4.7

A beautiful car with many highpoints

November 17, 2006
By Shamu from Los Angeles, California
Owns this car

This aston martin is a very nice, comfartable, fun, beautiful, and expenive car. For the price its performance is low although it is not bad at all. It is a beauty with many amazing features you just wouldnt find in many other cars. It is a very loud car, which i fing to me one of my most favorite parts of the car, the sound of the engine raoring with make you say wow every time.It is a small car but i am a huge 6 foot 2 guy and i fit just fine. But if you are looking for a fast car but not willing to pay 130 grand don't think about it. I am not saying it isn't fast(it is) but there are other cars for much less that perform better. But i would have to say this car overall is the best car out there unless your willing to shell out 200 grand or more.

Rating breakdown (out of 5):
3 people out of 3 found this review helpful. Did you?
Show full review
See all 4 consumer reviews

All model years for the Aston Martin V8 Vantage 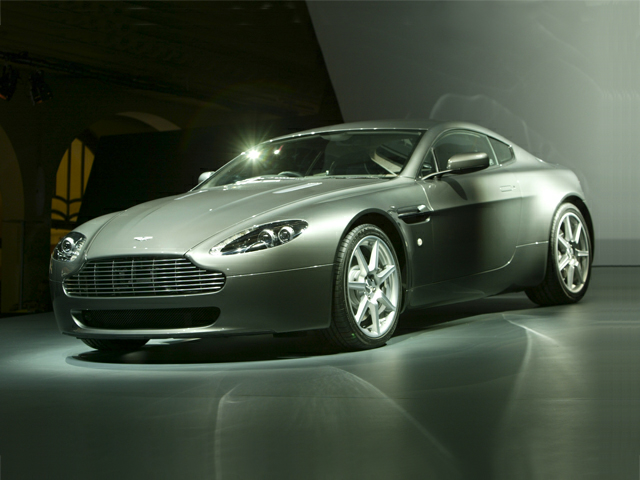 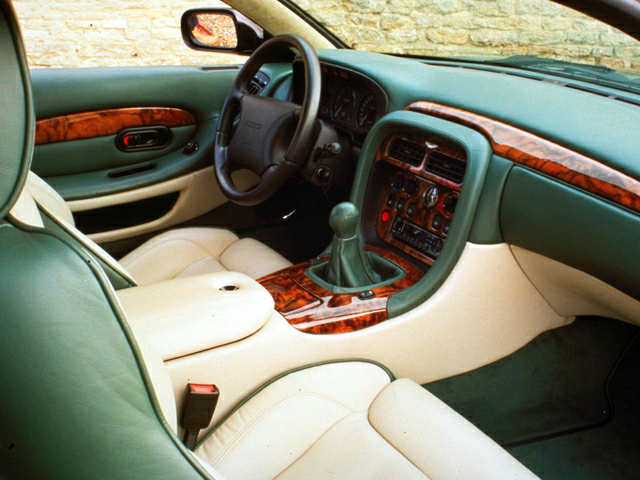 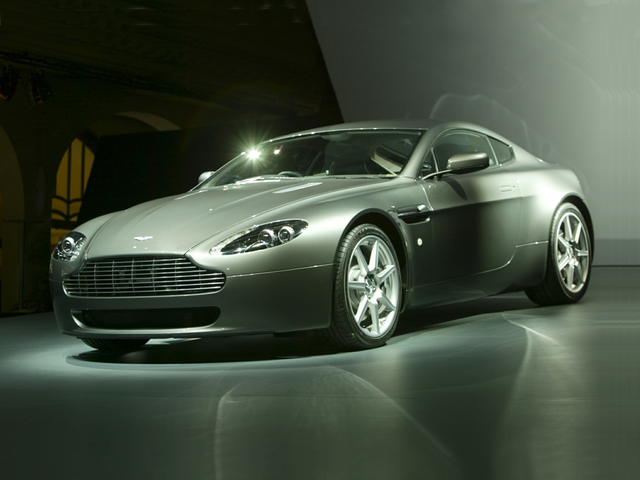 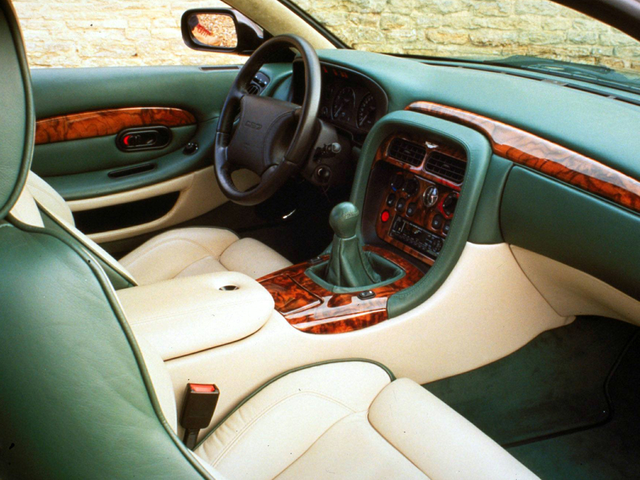