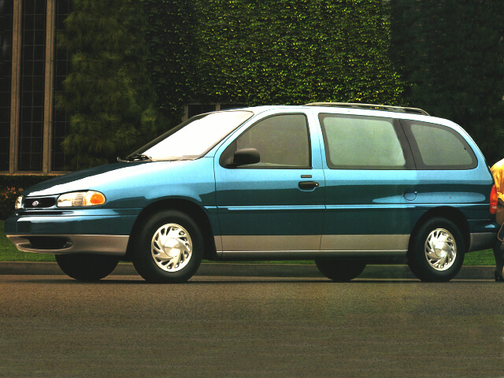 Our 1996 Ford Windstar trim comparison will help you decide.

To really test a minivan, you need to load it with people and possessions and drive it somewhere. That’s just what we did with the 1996 Ford Windstar LX. Grabbed the kids, the grandparents and eight pieces of overstuffed luggage and took a long hike from Atlanta to the South Carolina coast. (OK, so we needed a vacation, too.)

The key questions: How did the Windstar’s revised 3.8-liter engine perform and how aggravating was the lack of a fourth door – something that competitors like Honda and Chrysler have over Ford?

He: After the first hour in a Windstar crammed full of people and suitcases, I remembered just why I swore off taking family vacations in minivans some 10 years ago. After the second hour, most of which was spent dashing on and off the freeway and merging with all those monster rigs, I began to really appreciate the lustier 200 horsepower engine in the ’96 Windstar LX, which is up nearly 30 percent from last year. It’s also reassuring to have standard antilock brakes and, if you want extra peace of mind, optional traction control.

She: Well, at least you weren’t shoehorned into the third seat like I was with my mother. I know we got stuck there because we were the shortest of the six. Great point about the Windstar: That third seat can fold or slide forward to accommodate luggage. The down side: When you’ve got a lot of luggage, you’re not left with a lot of legroom in that third seat, especially if you’re adult-sized. My mother was in a better position because she was on the end and could stretch out her legs, but I did a yoga-style sit for five hours. Ouch!

He: In all fairness, I can’t imagine too many families who would perform the kind of acid test we did very often in their personal vehicles. And I don’t mean sticking my mother-in-law in the third seat. The extra complement of people and bags gave us a pretty good chance to see how the new engine performs under a full load. What was even more remarkable was our fuel economy – well over 20 miles per gallon averaged over 500 miles.

She: When you finally gave me the wheel I enjoyed how easy the Windstar was to drive and park. It’s slightly bulky in appearance, but don’t be fooled. I wedged it into the tiniest spaces in shopping malls with no problem.

He: You never seem to have a problem in shopping malls.

She: How would you even know that? You usually take a nap while I shop. And speaking of snoozing, that brings me to another important point about our experience in the Windstar. I was struck by how much sleeping we all did in those passenger seats. That is a testimonial to the minivan’s smooth ride. The gas-pressurized shocks at all four corners really iron out the bumps.

He: You always have to throw in a metaphor involving housework, don’t you? That reference to ironing makes me nervous.

She: Just because you’re ironing impaired.

He: I can’t help but think the Windstar’s biggest remaining drawback is the lack of a fourth door – which now seems to be an incredible oversight on Ford’s part. I hear they’re trying to stretch the driver’s door on next year’s model so you can squeeze into the rear, but I don’t really expect Ford to offer a genuine four-door version of the Windstar much before 1999. That seems kind of dumb, considering nearly everybody else on the planet will probably have one by then.

She: Some younger families don’t like that optional fourth door. What I don’t like is that you don’t get much of a price break over the Windstar’s four-door competitors like the Honda Odyssey and the Chrysler models.

He: I probably wouldn’t squawk so much about the $27,000 sticker if it included that fourth door, considering all the features you get with the Windstar LX. But you can get a very nicely equipped Odyssey EX four-door for about the same money.

She: Yeah, but you can’t get a six-cylinder engine in the Honda nor could you fit all six of us and our luggage in the Odys What I did admire about the Windstar is the fact that it gives you a very friendly family environment, almost reminiscent of a bigger house. We hauled volatile cargo – teen-agers, parents and grandparents, including a grandpa with a bad knee – and not one fight occurred. I chalk that up to little amenities like cupholders at each seat and an optional headphone jack and climate controls for rear passengers. I also like the fact that the floor of the Windstar was low, and that made for easy loading of both passengers and stuff.

He: With the new engine and the available traction control, the ’96 Windstar is above average, but not cutting edge. When the Windstar came out two years ago, it looked pretty fresh, but it’s already beginning to age. Since then, Honda has come into the market and the Chryslers have been totally redesigned. And the competition is only going to get stiffer, what with the new GM minivans getting ready to hit the showrooms in September.

She: For many families, the Windstar is going to seem sensible, not sensational. If you’re a ‘Ford family,’ you’re going to do just fine in it. If you’ve got a larger family, crave the fourth door and need the extra room, the extended-length Chrysler minivans may be a better choice. I had a great vacation, but if I had to do it again, I’d probably look into driving the Plymouth or the Dodge – or leave the kids home.

* AAA Michigan rates based on an average family of four from the Livonia area whose primary driver is aged 40 with no tickets who drives 3-10 miles each way to work. Rates reflect multicar discount and, where appropriate, discounts for air bags and seat belts.

This was my best car. I would definitely recommend this car to all my friends. Great for families. I just love how the car runs and it is great on gas.

Bought this when we had our 5th child and it took us to 165,000 miles. Never had a transmission problem but we did blow a head gasket. Gas mileage is good at 26 hwy. Power is great, you step on it, it responds. Good comfort throughout all three rows, sliding feature came in handy, they're really heavy so beware if you must remove them. Visibility is is great but like all minivans you cannot see the end of the hood. Ride is smooth, absorbs bumps nicely and doesn't wake the kids when sleep (praise Jesus). Headlights have good distance and illuminate the road well. Our only problem that made us break down and buy a 2003 Windstar was "ding...ding...ding x50" when driving down the road. The doors were all closed but the sensors were bad so the computer thought they were open. No new sensors would fix the problem so we decided a new van was needed anyway. Good van.

GREAT CAR FOR THE MONEY

November 4, 2009
By MINIVANMAN
Owns this car

PERFORMANCE HANDLING COMFORT AND ECONOMY TO CARRY 7 ALL ROLLED UP IN ONE CAR. GET OVER 20 MILES TO THE GALLON WHILE COMFORTABLY SEATING 7 ADULTS! THE SEATS ARE AT THE IDEAL HIGHT TO GET IN AND OUT WITH BAD KNEES AND MOST OF ALL ITS BUILT FORD TOUGH! 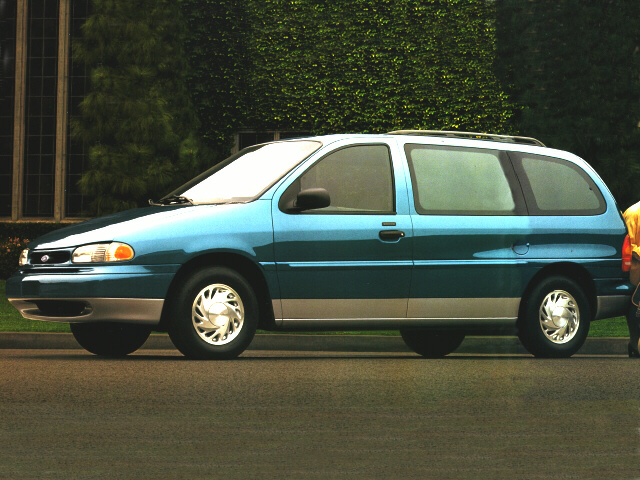 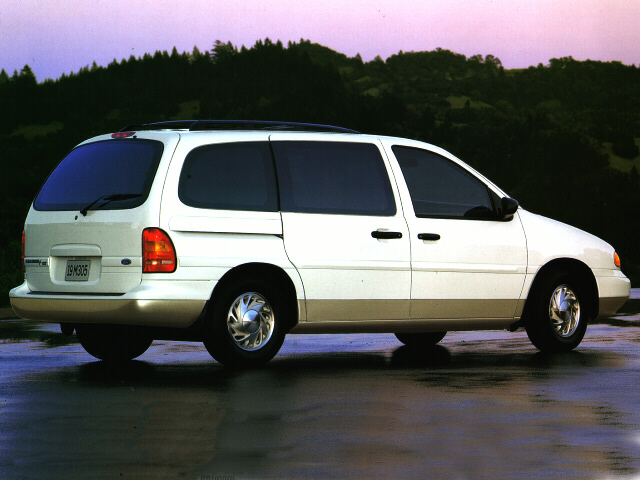 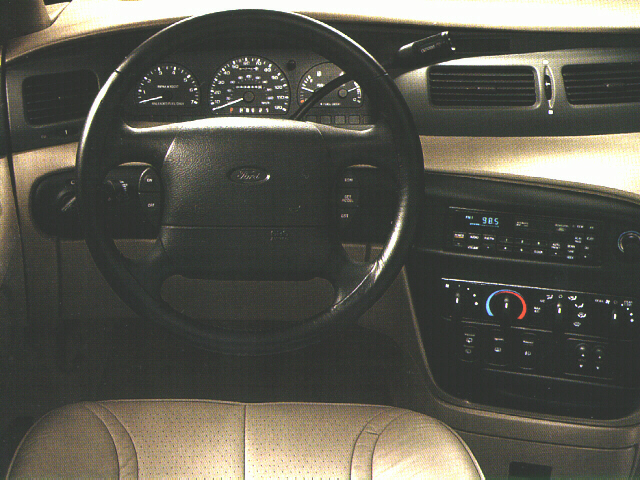 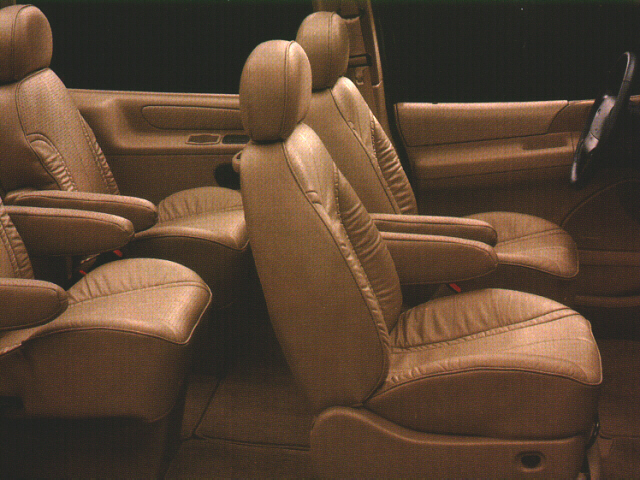