Our 1994 Nissan Pathfinder trim comparison will help you decide.

That car hikers simply roll them off the delivery truck into the hands of waiting buyers. Forget any detour to the showroom.

That, of course, must mean rival vehicles from Japan such as the Toyota 4Runner, Nissan Pathfinder and Isuzu Trooper are gathering dust in some distant corner.

You’d think so, based on the fact that the rising value of the yen against the dollar has boosted Japanese vehicle prices to the point that it doesn’t hurt to inhale deeply from the smelling salts before focusing on the window sticker.

But it’s not the case. All sport-utility vehicles are doing well, and whilethere are domestic loyalists, there are import fans, too. Such is the case with the Nissan Pathfinder-or, as the local Ford ad calls it, the “Sneeze-on Pathgrinder.”

Sales, when last we looked, were up 50 percent from a year earlier. What makes that a bit surprising is that in the world of sport-utility vehicles, Pathfinder isn’t exactly what you’d call a pathfinder. Except for a little cosmetic touchup, the Pathfinder has basically gone unchanged since it bowed in this country in 1986.

One gripe we have with Pathfinder (and 4Runner) is that in a U.S. market begging for function yet fun, for multipurpose use and the ability to stay on the road or take a side trip off it, and to be able to load it up with people and down with luggage, it is annoyingly narrow. It’s time the Japanese look atthe dimensions on the Explorer and Grand Cherokee, realize an expansion is in order and let out the sides a notch or two.

The Pathfinder is 66.5 inches wide, the same as the 4Runner. But the Explorer is 70.2 inches wide, and the Grand Cherokee is 69.3 inches wide. Those added inches mean you feel less confined.

The mileage rating for the V-6 and four-speed automatic in our test vehiclewas 15 m.p.g. city/18 highway. That means frequent stops for refueling.

Push-button four-wheel-drive activation is comin g because more and more people are demanding it, but you need to be patient a while longer in the Pathfinder.

A quick check of the steering-wheel hub reveals no “SR” (supplemental restraint system) lettering to indicate an air bag is inside. Like push-buttonfour-wheel drive, an air bag is coming, but again you must be patient.

Our test vehicle came with 31.10 15-inch monster tires, which are added forthe macho, chew-through-the-mud, toss-out-the-sand image. On dry pavement at speed, as you approach a sharp corner the appearance of those treads becomes secondary to the need for stability. Oversize tires make the vehicle feel top-heavy and a bit uncertain whenever the road isn’t straight. We prefer the standard P235 15-inch tires for better handling.

We also would like to see Nissan design smaller hea drests. The rests are solarge they block side and rear vision. The way to win back visibility is to remove the headrests, which makes you ask why they have to be so big that you don’t use them. (At least when the rear-seat rests are removed you can fold and move the seats forward to increase cargo space.)

And we’d really like Nissan to shed the tubes hanging by the rocker panels and come up with some integrated steps to make for easier entry and exit.

Finally, the sunroof is one of those twist-open rather than power-open types. No gripe, but it would be nice if there were a transparent screen or a covering over the glass to reduce glare.

April 23, 2013
By greyhoundrick from phoenix, az
Owns this car

Weve owned many Pathfinders and the 1994 we currently have is our favorite. The styling is unparalleled and it just runs and runs. We have 180,000 on it and its still going strong. A few problems here and there but overall super reliable. With many cars and suvs all looking the same these days its so fun to drive a legend that stands out and in my opinion, looks better than anything out there!

S we boght this car brand new in 1994, on my first birthday and it's been run if like new ever since. It used to be our long distance car (lots of trips to canada) it's always been irreplaceable. It's always been unmatchable in The snow. Now it's my car! One time it climbedover a 7 foot pile of snow to pull out my cousins Acura Mdx. We bought a BMW x5 which still couldn't compare.

October 9, 2010
By drive alot from Lexington, Ky
Owns this car

i am really love 1994 pathfinder se. i have that suv since 2001. it was 40,000mile till 139,000mile i put new water pump and starter and timer belt one time. alway add new brake because of power alot. i drive long any state never break down. suv had alot rust but running like new and hard to dead. 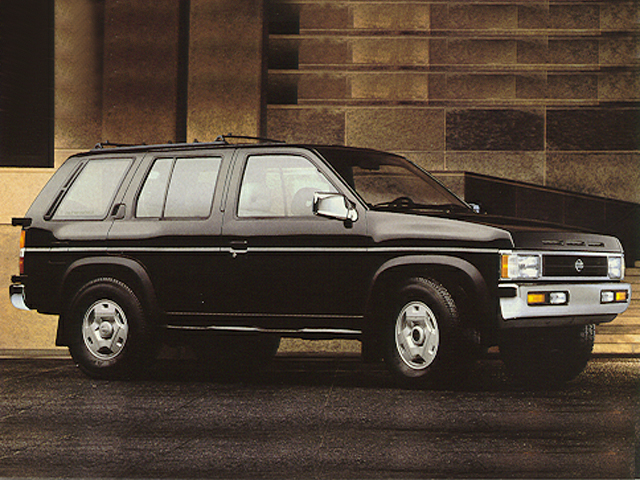