Our 1994 Pontiac Bonneville trim comparison will help you decide.

There is no arguing with the fact that Pontiac builds some high profile driveable cars.

The car offers technical facets including supercharging to back that up. It’s not a flat-out road racer, but for the sporting types who want to lean on the throttle they’ll find top end performance designed to get their attention.

TThe Pontiac Bonneville SSEi is a derivative of the Bonneville SSE, but has more power via the addition of an Eaton Roots-type blower. In a day when running pressurized intake manifold systems generally falls to the province of the turbocharger, Pontiac indeed has gone its own way via utilizing the services of a supercharger.

There is quite a respectable leap forward in power using this Eaton unit, a gain of some 55 horsepower. Unlike the turbo, with its power surge coming as the engine speed comes up, the Roots-type is a positive displacement blower that provides a more constant pressure all along the engine rpm scale.

Pontiac’s 1994 Bonneville SSEi can qualify as a world-class sports sedan in every sense of the word.

In Europe it would be classified as a continental tourer, a classification given to rapid transportation type cars that can whiz from country to country. The same can be said for this sedan in Indiana.

In driving the SSEi that GM’s Terri Phillips provided for a test car, it would zip down the interstate, absent of wind noise, inconveniences or any other distractions that might plague driver and passengers.

Pontiac’s SSE is a sophisticated sedan strong on aerodynamic styling and upscale interior appointments and equipment. Adding the “i” supercharger package increased the high gloss already present in the test car.

Being a factory four-door, it carried a goodly amount of optional equipment offered by Pontiac. Some of it was oriented toward an improved operational mode while other accessories were designed simply to pamper whoever was behind the wheel.

It might have raised the price over $5,000, but it made the sports sedan a really nice car to drive.

There wasn’t a whole lot more to do than put it in gear and steer. A 12-way power seat wrapped around you in such a manner that if you couldn’t find a comfortable driving position you were not trying. The controls for the seat were a keyboard in themselves, and it took a few miles of driving before you stopped pushing the wrong button.

Having a fraction over 201 inches of overall length, the SSEi is classed as a large car, and from the standpoint of interior front and rear room it merits the classification. Entrance and exit was very easy, and once seated there was more than ample leg room.

It’s a car in which you could strike out for California and not feel as though you had gone four quarters with the Colts at the end of a day’s drive.

Stability from this front-drive was rock steady at high speed, whether going straight or through sweeping turns. The “i” version of the SSE line is the heaviest of the models, and this contributed to ease of ride as well as having a moderate effect on off-the-line acceleration.

The engine in the car is a 3.8-liter V-6 that is pulling a sedan weighing almost 3,700 pounds, not exactly light weight for 0-60 mile-per-hour runs. So even though you have 225 horsepower in hand and a driver selected “Performance” mode for the four-speed automatic, 0-60 lies in the low 8 seconds bracket.

Acceleration in the mid-speed range, what with no turbo lag from a Roots- type supercharger, was immediate. Top speed of the car is rated at around 130 mph.

Driver/passenger amenities went on and on, taking in traction control, automatically controlled air, power sun roof, deluxe stereo and the like. But the one feature that was most appreciated was the so-c alled “heads up” instrument display.

This flashes the speedometer reading on the windshield glass just below a driver’s eyes, and adds immeasurably to knowing how fast you’re going without taking your eyes off the road.

The Bonneville SSEi is Pontiac’s flagship model with a $31,000-plus sticker to prove it. But as a world-class sports sedan it can stand with about any of them, and most of those run many dollars more than the bottom line for this car.

November 27, 2011
By Pedal to the Metal from Wisconsin
Owns this car

I bought this car used with 175,000 miles on it. The person before me, a 17 year old, said he beat on the car. I still own it (now passing 215,000 miles) and its still bearing all the punishment I've given it. Yes with the old age, things need to be replaced, but its a tank overall. Its taken a few car accidents with no damage taken, but it has given a good amount. This car was made to last, not bend and break like todays cars. I think this car should hit 300,000 miles easy. Got plenny of power, handles great, rides smooth, its comfy, spacious, drives like a cruise liner. Awesome car made by Pontiac. Wonder what the '04 Bonneville has to offer when I get it?

January 7, 2009
By Smoke on the Water from Grand Rapids, MI
Owns this car

Pros: Relaxing to drive, comfortable seats. Cons: Handles like a boat, not good gas mileage. This is pretty much a sportier version of a Buick, therefore it is not as boring as a Buick. 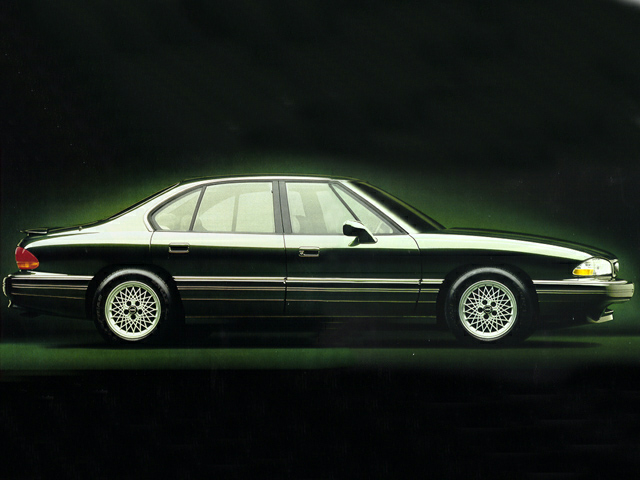