Our 2006 Chevrolet Silverado 1500 trim comparison will help you decide.

Vehicle Overview
A hybrid-powertrain version of the Chevrolet Silverado full-size pickup truck became available to retail customers in select states in the 2005 model year and goes on sale nationally for 2006. Chevrolet also added a high-output 310-horsepower, 5.3-liter V-8 for 2005, which is available on the four-wheel-drive 1500 extended-cab model.

Light-duty 2006 models get a fresh front end with a power dome hood. A new VortecMAX Performance Package that includes a 345-hp V-8 can enhance towing capabilities. Quadrasteer four-wheel steering is no longer offered.

The Silverado 1500 provides a half-ton rating, the 2500HD has a three-quarter-ton rating, and the 3500 features a one-ton rating. A 1500HD model also is available, though only in Crew Cab form. Heavier-duty models can be equipped with a Duramax diesel V-8 or a big-block 8.1-liter gasoline V-8.

One 1500-series model, the Silverado SS (Super Sport) performance truck, features a high-performance chassis, 20-inch tires and high-output 345-hp, 6.0-liter V-8. A lowered ride height and what Chevrolet calls a “trim, aggressive stance” differentiate the SS from other models in the lineup. A two-wheel-drive SS joined the four-wheel-drive version in mid-2005.
(Skip to details on the: Silverado Hybrid | 1500HD | 2500HD | 3500)

Exterior
Offered in Work, base, LS and LT trim levels, the Silverado 1500 comes in four variations in addition to the Crew Cab: regular cab or extended cab, with either a 6.5- or an 8-foot cargo bed. A new extended-cab short-bed model is available for 2006.

Extended-cab Silverados have four doors. The narrow, rear-hinged back doors can be opened only after the front doors are open. Crew Cab trucks have four, conventional, front-hinged doors. Silverados feature angular wheel openings.

Two four-wheel-drive systems are available. Insta-Trac permits shifting in and out of 4WD-High on the move via a floor-mounted transfer case. Autotrac automatically transfers power to the front wheels on slippery surfaces.

Driving Impressions
In basic regular-cab form with few extras installed, the Silverado 1500 behaves like a serious workhorse. The traditional pickup-truck experience translates to a bouncy ride — especially when the cargo bed is empty. But there’s plenty of energy, especially with V-8 power.

Performance with the automatic transmission is satisfying but hardly seamless, and each shift is noticeable. Handling isn’t especially ponderous, as the 1500 maneuvers rather well through urban environments. The instruments are easy to read, and the Silverado runs rather quietly for a truck.�

A 14-kilowatt starter-generator permits the Silverado Hybrid to automatically stop and restart its gasoline engine at stoplights or for other temporary halts. The starter-generator also provides regenerative braking while the truck is coasting. Unlike other hybrid models on the market, the electric motor does not actually propel the vehicle. The 5.3-liter V-8 has the same output ratings as a conventional Silverado’s V-8: 295 hp and 335 pounds-feet of torque.

Operation is subtle. Whenever the engine shuts itself off, which occurs when the truck slows to a halt, it’s difficult to discern that anything unusual has happened. The gas engine restarts instantly as soon as you let up slightly on the brake.

1500HD
Offered in a simpler lineup compared to some of the other Silverado versions, the 1500HD comes with a 300-hp, 6.0-liter V-8 and a four-speed-automatic transmission. Rear- and four-wheel-drive versions are available in LS and LT trim levels. Available for 2006 is a VortecMAX Performance Package with a 345-hp V-8 that enhances towing capabilities.

Only available in Crew Cab form with four, conventional, front-hinged doors, the 1500HD can have seating for up to five or six occupants, depending on whether bucket seats or a bench are installed in the front. Back to top�

During the 2006 model year, a new Duramax 6.6-liter diesel V-8 will emerge that produces 360 hp and 650 pounds-feet of torque while driving an Allison six-speed-automatic transmission. A VortecMAX Performance Package with a 345-hp V-8 is available on four-wheel-drive 2500HD models for 2006 to enhance towing capabilities.

3500
One-ton Silverado 3500 trucks come in base, LS and upscale LT trim levels. A Work Truck model also is available. Powertrain choices are similar to the three-quarter-ton 2500HD series and include a 300-hp V-8; a 330-hp, 8.1-liter gasoline V-8; and a Duramax turbo-diesel V-8 that cranks out 300 hp with a manual transmission or 310 hp when teamed with an automatic. Two automatic and two manual transmissions are available.

During the 2006 model year, a new Duramax 6.6-liter diesel V-8 will arrive that produces 360 hp and 650 pounds-feet of torque and drives an Allison six-speed-automatic transmission.

Silverado 3500 pickups come in four body styles: regular cab, four-door extended cab, four-door Crew Cab or plain chassis cab (with no cargo box). The 3500 can be equipped with dual wheels on both sides of the rear axle. Standard 16-inch tires mount on eight-bolt wheels. Back to top

Exactly what we wanted

This truck meets all our needs.. It runs @ drives like a new one. It also looks new inside @ out. Not sure about mpg but seems like 15 around town.Haven't taken a trip yet but will be soon.... I would recommend a Chev. Silverado to anyone looking for a truck@ We've had a lot of trucks in our 48 yrs. if marriage.. This is my favorite of all we've had

I bought a 2006 Silverado with 77,000 miles on it 3 months ago . Great truck for daily driving , no problems so far . It has a 262 v6 engine under the hood . Not a power horse but is great for pulling cart with riding mower and also has enough power to keep up driving on highway with no problems . Hope to get 5 years out of it .

Rating breakdown (out of 5):
7 people out of 9 found this review helpful. Did you?
Show full review
See all 69 consumer reviews 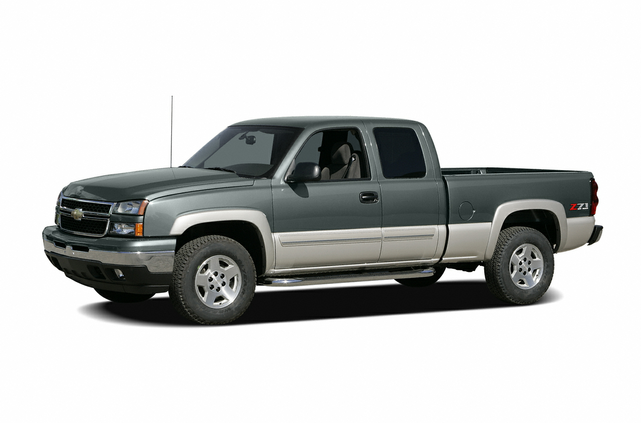 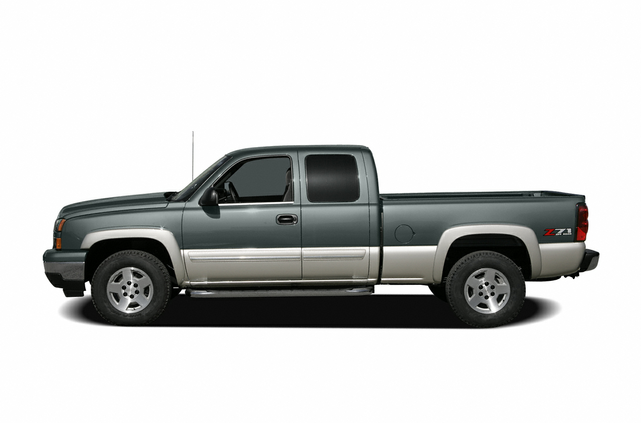 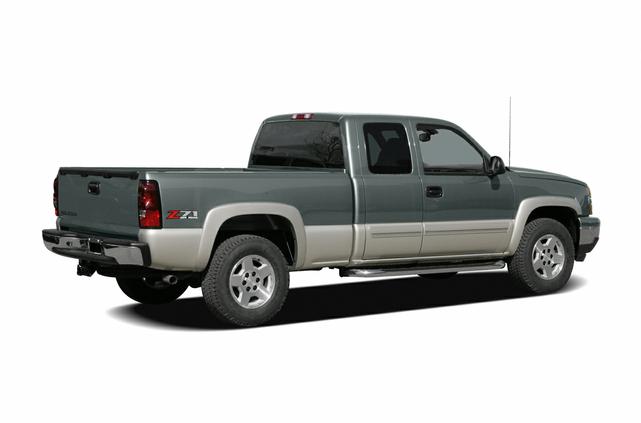 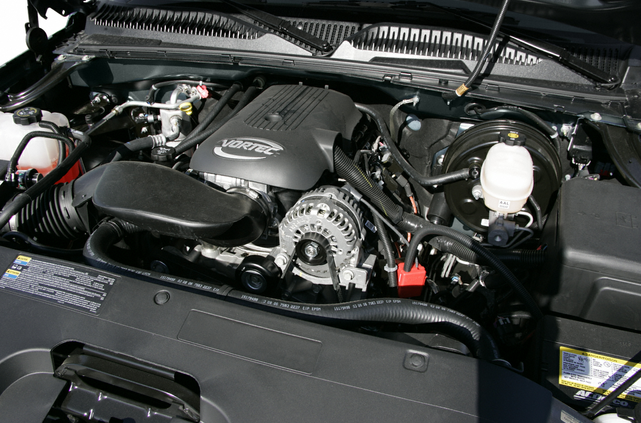 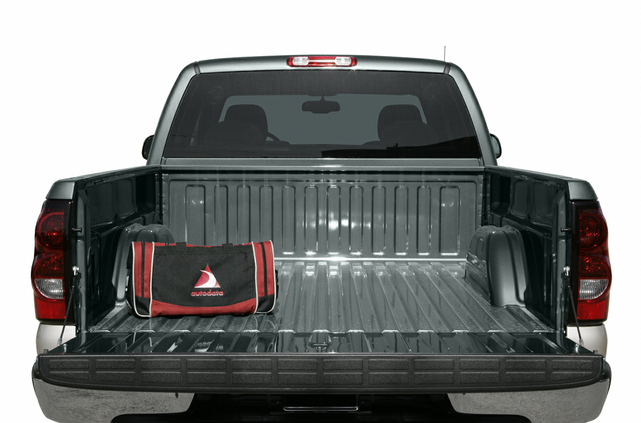 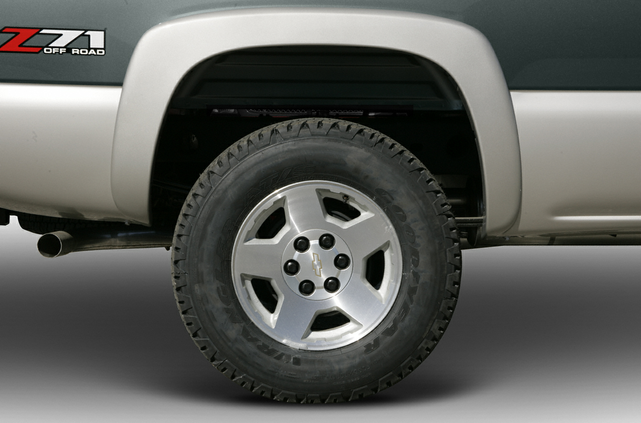 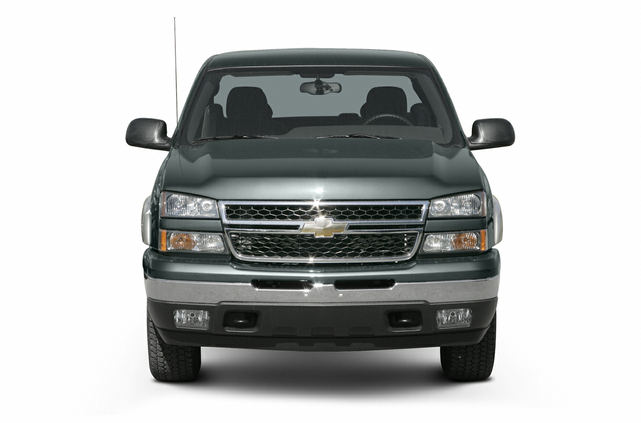 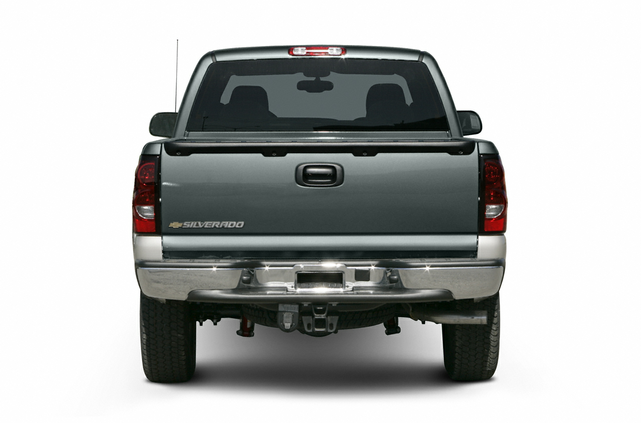 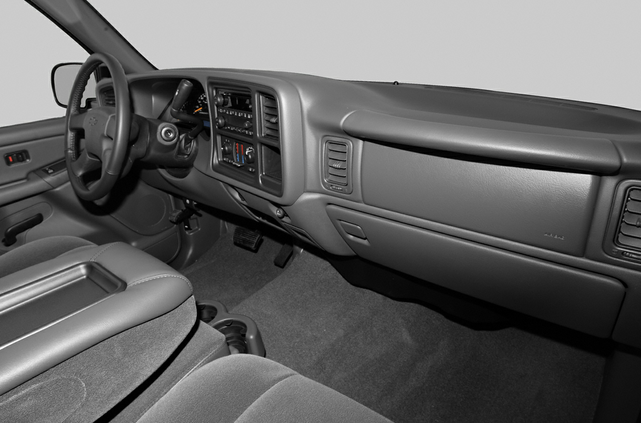 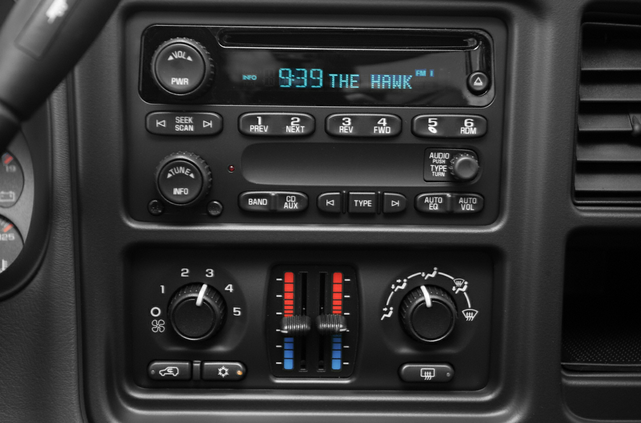 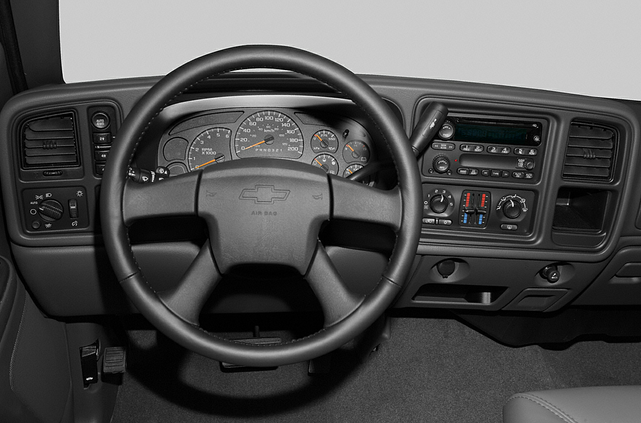 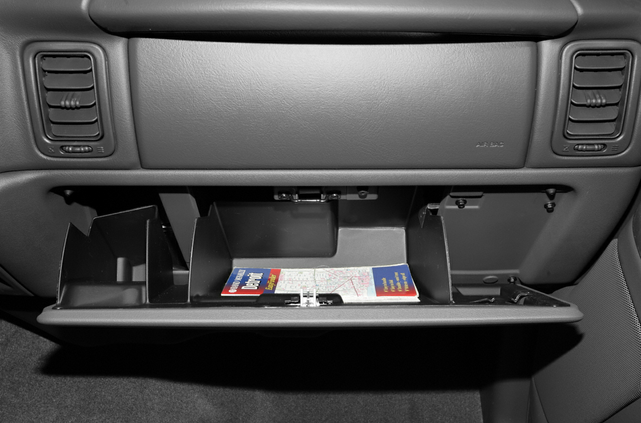 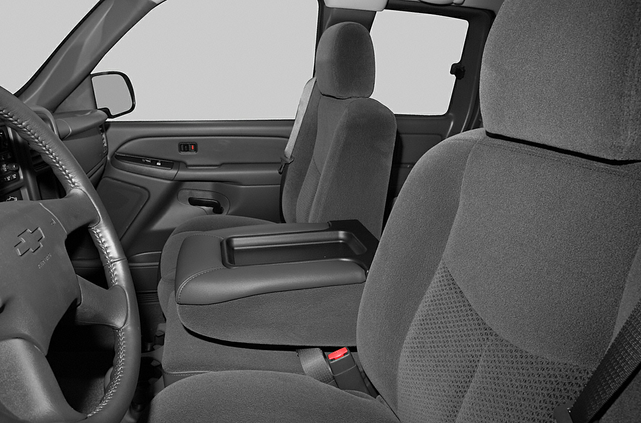 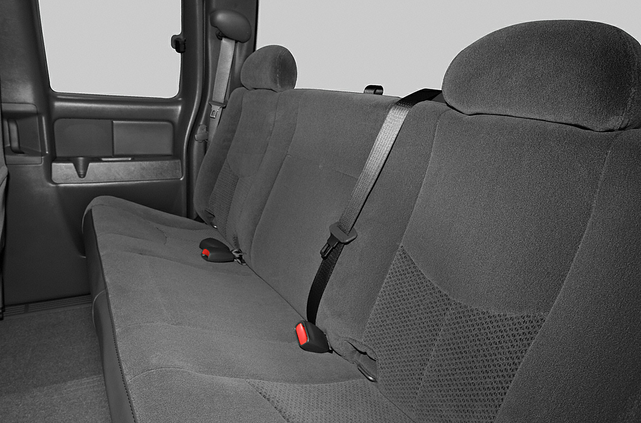 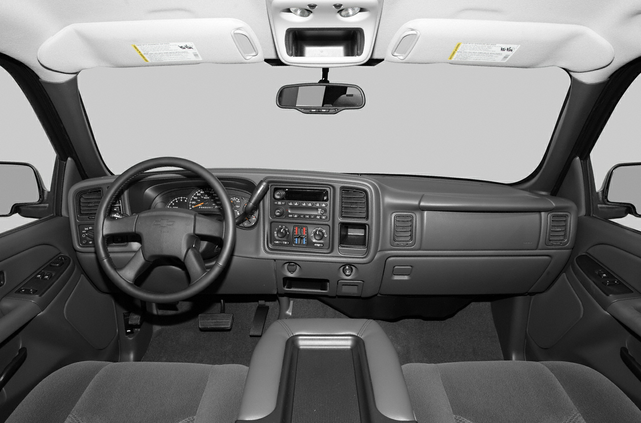 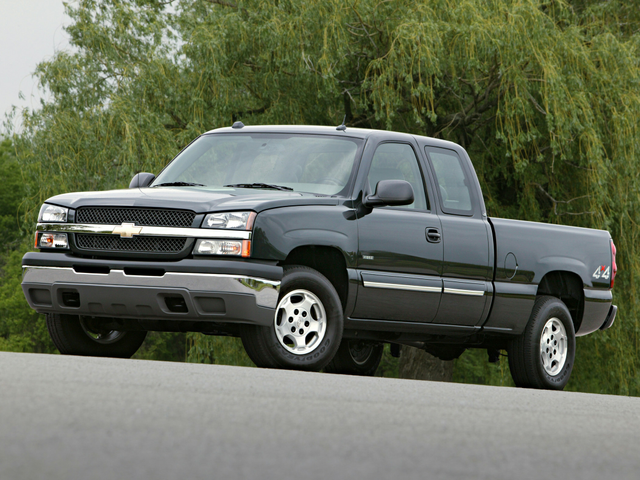