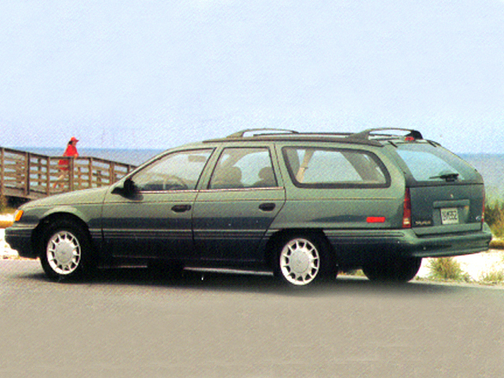 Our 1993 Ford Taurus trim comparison will help you decide.

As the 1993 model year winds down, we pass along apologies to Ford Motor Co.

Sympathies it doesn’t deserve after agreeing to a contract with the United Auto Workers that not only guarantees people get paid for not working, but also that they don’t have to pay for health care when working or not working.

And to think that Ford Chairman Harold “Red” Poling delayed his retirement date by at least a year to see this contract resolved before he left, when allhe had to do was hand over the keys to the Ford vault to the UAW, with the request: “Don’t forget to close the door and turn out the light when you’re done, fellas.”

Ford deserves apologies because we keep forgetting that the Taurus SHO sedan has been civilized for the masses for 1993 with the addition of a four-speed automatic transmission for the first time.

Of course, it’s easy to forget about the SHO because Ford has been so wrapped up in promoting the upcoming 1994 Mustang that it, too, forgot about the SHO. Ford has a history of preintroduction promotion, but the day the car goes on sale, it’s left to fend for itself as Ford quickly moves on to hyping the next new model coming.

SHO deserves more. The Pontiac Bonneville had the domestic sports-sedan market to itself over the last few years. Ford was a mere understudy, a backupto the star, albeit with a very powerful 3-liter, 220-horsepower, 24-valve V-6but only a five-speed manual transmission. Because only about 15 percent of the population can drive a stick, Ford had an SHO with nowhere to go.

For 1993 Ford offers the choice of a 3.2-liter version of the 24-valve Yamaha engine that still develops 220 horsepower but is teamed with automatic only. If you opt for that combination rather than the standard 3-liter V-6, you pay $641 more. The mileage rating is 17 m.p.g. city/26 highway.

The 3.2 V-6 is very lively, and the automatic is smooth-shifting yet quiet.The sedan offers driver- and passenger-side air bags (passenger optional at $488), anti-lock brakes and a performance suspension that gives Bonneville a run for the money. Lower plastic bodyside cladding and the SHO letters stampedon the rear bumper are nice touches, enough to identify the car as something special without using floodlights to do so.

The ’94 versions will be in showrooms shortly. The passenger-side air bag and speed-rated tires will be made standard.

For the `93 model year, Ford`s performance sedan offers automatictransmission for the first time, a 4-speed companion to the 5-speed manualthat was the one and only transmission in the car since it first appeared inthe 1989 model year.

What the automatic means is that the 85 percent of the population thatdoesn`t know how to drive a 5-speed, as well as those in the remaining 15percent who do but really don`t want to fight five gears in rush-hour traffic,can now get their hands on one very energetic sedan.

We test-drove the `93 SHO with automatic and found it performs with thesame zest as the original Bonneville SSE when Pontiac came up with a sedanthat acted like a coupe. It does fairly well against a SHO with manual, too.

Several 0-to-50 m.p.h. sprints performed in just about 4 seconds provedthe SHO with automatic won`t embarrass you dashing from the light or into the passing lane. Hit the pedal hard, and you`ll be nudged back into the wide,supportive bucket seat. To ensure you realize this is a performance sedan,Ford provides some tuned exhaust sound effects with just enough growl to call attention to the 3.2 V-6`s quickness.

Perhaps the biggest loss between 5-speed and automatic is the 1 m.p.g. in city mileage the automatic gives up in saving you the time and effort inmaneuvering the clutch. The automatic, which comes with a switch on/offoverdrive, is rated at 17 m.p.g. city/26 m.p.g. highway to the 5-speed`s 18/26. The added money you`ll spend on fuel in a year`s time will be offset bythe money you`ll save on Ben Gay in trying to get your left leg muscles backto normal after spending a week with the 5-speed`s clutch.

You don`t lose any of the SHO`s road-holding ability with eithertransmission. MacPherson struts with coil springs, nitrogen gas pressurizedshocks, stabilizer bars, speed-sensitive variable assist power steering, athick, sure-handed steering wheel, and 16-inch steel-belted radials maximizeyour grip of the road while minimizing sway, lean, bumping or bouncing. It`s acivilized suspension for the enthusiast without being too firm or too harshfor the everyday traveler.

To complement the 220 h.p., the SHO comes with anti-lock brakes asstandard. We attempted several panic stops, and the car held a straight linewithout wavering. Our only gripe with the brakes was that the pedal travel wasa bit too excessive in the car we tested. We prefer a firm-feeling pedal that responds at once.

In addition to the availability of automatic transmission and ABS, for1993 SHO offers a standard driver-side air bag and optional ($488) passenger- side air cushion. Performance yet safety in the same package. A car Mom or Dadcan tool around in and have some fun, yet not worry about the kid or twostrapped into the back seat. In other words, SHO is a family car that doesn`t have to act like one.

Pontiac gave new meaning to the sedan when it came out with itsBonneville SSE in 1988. Pontiac showed that a sedan needn`t be stodgy and thattwo extra doors needn`t be a hindrance to performance. With the addition ofautomatic transmission and the added benefits of ABS and dual air bags, Taurushas moved Ford into that same league.

The Bonneville and Taurus bring up another similarity. The original SSEwas a styling gem. I t looked sporty and was just about as appealing as mostcoupes on the road. Then came a major design change for `92, a look thatpersonally leaves us a bit cold. Sheetmetal, and especially head andtaillights, look “pinched.“

The `93 SHO left us with the impression that Ford`s styling guru, JackTelnack, had an off day. There are body-color front and rear bumpers with the “SHO“ lettering etched into the rear, “24 valve DOHC“ (dual overheadcam) lettering on the fenders, low-slung front air dam with fog lights builtin, the floating Ford oval resting where the traditional grille had been, and a flat deck lid spoiler incorporating the third brake light.

But give the car a quick, or even lengthy, look from the side or the rear and you temporarily have to stop and think: Is that a Chevy Lumina?

Ford`s intent was to make SHO distinct from the regular Taurus sedan. Itdid, but that`s not to say it did a real great job of it. The SHO`s goodiesare mostly inside o r under the skin.

Of those goodies worth noting, there`s a stowage bin with cassette andcupholder in the center console; tilt wheel, even though it houses an air bag (some cars offer bag or tilt, but not both); a second set of radio volume/seek controls on the instrument panel near the wheel; a handy yellowrelease button for ease of opening the hood; and an arrow on the instrumentpanel gas gauge pointing to the location of the filler door to help you avoid pulling into the filling station on the wrong side.

Another nifty touch is the key fob with buttons you push to lock orunlock the doors and trunk. It also has a panic button to activate the hornand flash the headlights in the event a seedy character is spotted near thevehicle.

One complaint was the leather seat. The leather rubs up against thecenter console and sounds like someone crumpling a cellophane bag.

Ford has been selling about 6,000 SHOs annually, but Ford divisiongeneral manager Ross Roberts said he expects sales to climb to at least 20,000units in 1993 with the availability now of automatic transmission. He may beerring on the low side.

dont buy this car ever. I have the GL. If you like working on a terrible car all the time then buyit

Cars should all be

Bought this 1993 Ford Taurus GL station wagon new. Let tell you what I have spent money on her. Water pump replaced , One radiator hose, taillight bulb 4 times,( did myself). break job 4 times, change new battery 4 of them, 5 sets of tires. change oil and filter. give her good gas, Shell. It has 125489 miles on it. Just made an hundred mile trip to central valley yesterday . She runs fine at 70 to 75 seen no highway patrol of course. Engine, radiator, transmission, power steering, air conditioner and heater are all original. Ford 3.0 V6 should cars all be. When I tell people about her they all look at me with wide opened eyes.

November 29, 2012
By taurus warrior from iowa
Owns this car

My parents helped me buy a 1993 taurus as my first car. My dad got a lead on it from someone at work. Paid $4,000 for it, had 92,000 miles on it and drove it until it had 123,000. While I had it I had engine mounts, head gasket, tie rods, and muffler replaced. That is all wear and tear stuff though. I had no recurring problems with it and it got me from home to high school and home to college just fine, which is all I needed it for. Traded it in 3 years after I bought it. Still ran fine but the tranny was getting iffy. It had the 3.8 liter engine in it which explains some of the problems. Being a Ford guy I have come to know the 3.0 Liter V6 might be the most reliable engine Ford has ever built. 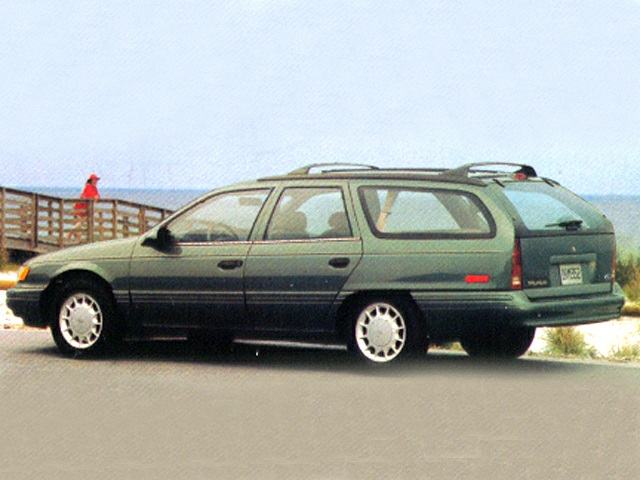