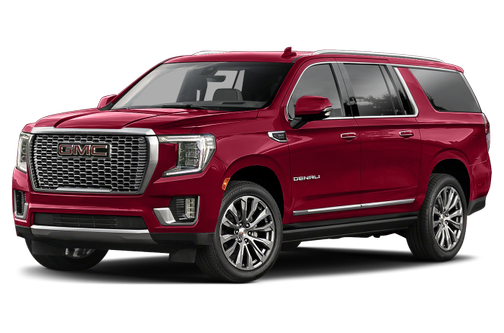 Our 2021 GMC Yukon XL trim comparison will help you decide.

Looks like: A GMC Sierra 1500 pickup truck’s nose with an SUV’s body

The redesigned 2021 GMC Yukon and Yukon XL have appeared, and the pair of related SUVs — the XL being an extended-length take on the Yukon — sees upgrades in every regard, with added technology, passenger and cargo room, suspension improvements and new powertrains.

Parent company GM redesigned the Yukon’s close relatives, the Chevrolet Tahoe and Suburban, for 2021, and the Chevrolet SUVs share powertrains and some interior features with the GMCs. Whether the Yukon has done enough to differentiate itself as the more luxurious of the two models remains to be seen, but it’s worth noting that upscale Denali editions get a different dashboard design. Still, it will be hard to tell until we can get inside.

Also offered for the first time on the Yukon will be an off-road-oriented AT4 model. That aligns with GMC’s plans to offer an AT4 version of all models by the end of 2020.

The nose of the new Yukon will look familiar to those acquainted with GMC’s full-size pickup truck, the Sierra 1500. GM seems to have lifted front styling for the Yukon Denali and AT4 directly from respective versions of the Sierra 1500, but I don’t mind. It’s a handsome getup that looks both rugged and a little ostentatious, which fits with how GMC is marketed.

Exterior dimensions have grown, especially for the non-XL Yukon. It’s 6.1 inches longer overall, with a 4.9-inch increase in wheelbase. The Yukon XL is still some 15 inches longer than its regular-length sibling, but its growth spurt is smaller. The wheelbase is up 4.1 inches over the outgoing Yukon XL, and overall length is up only about an inch.

Remember what we just said about the similarities to the Sierra 1500 pickup? Those end inside. The Yukon gets its own interior styling and technology, which looks to be a significant upgrade over the Sierra’s interior — the weak link on an otherwise solid truck. The Yukon’s cabin looks similar to that of the Tahoe and Suburban, whose interiors impressed us in our first look.

GMC offered little information in the way of standard features, so we don’t yet know screen sizes for the multimedia system and instrument cluster — though it’s likely they’ll match the Tahoe’s and Suburban’s 10-inch screens. The Yukon will offer an optional 15-inch diagonal head-up display plus an optional power sliding center console. The latter can slide up to 10 inches to open up a flat storage area with a hidden storage compartment that can store valuables more securely.

Denali models don’t just get dressier colors or materials; they get a completely different dashboard and instruments, plus unique seats, color themes and hand-cut leather. The multimedia screen sits lower in the dash with air vents above it — opposite from the high-mounted orientation you’ll find in the other Yukons.

There are three available powertrains: a pair of gasoline V-8 engines and a turbo-diesel six-cylinder. The base engine is a 5.3-liter V-8, with a 6.2-liter V-8 optional; GMC claims both engines are all new. GMC did not offer power figures for the base engine, though the 6.2-liter will make a robust 420 horsepower and 460 pounds-feet of torque. The turbo-diesel 3.0-liter Duramax six-cylinder did not receive final outputs, but the Sierra 1500 offers the same-spec engine, where it makes 277 hp and 460 pounds-feet of torque. It’s likely the diesel on the Yukon and Yukon XL will make something in the same neighborhood. A 10-speed automatic transmission works with all three engines.

The redesign also moves to a fully independent rear suspension. That matches the Suburban and aligns better against competition like the Expedition, which also has an independent rear. The Yukon and Yukon XL also get an available adaptive four-corner air suspension that can adjust ride height by up to 4 inches total as conditions dictate, including a setting for maximum ground clearance.

To differentiate the Yukon and Yukon XL from the Tahoe and Suburban, the GMCs will get a unique Active Response 4WD system as an option. This includes an automatic two-speed transfer case and an electronic limited-slip differential that can shift torque around or lock in 4WD Low.

Automatic forward emergency braking is standard on the Yukon and Yukon XL, and the big SUV will also offer plenty of optional safety technology. A camera-based rearview mirror, 360-degree HD cameras and rear pedestrian alerts are all available. There are also plenty of new trailering safety features, including trailer blind spot warnings, profiles for different trailers, and monitoring for trailer tire pressure and temperature.

We’ll keep a close eye out for pricing and fuel economy details (especially for the diesel) closer to this summer, when the 2021 Yukon hits dealerships.

Read many reviews and researched this vehicle and that helped me decide on this vehicle. Traded in a older suburban for this updated Yukon. Look forward to driving it.

This Yukon XL has exceeded our expectations. We upgraded from a 2014 XL and it's like apples and oranges. From a size standpoint, the new design allows my 6'6 son to sit in the 3rd row. Not possible on the 2014 xl. Also, they have upgraded all of the finishes and with the new 10 speed tranny the XL drives and feels amazing. We also opted for the 3.0 diesel as that's what was available. We didn't even test drive one as they are hard to find - but man are we happy with the engine, gas mileage, and just how quiet it is. In city driving we're getting about 22 mpg, and then on highway expect to get about 27. Safety features and heads up display all work great. And, the sunroof thing is amazingly huge. Well done GMC and I highly recommend the Yukon XL to anyone that needs to move people in comfort. :)

January 6, 2021
By Denali girl from Parma, Ohio
Owns this car

Love the truck, lots of bells and whistles, smooth ride, satin Steele is a beautiful color. The Denali has lots of space for my four boys.