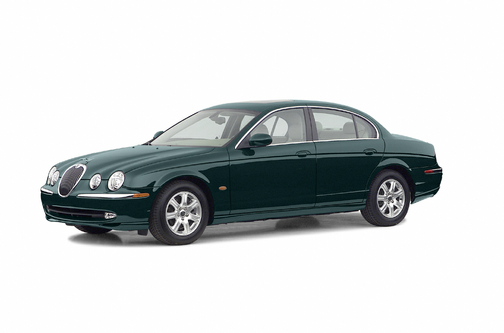 Our 2003 Jaguar S-Type trim comparison will help you decide.

The Jaguar S-type series, for a shining hour, gets to hold down the spot of flagship in the feline line.

But the real capo of this family is the XJ series sedan, which, in 2004 form, is just about to roll off the ship and reclaim its rightful place. (Hot tip: If you like – and can find – one of the 2003s, you should be able to get it at about a $7,000 discount. From what I’ve seen of the new XJ, though, you might have buyer’s remorse.)

To put it in the simplest terms, the S-type, evaluated herein, is a midsize Jag, while the XJ is a roomier full-size. Both are still rear-drive, and comparably elegant.

The S-type, being about mid-career (launched in 1999), got a freshening for the 2003 model year – a totally-redesigned interior plus new engine and transmission availabilities, as well as significant chassis and powertrain tweaks – a pretty thorough update, as they go.

Outside, it retains the sinuously attractive Jaguar lines and that in-your-face, somewhat controversial, grille treatment.

The inside, with as much leather and wood per square foot as you’d find in the better men’s clubs, is posh. But am I alone in thinking it was a mistake to change the bird’s eye maple accents from a cognac color to gray?

At 6-1, I had barely enough headroom and was far from extending my legs full out. Jaguar has donated an inch or two to the rear compartment, which is livable for two adults. The designator S-type spans a fairly wide range, from the low 40s to more than 60K, manufacturer’s suggested. Which class you fall into depends largely on engine choice. The “base” model is the 3.0, a rather Teutonic name for a machine crafted in Castle Bromwich, England, near Coventry.

The 3.0 of course refers to engine displacement, and is attained by six cylinders arrayed in V form. It produces 235 hp and 216 foot-pounds of torque. Even though the car pushes two tons with a hefty driver, that output is claimed by the factory to be good for 0-60 times in the decent mid-seven-second range.

Jaguar and six-cylinder engines have a long history, of course, but the famous ones of days gone by were of inline construction, which is smoother, but less space-efficient than a V.

If you’re serious about driving this cat, you really should consider the next step up, the V-8 series tested here. I say that not for the second or so you’ll save on the burnout time, but for the wonderful sense of readiness it confers at most any speed.

The 4.2-liter engine has been tuned for low-end response, with a 310 foot-pound torque max eclipsing the 300 hp it makes, which shows a good appreciation of the fact that we Colonials will likely never use the upper half of the speed range, despite having states that are bigger than the country of the Jag’s birth.

Upon ignition, the V-8 proves a proficient idler, betraying its presence neither by vibration nor noise. The latter attribute changes dr amatically when you step on the Jag’s tail, and run it up to the 6,000 range.

The sound then is typical of a highly-tuned V-8, slightly menacing. Not that you ever NEED to run to 6,000, since the twisting force peaks around 4,000. Moreover, this year the 4.2 is fitted with a six-speed automatic transmission.

That is probably overkill here, with the broad torque band available, but it does no harm except adding another layer of complexity. It might be of more use in the six-cylinder variant.

The new automatic showed a great deal of street smarts, moving seamlessly from gear to gear in suburban situations almost undetectably, save through the tachometer.

Liking a bit more control, I was glad to see the gearbox can be shifted manually, too. The shifter is console-mounted and arrayed as a U, with the usual P-R-N-D on the right side. From D, you can slide the lever to the left, which puts you in fifth gear. Pushing forward from that point gives you your choice of the four other cogs.

It’s better than a gated arrangement, where you have to jog the lever back and forth, but I still prefer the simplicity of the style Porsche pioneered as Tiptronic, where moving the lever over to manual control then empowers you to upshift by pushing it forward, or downshift by reversing the process.

Failing that, they should provide a bright LED gear indicator within the driver’s field of vision.

Speaking of vision . . . the test car had an optional navigation system-cum-central control station for advanced audio and air conditioning functions, too.

The navigation part is this year DVD-based, which means you can drive coast to coast without switching the street-level mapping disk.

It’s as good a display as I’ve seen, and though it was ignorant of some minor street names in the Tristate, it did a fine job of positioning the vehicle and selecting a route from A to B. It can be had with voice commands in 17 languages.

I do not like having simple functions such as changing the radio stations buried beneath layers of menus; at least here there are large, well-marked buttons for the discreet functions, such as Climate and Audio.

As these nav devices percolate down to more affordable machinery, I think we’ll have a collective epiphany about their distraction factor. The manufacturers cover their tails by making you agree, every time you turn it on, not to futz with it too much. It just can’t be good for a driver to have to look over and down and focus on a screen three feet away when her attention should be riveted on the 30 to 300 feet dead ahead.

Jaguar says the S-type has a stiffer suspension this year, plus more aggressive shocks and springs. Fear not, the ride is superb. The shocks are two-stage electronically-adjustable, reacting in the microsecond realm to pavement inputs, going from soft to firm in a few degrees’ rotation of the driving wheels.

The ride over broken concrete at a good clip was particularly impressive in how it filtered out the rude sensations before they entered the cabin.

It’s not obnoxious, but the tire noise is a bit higher than I’d like in a luxury sedan, even a sporting one. They can be heard at speeds risky and reasonable, although wind noise starts to cover that source when the car goes into a gallop.

The Jag’s handling is very good, probably as good as it needs to be for the intended audience. Like so many other upscale cars these days, it has stability control, which is supposed to prevent the driver from asking for a harder turn than is, at that instant, possible.

It worked quite well up to a point, but out there on the edge of sanity, it became a bit intrusive, I thought. I was aware of a lot of negotiation going on when all I wanted was a simple power slide.

I toured the countryside at a pace the numbers said wasn’t as sedate as it felt – a good sign – and pounded federal asphalt a bit harder than the watchdogs prefer, and my mileage was 23.1 combined, quite respectable; premium of course is mandatory. EPA’s estimates are 17 mpg city, 26 highway.

The brakes, as befits a marque with a racing heritage, were impressive – solid pedal feel and eye-popping deceleration.

Generously-shod 18-inch alloy wheels on the 4.2 no doubt contributed much to its feeling of stability as well as its dry braking prowess. The front tires are meaty 245/40s, while the rears are 275/35. Those low profiles, as well as the ultra-stiff-sidewall Z rating, speak again to the cleverness of the suspension engineers.

Being a low-volume car, the S-type has not been crashed by Feds or the insurance folks. I would feel reasonably safe, however, based on the solidity of the chassis as well as the presence of front, side and head-curtain air bags.

I mentioned a third tier earlier – that is an S-type with this same engine, prompted by a supercharger. For a starting price of $62,400, this gets you 400 horses and 408 foot-pounds – just the ticket for unruffled 70-mph touring.

If I may niggle . . . its strikes me as tacky to advertise the V-8 with chromed exterior emblems. Just give it specific wheels, okay? And what’s with the potmetal face on the ignition switch? My snowblower’s is better conceived.

Most fun car that I have ever driven.

The 8-cylinder Jaguar S-Type has no serious problems. Runs like a top. Interior is very luxurious. This car gets great gas mileage and has classic beauty.

Rating breakdown (out of 5):
6 people out of 6 found this review helpful. Did you?
Show full review
See all 37 consumer reviews

All model years for the Jaguar S-Type 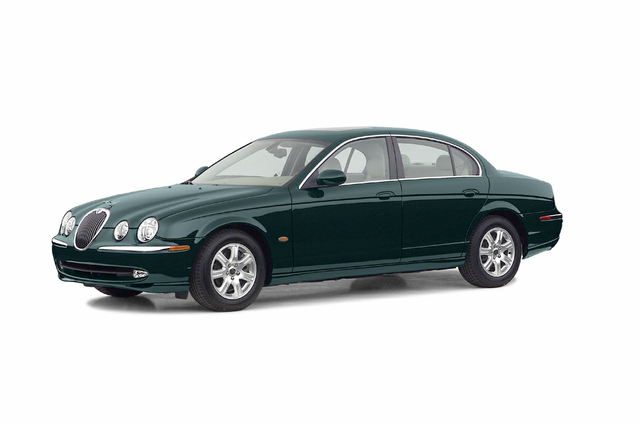 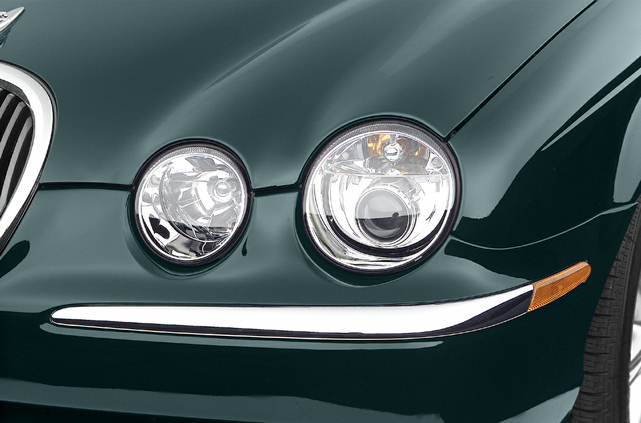 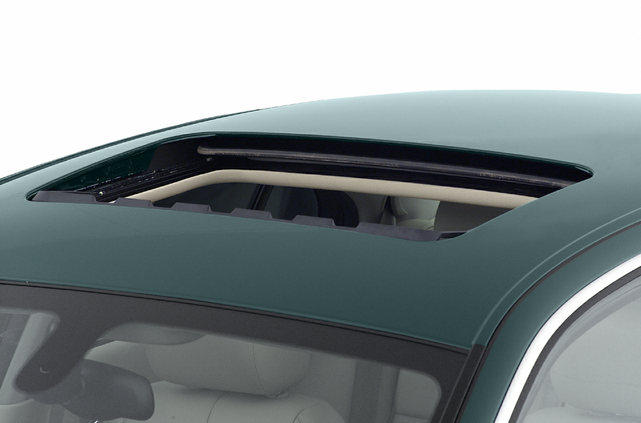 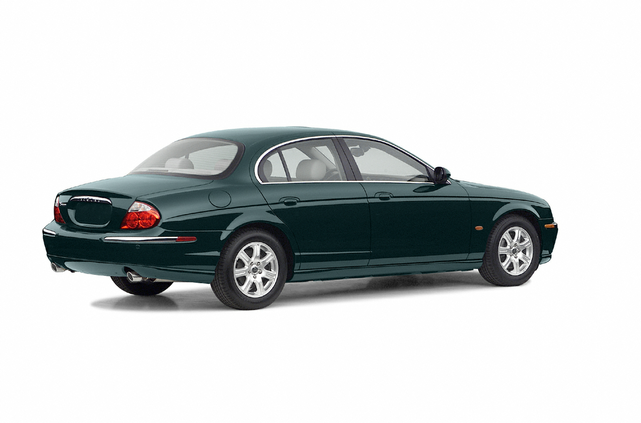 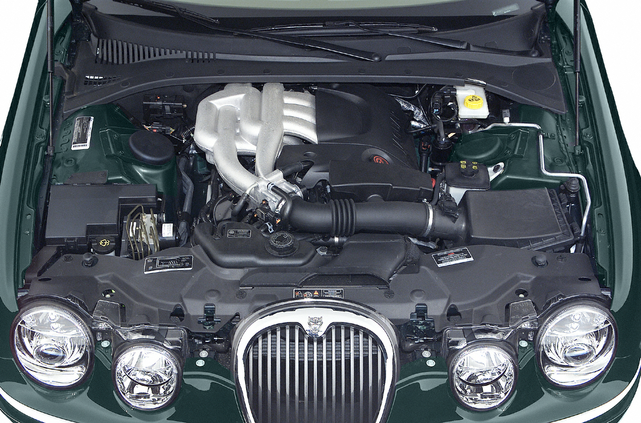 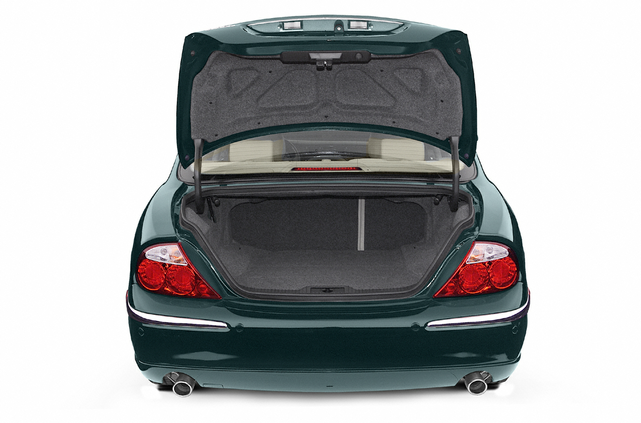 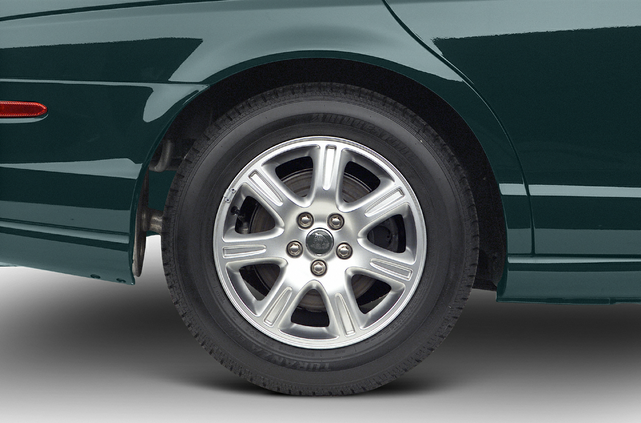 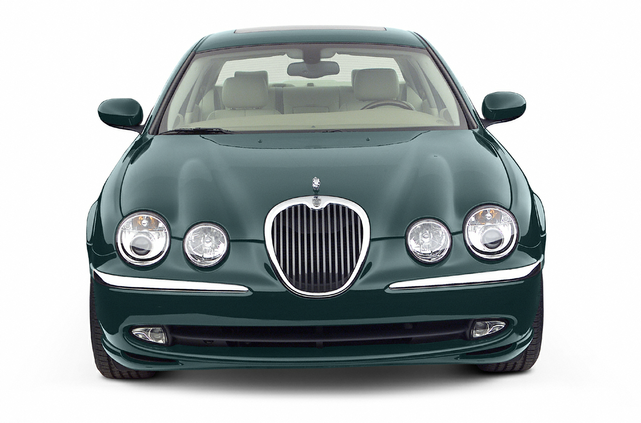 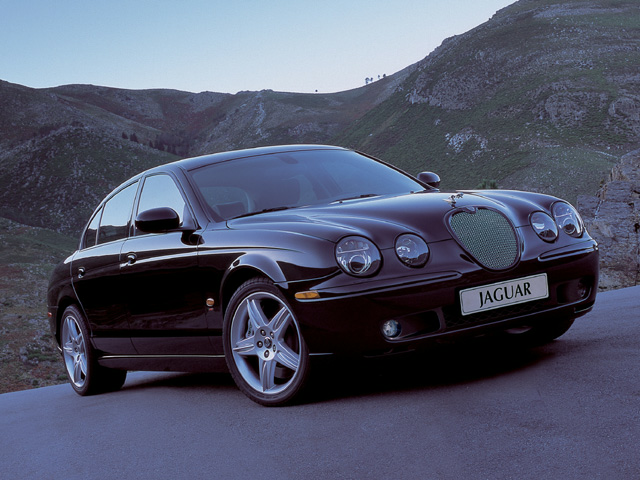 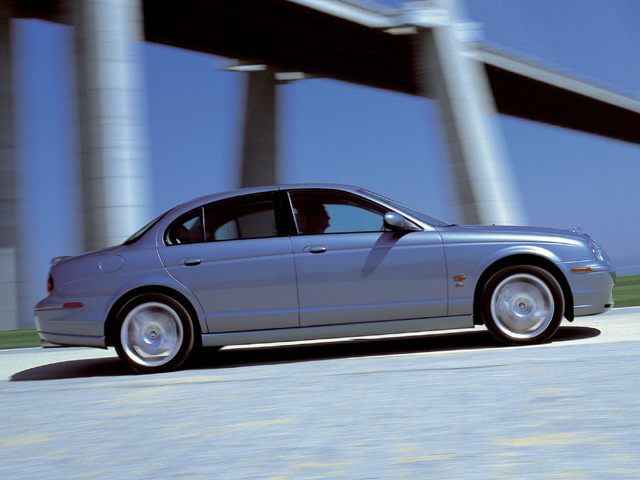 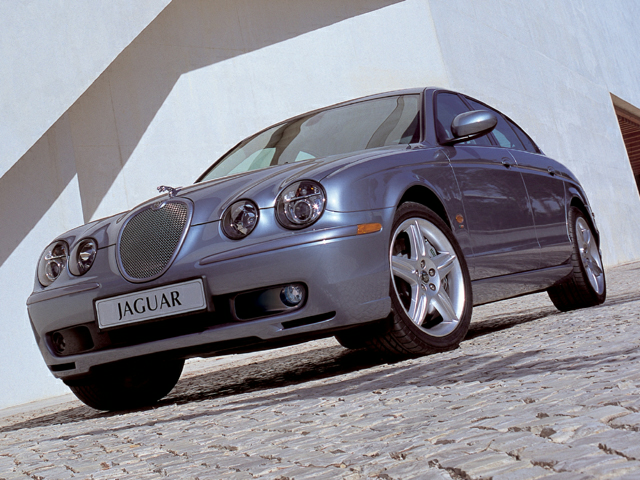 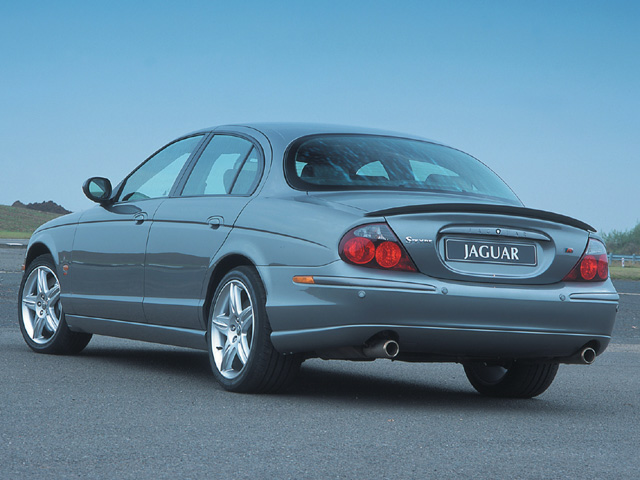 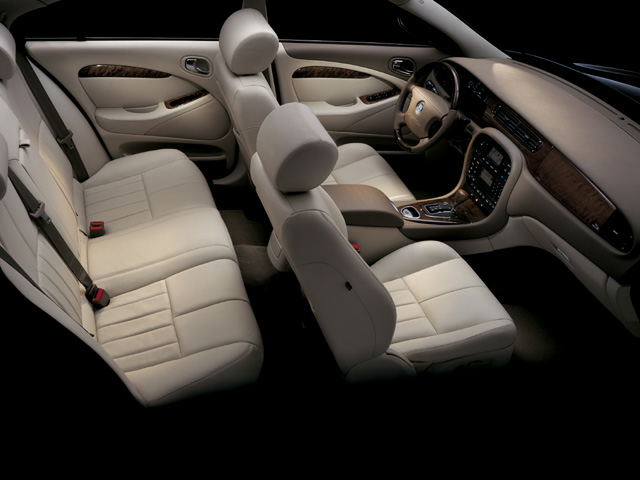 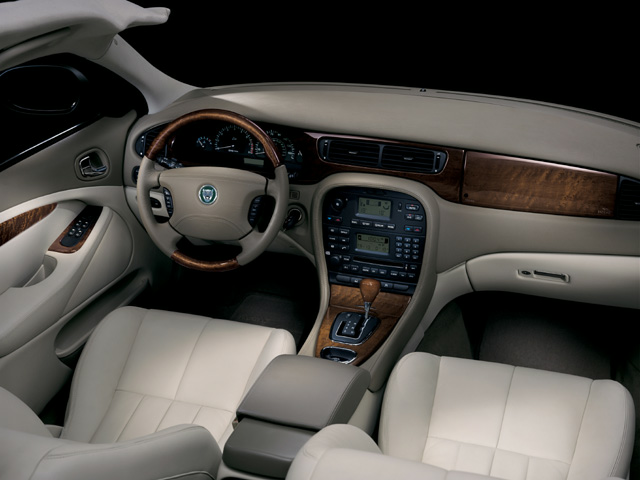 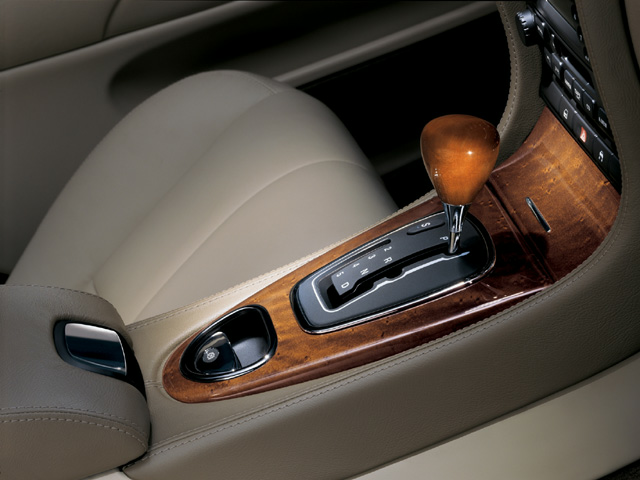 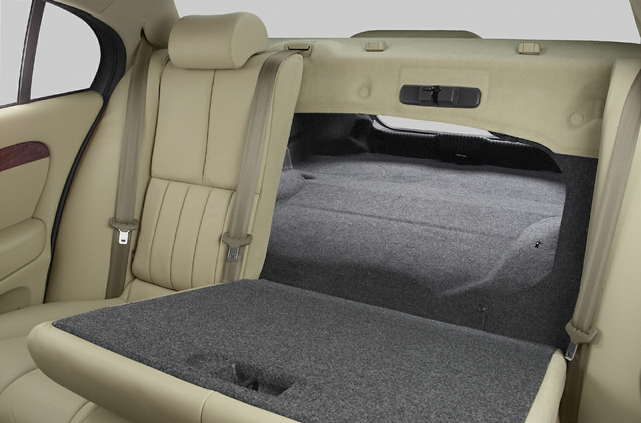 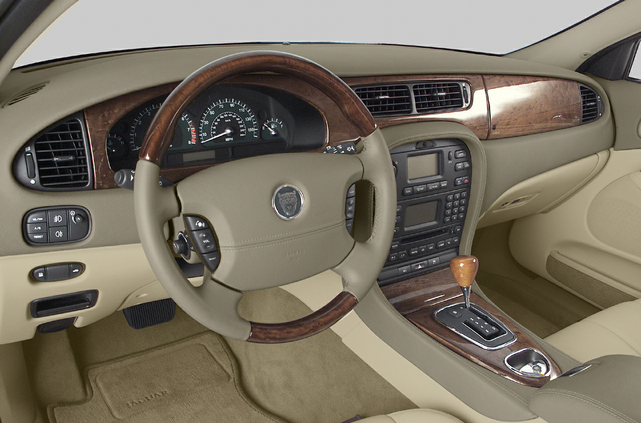 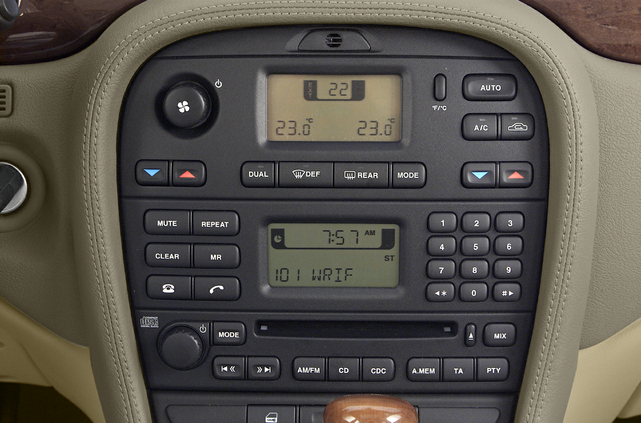 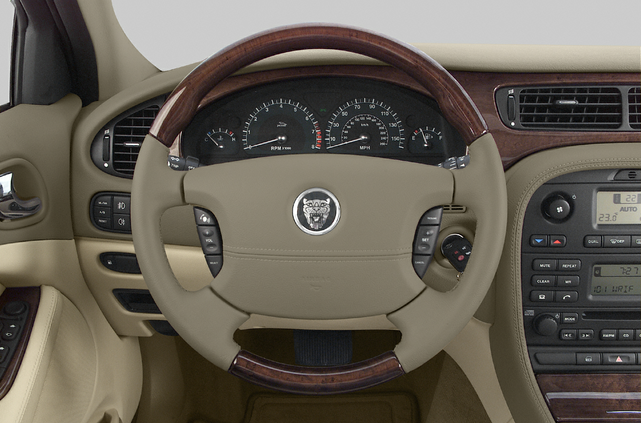 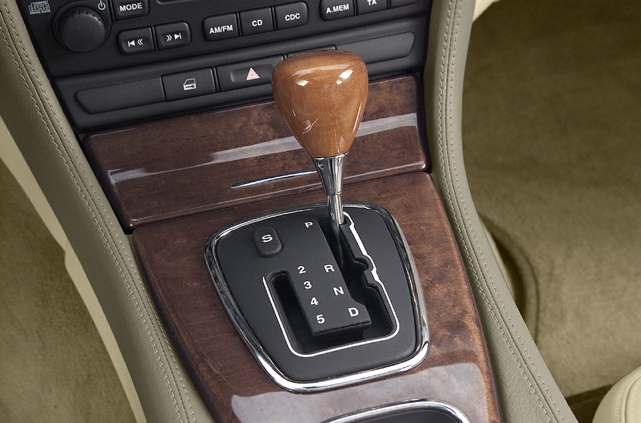 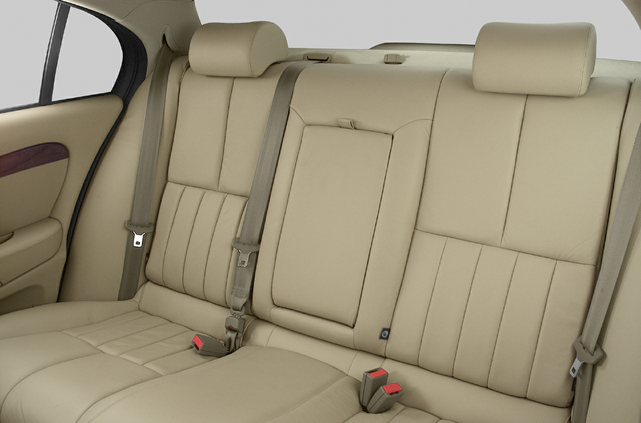 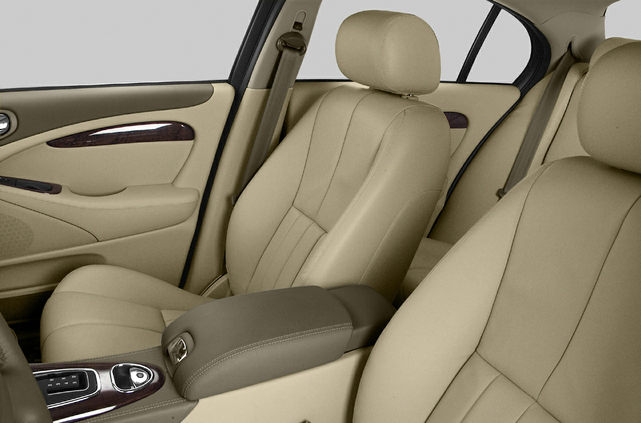 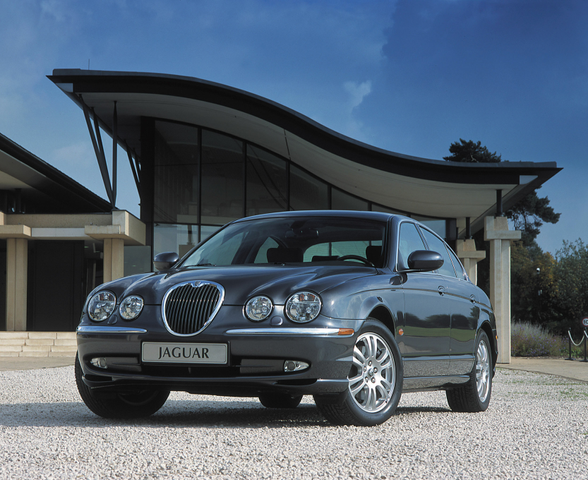