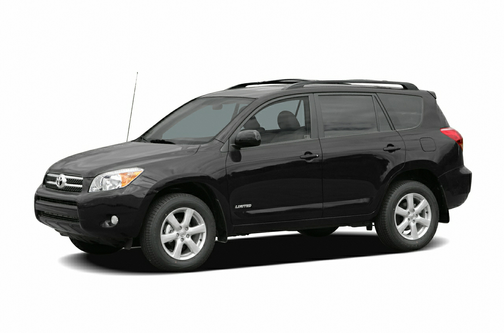 Our 2007 Toyota RAV4 trim comparison will help you decide.

The compact SUV segment is perhaps the most competitive division in the passenger automotive industry today. That means consumers have more models to choose from than ever before. Toyota’s RAV4 was completely redesigned for 2006 and offers a more masculine look than in previous incarnations, although that alone doesn’t push it to the top of the heap.

Toyota has a lot going for it with its new RAV4. There’s tons of cargo room, ergonomic controls, useable storage bins everywhere and — in the V-6 version I tested — plenty of driving thrills. Add on the great mileage and competitive sticker price, and I’m finding arguments against the RAV4 hard to come by.

Exterior
When the Toyota RAV4 was redesigned last year, it received a complete overhaul from its cute-ute past. While a few friends suggested it was still a car for women, I thought my red test vehicle was sporty enough for any man to drive. The large black grille alone said this small SUV meant business.

Gone is the small hood scoop that never seemed appropriate on a non-turbocharged vehicle. Every angle finds sharp lines that are extremely contemporary. The only misstep — and not just in the design department — is the spare tire and cover planted on the rear hatch.

Interior
Toyota isn’t known for daring interior design, and for the most part that remains true in the RAV4, though there are certain elements that try to offer some eye candy. The large, arrow-shaped door handles make a statement, as does the two-tiered center console that houses entertainment functions on the top and environmental controls on the bottom. My sport model didn’t come with dual-zone climate control, and that changes the A/C controls from two sets of buttons to three large knobs. I was more than happy to have the no-nonsense knobs for my week with the Toyota RAV4. Sometimes, simple technology works best.

My test vehicle featured black cloth interior that was comfortable and felt good to the touch. It was soft but gave the impression it would also stand up to some abuse. After a long commute in bumper-to-bumper traffic I had no need for a prolonged stretch and no complaints about my back.

The split backseat wasn’t as comfortable, but it reclines and can be moved forward and back to increase legroom or cargo room, depending on the configuration. This is one of those now-essential SUV features.

Also essential for SUVs — no matter their size — is a lot of cargo room, and boy, does the RAV4 feature cargo room; I was astonished when I looked up the figures. The RAV4 not only has more cargo room than the redesigned Honda CR-V, Mitsubishi Outlander and other compact SUVs, it has more room than the Jeep Grand Cherokee and upcoming Ford Edge, both of which are larger vehicles overall. Toyota can honestly tout its “best in class cargo room” because nothing else comes close. Surprisingly, the RAV4 doesn’t look that cavernous in person; a low load floor and tall ceiling disguise its roominess.

Going & Stopping
My test vehicle came loaded with an optional 263-horsepower V6, and it sold me. If I had to make the choice between the base four-cylinder and the higher-powered and higher-priced V6 — roughly a $2,000 price increase — I’d take the V6.

The gas pedal was as twitchy as Dirty Harry’s trigger finger, and launches from a dead stop offered a surprising rush of acceleration. Even after those jolting take-offs the engine never seemed to run out of power. This is not the norm in the compact SUV market, and both the new CR-V and Hyundai Santa Fe I recently tested delivered much more sedate driving experiences.

On the highway, the engine revved happily to pass and merge, but the power was accompanied by a jolt between gears. The five-speed automatic transmission was definitely not the smoothest I’ve tested, and you’ll know when you’re changing gears. There is no deceptive speed here; when you punch the gas it comes immediately.

The best thing about the V-6 engine? It’s not the performance, it’s the mileage. The EPA-estimated mileage is 21 mpg in the city and 28 mpg on the highway. That’s comparable to many four-cylinder models on the market and on par with the four-cylinder RAV4, which gets 24/30 mpg.

As fun and practical as the engine was, I did not fall in love with the brakes. Toyota really missed an opportunity to deliver a performance-oriented SUV for the masses by failing to improve the brakes. Yes, the RAV4 features antilock brakes and discs on all four corners, but when you hit the brake pedal there’s a mushy response that doesn’t reassure. It’s fine to make the RAV4 speedy, but it needs to come to a halt just as fast.

Ride & Handling
The RAV4 comes in either two- or four-wheel drive. My red tester had four-wheel drive, but it was an automatic, on-demand system. That means power is divvied up between the front and rear wheels electronically depending on driving conditions. When four-wheel drive is needed, the system automatically shifts power so both sets of wheels share the load. When it’s not, power goes just to the front wheels to help with fuel economy. There’s a four-wheel-drive lock button that can be used in off-road situations, but only up to 25 mph.

Because my test vehicle was a Sport trim model, the suspension was adjusted for performance rather than comfort. That definitely impacted the ride, as the Toyota RAV4 Sport felt rougher than the competition I’ve driven, but it was also a lot more fun to drive. Those are choices customers have to make when deciding between normal and Sport models. Don’t let a salesman tell you otherwise; if you want a commuter for good gas mileage and a soft ride, get the standard model. If you want a little more excitement, and the kids don’t mind the bumps, get the Sport.

Features
My test vehicle was nicely equipped, though it didn’t feature leather seats, power seats or steering wheel audio controls. It did have a power sunroof and a pretty decent stereo — add in the V-6, and I don’t think the price tag of $27,784 is that bad. I don’t mind the absence of leather in a utility vehicle; if you’re using the RAV4 the way it’s intended, leather shouldn’t be a concern. For those who feel differently, it’s still an option.

Speaking of utility, the cargo area was one of the best I’ve seen in an SUV this size. If you subtract the horribly annoying side-opening rear hatch, it would probably be one of the easiest to use on the market. Like the Mazda CX-7, the rear seats fold flat via handles placed in the rear cargo area, as well as by handles on the seats themselves. This means that when you’re in a parking lot with a cart full of two-by-fours you can get the space you need without having to open both back doors.

The cargo floor is carpeted but can be flipped over to become a hard plastic floor. This feature is also found on the CX-7, and the Mazda’s is a bit better at fitting flush with the rest of the floor.

Toyota RAV4 in the Market
When you take into account the voluminous cargo room, bevy of features and optional V-6 engine, there’s not a lot in this price range that can truly compete with the Toyota RAV4. The only problem is there are a lot of other small SUVs in this price range, and they all offer unique attributes and styling. In the end I wouldn’t be surprised if people opt away from the Toyota RAV4 simply because of looks, despite the fact that Toyota did a commendable job with the design and improved what was once a diminutive player in the market. Now, it has a speedy, roomy and not-so-bad-looking compact SUV.

Best Car Ever It is qorth evwry penny. Very safe a

My 2007 Rav4 has never given me any major tepair problems. It just rolled over 288,055 miles and its still going stronger than ever. Im about to start shopping for my next Rav4

May 5, 2021
By Bjames from Middletown, Ohio
Owns this car

Paid 10,000 got about a year out of it, around 12,000 miles. I knew nothing about oil consumption problems and when I went to look for my carfax report I had 2 papers a cover paper n a blank paper...!!!!! However I was putting excessive amounts of oil n her a week, and my oil light never came on I could always tell when it started to get low the engine became louder....!

January 29, 2021
By Jaded Toyofan from Halfway, Oregon
Owns this car

This model along with the 2006 through 2011 4 cylinder, and this is for all four cylinder Toyota vehicles, have defective piston rings and their engines will fail.

Rating breakdown (out of 5):
0 people out of 0 found this review helpful. Did you?
Show full review
See all 135 consumer reviews