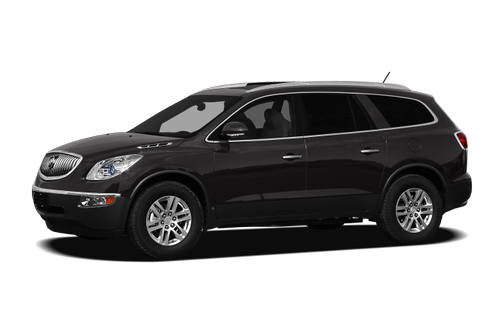 Our 2012 Buick Enclave trim comparison will help you decide.

The Buick Enclave offers three rows of seats standard, with seating for up to eight people. While its sibling, the GMC Acadia, competes with garden-variety Hondas and Toyotas, Buick says the Enclave will go head-to-head with the Volvo XC90 and Acura MDX, among other crossovers.
New for 2012
A hill-hold feature, which keeps the Enclave from rolling backward on inclines, is standard. The Enclave also has an enhanced brake override system, which cuts engine power when the gas and brake pedals are depressed. An accessory power outlet has been added to the center console.
Exterior
The Enclave is about an inch longer than the Acadia and features some traditional Buick styling bits, including a waterfall grille and portholes on the flanks. Exterior features include:

Interior
Buick says the Enclave’s interior strives to emulate that of a private jet. The second-row bucket seats slide forward and back, and the second and third rows fold to provide extra cargo room. Interior features include:

Under the Hood
A 3.6-liter V-6 is the only engine available in the Enclave. It pairs with a six-speed automatic transmission. When properly equipped, the Enclave can tow up to 4,500 pounds. Mechanical features include:

Great vehicle for family of 5

June 7, 2021
By JL Ferguson from Lansing,MI
Owns this car

The Buick Enclave purchased at TCF Auto Wholesales is a reasonably affordable and reliable vehicle, that was backed by a 1 yr powertrain warranty and annual inspections given the vehicles history and past ownership in Canada.

May 5, 2021
By stampoutsatan from Amarillo, texas
Test drove this car

This vehicle is absolutely the most comfortable ride i have ever driven. Drivers seat felt almost ergonomic. And it was very smooth on the road. Also was vwry quiet with all windows up. No air leaks.

I you currently own a Buick or GMC and enjoy having a separate phone number for the vehicle, this option is long gone. Onstar is now more expensive and if you have a smartphone (who does not?) the phone will automatically go to do not disturb once you start moving also if connected with bluetooth it wants to automatically default to Android or Apple CarPlay. These items alone make this purchase (upgrade) a disappointment.

All model years for the Buick Enclave