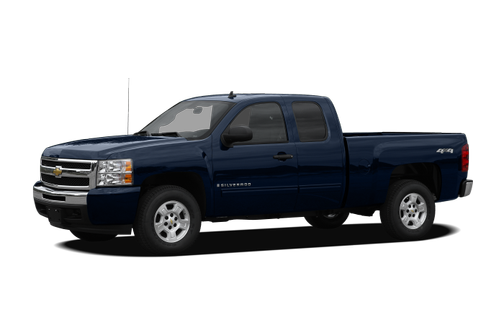 Our 2009 Chevrolet Silverado 1500 trim comparison will help you decide.

Let’s cut to the chase: With a manufacturer in bankruptcy, the idea of buying a Chevrolet Silverado (or any GM model, for that matter) might not fill you with warm fuzzies. Government-guaranteed warranties make the situation better, but they may not be incentive enough to direct a big part of your monthly income toward a new Chevy truck.

Of course, shoppers with that mindset will miss out on what is possibly the best Silverado ever built and, thanks to 2009’s powertrain upgrades, the most powerful light-duty truck on the market. It has a newly available 403-horsepower V-8 with 417 pounds-feet of torque that up until now was only available in the top-level GMC Sierra Denali. But best-in-class power doesn’t always mean best-in-class capability, nor does it mean the Silverado’s legacy eight-cylinder motors are to be considered obsolete. They’re not, especially now that GM offers a new six-speed transmission for the 6.2-, 6.0- and 5.3-liter V-8s. Buyers will have to decide if the 6.2’s extra power is what they need most, though, and extra power alone may not be enough to win many of those battles.

To find out, we tested a four-wheel-drive 2009 Chevrolet Silverado crew cab LTZ decked out with 20-inch chrome wheels, a power sunroof, navigation, the 403-hp V-8 and an assortment of other accoutrements that brought the sticker price up to $46,825. There’s no denying that’s a lot of money, but budget-conscious buyers can take comfort in knowing that a no-frills Silverado starts at about $20,000.

Those enhancements are sure to please a number of truck shoppers, but more significant are the additions of a six-speed automatic transmission and a Vortec 6.2-liter V-8, an engine that until now has been reserved for trucks such as the GMC Sierra Denali and Cadillac Escalade EXT. The small-block is available in Silverado crew cab variants, while the six-cog gearbox can be had with either the 6.2-liter or less powerful 5.3- and 6.0-liter V-8s.

With 403 hp and 417 pounds-feet of stump-pulling torque, the Silverado’s 6.2-liter V-8 gives Bowtie drivers a clear advantage in the light-duty class, outranking not only the Toyota Tundra and Nissan Titan, but also thoroughly redesigned versions of the Hemi-powered Dodge Ram and the Ford F-150. Even Ford’s new 6.2-liter “Boss” V-8 is expected to push “just” 400 horses and 400 pounds-feet of torque, meaning bankruptcy concerns or not, Chevy wins the award for Most Grunt Under the Hood.

Unfortunately, those impressive figures don’t translate to the highest payload and towing capacities in the bunch, and for many truck buyers, capability outranks raw power. With the 6.2-liter V-8, the 2009 Chevy Silverado offers a maximum tow rating of 10,700 pounds (2WD, 3.73 rear axle) and a payload that tops out at 1,909 pounds (2WD, 3.73 rear axle). In comparison, the 2009 Ford F-150, with its 320-hp, 5.4-liter V-8 and new six-speed automatic tranny, hits the worksite with an 11,300-pound tow capacity and 3,030-pound payload. The Toyota Tundra, when equipped with a six-speed gearbox and 5.7-liter V-8 generating 401 pounds-feet of torque, tows up to 10,800 pounds and delivers a 1,990-pound payload. Thanks to the Nissan Titan’s 9,500-pound tow capacity and the revamped Dodge Ram’s 1,850-pound payload limit, however, the Silverado manages to land in the middle of the pack.

If those hard facts don’t endear shoppers to the Chevy, a tap of the accelerator just might. The 6.2-liter V-8 ponies up plenty of giddyup, regardless of whether the truck is at a standstill or lumbering down the highway at 75 mph. There’s plenty of power delivered across the rev range, and for those anxious to replace costly 20-inch tires, the Silverado will lay a thick patch of rubber with little provocation. If it’s not obvious, let’s just say that we enjoyed our time exploiting the 6.2-liter engine’s generous power offering (though we didn’t love the resulting 12.1 mpg quite so much).

Unfortunately, the six-speed automatic left us less impressed. That’s surprising, because we looked favorably upon this unit when it was used in other vehicles (Sierra Denali, Chevrolet Tahoe, Cadillac Escalade). This experience was marred by clumsy transitions from 1st to 2nd gear at slow speeds, and abrupt shifts under heavy acceleration. This might not have been an issue a few years back, but with the availability of smooth-shifting transmissions like the F-150’s new six-speed automatic, it’s one today’s buyers should consider.

Despite being a four-wheel-drive truck, our Silverado LTZ tester was outfitted with 20-inch wheels wrapped in Goodyear Eagle 275/55R20 tires that, not surprisingly, were quick to spin instead of grip during our rendezvous with a few mud pits. Drivers who venture off the beaten path or live in areas with inclement weather will want to go with more aggressive treads. On the pavement in Southern California, the Silverado delivered lots of body roll, and while the steering offered a decent level of heft, it didn’t provide the slightest smidge of road feel. Better response and more communication between the wheel and road would be nice, though those traits aren’t terribly commonplace in the world of pickups. A request for Chevy to dial down the turning radius, however, does seem well within reason.

In terms of unloaded ride quality, the Silverado can’t match the coil-sprung Dodge Ram, but overall the experience could be classified as compliant and composed. As with most full-size, four-wheel-drive pickups, we expected a bothersome level of bounce as the unloaded and stiffly sprung rear end hopped over highway expansion joints. We were pleasantly surprised to discover that the Silverado exhibited little of this annoying characteristic. That’s likely due to the Silverado’s new-for-2009 hydraulic body mounts that sit between the cab and frame under the C-pillar. They dramatically cut the amount of beaming when the truck is empty.

With a sticker price of nearly $47,000 and competition including the new Ford F-150 Platinum, Chevy has to deliver the goods with its Silverado LTZ. Our tester, which benefited from a number of options, like the LTZ Plus Package, combined plenty of must-have features with an interior marked by highs and lows.

The cabin showcased an attractive design graced with materials that represented a huge improvement over previous generations. These included a mesh material on the headliner and visors, matching colors and grains on the pillars, soft-touch windowsills and padded armrests, and rubber grips on the primary controls. Serving to offset these niceties was a bounty of hard plastic in areas that could use a little padding, plus rough, unfinished edges on bits and pieces decorating the doors and center console. Hard plastics have their place in a dirty work truck that needs to be wiped clean from time to time, but the game changes when the MSRP is roughly equivalent to average annual income in the U.S.

For buyers willing and able to shell out that kind of coin, the Silverado LTZ will reward them with leather-clad front buckets that are great for long drives or coddling drivers on bumpy trails. These wide, soft, comfortable seats include multiple power adjustments, as well as heat with three settings and a driver-side memory function.

Drivers will also benefit from an abundance of legroom and headroom. Getting in can be a bit of a hassle because of the truck’s height, but the doors open wide, and there are grab handles for everyone except the driver. Move to the rear seat, and you’ll find accommodations that aren’t exactly best-in-class. The bench offers very soft padding, but thigh support is lacking, the backrest is too upright, the head restraints don’t rise high enough, and legroom is tight — even with a 5-foot, 8-inch driver behind the wheel. Ford’s redesigned F-150 SuperCrew is considerably more spacious.

If Chevy doesn’t have the lock on interior space, it fares only marginally better in terms of storage provisions. The split rear seat folds up to create room for larger objects, whereas smaller items can be housed in front-door and seatback pockets, or in the center console. That large covered box houses a power outlet, yet you won’t find any USB or MP3 jacks in there. For the latter, you’ll need to head to the radio face, which on trucks like ours is part of the touch-screen, in-dash navigation/Bose audio system. Our test truck was devoid of a handy rearview camera (one is available as an option, though), and it had small audio buttons that would be difficult to use while wearing work gloves. Those faults were somewhat offset, though, by the inclusion of current traffic information and steering-wheel-mounted controls. Larger buttons are provided for the climate control’s temperature settings.

The Silverado also deserves credit for its low interior noise levels, with the exception of the 6.2-liter V-8’s rumble. Thankfully, the exhaust has been tuned to offer a pleasant note — one we became particularly fond of. Visibility is also admirable due to the huge side mirrors, small head restraints in back, ample side glass and fairly narrow side pillars. Backing up can be a bit of a guessing game, something that the optional new rearview camera has been designed to address.

Silverado in the Market

This is the best light-duty Chevy truck we’ve driven. Our 2009 Silverado crew cab LTZ delivered gobs of power, a competitive six-speed transmission, a relatively quiet and comfortable ride for front-seat occupants, and respectable towing and payload ratings. And don’t forget about the 5 year / 100,000-mile powertrain warranty.

Unfortunately, if you need to get your truck serviced, you may just find that the dealer you bought the truck from or the one around the corner from your house has disappeared, given GM is planning to close 40 percent of its 6,000 dealerships by October 2010 — and that’s just one obstacle facing the Silverado. Its respectable tow rating is nonetheless outmatched by the less powerful F-150 and Tundra, and the Chevy lacks innovative features like Dodge’s Ram Box and Ford’s bed steps. There’s also a dearth of refinement considering the truck’s $46,825 as-tested price. To top things off, the aging, 317-hp Titan offers a greater payload capacity.

The hard truth is that despite being the best Chevy, the 2009 Silverado just isn’t the best truck.

I keep having issues with the dod

June 9, 2021
By Snoie from Amarillo Texas
Owns this car

I've been having lifter problems since I bought it with 170 showing and one stuck currently. My 2002 wore out at 850k now I have this money pit

May 7, 2021
By DavidLParkerJr. from Portage, IN
Owns this car

This truck meets all my needs I just love it my wife picked it out for me. It is very clean on the inside well taking care of. The truck really drives well.

Maybe good but not this one

April 16, 2021
By Frenchy from Kiefer Oklahoma
Owns this car

Truck may have gasket or cracked head problem. Need to be fix because they sold it with this problem without fix it after the inspection.

Rating breakdown (out of 5):
0 people out of 0 found this review helpful. Did you?
Show full review
See all 84 consumer reviews