Our 1995 Chevrolet Suburban trim comparison will help you decide.

If you would like to see the U.S.A. in a Chevrolet this summer, I recommend the diesel-powered Suburban, Chevy’s biggest and most expensive rig.

I recently racked up 2,010 miles in a week rambling through the Midwest on an antique-hunting expedition. I drove a gorgeous dark-red, four-wheel-drive 1995 Suburban from Detroit to Willmar, Minn., and back.

What a terrific vehicle for extended highway cruising.

And what a surprise.

You may remember that General Motors nearly made the diesel engine extinct in the New World when it tried to foist upon car buyers its line of poorly designed diesel-powered Oldsmobiles, Buicks, Cadillacs and Chevrolets in the late 1970s and early ’80s.

In fact, those first GM diesels were so bad that they ended up souring U.S. car buyers on diesel engines altogether.

That legacy endures. Even Mercedes-Benz – which made its reputation on the dependability and durability of its diesels – offers just one diesel-powered car in the United States. And it’s a slow seller.

But GM engineers have learned much about diesels in the last 15 years.

The engine in the Suburban comes with a five-year, 100,000-mile unlimited warranty – the longest of any GM engine. Want more proof that GM can build a good diesel? The same basic engine used in the Suburban powers military versions of the Hummer, the Army’s all-terrain, all-purpose vehicle.

I know that there is probably nothing I can say that will ever make you consider a GM diesel if you owned one of the original clunkers. However, if you can put aside your fears long enough to take a diesel-powered Suburban for a drive, I really think there is a good chance it will win back your trust in GM’s ability to design and build things right.

The 190-horsepower V-8 bolted to the Suburban is turbocharged and fuel-injected. And unlike GM’s previous diesels, this one was not converted from a gasoline engine; it was designed from the start as a diesel.

The big V-8 doesn’t run as smoothly and quietly as a gasoline-powered engine – what diesel does? – but GM’s oil-burner is a very civilized, efficient and capable power plant that produces far less noise and vibration than you would expect.

Unlike many diesels, the Suburban’s 6.5-liter engine does not belch smoke, not even under heavy stress. The only time I saw exhaust smoke was when I started the Suburban in the morning, and even then there wasn’t much.

If you’ve driven a diesel-powered vehicle, you know that performance generally is not as good as what you would get with a gasoline engine.

This does not hold true with the Suburban.

Chevy’s mechanics tuned the diesel engine to deliver plenty of power at low speeds, so response from a stop is very comparable to the standard 5.7-liter V-8 gas engine. Also, the turbocharger gives the engine enough of a boost so that it has the muscle to easily pass traffic at highway speeds. The turbocharger is essentially a pump that is driven by exhaust gases. It forces more fuel and air into the engine, which boosts power without using more fuel.

The diesel Suburban’s overall performance is not much different than the gas-powered version, except in one area – fuel economy.

You might think the Suburban would need an umbilical cord to its own private fuel refinery since it weighs 5,159 pounds.

But our test vehicle delivered 22 mpg on the highway. That’s nothing less than an engineering miracle; I know of no other huge vehicle that extracts as much energy out of a gallon of fuel.

Once you reach about 65 mph on the highway and set the cruise control, the diesel engine settles into an effortless groove and the Suburban devours the miles. The engine turns over at roughly 2,000 rpm at highway speeds.

The Suburban’s 42-gallon fuel tank means that you can go about 800 miles between pit stops. This is one of the Suburban’s most endearing traits; you don’t often havet o worry about fuel. There probably isn’t an 800-mile stretch of country without a diesel pump in it. I filled up at truck stops, pulling in behind the big rigs. Diesel averaged about $1.10 per gallon, a bit less than the least expensive grade of unleaded gasoline.

It was on traffic-choked Interstate 94 in Chicago where the diesel really won me over. On a good day, you might spend an hour driving through metropolitan Chicago. Traffic there makes Interstate 4 at rush hour look like a minor inconvenience. On a bad day in Chicago, such as during rain or if there’s an accident, you’ll spend two hours rolling along at between 5 and 10 mph.

I blew into Chicago on a rainy day and paid the price. I chugged along painfully, never moving fast enough for the four-speed automatic transmission to shift into third gear. Yet the diesel engine purred like a tiger; the temperature gauge never budged off its normal 180-degree perch.

Our test Suburban was a four-wheel-drive model, but because I didn’t take it off the road, I didn’t use the four-wheel drive system.

Despite its massive width, length and weight, the Suburban is an easy vehicle to drive – in most instances.

The Suburban has a power-assisted steering and brakes and a firm suspension system that takes the hard edges off bumps.

The Suburban’s weak point is that it can be hard to maneuver in tight places. Also, U-turns can be difficult on narrow streets. Chevy says the Suburban will turn a circle in 48.5 feet. That’s massive (most passenger cars can turn a circle in about 38 feet or so). I tried to parallel park on a crowded street in Ann Arbor, Mich., and found that it takes a bit of finesse and patience as well as good coordination. The size and the large turning radius means that you may have to park in uncongested areas that let you drive straight in and out.

The steering wheel has a firm feel, making the Suburban very responsive when it comes tochanging lanes and making gentle turns. There is little or no play.

The front disc/rear drum brakes that are standard with a four-wheel anti-lock system are excellent. During fast stops, the Suburban remains easy to control. The front end doesn’t dive under maximum braking, and if you press the pedal hard enough to engage the ABS, the Suburban slows quickly and in a straight line.

The Suburban is at its best on long highway trips. Crosswinds didn’t affect it during our journey; not even passing semitrucks affected the Suburban’s solid stability.

There is no other vehicle I’ve driven that I like better than the Suburban diesel for a long trip.

You can sit in the Suburban’s comfortable cloth driver’s seat for hours and not feel fatigued. I logged 700 miles in 13 hours in one day, and I felt fine.

The seat seems soft at first. You settle down an inch or two, then the seat’s cushion firms up as the padding conforms to and supports your body. The only improvement needed are headrests that tilt forward instead of just going up and down.

Our test vehicle featured a bench seat up front with a large comfortable armrest in the middle and two rows of bench seats in the back.

The rear seats can be folded and moved in numerous directions so that the Suburban can accommodate up to nine passengers and cargo. I easily stuffed three antique bicycles in the rear by folding the third bench seat forward.

When you are driving such a large vehicle, visibility is very important. And this is where the Suburban could be improved. Visibility through the rear isn’t great for two reasons: The vehicle is so long that it is sometimes difficult to accurately judge traffic behind you. Backing in to a parking space, for instance, is not easy. It takes awhile to get used to the Suburban’s proportions. Also, the two rear swing-open doors have thick frames that join in the middle. They block about 30 percent of the view out the back.

The Suburban is equipped with two huge outside mirrors that provide excellent views to the side and rear of the vehicle.

As far as f it and finish, our test vehicle was simply flawless. More than that, I feel as if the Suburban is one of GM’s best-built, best-designed products.

The attractive, durable cloth on the seats, the thick carpet, the feel of the switches and the styling of the analog gauges can be summed up in two words: first class.

If the price of this test vehicle is a bit much for your budget, consider a Suburban with fewer options.

The basic gasoline-powered two-wheel drive Suburban starts at about $22,000. You’ll spend another $2,860 for the diesel engine. But you’ll get air conditioning and several power accessories.

Our test vehicle had a two options packages that included such things as a locking rear axle, rear air conditioning/heating system, special wheels, chrome bumpers and other things that pushed the price over $30,000.

If you need a comfortable and dependable vehicle that can economically move a lot of people or cargo over long distances, I am convinced you won’t find a better vehicle than the Suburban.

Truett’s tip: The diesel-powered Chevy Suburban is a terrific long-haul vehicle. It is amazingly comfortable, roomy and well-built, and it’s a joy to take on long trips.

For the age and condition it?s pretty amazing. Arizona weather and a garage keeps vehicles in pristine condition. If you want a great 4x4 family truck for under $10k... This is the truck for you.

This truck is the best vehicle I've ever owned. Even at almost 300,000 miles, it's still running strong. I give it monthly maintenance, and I expect another 300,000 with no problem.

Awesome! Would like a newer one. These engines are built to last a lifetime. Great for space, traveling, hauling, towing etc..... 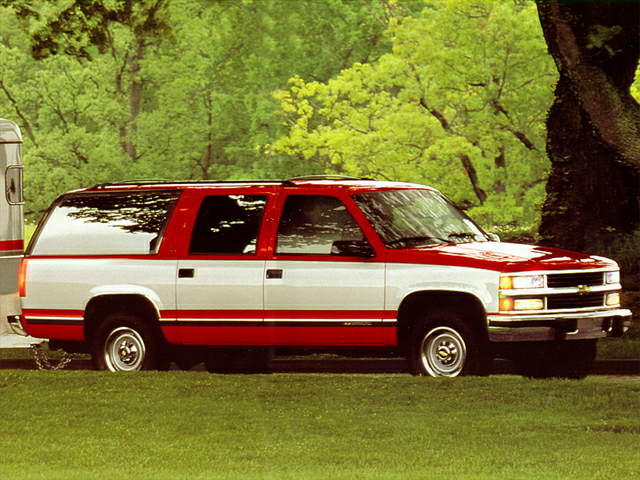