Our 2017 Chevrolet Traverse trim comparison will help you decide.

The verdict: The 2016 Chevrolet Traverse offers generous cargo space and passenger room, but truck-like handling and an irritating multimedia system are major weaknesses.

Versus the competition: When it comes to things like diamonds and vacations, bigger is almost always better. When it comes to three-row SUVs, that's not always the case — especially where Chevrolet is concerned. In Cars.com's $40,000 Three-Row SUV Challenge, the 2014 Traverse went head-to-head with several rivals — including the Toyota Highlander, Dodge Durango and Hyundai Santa Fe — and landed at the bottom of the pack. For 2016, the only change of note is the addition of standard 4G LTE connectivity and Wi-Fi hotspot functionality (data subscription required). Compare the 2015 and 2016 Traverse models here, and see how the Traverse compares against three of its competitors here.

Editor’s note: This review was written in October 2015 about the 2016 Traverse, but little has changed with this year’s model. To see what’s new for 2017, click here, or check out a side-by-side comparison of the two model years.

Imitation is the trend in the three-row SUV class, with many shared styling cues homogenizing the segment. The Traverse is no exception. It wears a broad version of the brand’s trademark grille and the sloping roofline and shapely silhouette popular with the rest of the class. The overall look is clean and polished, if unexciting.

The Traverse is big and drives like it; it’s heavy and has a larger turning circle than the competition, which hurts maneuverability. It does not do well in delicate situations like parallel parking or weaving through grocery store parking lots. Three-row SUVs are great for carting around a truckload of passengers, but I don’t want to feel like I’m actually driving a truck.

Power from a stop is adequate and builds slowly — and gracelessly — on the highway. Shifts from the six-speed automatic are often rough, and there’s an audible strain from the powertrain as it musters up to speed. The 281-horsepower, 3.6-liter V-6 is EPA-rated 17/24/19 mpg city/highway/combined; all-wheel drive pushes it down to 16/23/19 mpg. Large SUVs are not especially fuel-efficient, but the Traverse is at the bottom of the pack compared with base, two-wheel-drive V-6 versions of the Santa Fe (18/25/21), Durango (18/25/20) and Highlander (19/25/21).

Handling feel on the highway is numbed by heavy, dull steering. Ride quality is on the firm side, with a fair amount of jolt even over small bumps. My test model’s 20-inch wheels likely contributed to its overall rigid feel; 17-inch wheels are standard.

The top LTZ model’s cabin impresses, with classy wood trim and contrast stitching on the leather seats and dash, as well as padding in all the right places. I especially appreciated the extra-comfy sliding center console armrest. Two issues marred the otherwise pleasant cabin: a persistent rattle from the driver’s side door panel at highway speeds and a scraping sound from the steering wheel at lower speeds.

My test model was equipped with second-row captain’s chairs. They’re much harder and flatter than the front seats, likely because of the unique way they collapse and fold for excellent access to the third row. In terms of room, passengers in the second row will have enough space to stretch but won’t be able to share much with the folks behind them. By the numbers, the Traverse offers 36.8 inches of legroom in the middle row. That’s less than the Santa Fe (41.3), Durango (38.6) and Highlander (38.4).

The third row is as far from excellent as it gets. By the numbers, it bests competitors in terms of headroom and legroom, but sitting back there is a punishment; the seat is flat and hard. It’s also raised quite a bit, requiring passengers to sit in an awkward, knees-up position. Lastly, the ambiance is cave-like. Small, angular side windows limit the view and make for a claustrophobia-inducing ride overall.

The Traverse’s 6.5-inch touch-screen is like a tiny sparrow nestled in an enormous tree. The small screen looks inadequate in such a large area, and it turns out to be when you try to use it. The Dodge Durango’s available Uconnect multimedia screen is 8.4 inches; Hyundai’s and Toyota’s are also 8 inches. But size is only one of its problems.

The system itself is temperamental: The touch-screen is flanked by touch-sensitive buttons that have a mind of their own. Sometimes the screen and button panels register and respond to touch inputs, sometimes they don’t. I often had to hit the screen or the surrounding buttons more than once — just one frustrating step among many.

I used the available navigation system throughout my test weekend. Inputting a destination was simple (when the screen actually registered my inputs), but canceling route guidance was complicated. The multiple-step process was difficult to do while driving.

There were a few bright spots, however. Pairing my Android smartphone was quick and painless, and streaming Pandora internet radio was easy. And best of all, like a surprise lollipop after a visit to the pediatrician, the Traverse prevented an ugly toddler meltdown with its 4G LTE wireless hotspot capability. Streaming “Despicable Me” to a tablet … Saved. The. Day.

Small-item storage is just OK. There’s a small center console storage box, a couple of shallow bins in the first row, and a pair of small, uncovered cubbies in the third row.

But here’s the elephant in the room — or the trunk, rather: Despite the Traverse’s shortcomings, it kills it in cargo capacity. Behind the third row, there’s 24.4 cubic feet of space, handily besting competitors by several cubic feet.

The 2016 Chevrolet Traverse got a five-star overall safety rating from the National Highway Traffic Safety Administration, the agency’s highest score. In Insurance Institute for Highway Safety testing, the Traverse received scores of good (out of a possible good, acceptable, marginal and poor) in all tests to which it was subjected, which excluded the small overlap front crash test. Missing this test disqualifies it from Top Safety Pick status. The Dodge Durango and Hyundai Santa Fe also got good scores in all tests except the small overlap front test, where they both earned a marginal rating. The Toyota Highlander earned an acceptable rating in this test.

A backup camera is standard in the Traverse, and an airbag that inflates between the front seats during a side impact is optional. Other optional safety systems include blind spot warning, rear cross-traffic alert, lane departure warning and forward collision alert. An auto-braking function is not available. Click here for a full list of safety features.

In the second row, two child-safety seats installed easily and fit well thanks to accessible lower Latch anchors. The third row does not have any lower Latch anchors but does have one top tether anchor for a forward-facing convertible car seat. Read more in our Car Seat Check.

The 2016 Chevrolet Traverse starts at $29,595, including destination; my top-of-the-line all-wheel-drive LTZ test car was just over $47,000. Although well equipped with safety features and creature comforts, it did not include push-button start, which many midtrim budget vehicles have.

The Traverse undercuts many competitors in price, however. Base V-6 versions of the Durango, Santa Fe and Highlander start a couple thousand dollars higher, but offer better road manners and less frustrating multimedia systems.

If “big” is the No. 1 priority on your three-row SUV shopping list, the Traverse easily checks that box, but many competitors offer a better blend of driving comfort, room and features.

I love my new car. It rides smooth and has lots of room. It is very clean and is everything I was looking for. It even came with a remote start

Rating breakdown (out of 5):
3 people out of 4 found this review helpful. Did you?
Show full review
4.6

I purchased this car and love everything about it. Plenty of place and seating for the family and stylish so it doesn’t look like a mom van.

Rating breakdown (out of 5):
5 people out of 5 found this review helpful. Did you?
Show full review
See all 189 consumer reviews

All model years for the Chevrolet Traverse 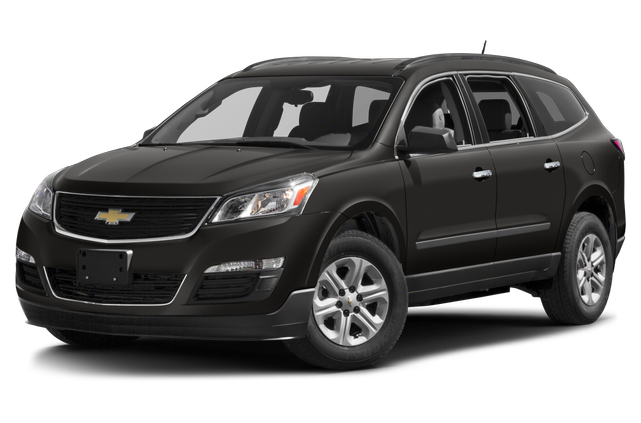 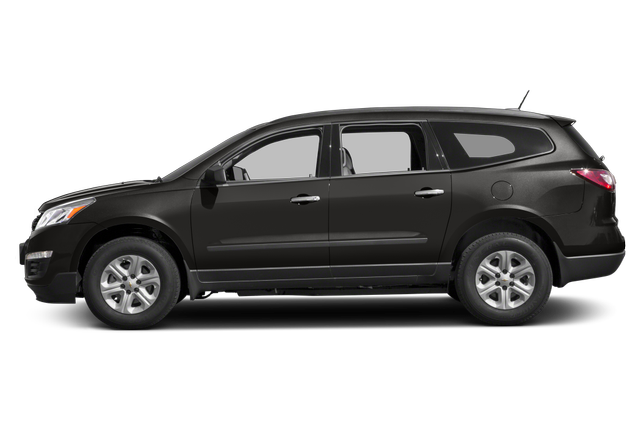 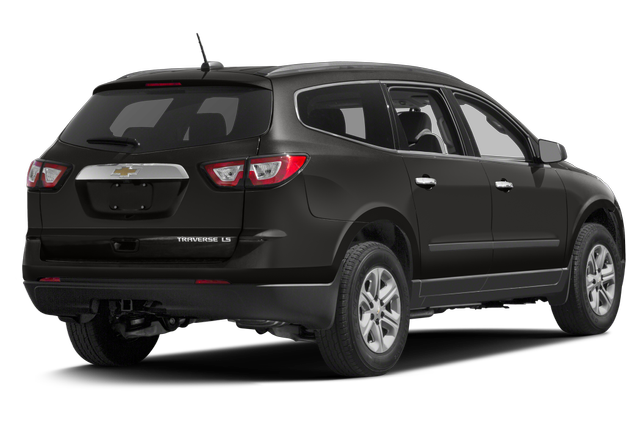 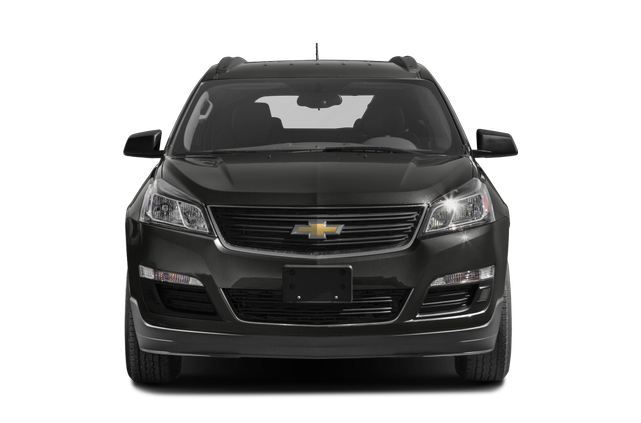 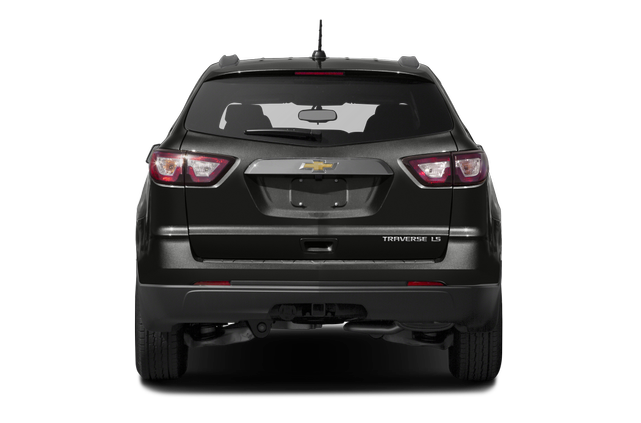 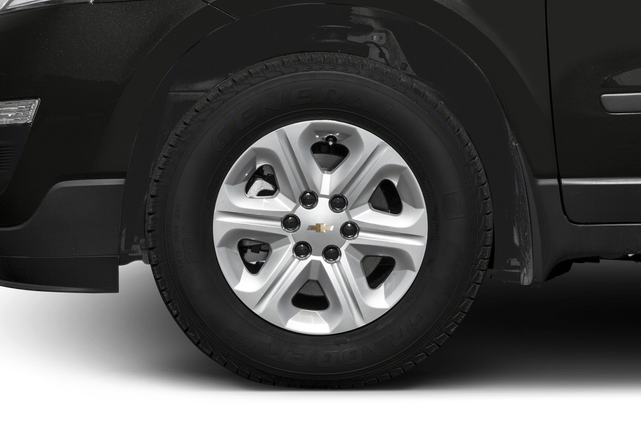 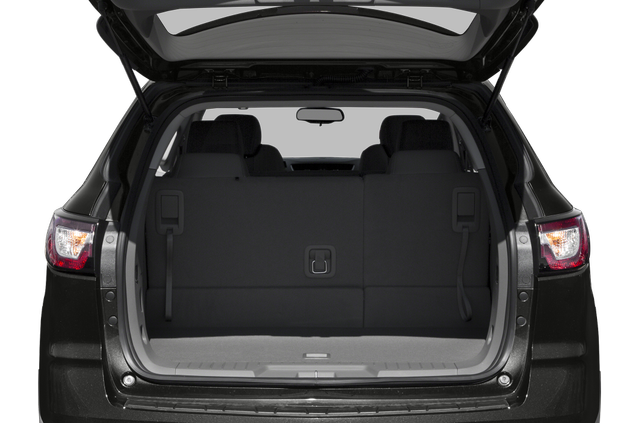 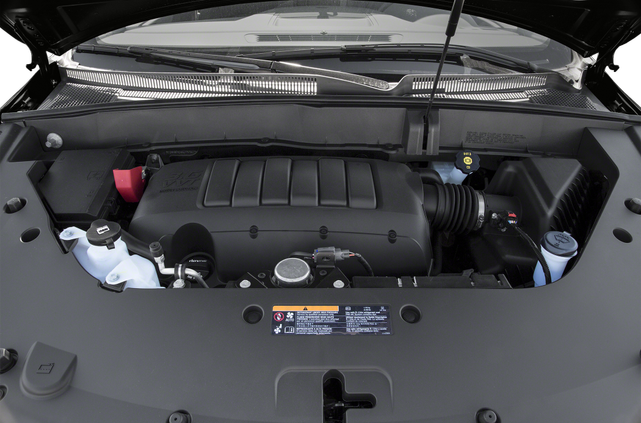 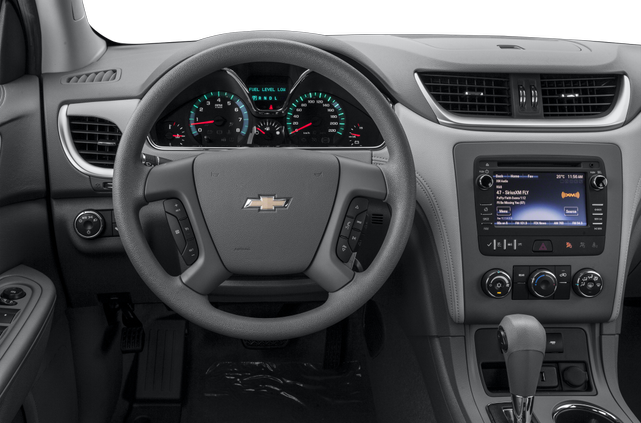 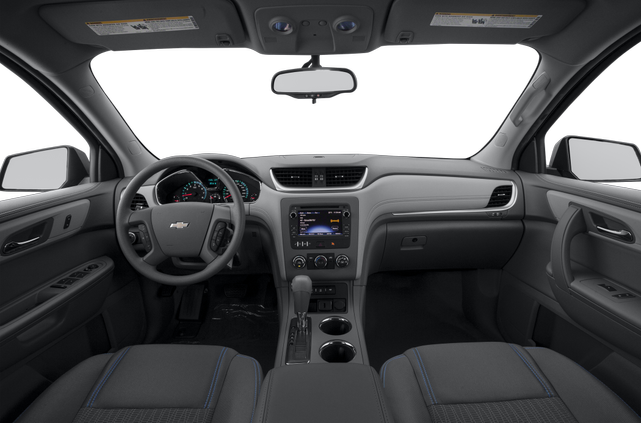 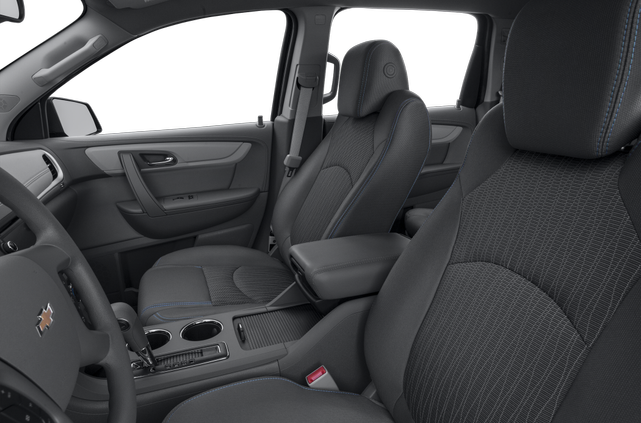 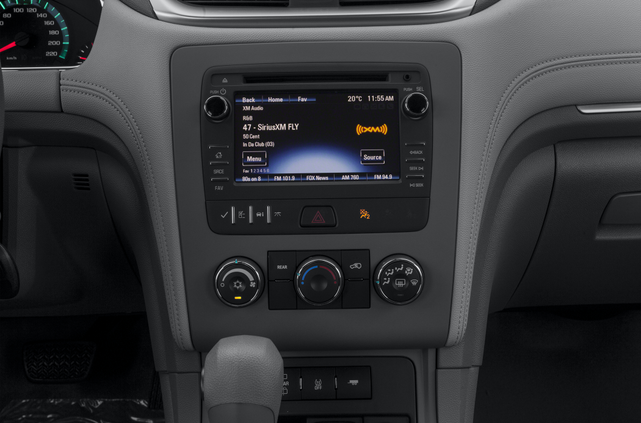 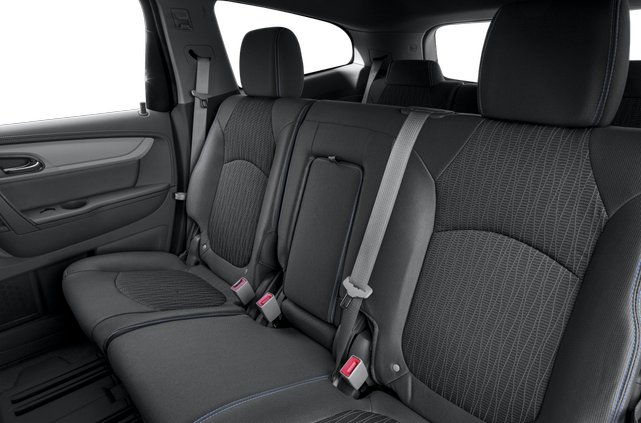 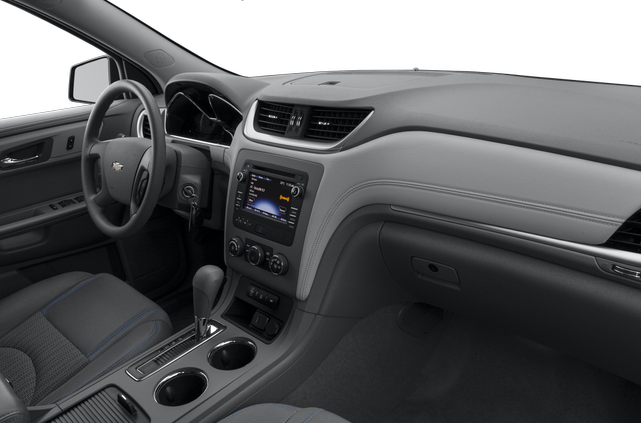 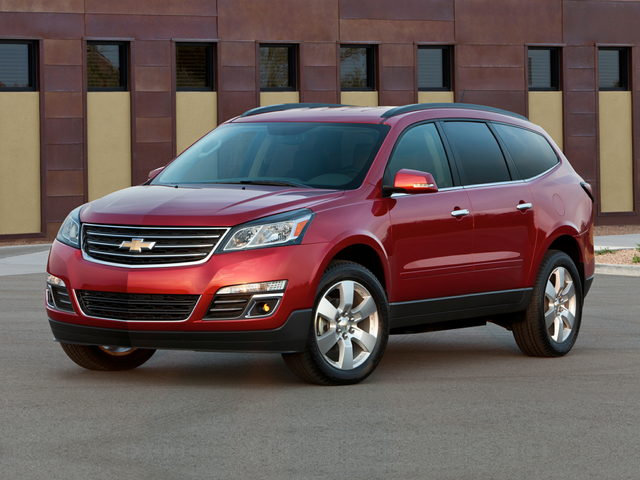 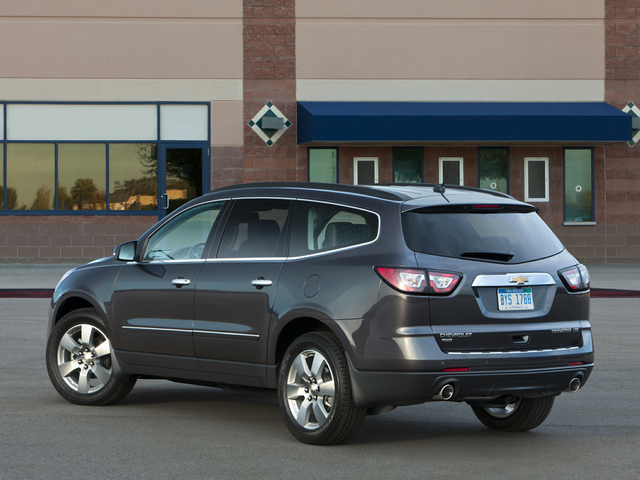 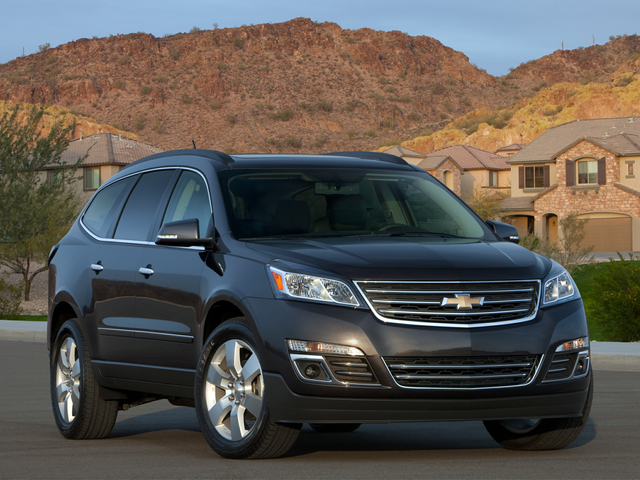 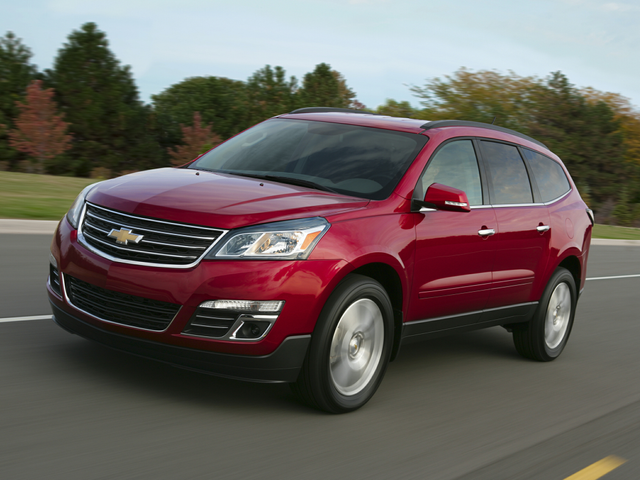 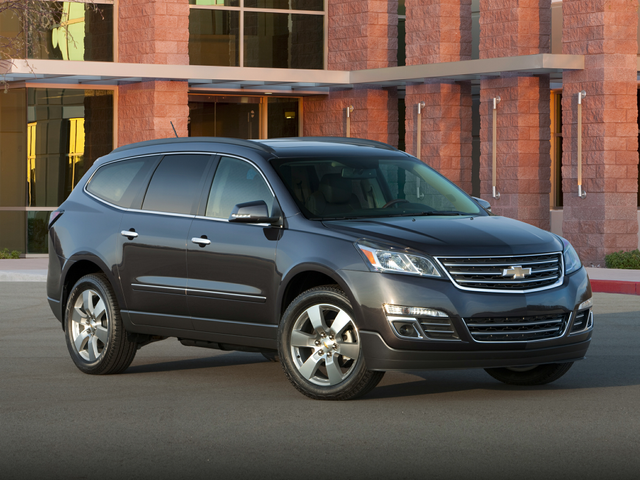 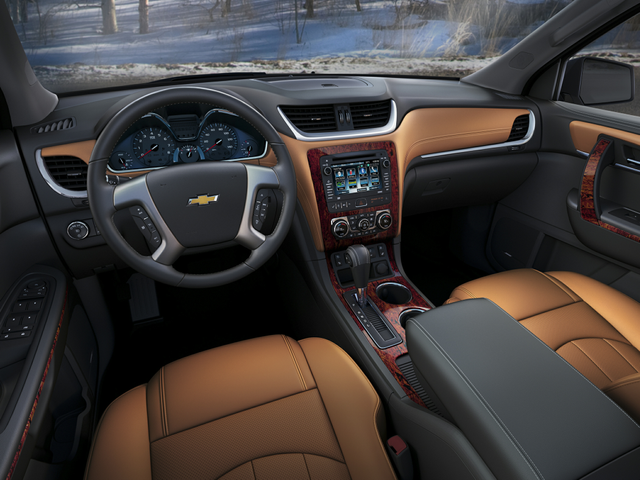