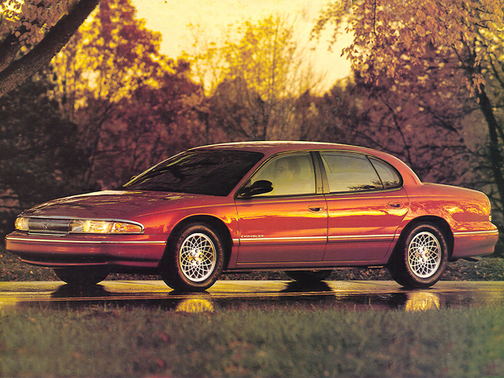 Our 1994 Chrysler New Yorker trim comparison will help you decide.

It was apropos that the new 1994 Chrysler New Yorker and the 1993 Buick LeSabre arrived in the driveway at the same time.

LeSabre was decked out in 90th anniversary trim to commemorate Buick’s 90 years in business. To celebrate, an $18,999 price tag was put on the vehicle, $2,000 less than it would have been priced with the same equipment.

New Yorker also was a commemorative model, but not by intent. The larger offshoot of the Chrysler LH sedans-Chrysler Concord, Dodge Intrepid and Eagle Vision-represented the first time in memory that the automaker had come out with a big car that could compete with those from GM and Ford.

About the only thing all those New Yorkers had in common was that they represented the top of the line-save the Imperial-at Chrysler. The New Yorker was supposed to be the best the automaker had to offer, the piece de resistance. There were years, however, when New Yorker was built off the K-carplatform and other than shinier paint and a stiffer price tag, it was a piece to be resisted.

A tip of the hat to Thomas Gale, Chrysler’s chief designer, for coming up with an offshoot of the LH sedans that doesn’t look like a carbon copy and canstand on its own styling merits.

While the chapeau is off, give a second tip to Francois Castaing, chief engineer, who took the mechanicals from the LH sedans, tweaked the suspension a tad and came up with a car that acts even more aggressively than the LHs yetfeels in better control of the road.

While you’re at it, tip the cap to Trevor Creed, head of interior design for Chrysler, for adding just the right complement of ordinary items, such as fold-from-the-roof coat hooks, fold-from-the-roof grab handles to help you slip out the doors and fold-down armrests with built-in cupholders.

And, of course, tip the sombrero to Lee Iacocca, the now retired head honcho who gave the go-ahead to the project aimed at giving Chrysler a respectable full-size car.

As long as the cars were side by side, we gave the styling a lengthy study.LeSabre is the choice over New Yorker in styling based on a few quirks we hopeChrysler changes. New Yorker has two huge taillights in back that make the rear end look paunchy. LeSabre runs the lights the width of the rear end, which has a slimming effect. LeSabre also has a deck lid lip that adds a sporty touch.

Also, the rear window on the New Yorker is very rounded, which adds to its bulbous behind, and it is accented with a thick black strip that leaves the impression the rear view is obstructed-although it isn’t.

New Yorker, however, has flush, body-colored door handles, whereas LeSabre goes with the decades-old chrome handles raised out from the door. One featurewe wish Chrysler would change immediately is the lock on the deck lid. The lock is big enough only to slip a key into, and there’s almost no chrome or metal protective ring to keep the lid from getting scratched when you try slipping in the key while your arms are full of packages, luggage or golf clubs. Perhaps a pentastar logo surrounding the key lock would help prevent nicks and scrapes.

To sum up the design of the GM and Chrysler cars, both are rounded and aerodynamic and offer body-colored bumpers and bodyside moldings and, in truth, look somewhat alike.

Both offer excellent interior room, with LeSabre getting the nod for head room, New Yorker for leg room. LeSabre also gets the nod for comfort. The front seats point up New Yorker’s biggest shortcoming. The seats are s tiff as plywood, with no give. You could drive from New York to Los Angeles in the LeSabre without twitching once in search of a soft spot to take the pressure off the back. New Yorker is like sitting on a concrete park bench. A $24,000 car should not act that way.

LeSabre, however, places the light switches on the upper driver’s door at just about where the door meets the instrument panel. Clever, but if the switches were put on the instrument panel, Buick could move the power window/seat buttons there from the armrest. A thinner armrest would add to driver and passenger leg room.

New Yorker puts the power mirror controls where LeSabre has the light switches in the door. So that’s one less item on the armrest and that means it’s thinner and allows for more hip room.

Both cars enjoy cavernous trunks, big enough to store a couple sets of clubs and perhaps even the pro.

The suspension on both provides the right mix of firmness without being stiff and softness without being mushy. New Yorker, however, is the better of the two with almost no body lean or sway in tight corners and turns.

In fact, most of the time we could accelerate in the corner with New Yorkerwhile easing a bit on the throttle with the LeSabre. New Yorker came with traction control, which provided the road-hugging capabilities whether taking off from a stoplight on wet pavement or moving aggressively through twisting roadways when the blacktop was dry or wet. Traction control is to moving what anti-lock brakes are to stopping. It’s a $175 option on the New Yorker and oneof the first extra-cost goodies you should check off in the plus column.

When it comes to concern for safety, both cars offer a standard driver-sideair bag. New Yorker goes LeSabre one better by offering a passenger-side air bag as standard, too. LeSabre offers no passenger-side bag.

The New Yorker also stands out in terms of performance. We were very pleased with the response of LeSabre’s 3.8-liter, 170-horsepower, V-6 until wegot behind the wheel of the New Yorker with its 3.5-liter, 214-h.p., 24-valve,V-6. It’s far more muscular and takes you from the light or into the passing lane much more quickly.

What impressed us the most about the New Yorker versus the LeSabre was the car’s road presence and its ability to act more aggressively in terms of both a livelier, more responsive suspension and powertrain depending on highway conditions as well as the mood of the driver.

By the way, when it comes to acceleration, both cars were smooth and quiet,but the New Yorker was quiet to the point of being eerie. LeSabre has the edgein terms of mileage, with a rating of 19 miles per gallon city/28 m.p.g. highway to New Yorker’s 18 m.p.g. city/26 m.p.g. highway.

Each has a couple of annoyances. LeSabre has phony side-vent window design,which was done because the expanse and curve of the glass was too big for a single window. The problem is that the outside mirrors were brought up ahead of the vents because there would be a blind spot if they were in back of the vents. So the mirrors have to be adjusted at an abnormal angle and don’t allowall the side vision they could.

New Yorker also has a mirror problem. If the rearview mirror was an inch wider, it would provide much better sight lines when looking back and to the right in passing maneuvers.

When it comes to the goodies, the New Yorker excels, with pullout extensions from the visors to block glare from the side; adjustable shoulder belts so you need only push a button to raise or lower the strap to keep it off your neck; wide-opening front and rear doors for minimal effort getting into or out of the seats; a novel turn indicator lever that requires almost noeffort to use.

Both cars offer dual cupholders; LeSabre’s swing out from the armrest a nd New Yorkers are built into the armrests.

Base price of the New Yorker is $24,294, or $5,850 more than the LeSabre. With a $1,306 preferred option package consisting of automatic temperature control, a radio upgrade to add cassette player, illuminated entry system, andoverhead console with time/temperature/miles-to-empty readings; traction control at $175, a compact disc player at $169 and a full-size spare tire at $95, the sticker ran up to $26,039. Add $585 for freight, but subtract $209 for option discounts and the final price is $26,415

New Yorker is a piece of art from a company that for far too long dealt in paint-by-number sets in the full-size market segment. However, it’s a bit pricey. When Chrysler dominated the utility-vehicle market with its Jeep Cherokee, it got carried away with the sticker. That allowed Ford to lure buyers away with its Explorer. Chrysler should remember that with its New Yorker.

Incredible Value in a Large Sedan

April 6, 2019
By HoustonReal from Houston, TX
Owns this car

A limousine-like, stretched sedan. A size that is no longer offered in any comparable American model. Good performance and luxury features at a very reasonable price.

Bought it 7 sears ago when it had about 90K miles. It's a bit tired and high maintenance now with 220K miles.

it has been agood car for the most. i have had electronical problems such as defective gages. major problem air and blown head gasket. has great speed and power. It is a beautiful car and comfort.

All model years for the Chrysler New Yorker 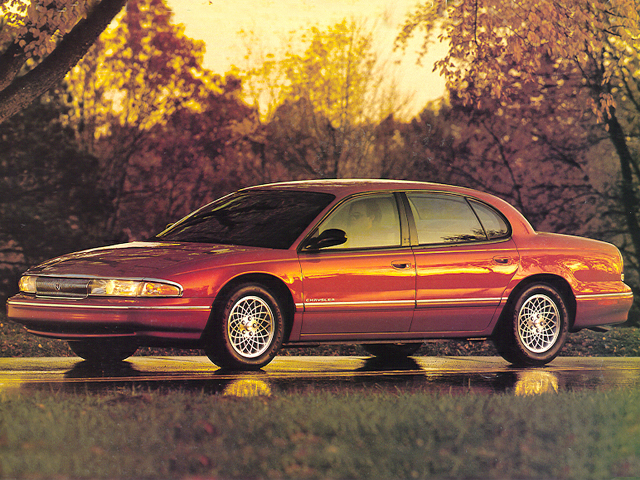