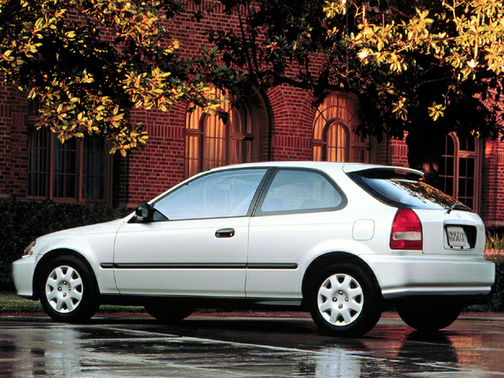 Our 1999 Honda Civic trim comparison will help you decide.

The Si is Honda’s Civic lesson for the year.

If young drivers are sinking their hard-earned bucks into hopping up Civics, why shouldn’t the factory build one of its own? Enter the 160-horsepower Civic coupe Si. The price of $17,445 includes AM/FM/CD, power sunroof and air conditioning. Also standard are a keyless remote, power mirrors, power windows and cruise control.

Hopped-up Civics are most prevalent in southern California, where automotive trends often show up first. Troll the freeways of Los Angeles and you can see countless Hondas lowered so far they look like they are riding on coasters. With exhausts the size of drain pipes and ultra-low profile tires on trick wheels, Civics are to this generation what the ’57 Chevy was to baby boomers.

While the factory version doesn’t have the radical looks of the SoCal street rods, it is modified to boost both straight-line performance and road holding. It zips through the gears like a four-wheel motorcycle and darts around corners like it was being chased by demons.

The transversely mounted, all-aluminum 1.6-liter, 4-cylinder engine that drives the front wheels revs to 8,000 rpm. It has dual-overhead-cams (DOHC), four valves per cylinder and a high compression ratio. The exhaust system has larger pipes, too.

Despite its high output, this engine feels smooth and free of vibration.

High-rpm engines are Honda’s signature, a fact likely traceable to the company’s long history of building both motorcycle and racing engines. The one in the Si pulls well from 5,000 because of the VTEC variable valve timing. It really sings from 7,000 to 8,000, where the 160 horsepower is reached.

To me, the disadvantage an engine that revs this high is this: Most drivers aren’t comfortable revving an engine this far and probably won’t most of the time. As much as I like the way it screams up to 8,000, horsepower that is accessible at lower rpm would be used more often.

The five-speed manual transmission shifts with a flick of the wrist. Third, fourth and fifth gears have closer ratios than other Civics and that helps keep the engine in its powerband. Highway cruising is a tad noisier because the lower fifth gear spins the engine more.

All Civics use a dual wishbone suspension front and rear, but the Si gets stronger front springs and a brace between the front shock absorbers. Special gas shocks provide a firmer feel without degrading the ride quality.

In most driving, the Si’s tight ride feels good, and it reacts well to steering input. Really aggressive driving shows up the shortcomings of front-wheel-drive traction, but that is mostly academic in daily driving.

Like other Civics, the Si has electronic controls for its heating and ventilation system. Three knobs are placed vertically alongside the radio, where they can be reached without moving your hand far from the steeri ng wheel. While this layout is unusual, I found it to be most convenient.

Front seats are pretty heavily contoured, and their firm padding feels as good as the end of a drive as it does at the beginning. The upholstery pattern is lively enough to be interesting, yet subtle enough that it doesn’t look garish.

The back seat is fairly small, but the 60/40 split-folding back expands cargo capacity nicely.

Our test car’s build quality was first rate. Engine and road noise were both well muted.

While Honda touts the Civic Si as a hot car for the young generation, this package is one that will appeal to older drivers who like a responsive car without a towering price tag.

Price
The base price of the Civic coupe Si test car was $17,445. Floor mats and transportation brought the sticker price to $17,949.

Point: Because it sports a 160-horsepower engine, Honda touts its Civic Si as a hot r , but its sharp handling actually makes it more akin to a sport sedan.

Counterpoint: Aside from a small backseat, the only downside to the Si is that the engine has to be revved very high to extract its power.

LOVE Honda Quality- and the ZIP!

The Honda Civic LX 1999 is a wonderful and reliable car. I have had it for 19 years and it runs like it is brand new. Cannot think of a more reliable car than a Honda Civic.

Rating breakdown (out of 5):
1 person out of 1 found this review helpful. Did you?
Show full review
See all 54 consumer reviews 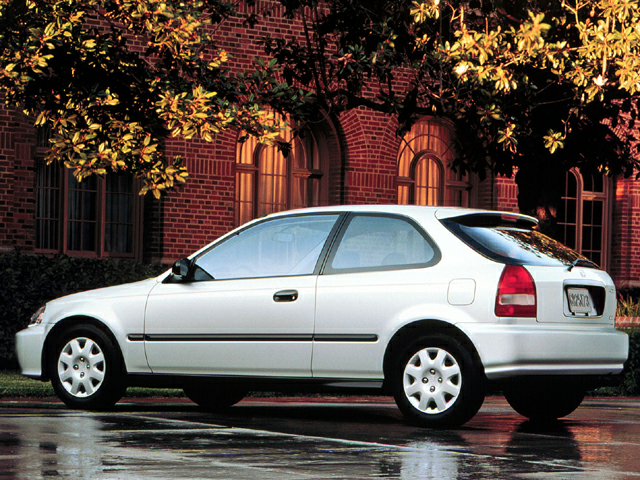 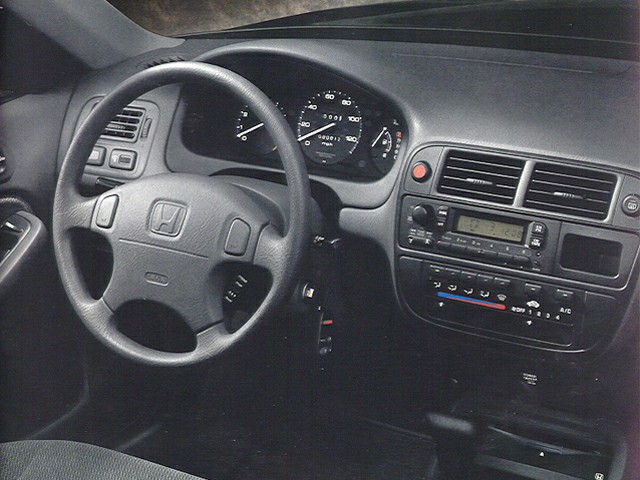