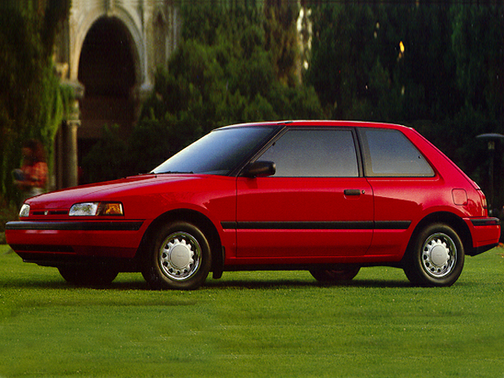 The Mazda 323 is a little car you don’t hear much about, what with Saturn’s lineup of hot-selling small cars, the new Honda Civic and Chevrolet’s redesigned Geo Prizm stealing most of the headlines. But Mazda’s 323 hatchback deserves a slot on the honor roll right next to those cars.

Like the Saturn, Civic and Prizm, the 323 is an inexpensive car. But it is not a cheap car. The 323 is solid, sturdy and worth its asking price.

A smooth and quiet 82-horsepower, 1.6-liter, four-cylinder engine with fuel injection makes the 323 a terrific performer.

There’s plenty of power for quick acceleration and, unlike many other entry-level small cars, the 323 can overtake slower traffic with ease.

The test car came with a five-speed manual transmission. If you don’t like shifting, you might want to order the 323 with the optional four-speed automatic, but the car probably wouldn’t be quite as zippy. It was the five-speed that really made the car fun to drive. You don’t expect an entry-level hatchback to deliver sporty performance, but the 323 did. And the engine even had a quiet, but sporty-sounding, growl when it was revved.

The clutch was smooth and light, making the transmission easy to shift. Unlike many other small cars, you don’t have to shift as often. The 323’s engine was strong, and because it delivers plenty of power without having to be revved up, you won’t have to downshift into the next gear to accelerate.

Fuel mileage averaged an excellent 31 in the city and 38 on the highway.

All it takes is one trip around the block before you realize the 323 is not your average small car.

For instance, there’s the four-wheel independent suspension. It was fairly soft, yet the car was agile and sporty and easily able to handle aggressive maneuvers. It cornered quickly while retained its poise.

There’s nothing special about the front disc/rear drum brakes except the fact that they are strong and capable of stopping the car quickly without locking up easily. The 323 doesn’t come with anti-lock brakes, but it still takes considerable effort to make the car skid.

One of the advantages of a small car is that it gives you the ability to squeeze in and out of small places. This is a strong point for the 323. The test car sported optional power rack and pinion steering; it could turn a circle in 31.5 feet. And parallel parking was a breeze.

There’s room for some minor improvements here. Though the car was assembled nicely, Mazda is a bit cheap in handing out what I think are essentials.

For instance, the test car did not have a right-side door mirror or a clock. And an intermittent windshield wiper would have been a nice touch. Those items, plus a tachometer, would make the 323 an outstanding buy. (According to Mazda, a digital clock and the mirror can be purchased as dealer-installed options, but intermittent w ipers and a tachometer are not available.)

That said, I found the car to be comfortable, even after a two-hour trip. The cloth-covered bucket seats, which can be tilted into a reclining position, offered good support, and the headrests were adjustable.

The ride was very quiet. I never felt as if the car was tinny or cheap. There was no wind noise, and even over rough pavement, road noise hardly intruded into the interior.

Along with the 323’s excellent performance, interior room is simply extraordinary for a car in its class. This is one of the few small cars where two average-sized adults can sit in the rear in relative comfort.

Another nice feature is its rear seats, which split and fold down, giving the car even more utility.

The hatchback area offers room for at least six bags of groceries. Items stored in the hatchback are shielded by a cover that lowers into place when the rear door is lowered.

The test car did not have an air bag. Instead, it ca me with motorized seat belts.

Truett’s tip: Add the Mazda 323 to the list of small cars that deliver solid value. Mazda’s entry-level car offers pleasing performance. It is versatile, well put together and fun to drive.

All model years for the Mazda 323 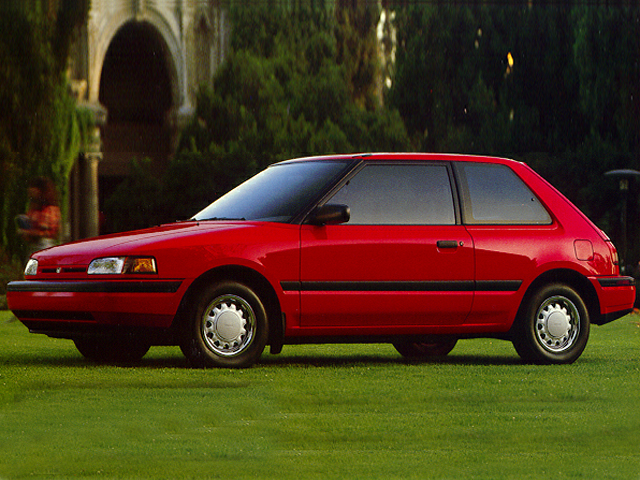