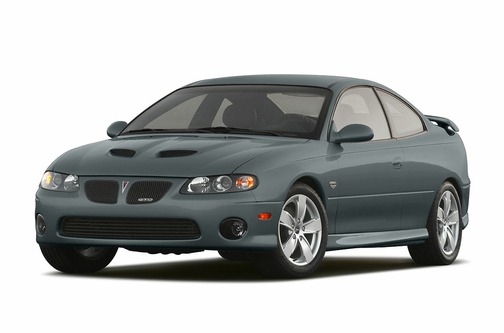 Our 2005 Pontiac GTO trim comparison will help you decide.

The Pontiac GTO’s V-8 engine has grown for 2005, its second year on the market, from 5.7 to 6.0 liters  following the Chevrolet Corvette, whose drivetrain it shares. In the current GTO’s short history, I have discovered the secret to appreciating it: Don’t think of it as a GTO. Seriously, if you have any fond memories of the muscle-car-era GTO, put them back in their shrine and leave them there, unsullied by this new car that dares to bear the vaunted name.

This GTO is an Americanized version of the Monaro, a model that General Motors’ Holden subsidiary sells in Australia. In his quest for “gotta-have” products, GM’s product czar, Bob Lutz, traveled Down Under and said just that: We gotta have that in the United States. Pontiac played with the styling a tad, slapped on the GTO name and there you have it. If it makes you feel better, think of the car, which is assembled in Australia, as the Pontiac Aussie. I took to calling it the Pontiac ‘Roo.

Like its namesake marsupial (work with me here), the ‘Roo puts its considerable power to the ground through muscular hindquarters. Rear-axle hop is negligible thanks to an independent rear suspension, but rough pavement causes the car to bound down the street on its firm suspension. Get heavy on the accelerator, and the ‘Roo will wag its tail. (OK, that’s enough of that.)

A 55/45 weight distribution, front/rear, gives the car an understeer tendency, which is definitely a safer condition than the alternative. The engine’s outrageous 400 horsepower and 400 pounds-feet of torque allow you to bring the rear end around rather predictably and safely in a turn, though a little too much throttle will put you sideways. My car had the optional six-speed-manual transmission, which lists for $695. An extra charge for a manual? Not really. Its superior fuel economy (17/25 mpg in city/highway driving) eliminates the $1,300 gas-guzzler tax levied against the standard four-speed automatic (16/21 mpg), so you pay $605 less.

Aside from pinning you in your seat and rocketing the GTO to 60 mph in less than 5 seconds, the engine and its low-rev torque make gear choices academic. Want to power out of that turn in 2nd? Great. 3rd? Sure. 4th? That’ll work, too. Unfortunately, the shifter is meatier than a ham hock and about as precise. I didn’t drive the automatic, but I suspect the fact that it has only four gears won’t matter much with this engine.

I took a spin around Road America’s 4-mile racetrack in the GTO (with the traction control disabled) and was a bit disappointed by how it handled a long sweeper turn: Where the car can power out of a corner with decent balance, the front weight bias is a bit too much to overcome with the throttle in a sustained curve at a sustained speed. I believe I scrubbed a good deal of rubber off the front tires.

My car had the standard all-season rubber, rated P245/45ZR17 (tire codes). Though impressive for all-season models, the BFGoodrich g-Force T/A tires tend to sing when pushed to their limits, and they can’t compete with the optional 18-inch, 40-series summer tires.

From the tires to the interior, what surprised me in this type of performance car was its daily usability  particularly its backseat. The two-position backseat is more than a mere pouch for the little ‘roos. At 6 feet tall, I had a little headroom to spare, and my knees weren’t raised very high and just barely touched the front backrest, set to my driving position.

It’s a drag to climb back there, though. The GTO is a big two-door, which makes for large doors  a problem in tight parking spaces. A lack of grab handles doesn’t help matters, but I’m able to forgive all these things because the front seats are designed to maximize backseat ingress without strain: Once you raise a lever and tilt the backrest forward, a button right below the lever moves the power seat forward. The same button motors the seat backward once the backrest is returned upright. Some coupes don’t even provide this feature  manual or powered  on one seat, let alone both.

Backseat passengers get head restraints that raise high enough, and prominent side bolsters for when Dad decides to go fishtailing. What they don’t get are cupholders or windows that open.

The GTO’s overall interior quality is fair. I was satisfied with the sport bucket seats and the ergonomics, save for the radio, which is clearly designed for a car with right-hand drive; its most important controls are on the right-hand side. The red-faced gauges are a nice touch, and I always appreciate a configurable LCD low on the instrument panel that can be set to display a digital speedometer. I don’t prefer digits, but I tend to set the steering wheel low where it blocks the speedometer dial.

For a car of this size, the trunk is very small at 7 cubic feet. Wondering what was eating up the space between the backseat and the trunk and precluding the inclusion of a folding backseat, I removed a cover and found the fuel tank.

The GTO doesn’t fit into any defined class. One could argue that the Nissan 350Z is a competitor. In V-8 performance, the car isn’t as precise or refined as a Chevy Corvette, but it’s not nearly as raw as a Dodge Viper. Its price is fair, but a Ford Mustang GT will give you nearly the quickness, many thrills and better styling for thousands less. It’s hard to imagine a race between a mustang and a kangaroo. It all depends on where you place your money.

As a daily driver this car has everything needed to get there while having fun. Power is exciting and handling excellent. I Love this car.

October 27, 2018
By Blue Beauty from New Jersey
Owns this car

Love the car, its a joy to drive. Love that it tells you that you have driven two hours and you should stop and rest.

So glad I purchased a GTO when they were available

May 15, 2018
By DaytonaRick from Daytona Beach, FL
Owns this car

Back in 2005 I never thought I would purchase a $35,000 car, but the Pontiac GTO had everything I was looking for in a sporty car: Excellent styling, rear wheel drive, large powerful V8 engine, solid transmission, and a stiff suspension. I am SO glad I bought it when I did, rather than waiting for the "new" Camaro to debut. The Camaro was a HUGE disappointment, with its high belt-line (meaning much smaller windows that are too high to comfortably rest your arm on the window sill while driving!), poor visibility, and cheap interior plastics. In contrast, the GTO has large windows, very nice soft plastics in the interior and very nice suede fabric on the door panels. The seats provide excellent support. While the GTO is low to the ground (it IS a sport car, after all), it is not difficult to get into and out of as many sporty cars are. And you do not feel like you are sitting in a "bucket" that you need to climb out of, as is the case with most unibody constructed cars. The LS2 6.0L V8 engine is awesome, with plenty of power in reserve at all times. Yes, premium fuel is recommended, but at least the engine has no gimmicks like a turbo that needs to be cooled down after you stop, before you turn the engine off! The automatic transmission is also a very strong 4-speed (including overdrive) model, rather than those newer 6-, 7-, and 8-speed automatics that cannot decide what gear to be in when you are trying to accelerate quickly or climb the mountains! The steering and suspension are very tight, with no play whatsoever. Problems? The throttle-body unit had to be replaced, and would have been under warranty if I had driven it more in the first 3 years (warranty period). The radiator sprung a leak after 120,000 miles, and a small plastic heater valve developed a crack at 146,000 miles, causing all coolant to drain out; then the replacement part also cracked within 3 weeks! But that has been it. One interior mistake was the standard power seats. When you are in a hurry to get into or out of the back seat, you need to press a button and hold it to move the seat forward to give enough space to climb in and out of the back. This mechanism has broken on BOTH of my front seats; the passenger seat now cannot move at all; it cannot even recline. I have not had it fixed because the estimate for parts and labor was close to $1100! Speaking of the back seat, you would be hard-pressed to find a two-door car with as roomy a back seat as this one. Back seat passengers have a tremendous amount of room. Because of the different rear-impact standards in the USA from Australia (where the GTO was made), the gasoline tank had to be relocated for the US market to behind the back seat. The result is that the trunk is quite small. I have not had a problem with it, but that's because I travel alone. My GTO has 147,000 miles now and is still on the original set of brakes! I am upset that this vehicle is nearing the end of its reliable life (how much longer can the water pump, fuel pump, hoses, etc last before I get stranded?) because there is really nothing else to replace it at a reasonable price. The Camaro design is poor (a shame because I usually love the feel and characteristics of GM cars), and I don't trust Ford (Mustang) or Chrysler (Dodge Challenger) reliability; I have heard of too many problems with them (Challenger = 8-speed automatic transmission.... ridiculous!). And I don't want to buy any technology that is older than this GTO. I don't mind continuing to pay for repairs, since I still love this car, but I just don't want to get stranded in some remote unfamiliar area, away from repair shops I trust. I wonder about parts availability in the future too, since it is a Pontiac, and there were so few GTO's built during its 3-year run (I believe it was limited to 18,000 per year?).

Rating breakdown (out of 5):
5 people out of 5 found this review helpful. Did you?
Show full review
See all 36 consumer reviews 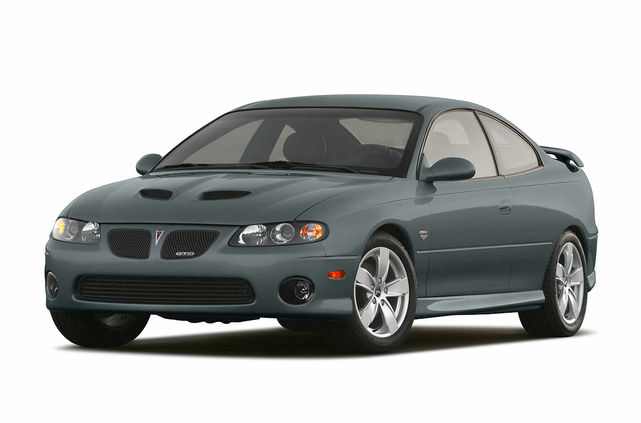 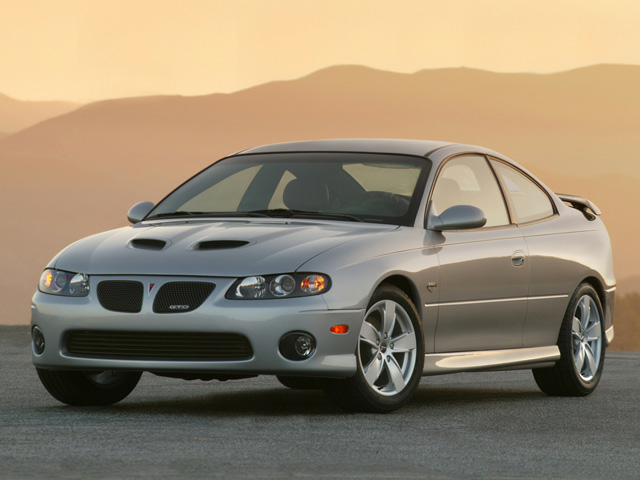 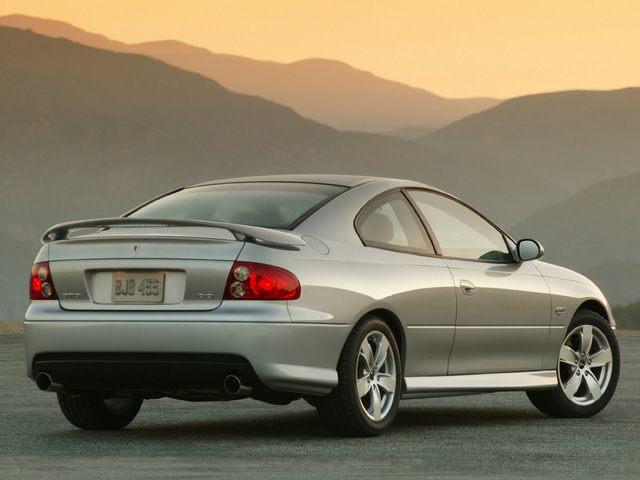 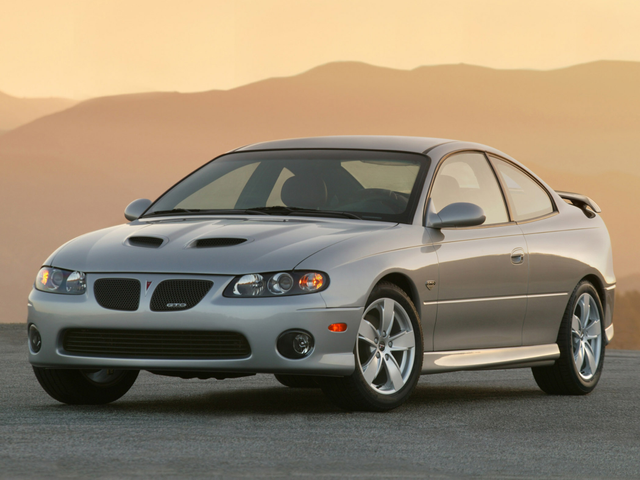