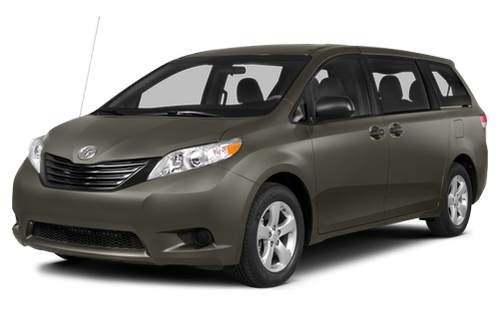 Change year or vehicle
$9,507 — $24,331 USED
18
Photos
View Local Inventory
No listings at this time Get the latest resale value

The 2014 Toyota Sienna is a seven- or eight-seat minivan that competes with the Honda Odyssey, Nissan Quest and Chrysler's twins, the Town & Country and Dodge Grand Caravan.

Trim levels include the L, LE, XLE, SE and Limited. Front-wheel drive is standard, but the Sienna is unique among minivans in offering optional all-wheel drive.

There are no significant changes to the 2014 Toyota Sienna.

How Does the 2014 Toyota Sienna Compare to Other Minivans?

The Sienna's first row is open and inviting, but the dashboard is all hard plastic. The higher the trim level, the better quality the materials, as the Limited replaces the plastic with rich-looking imitation wood. The maximum cargo space provided by the Sienna (150 cubic feet) beats out the Chrysler Town & Country (143.8) and the Honda Odyssey (148.5).

Where the Sienna stands out for the wrong reason is cargo versatility. Though there's plenty of room, accessing the third row and folding the second row flat are both a workout. The seating is heavy and doesn't come equipped with a power-folding feature until the Limited trim.

The Sienna is the only minivan with available all-wheel drive. While the most fuel-efficient minivan in the class is the Odyssey, with an EPA rating of 19/28 mpg city/highway, the two-wheel-drive Sienna is rated 18/25 mpg. The Sienna's drivetrain is also smoother but not the quietest of the competition. Wind and road noise aren't what make it loud; it's the excessive engine noise.

What Features in the 2014 Toyota Sienna Are Most Important?

Standard safety features include antilock brakes, active front head restraints, side-impact airbags for the front seats, side curtain airbags for all three rows and an electronic stability system with traction control. Significant available safety features include a backup camera, front and rear parking sensors, a blind spot warning system and a Pre-Collision System that alerts the driver and tightens the seat belt if a possible collision is detected.

The 2014 Toyota Sienna is a good choice for shoppers who value versatility in the second row and a comfortable, spacious ride. The Sienna's cheap-looking materials, mushy brakes and indecisive transmission might turn you off, though.

I've had a sienna in the past and they are amazing vehicles. The maintenance costs are low and the vehicle goes on for several 100,000 miles if you take care of it. The current one is more updated ... Read full review

meets all my needs, this is a pretty basic model with not a lot of extra bells and whistles, I like the ease of seat removal Read full review

The 2014 Toyota Sienna currently has 6 recalls

All Model Years for the Toyota Sienna

Certified child passenger safety technicians conduct hands-on tests of a car’s Latch system and check the vehicle’s ability to accommodate different types of car seats. The Sienna received the following grades on a scale of A-F.*

B
* This score may not apply to all trims, especially for vehicles with multiple body styles that affect the space and design of the seating.