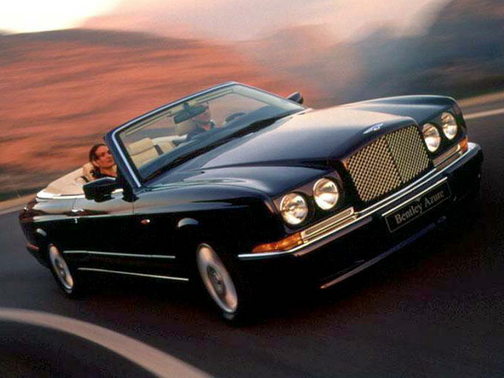 Our 2002 Bentley Azure trim comparison will help you decide.

I have tested some very nice, very expensive new cars over the past 20 years, but never have I experienced the utter public contempt I felt while driving a 2002 Bentley Azure.

Not that it mattered: Close the vault-like door on the Azure and the people of the world are immediately divided into two groups: You, and the Great Unwashed. In the Bentley, you are sitting on the “Finest Connolly Leather”; your feet are pressed against “Wilton Wool Carpeting & Lambswool Rugs”; your arm is resting on “Hand Selected Burr Walnut Veneer Trim.”

Meanwhile, outside, people sneer. Sure, they sneer at a Ferrari 360 Modena, at a new Porsche 911 Turbo, at the BMW 745i, at the Mercedes S600. But the Azure is such a conspicuous display of consumption, of complete disregard for the rest of the human race, that it can’t help but get to you.

After that, pass the Grey Poupon.

Should you deign to answer their plebian little questions, you will find that most are, “How much?” Then, “Is it worth it?”

Answer two: My goodness, no.

What new car is worth $365,673? There are faster cars, cars that ride better, cars with better stereos, cars that are arguably prettier, all for a lot less. With the Bentley Azure, you are buying the total package: You are spending money with such a disregard for value that logic can’t apply.

Then you start thinking about what you could buy with that much money. Thirty air-conditioned, four-door Toyota Echoes, maybe, one for every day of the month. Even if you paid list price for the Echoes, which is $11,965, you’d still have about $6,700 left over for gasoline. Or a chauffeur.

Unfortunately, though, the Echo not only doesn’t have Wilton wool carpets, the carpet is, my research suggests, not even wool at all. Sniff!

The base price of the Azure, which is a convertible, is $349,990. Options included a pair of Bentley umbrellas ($222), a walnut gear shift lever ($607) and drilled alloy accelerator and brake pedals ($519). The reason for alloy pedals is to save weight – usually about two pounds – but since the Azure tips the scales at 5,754 pounds, or about 500 pounds more than a Chevrolet Suburban, what’s the point?

Fortunately, there’s a big 6.8-liter, turbocharged V-8 engine that pumps out 400 horsepower. It’s thirsty, getting about 13 mpg overall. It’s why part of that total list price is $4,500 for a federal “gas guzzler” tax.

For such a massive car, the Azure handles nicely, but when you ask it to corner sharply, there is no way to mask the fact that you are requesting, however politely, that nearly three tons immediately change direction. If you want sportiness, the Bentley Arnage is your car, and it’s a bargain at just $235,000 or so, which is fewer than 20 Toyota Echoes.

Bentley, which is owned by Volkswagen, is currently being split from its sibling, Rolls-Royce, as BMW takes over Rolls. VW is committing a lot of resources to updating Bentley and its image as it moves out of Rolls-Royce’s shadow. Likely there will always be a Bentley, but someday they may no longer be built, by hand, at the ancient plant in Crewe, England, by people who really care.

That’s what you are buying with a Bentley Azure – craftsmanship, and pride and spare-no-expense quality.

And I appreciate that. I also appreciate the huge trunk; we stopped by one of the K-mart stores that is going out of business, and I bought a new air compressor for $88, and It fit right in the back. A man in a pickup truck just stared.

“Hey,” I said. “How do you think I can afford this Bentley? Smart shopping!”

He smiled. Or it might have been a sneer.

Beautiful and Luxurious ! Fun to Drive.

I find this fine example a true state of the art as the hand-built craftsmanship is unsurpassed by none. Timeless styling and a dream to drive. I can compare this fine automobile to many vehicles that I've owned for over 60 years of very experienced motoring. I've driven SCCA sanctioned road-race events for four decades. Have flown F-16's. This Bentley is definitely one of the best drives ever experienced. For those whom in fact can't place their heads around this fine automobile, may I suggest you purchase something in the nature of a mass produced brand. However for the minority looking for a great vehicle that steps above of all the rest....Buy a Bentley ! Quote..."If you can't afford to maintain this vehicle, definitely by a mass produced something or other. I own 3 foreign manufactured Vehicles and 5 that are made in the USA.

All model years for the Bentley Azure 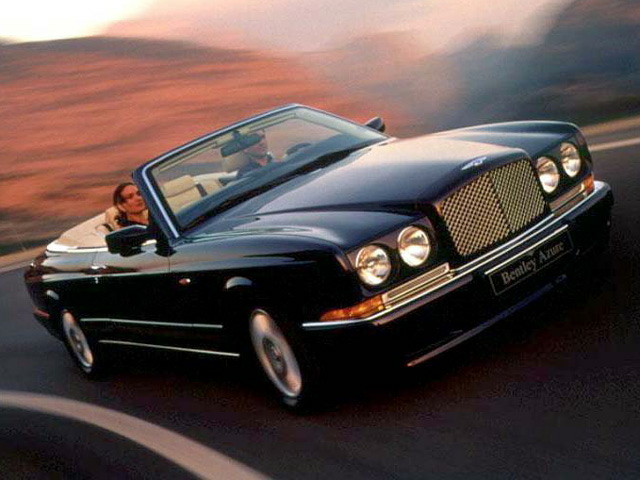