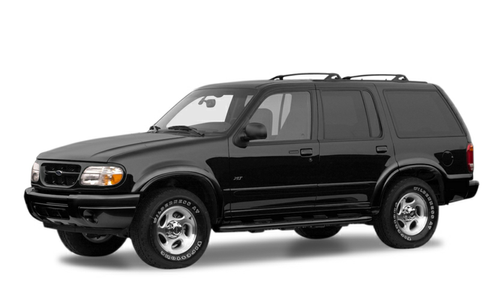 Our 2001 Ford Explorer trim comparison will help you decide.

The Explorer has been around for 10 years now, a veritable geologic age, even in sport-utility terms. Hence, a new one is well along in the development process. But in the meantime, Ford is using a variety of tried-and-true tricks to maintain momentum. Sales for this most popular SUV have been running in the 400,000/yr. range. Such things are not commented on officially, but one hears there may be as much as $10,000 profit, on average, in every one that Louisville and St. Louis turn out. Even if it’s only half that, the math still works out to billions, serious money anywhere but in D.C.

Recently we reviewed the Explorer Sport Trac, a clever four-door SUV-pickup hybrid Ford spun off the Explorer platform. That took considerable engineering and tooling investment, and probably will have limited, but intense, appeal. The cheapest and most venerable longevity technique is the face lift, which, while still representing a sizable outlay, is the most expedient way to “freshen” a veteran contender for a wider audience. The result, as with this week’s subject, is often interesting enough to persuade large numbers of folks not to wait. The two-door “Sport” version of the Explorer got a cosmetic makeover and then some. Even in the auto biz, you sell the sizzle, then the steak.

The one rap against the Explorer from the beginning has been its rather bland appearance, although there may have been some method to the madness . . . the expensive Eddie Bauer version is rather pretty, and oozes profit. They’ve done a great job with the Sport, a series itself worth more than 100,000 units a year – for a dominant 75 percent market share – by reworking every exterior panel except the liftgate. Side and wheel-lip moldings, along with a variety of bulges, hint of a muscularity like a body-builder in a shirt a tad too small.

Happily, though, the less obvious changes are even more appealing. The single-overhead-cam version of the V-6 engine is now standard. It delivers 205 hp, a 28 percent improvement over the same-sized (4 liters) overhead-valve powerplant formerly supplied. Torque is up 6.6 percent (to 240 foot-pounds), not such a dramatic boost, but nonetheless welcome. Front legroom has been increased by an inch, and a CD player and center console are now standard. Standard transmission is a five-speed automatic. Ford claims ride and handling have been improved, in part by a change to dual-stage rear springs, and the interior noise level is said to be lower. Those brags, I found, are true.

This is the same engine as was used in the Sport Trac tested here recently. Somehow – sample variation, perhaps – it seemed much more suited to the task at hand in this instance. It felt more robust, breathed better and was more willing to run out to its redline, like a good little overhead-cammer.

Of course the Sport is much less massive than the Trac or any four-door Explorer variant. A typical four-door weighs 3,875 pounds, the Sport Trac 4,400 . The stubbier Tudor, as they used to call such duoports, weighs only 3,650. Thus, 0-60 times drop well down into the 9s, quite respectable for the breed.

EPA estimates are 15 mpg city, 19 highway (aerodynamics, my dear Watson). I logged 16.9 on regular unleaded in not particularly stressful country driving. For now, only a 5-speed automatic is fitted, although Ford says a 5-speed manual will be available in the fall. The only reason I can think of for anyone to want such is price. The automatic is a jewel, shifting swiftly and nearly imperceptibly. With five ratios available, the designers were able to put 1 through 4 close enough to one another to keep the engine humming, and to allow fifth to be a fairly long-striding (0.75:1) overdrive.

A 2-door is 10 inches shorter overall than a 4-door, and that comes directly from the wheelbase. At 101.7 inches, the Sport’s is on a par with a compact car’s. On theoretical grounds, one would expect that to lead to better maneuverabil a considerably choppier ride. Well, yes and no. The new two-stage springs Ford touts have done wonders for the ride, allowing the suspension to travel easily at first and then firm up as it reaches the end of its motion, effectively banishing any tendency toward pitching, and doing a good job in general of keeping life’s unpleasantries at bay. Revalved shocks make a contribution, too, as do new urethane body mounts, which cut low-frequency noise by half, compared with the old rubber style.

The tidier size is certainly more conducive to off-road jaunts, and makes a bit of difference in the day-to-day, too. The turning circle is down 2.6 feet to 34.7, which puts it in the range of many small cars. While it’s still a body-on-frame design, the Sport nonetheless felt agreeably tight and was rattle-free. Noise isolation is much improved. At cruising speeds, overall ambient noise level was only moderate.

The Sport, like the Sport Trac, uses the black-on-white, overlapping style for gauges to set it apart from more staid Explorers. I find it unappealing by day, and repeat the criticism that the accessory gauges should be better differentiated. Controls for radio, air and ancillary functions are decent-sized and well placed. The first cabin was very pleasant, tricked out as it was with the expensive leather option and power driver’s seat. Second class, sensibly rated for just two passengers, would do fairly well for those who are young enough not to appreciate the advantages of a four-door design. Cargo capacity with the rear seats in place is 35.6 cubic feet, about twice a big car’s trunk. With the seats flat, that doubles.

The Sport has disc brakes, antilock assisted, front and rear. Pedal feel was a bit soft, but stopping distances were within the comfort zone.

The “audiophile” stereo in the tester was very pleasing in general tonality and radio sensitivity. I’d suggest trying the standard unit, however, before plunking down 5 centuries on the step-up.

Base price on a 4×4 Sport is $24,695. That includes alloy wheels, air conditioning, automatic, power mirrors, privacy glass, power window and door locks, an AM-FM-CD stereo, four-wheel disc brakes with antilock, trailer wiring, and second-generation front air bags. The press relations folk had fun with options on the one they sent me. A 4.10 rear axle (better blastoffs and towing, poorer economy) costs a stiff $355; a power moonroof, $700; the “audiophile” stereo upgrade (a Pioneer unit with seven speakers, 290 watts and a six-disc in-dash CD changer replaces the four-speaker, 1 disc, 60-watt unit), $510; the “leather comfort group,” which includes the obvious plus a power driver’s seat, $1,495; “convenience group” (puddle lamps, auto locking, and remote keyless entry with keypad), $750, and the “premium sport group” (upsized tires and wheels, front tow hooks and fog lamps), $700. Total, with freight, was $29,855.

Not disputing the value Ford has built into this piec e, but that might be a bit stiff for the intended youthful audience.

February 15, 2020
By C.Chandler from Frederick, MD
Used to own this car

The 2001 Ford Explorer. If you opted for the 5.0 engine in this SUV then you know two things. It was relativity reliable at a great cost. To put it mildly this thing made a loaded Peterbilt look anemic. Other than that it was typical late 90's early 2000's Ford quality. Cheap plastic covered the interior of the car and parts were constantly breaking off and rolling around in the trunk. It easily overheated in the dog days of summer and never warmed up fast enough in the winter to get the heat on before you got to where you were going.

I've driven this for 20yrs

This SUV has been going strong for 20yrs. It's been a total work horse. Great in the snow and rain. I had minimal problems with it. It's safe, heavy & strong. I have my wife take it to work in bad weather. I have total faith in it keeping her safe. This is build so strong & heavy I have no doubt in her walking away from any accident. It's been strong for 20yrs I bet it still has another 5 left easy.

November 10, 2019
By Calif Car from California
Owns this car

Most reliable vehicle I have owned. Bought used in 2002 and still use it daily with 185k miles. Changed the coolant and transmission fluids a few times and oil/filter every 3000 miles because that’s what my dad did. Passes California smog, no oil leaks or burning, keeps wheel alignment, no major repairs. Not as smooth a ride like a new one but maybe new shocks are needed. 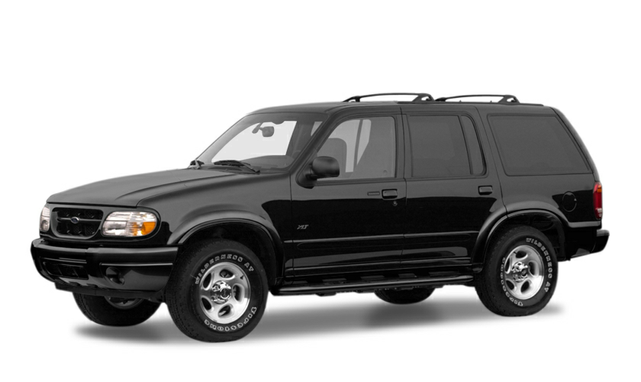 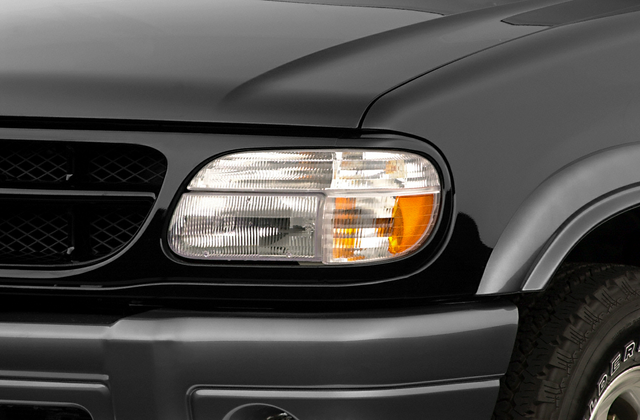 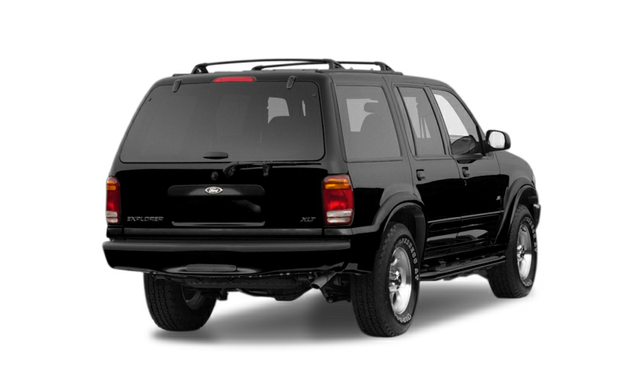 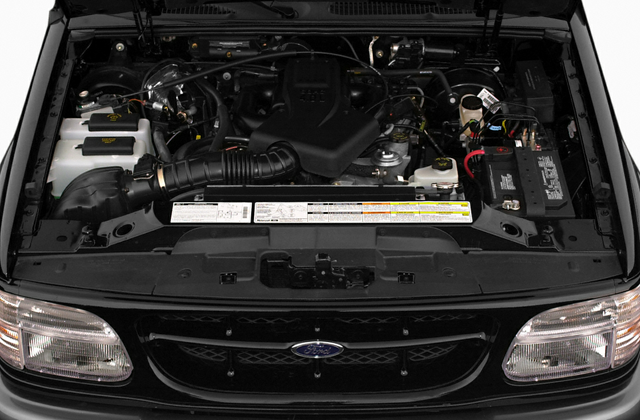 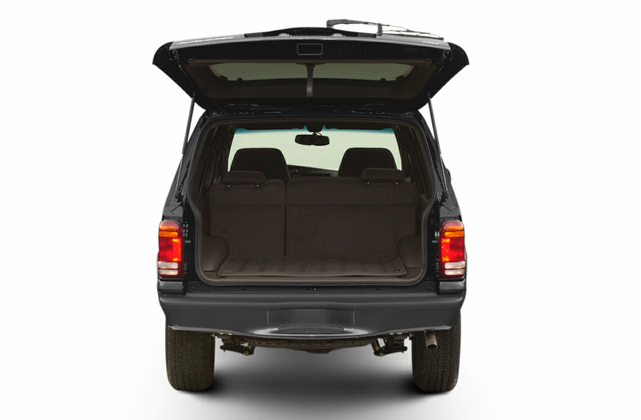 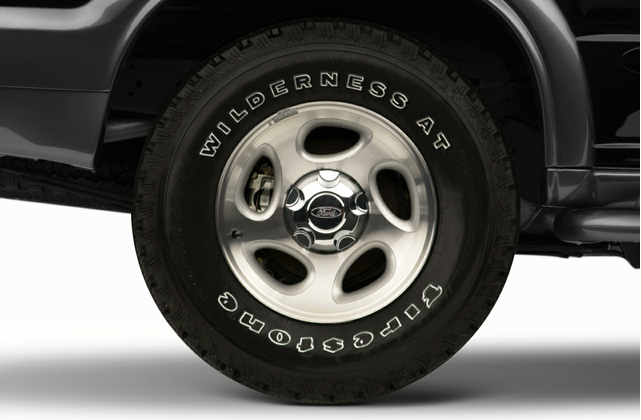 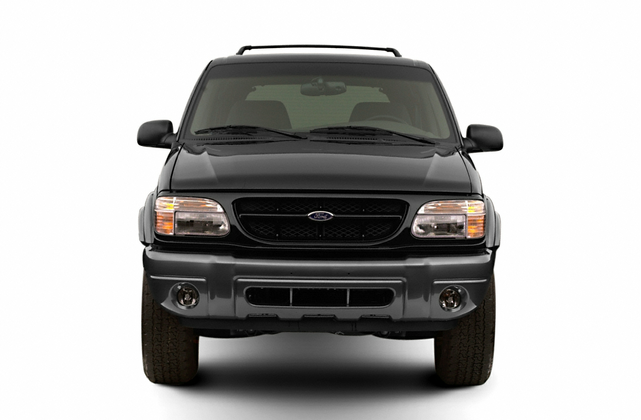 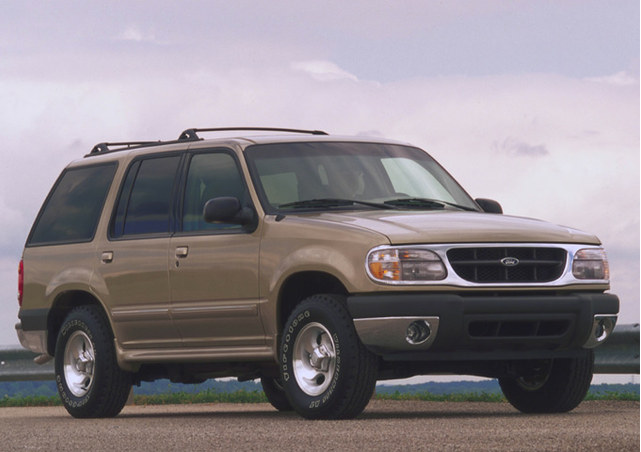 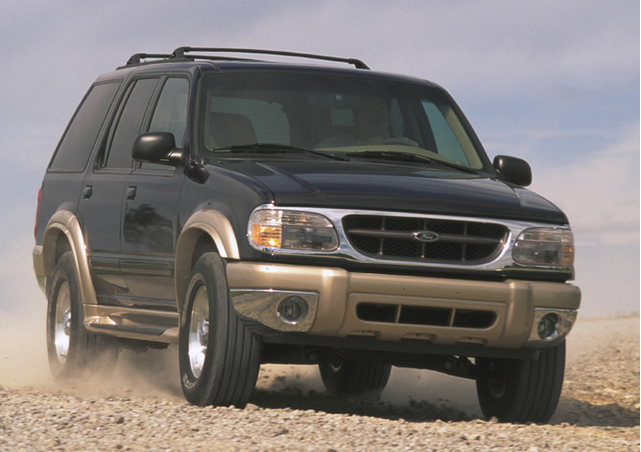 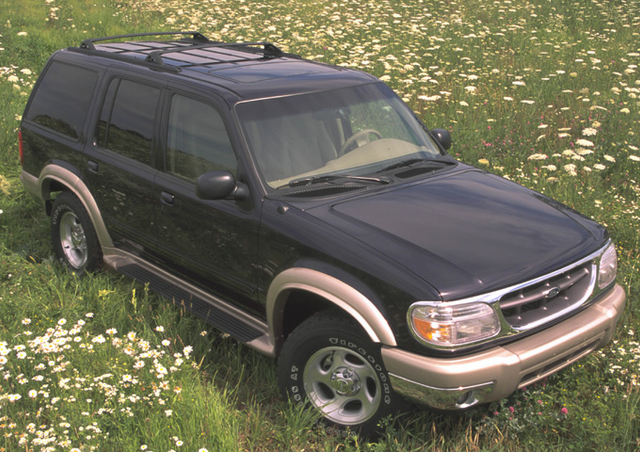 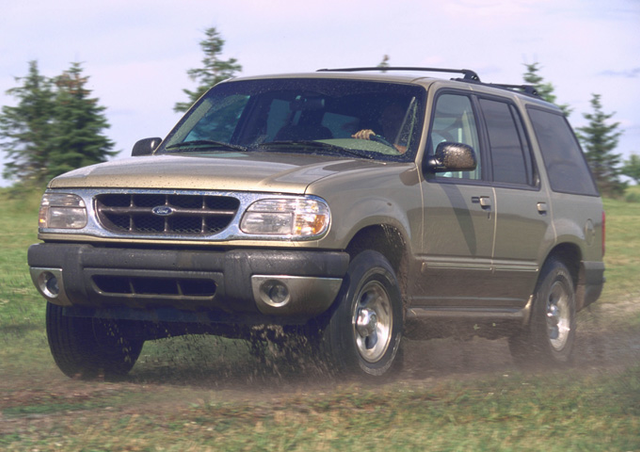 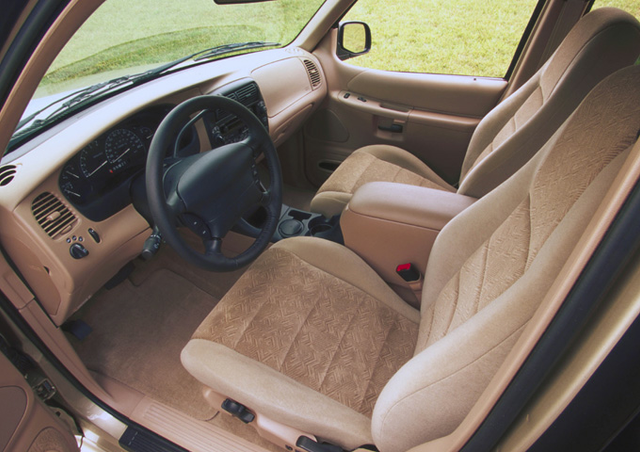 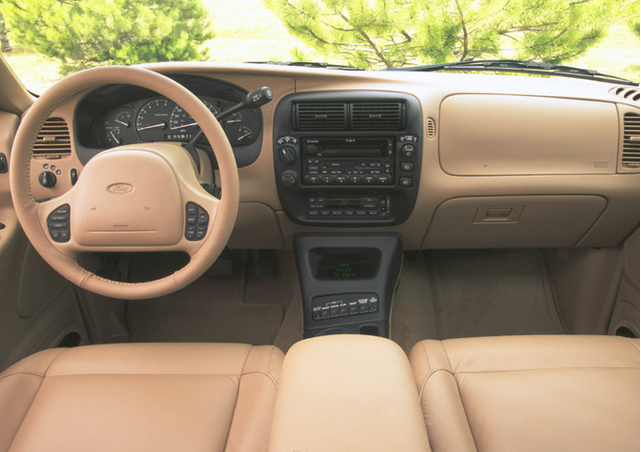 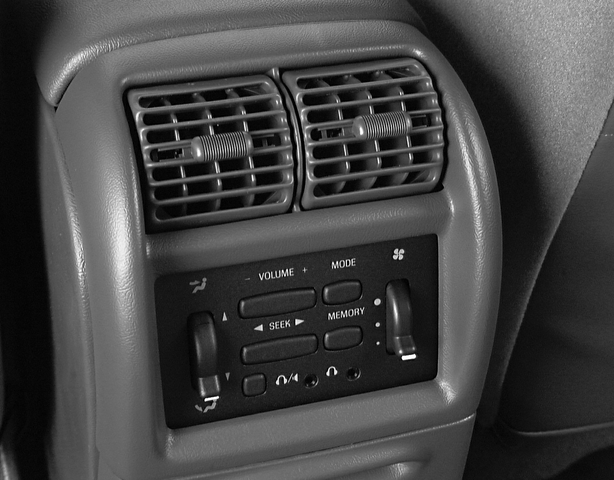 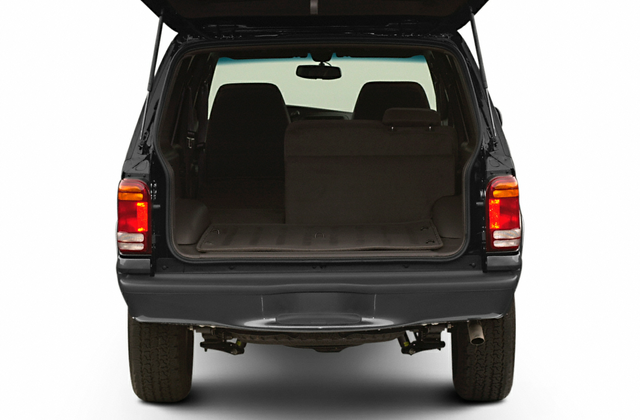 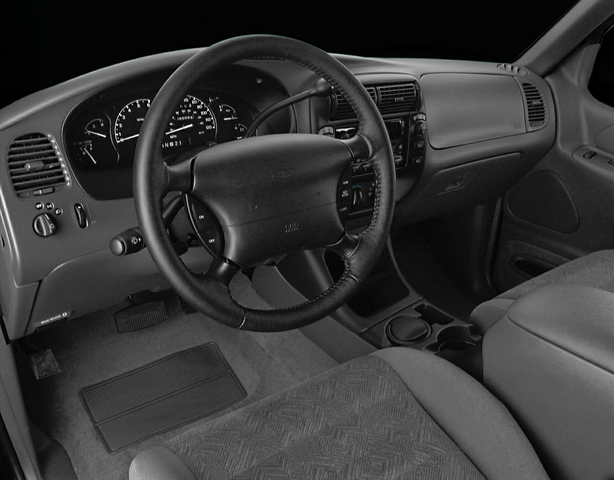 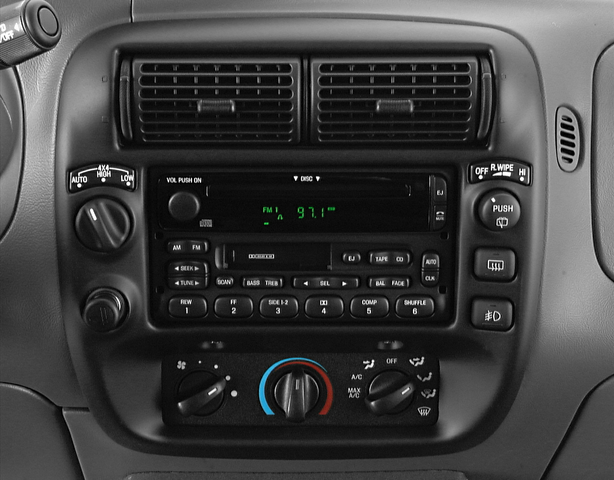 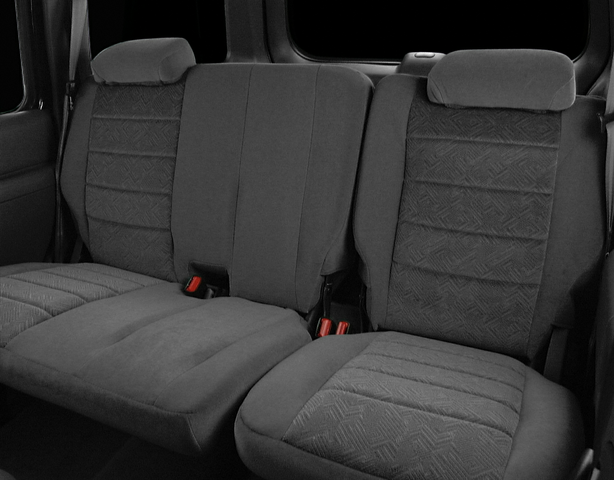 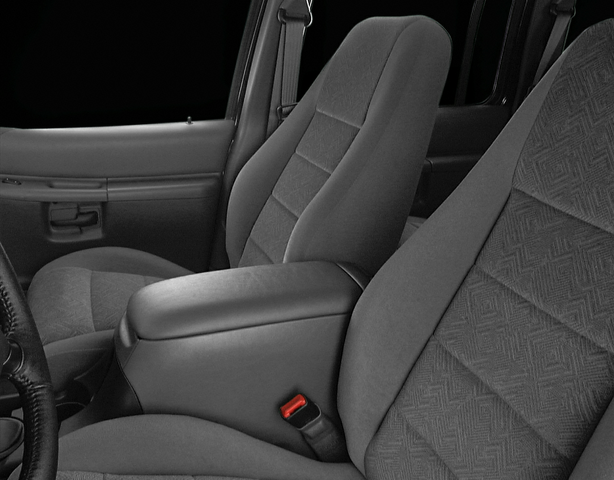 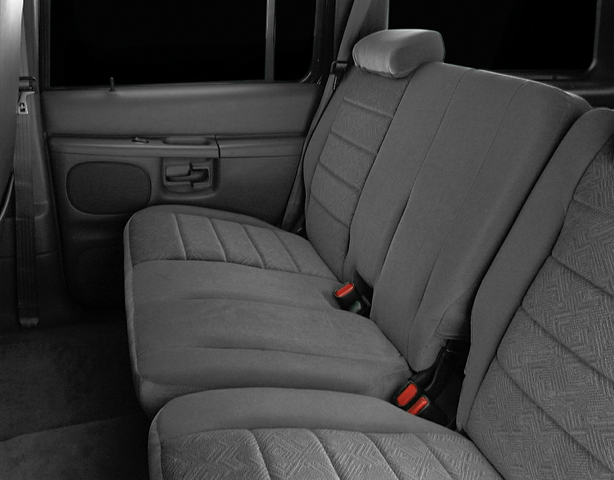