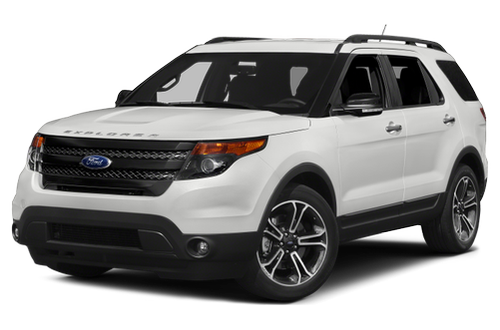 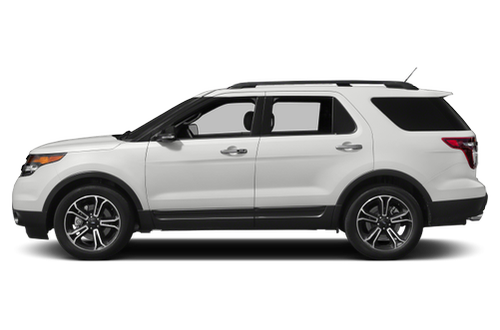 The 2015 Ford Explorer is a three-row SUV that seats up to seven and competes with the Toyota Highlander, Chevrolet Traverse and Honda Pilot. It's offered in Base, XLT, Limited and Sport trim levels. Front-wheel drive is standard, and all-wheel drive is available.

The 2015 Ford Explorer now comes standard with 18-inch aluminum wheels in the Base trim, and the Explorer Sport has a Class III trailer hitch. An Appearance Package is now offered with the XLT trim that adds a dark gray grille and mirror caps, body-colored door handles, an Explorer hood badge, black cladding and 20-inch machined-aluminum wheels. Inside the vehicle are heated front seats, leather-trimmed upholstery with suede inserts, an auto-dimming rearview mirror, unique floor mats and the MyFord Touch multimedia system.

How Does the 2015 Ford Explorer Compare to Other Three-row SUVs?

The 2015 Explorer has more room in the third row than the Dodge Journey or Land Rover, as well as more overall passenger room than the Chevrolet Traverse and Nissan Pathfinder. While maximum cargo space is higher in the Chevrolet Traverse, the Explorer's power-folding third row folds flat into the floor, and the Traverse also offers similar performance and technology features. The Dodge Durango can be equipped with a powerful Hemi V-8 engine, and its V-6 and eight-speed automatic transmission provide better fuel economy than the Explorer. The Nissan Pathfinder also offers stronger fuel economy as well as better handling.

What Features in the 2015 Ford Explorer Are Most Important?

The 2015 Ford Explorer comes standard with a 290-horsepower, 3.5-liter V-6 engine and front-wheel drive. A 240-hp, turbocharged 2.0-liter four-cylinder is available; the Sport model comes with a 365-hp, 3.5-liter V-6. All trim levels come with a six-speed automatic transmission. All-wheel drive can be added with the V-6 engine and includes Ford's Terrain Management System that adjusts the drivetrain to handle snow, mud, sand or pavement. The standard V-6 can tow up to 5,000 pounds, while the four-cylinder offers 2,000 pounds of towing capacity.

Drivers who value plenty of cargo room behind the third row, extra headroom and strong National Highway Traffic Safety Administration safety scores will appreciate the Ford Explorer. In addition, the four-cylinder engine offers competitive fuel economy, while the Explorer Sport is a good option for performance-focused SUV buyers. However, the available MyFord Touch system could be easier to use, and the thick A-pillars reduce forward visibility. A cramped second row may be a challenge for taller passengers, and the third row is difficult to access.

So far the car is a smooth rider.. It’s silent and looks nice.. Fully loaded & I cannot wait until I drive to my hometown to see how good it is on the road and on gas. Read full review

The 2015 Ford Explorer currently has 4 recalls

All Model Years for the Ford Explorer

Certified child passenger safety technicians conduct hands-on tests of a car’s Latch system and check the vehicle’s ability to accommodate different types of car seats. The Explorer received the following grades on a scale of A-F.*
* This score may not apply to all trims, especially for vehicles with multiple body styles that affect the space and design of the seating.