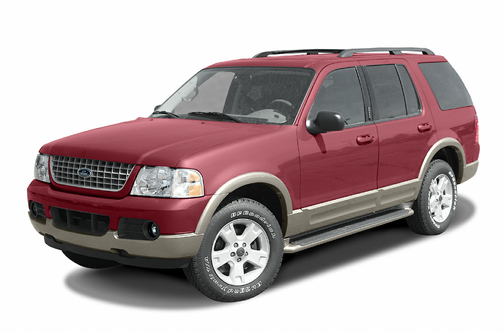 Our 2003 Ford Explorer trim comparison will help you decide.

It’s a rather daunting task to review the Ford Explorer – it’s not just that it’s the world’s best-selling sport-utility vehicle, but that there are so darn many to choose from. On the Edmunds.com site I counted 34 variants of the 4-door SUV, to say nothing of the 2-door and pickup permutations that fill out the list. (And then, of course, there are the variants offered with a Mountaineer label at Lincoln-Mercury stores.)

The Explorer is the one that really fueled the SUV craze. I can recall that when it first went on sale in 1990, some people thought Ford was crazy spending a fortune to design it and outfit the plant in Louisville.

But it clicked, and the biggest problem Ford had was meeting demand. A plant in St. Louis now shoulders some of the load.

The Explorer was essentially reinvented for the 2002 model year. Most importantly, the wheelbase was lengthened and the track, or distance between the wheels that share an axle, was increased, too. Both of these should lead to increased stability, important in the wake of the Firestone debacle, though they’d be an impediment to serious rock bashing.

The 2003 changes accordingly are few and mostly cosmetic. The Eddie Bauer series returns for those who want one so pretty they’ll never take it into the woods, and there’s a new series called the NBX, the macho street brawler of the family.

Let’s all groan together: NBX is supposed to represent “No Boundaries Experience”. Get those guys some reality pills. Its heart, Ford says, is the Yakima LoadWarrior cargo basket, a useful contraption for carrying wet and filthy stuff atop the vehicle instead of inside. It also has two-tone black front and rear bumpers and black side moldings, wheel lips and step bars. The only performance enhancement is the substitution of 17-inch BFGoodrich’s tough-looking Rugged Trail tires for the Michelin or Goodyear all-seasons which are wrapped around 16-inch wheels on the other series.

Explorers can be 2-wheel-drive or 4-wheel-drive, with either a V-6 or the optional V-8 engine. All come with a 5-speed automatic transmission. (I note here that the 2-door and pickup versions still use the old Ranger pickup platform.)

The one furnished for examination was a Limited, the most expensive of the many choices. Its base price with all-wheel drive and V-8 engine is $34,085. The cheapest of the new Explorers is the XLS series, which starts at $24,977, with 6-cylinder engine and 2-wheel drive. The Limited is of course a lot fancier inside than its cheaper colleagues, but even with leather and fake gray wood trim, it’s hardly opulent.

The Explorer can be equipped with what’s whimsically called third-row seating. For an extra $670 you get a perch even a kid might laugh at. To access it, you must tumble a second-row-seat (thankfully they’re divided 40-20-40) flat and then over. I didn’t find that fun the first time I tried it and doubt that it would be more fun in the long run. If you don ‘t absolutely, positively NEED the extra mini-seats, you’ll have instead 46 cubic feet of cargo room aft. Stowing all of the second-row seats opens up a total of 88 cubic feet.

As long as we’re discussing stats, you might want to know that the weakest member of the family (6-cylinder with the standard Class II towing package) can tow 3,280 pounds. With a Class III/IV setup and a V-8, you can have as much as 7,160 pounds shadowing you down the highway.

Engine choice is a no-brainer if you mean to drag anything serious or even haul five adults on a regular basis. But if like most folks you use your Explorer for commuting with just one or two aboard, the V-6 should do fine.

With merely a somewhat outsized driver, the V-8 easily broke the tires’ contact with the pavement in 0-60 burnouts even with 4WD activated. For light-duty service, you’d be better saving the 800 bucks and perhaps enjoying slightly better fuel economy. The EPA ratings on a 4×4 Explorer with the V-8 are 14 mpg city, 17 highway.

For once, driving fairly sensibly on hilly Indiana back roads – with a detour to the gravel pit – I somehow managed to beat the EPA and eke 19.3 miles from each gallon. Moderate speeds and a rather high overdrive fifth gear no doubt helped. In top, you get about 30 mph for every 1,000 revs on the tachometer.

Ford hedges a bit on fuel requirements, saying it needs “at least” 87 octane. For towing, I’d go with 91.

The V-8 is impressively smooth at idle – the equal of many luxury cars. It runs out to its redline with the brio one expects from a multi-valve, overhead cam powerplant, but in so doing it reveals the need for a lot more firewall insulation. The intake and mechanical noises become quite raucous under heavy demands. Otherwise, the cabin is moderately quiet.

Perhaps because it came with the heavy-duty towing package, ride quality of the Explorer was only fair. It let annoying amounts of road shock reach the driver, and I’m talking mere expansion joints and the like. This is not the sort of thing that a full load would help, either.

Handling was fairly good, although I thought the power steering was way too quick and a bit light for an SUV.

The standard tires are 235/70/16s. Pity they don’t offer 17 or even 18-inch wheels on this 4,500-pound transporter. Despite its all-wheel-drive mechanism, the tester felt somewhat squirrelly and the tires squealed early and often when we tried some slaloms.

The transfer-case manipulation is via three buttons mounted to the right of the radio stack. All-wheel-drive is the default, with 4×4 High and 4×4 Low available with the push of a button.

The brakes were gratifyingly competent. Discs front and rear, they produced surprisingly good stopping distances and the pedal feel was lovely – easily modulated though firm. Antilock is standard, and it was quiet and effective. If for some reason you’re worried about rollovers, Ford offers what it styles a “safety canopy” as an option. This is what others refer to as side-curtain air bags which extend to the second row. Ford has armed them with a sensor-computer monitor that, in addition to responding to side impacts, also predicts when the rate of roll exceeds the vehicle’s limits and inflates the bags in anticipation of the crash. That bit of peace of mind costs $495. Ford also offers, for $795, its AdvanceTrac stability system, which, like those on luxury cars, can apply braking to one wheel if it’s getting ahead of its partner. This happens when the driver orders more turning force than can be delivered. Seems to me it’d be pretty silly to drive any SUV that hard.

The National Highway Tra ffic Safety Administration awarded the Explorer its top, 5-star rating for driver protection in a 30-mph frontal impact. The passenger protection was rated four stars. The side-impact scores, NHTSA says, are still under review. The Insurance Institute for Highway Safety rated the new Explorer a best pick in its class. It garnered maximal “good” ratings in every category but one, and that – right leg protection – was “acceptable”. Their test is more rigorous, involving a 40-mph crash into an offset barrier. Alas, the big tough truck is a wuss in terms of bumper damage. In IIHS’s four 5-mph barrier crashes it sustained an average $1,358 worth of damage, putting it about mid-pack in the mid-sized utility category.

The test machine’s bottom-line suggested price, with freight, was $38,130. In addition to the items I mentioned earlier, it had running boards and an auxiliary climate control system. Payments at that price would be $773, if you laid down 20 percent, got a 10 percent deal and wrote 48 checks. Edmunds, which surveys transaction prices nationwide, says most folks are wangling $2,400 discounts on Limiteds, and the factory is providing some incentives (cut-rate financing, rebates) in many areas.

September 13, 2020
By Johnny from EVANSVILLE
Owns this car

Liked this truck, has numerous usb ports, nice A/C system, very nice in dash 6 disc player, good sound, strong V-8 engine, full size towing package, along with midget pedals, a good looking SUV even put chrome trim on it. Would even sell to a friend if any were interested. Actually slepted inside for almost a year, nice room in the back, selling it because I no longer need a vehicle this size.

Very reliable when taken care of

Has been a pleasure to own, v8 model has great pick up for an SUV. Overall comfortable and reliable when taken care of. Nice to drive, even nicer to be a passenger.

Rating breakdown (out of 5):
0 people out of 0 found this review helpful. Did you?
Show full review
See all 49 consumer reviews