What has a heavy-duty, high-performance suspension system, fat road-gripping tires and a bright red paint job?

And what packs a hearty growl that’s sure to attract the admiring glances of sports-car lovers everywhere?

What we’ve got here is the Ford F-150 Lightning, an outlandish, bodacious muscle truck designed to kick up clouds of dust or sprint from stoplight to stoplight.

The Lightning is a product of Ford’s Special Vehicle Team, a band of enthusiastic company gearheads charged with the responsibility of pinpointing small niches in the market and then developing high-performance, limited-edition vehicles to fill them.

Then they worked their magic on Ford’s hot-selling F-150 full-size pickup. The 1993 model debuted a few months after the Cobra and is now available as a 1994 model.

You’ve got to love what SVT spokesman Scott Sweeney says about the Lightning: ”It has a purposely narrow mission – to entertain and enthrall a select group of discriminating drivers. Philosophically, the Lightning is a Mustang GT with a cargo bed instead of a back seat.”

Mission accomplished. After a week and 372 highly entertaining miles, I can tell you that the Lightning is not for the timid.

It’s what’s under the Lightning’s hood that is most noteworthy. Lightning comes with a 240-horsepower, 5.8-liter fuel-injected V-8 that has been outfitted with the special GT40 cylinder heads that Ford used in LeMans racing, said Jim Sawyer of the SVT.

The racing heads and other engine modifications deliver 40 more horses over the standard 5.8-liter engine. And you can feel it when you touch the acclerator.

Normally, you wouldn’t care what a truck’s 0-to-60 mph time is, but speed is what the Lightning is all about. Officially, Ford claims the Lightning will reach 60 mph in about 7.6 seconds – about as fast the BMW 325i.

The Lightning’s engine is a beefy, deep-breathing mill that runs smoothly, but not quietly. It isn’t supposed to.

You can hear it sucking in air, and you can hear a muffled roar from the exhaust pipes – two noises that make the driving the Lightning an exciting, adrenalin-increasing experience.

The huge 17-inch tires make sure that the engine’s power is transformed into pure acceleration. Floor the Lightning’s accelerator and the tires don’t spin. Instead, you get knocked back in the seat as the truck shoots forward from a stop.

The only transmission available is a specially calibrated computerized four-speed automatic. This gearbox has been tuned to extract the maximum amount of performance from the engine. The shifts are delayed while the engine revs. Each upward shift is accompanied by a gentle nudge. You want smooth, go buy a Lincoln.

Fuel mileage is poor, but you don’t buy a vehicle like this if you care about fluctuations in gas prices.

The test truck drained both its gas tanks at the rate of just 14 miles per gallon in combined city-highway driving.

For a big truck, the Lightning is amazingly agile and easy to drive.

Its power-assisted steering is the first thing you notice. It has a nicely weighted feel that conveys a precise feeling of control. There’s no play in the steering, and response is sharp, tight and quick.

The front disc and rear drum power-assisted brakes haul the big truck to a stop with a minimum of fuss.

You can blast through a tight curve at any legal speed and the Lightning’s body will remain straight and poised.

On bumpy terrain, though, you are thankful for the snug fitting seat belts that hold you in place when the truck bounces.

Unlike other high performance trucks, the Lightning can haul or tow heavy loads.

The high-quality manner in which the F-150 is assembled is one of the key reasons why it has been this nation’s best-selling vehicle for years.

The dash is very carlike. The analog gauges are easy to read, nicely styled and sensibly arranged along with the rest of the switches and controls.

The cloth-covered bucket seats, separated by a huge console, are extremely firm, but comfortable. They are outfitted with numerous electric adjustments. If you are tall – say, 6 feet – leg room might be a problem.

The bucket seats don’t have much travel on their tracks, and pushed back fully, the rears of the seats touch the back of the cab, forcing you to sit in a more upright position than you might like.

It’s too bad the door-mounted switches for the electric windows and door locks are not lighted. Finding them at night is a bit of a chore.

But that’s nit-picking. Few vehicles deliver as much fun and utility as the Lightning.

That’s makes an already awesome truck that much better.

Truett’s tip: Ford’s F-150 Lightning is the sports car of trucks. It’s an exceptionally fast and fun-to-drive vehicle that handles well. And it is a stellar value.

Most comfortable car ever made

January 5, 2018
By Deerslayer02 from Brighton,TM
Test drove this car

Very nice car with very nice interior and a very nice exterior. One of the. Eat cars I?ve ever test drive

November 22, 2017
By Grohiik from Oregon
Owns this car

this was my first car, it is a good and hardy truck that helps me with my job, it has some faults like parts going out, but overall id say worth it.

This truck is amazing. My family and I use this vehicle for numerous purposes, including driving through the woods and through mud. The only real problem with this truck was rust, but that was our fault. We really did not wash it routinely or anyting. It is just an old beater that runs great and performs great.

Rating breakdown (out of 5):
2 people out of 2 found this review helpful. Did you?
Show full review
See all 7 consumer reviews 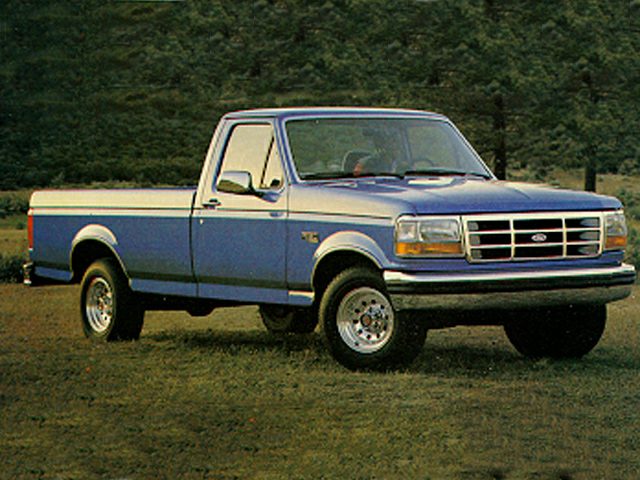