Our 1994 Ford Mustang trim comparison will help you decide.

There are many Mustang enthusiasts who probably never are going to warm up to any modern Mustang.

Time – in an automotive sense – stopped for them in 1973 on the day the first generation Mustang went out of production.

That might be one reason why Ford reached into the past for inspiration for its new Mustang. There are a lot of people out there who feel Ford made a U-turn to a dead-end street when it brought out the Mustang II in 1974.

In fact, the second generation of the Mustang – and even the third, built from 1979 to 1993 – had little of the style and none of spirit that made the original one of the most loved American cars.

But stop a minute.

Let’s say you are a fan of the older Mustangs and that your idea of the quintessential pony car is a ’66 2+2 GT Fastback with a 289 High Performance engine and a four-speed manual transmission. If that’s the case, then you ought to check out the Mustang Cobra. Chances are you’ll appreciate what Ford has done with this car.

This vehicle deserves to wear the Mustang name more than any other car Ford has built since 1973.

In terms of style and performance, the new Mustang Cobra is true to everything that made the original car so great.

Footnote: The Mustang Cobra is a limited production vehicle produced by Ford’s Special Vehicle Team. Not all Ford dealers are carrying the Cobra.

Ford has used the venerable 5.0-liter (302 cubic inch) V-8 and its derivatives in everything from dump trucks to luxury sedans during the past three decades.

However, I can’t remember Ford’s cast-iron workhorse being in a finer state of tune than it is in the1994 Cobra. Horsepower is rated at a robust 240.

With that many ponies under the hood, the Cobra strikes fast when you touch the accelerator. But the 3,300-pound car is not a one-trick pony. In addition to being a potent force from stoplight to stoplight, it is very capable of delivering superb performance on long high-speed highway trips.

These days, when one talks about a Mustang, someone is sure to mention the new Chevrolet Camaro and Pontiac Firebird with their 275-horsepower Corvette engines.

But a quick glance at the road test summaries of enthusiast magazines shows that the Mustang Cobra compares well against the two GM sports coupes.

For instance, Road & Track magazine clocked a Cobra at 6.9 seconds from 0-to-60 mph. (Ford says it measured the trip at 6.3 seconds.) Meanwhile, Road & Track timed the Firebird Formula at 6.7 seconds.

The gearing is wonderfully matched to the engine’s horsepower. At low speeds the V-8 pulls strongly. But in second gear you can reach65 mph before the tachometer needle makes to it to the 6,000 rpm limit.

From the driver’s seat, you feel as if the drivetrain is amazingly flexible.

At highway speeds in fifth gear, the engine is barely ticking over at 2,500 rpm.

Ford seems to have struck just the right chord with the Cobra’s exhaust note. It’s a low rumble that turns into a hoarse growl as the engine winds up.

The clutch pedal is smooth and easy, and the shifter clicks cleanly into each gear. This helps make the car very civilized in stop-and-go traffic.

Fuel mileage was poor, but that’s probably my fault. For the week I drove the Cobra, my right foot took on a leadlike demeanor.

For those of us who love to drive and who love cars that make all the right noises, you can’t help but wind up the Cobra’s engine each time you get behind the wheel. In the city I logged 15 mpg of regular unleaded. On a long road trip, that figure increased to a respectable 25 mpg.

The Mustang Cobra is a red-hot sports coupe, but it doesn’t punish the driver and passengers with a stiff, back-breaking ride.

Many sports coupes rely on a verystiff suspension system to keep the car’s body straight in tight curves. Not the Mustang Cobra. Even though the suspension feels soft, you’ll have no problem putting the Cobra through its paces.

I found that the body stays straight and the car remains easy to control in sharp turns. This is something of a mystery to me. One of the first things I noticed when I braked the test car hard is how much the front end nose-dives – an action usually associated with soft suspension. I didn’t think there was any way the car would handle well when the time came to push it to the limit.

I rounded some corners with my foot on the accelerator and found the Cobra was ready, willing and able to devour such curves.

The steering has a precise and lively feel, and huge disc-brake rotors on all four wheels, ventilated for quicker cooling, make for strong and predictable stops.

Underneath, the Cobra uses a live axle (instead of independent) in the rear and MacPherson struts up front.

In the past five years, Ford has really come to the forefront of American automakers with its innovative and stylish interior designs. In fact, I can’t remember the last Ford I drove that didn’t have an expressive, user-friendly interior.

The Cobra is no exception.

You feel comfortable from the moment you sit in the driver’s seat.

The dash layout is very simple. All the switches, buttons and controls are labeled cleanly and within easy reach.

Just below the air-conditioning controls is the AM/FM cassette radio and an optional CD player.

The only other control on the dash is the light switch. Cruise control switches are located on the steering wheel and can be operated with your thumbs.

On an 11-hour, 720-mile trip to Dothan, Ala., the Cobra proved to be comfortable. The leather seats are soft, but give nice support to the lower back and legs.

As with other Fords, you can adjust the lumbar support by pressing a switch on the side of the seat.

Unlike other sport coupes, the Cobra is family friendly. A child’s safety seat easily fits in the rear without blocking vision.

Not only that, but an average-sized adult can be comfortable in the rear seat. There’s a nice amount of leg and headroom.

The radio-controlled lock system is terrific. Its range was demonstrated accidentally when the car’s alarm went off when the panic button on the black plastic key ring was mistakenly pressed while I was inside a restaurant.

Since the new Mustang came out in December, Ford has increased production three times to keep up with demand.

From the base model six-cylinder version to the high performance Cobra, Ford designers and engineers seemed to have captured the look, style and, more i mportantly, the spirit of the original Mustang.

Truett’s tip: The Cobra is the meanest Mustang Ford has built since the early 1970s. The highly tuned 5.0-liter V-8 packs a venomous bite. And handling is superb.

March 5, 2021
By The Car Collector from Lakeland
Owns this car

I think this Mustang SVT Cobra Indy Pace Car edition is an excellent investment opportunity. The car is very rare and has a really low reduction number.

Rating breakdown (out of 5):
8 people out of 9 found this review helpful. Did you?
Show full review
4.0

Better than average for sure

Fun car and reliable. Glad i bought it. Someone will be happy with this car as well. Way better than average for its age. 8.5 outta 10. At least

Rating breakdown (out of 5):
3 people out of 4 found this review helpful. Did you?
Show full review
4.1

December 22, 2019
By Dustin from Lewisville, TX
Used to own this car

This vehicle was the cutest car I've ever owned. The convertible top worked perfectly, however the rear windows had trouble rolling down. I owned the V6 model. The freeze plugs broke, so we had to have it towed and repaired. The transmission seemed to vibrate when shifting into third or fourth gear. This vehicle had different style tail lamps than most other years. This was the first year of the Mustang after the square body style. I would like to find another Mustang like this one and drive it across the United States. The transmission made the car go too slow, because something was wrong with the transmission. This Mustang is one of my favorite cars. Thanks. 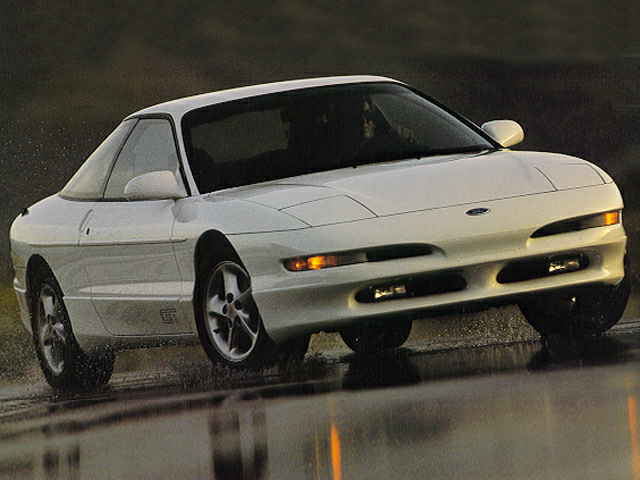