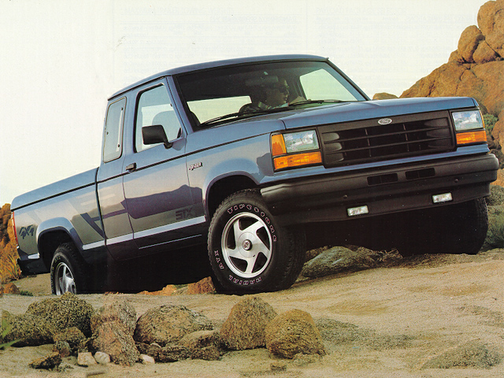 Our 1992 Ford Ranger trim comparison will help you decide.

The Ford Ranger is the best-selling compact pickup in the market.

The twin I-beam suspension allows you to throw heavy cargo in the rearbed, while at the same time not bouncing you all over the highway when there`sonly one passenger in the cabin. Complementing the suspension are all-season15-inch steel-belted radial tires and standard rear-wheel anti-lock brakes.

Four-wheel drive eliminates most of the fears of Snow Belt driving. Andif you opt to go off road, no problem. The beauty of the system is that youengage it by pressing a button marked “4×4“ on the dash. If the snow is verydeep or the mud or sand beneath very gooey, you press “4×4 low“ to maneuver.

We tested the Ranger 4×4 in SuperCab version, meaning there are a coupleof jump seats in back of the driver and passenger chairs. Little kids can sit inside with Ma and Pa and don`t have to be tossed in the rear bed with thegroceries. With those two seats, you also can store a few packages ofgroceries in the cabin to protect them from the elements.

The Ranger has a lot to offer. It`s the No. 1-selling compact pickuptruck. But that shouldn`t stop Ford from making some needed changes this fall,when the restyled 1993 replacement appears.

What Ranger needs is to be more user-friendly. Why mess with success when you`re No. 1? So you don`t slip to No. 2.

When it comes to changes, we`d like to see a driver-side air bag. Rear-wheel ABS is standard; four-wheel ABS wouldn`t hurt.

Next, take whoever invented the stiff bladder-filled seats with pull-outthigh support extension and have him flogged. If a woman did it, flog her.This is an equal punishment column.

Even without the needless thigh support extension, the seat`s forward/backward control lever is buried so far down and under the seat you have tostand on your head to reach it. Why so much effort to design discomfort?

While the whip is still warm, someone also should check out who chose togo artsy instead of practical with the outside rearview mirrors. Both are cut at an awkward angle, which makes them difficult to adjust and troublesome tosee.

The 1992 Ranger 4×4 SuperCab we tested started at $14,840. Optionsincluded the 4-liter V-6 at $179, the 4-speed automatic at a gut-wrenching$954, air conditioning at $755, power windows and locks at $367, a slidingrear window that dramatically contributes to ventilation at $113, limited slipdifferential at $238, and a preferred equipment package at $2,428, consisting of STX trim, electronically controlled AM/FM stereo with cassette and clock,speed control, tilt steering wheel and rear jump seats. A sport appearancepackage that goes unexplained on the window sticker ran $879.

Safety and performance were better than the 86 Ranger I owned prior. The hi-back seats were better than having my head but the back window if rear ended. The 3.0 v6 is far better than 2.9 v6 in my experience. Overall I think it is a good vehicle for how I use it.

Has been my baby, well cared for.

August 24, 2019
By Cactain.Bill from Sonoma Calif.
Owns this car

good solid truck, will be working years from now.I am disabled and can no longer drive the truck. With its low milage I think the new owner will be very happy with it.

January 24, 2012
By Envorious from Naples FL
Owns this car

I got this truck (92 3.0 manuel 5 speed) for 500 bucks used with 150k miles, now pushing 330k miles, I have had the tranny rebuilt and replaced the rear end ( yes people say I treat the truck like it is a F350 with the loads I put on it) it isn't the most comfortable truck ( kinda cozy but what do you expect for a small pick up truck) all in all I would have to say this is the best truck I have EVER owned and it will be replaced by anouther ranger 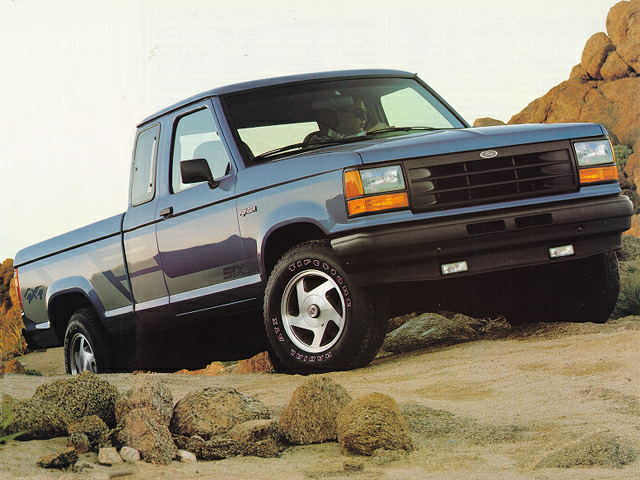