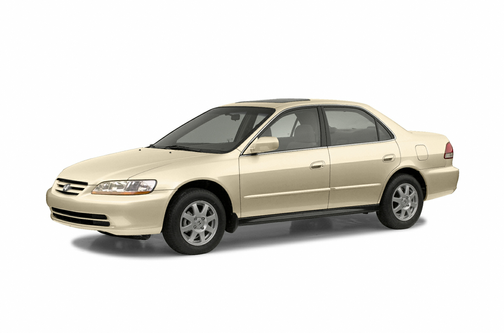 Our 2002 Honda Accord trim comparison will help you decide.

2002 Honda Accord review: Our expert's take

The guy in the brand-new Mercedes C-Class kept pulling up, then dropping back, obviously eyeballing the car we were driving down the Ventura Freeway.

Finally he pulled up alongside, flashed a big grin and gave us a hearty thumbs up.

“Wow,” my driving partner said. “It’s not often you get a thumbs up from a Mercedes driver when you’re in a Honda.”

We were in the all-new 2003 Honda Accord, successor to what has been the best-selling mid-size family car for nine of the last 10 years.

Honda Motor Co. executives have promised all year that the new Accord would represent the most radical model change ever for the company. And though the words “radical” and “Honda” rarely go together when it comes to styling, they weren’t lying.

The new Accord, which hits showrooms in September, is at once sleeker and more muscular than its predecessor. It replaces a body designed five years ago, when flat surfaces and hard edges were in vogue, with all-new sheet metal that flows.

It isn’t sensuous–although the coupe version gets close–but it is the best body ever on a mainstream Honda, and it puts to shame the new Toyota Camry and Ford’s positively geriatric Taurus, the other perennial contenders in the family car segment.

The new Accord comes with two new engine choices, a 160-horsepower inline-4 or a 240-horsepower V-6; three new transmission choices; anti-lock brakes standard at all trim levels; an improved suspension and steering setup; and a new interior that features more headroom and legroom and redesigned front bucket seats that put the Accord at the top of the class among Asian brands for comfort and support.

In short, Honda’s designers, engineers and product planners took an already good model and made it better.

Inside, the only potential problem I found during a day with the cars in the mountains between Agoura Hills and Malibu was a somewhat flimsy-feeling release mechanism on the capacious center storage bin that might not last as long as the car does.

Neat touches included water bottle holders in the sedan door panels; flat passenger compartment and trunk floors in all models (carpet underlayment fills the dips and hollows and has the additional benefit of muffling road noise); and sufficient headroom so that even in models with sunroofs, taller people can sit in the front seats without planting chins on chests.

Honda paid a lot of attention to wind noise, redesigning the side mirrors and windshield pillars and increasing the slope of the windshield to minimize air turbulence around side windows.

The Accord’s new instrument panel features a technology previously seen only on luxury brands: The instrume nts are dark when the car is empty and not in use, gradually growing brighter as doors open, the key is turned and the engine ignited. Honda says it “welcomes” the driver and other occupants by lighting up in sequence with their preparations to get in and go.

There’s even an oversize sunglass holder, an acknowledgment that a lot of people wear sporty goggle-type sunglasses that don’t fit the standard skinny Ray-Ban slots.

Of course, the more you pay, the better it is: The 2.3-liter, four-cylinder models with five-speed automatic transmission are adequate machines, and most Accord loyalists will love them unreservedly. But they won’t keep up with a similarly priced and equipped Nissan Altima, with its heftier 2.5-liter, 180-horsepower four-banger with 181 pound-feet of torque.

Honda’s five-speed manual helps a little, though, allowing the driver to manage the Accord’s 161 pound-feet of torque with more precision than the automatic permits.

An when pushed on curvy roads, the four-cylinder Accords tend to be a little light in the stern, the rear trying to lift even after the shocks and springs have reached their limits.

The base level DX, which will be priced about $15,000 but which Honda doesn’t expect to be more than a blip on its sales charts, doesn’t have a rear sway bar.

Honda engineers say they think the reason the V-6 models do what the four-cylinder versions won’t–sit tight and don’t try to bounce out of the curves when pressed to their limits–is the improved grip and stance from their bigger tires.

The four-cylinder DX and LX models come with 15-inch rubber, which ratchets up to P205/60R16 on EX and all V-6 models except one.

That one is the V-6 coupe with six-speed manual transmission, a car that Honda calls the “ultimate Accord.” It runs P215/50R17 rubber, and the smooth, short-throw six-speed coupled with the new 240-horsepower 3.0-liter engine makes it easy to smoke those tires at will in first and second gear.

The result is a machine that will let you commit multiple felonies on the freeway if you don’t watch the speedometer, that will climb the steepest grades with ease and that does it all while inducing in the driver an ear-to-ear grin.

Unfortunately, Honda won’t be bringing the V-6 six-speed coupe to market in the U.S. until early next year, after the Sept. 9 launch of the sedans and Sept. 13 launch of the other coupes.

The goal in redoing Accord this time–it is the seventh generation of a car introduced to the U.S. in 1976 as a three-door hatchback–was to keep the Accord loyalist while bringing back the passionate customer who falls for a car because of its looks and performance.

“We had the passionate customer 20 years ago,” said Charlie Baker, chief engineer for the ’03 Accord. “Now we see them over at Volkswagen, in the Passat.”

Accord has instead become the preferred car of those who shop for safety, reliability, practicality and even environmental friendliness.

The ’03 model, Baker and team hope, will attract from both sides of the spectrum.

But it is interesting to listen as they describe their baby. The comparisons are most often to the Passat, sometimes to the redesigned Altima–which is cutting a swath through the enthusiast buyer camp–rarely to the Camry and never to the Taurus, which once led the mid-size pack but now typically finishes in third place, because of rental and corporate fleet sales as much as regular retail demand.

The new Accord, Baker said, “is dedicated to the passionate customer.”

Still, practicality will sell more Accords than passion, and the Accord, in sedan or coupe, will remain a favorite with female buyers–expected to account for 56% of the mix.

Honda expects new Accord buyers to be a little younger and a little wealthier than in years past, with the typical sedan buyer logging in at 46 and married with a $74,000 annual household income, the typical coupe customer at 39, single and bringing in $69,000 a year.

Final words: Whether the motive is performance or reliability, Honda Accord buyers won’t be disappointed with the ’03 models. If an Accord wasn’t already on your list of mid-size possibilities, it should be added.

Purchased a used 2002 accord V6 ex coupe from a friend (1st owner) with 138,000 kms. Only service he did since ownership was new tires, battery, oil changes. When I bought the car I replaced all 4 brake pads & rotors. Drove it until 150,000 kms, then replaced timing belt & water pump, front engine mount. Couple months after the rear wheel bearings got noisy was replaced. I also received a letter from Honda to recall the Takata airbags, was replaced no charge at the dealership . At 192,000 kms oil pan started to leak a bit of engine oil, & transmission oil hose to engine leaked. Tranny oil and hose replaced. Next oil change I’ll be getting the oil pan gasket replaced. Owned the car for 3 years ( since 2018). A friend sold the car to me for a good deal. Spent over $3,000 CAN in repairs. Overall still a good vehicle after putting 42,000 kms since my ownership. Air conditioning still blows cold with no recharging required. Digital odometer sometimes goes blank on&off 30% of the time but comes back eventually. Factory 16” alloy wheel paint peeling off. Body paint is intact. Engine and transmission is smooth with lots of power even for today’s standard. Regarding fuel economy I get an Average of 24mpg. I’m aware of “transmission issues” on these models thus making sure to replace tranny oil every 40-50 thousand kms with Genuine Honda fluid is important. My recommendation for people interested in buying one is to make a vehicle checklist before hand that way you won’t miss on anything, Or if not mechanically inclined best to bring the vehicle to a shop for inspection prior to purchase.

In 2017 I bought the car with 191,000 for $1,400. It's a Florida car, so no rust. Even though I paid dearly for a new radiator, fuel pump, and rack and pinion, I still consider it a good car. Due to age, various interior buttons and switches are dry rotting and falling apart. It has all its original factory parts-- zippy 4 cylinder engine, nice sound system, non-leaking moon roof, cassette/CD player, cold a/c, Honda rims. Its sporty and fun to drive. I just pray it'll last til I get something newer, at which time I'll donate it charity.

I previously had a Jetta 1.8t which was fun but I'm getting older and I needed something more reliable without a Christmas tree of CEL's. I found my 02' V6 Accord and fell in love with it and I didn't do enough research before buying. Long story short I needed another trans 1 month after purchase with only 115k miles. I got a low mileage used trans and had a leaky or faulty solenoid I got that buttoned up with all new fluid and it runs great. Car is very comfortable and smooth, mpgs aren't great but I'm willing to trade for the power of the V6. I plan on keeping it for a very long time. Make sure the trans was either replaced or fixed before buying!

Rating breakdown (out of 5):
0 people out of 0 found this review helpful. Did you?
Show full review
See all 125 consumer reviews 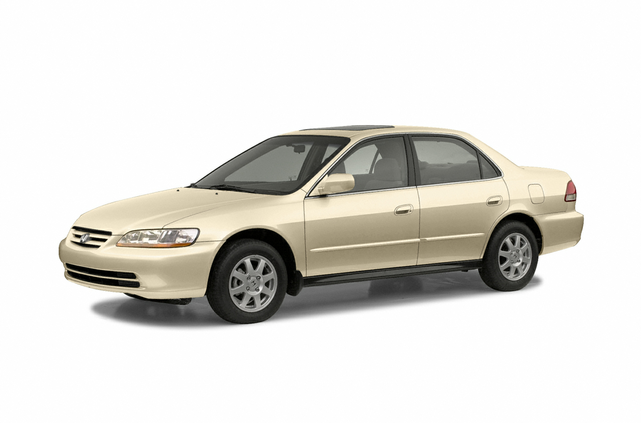 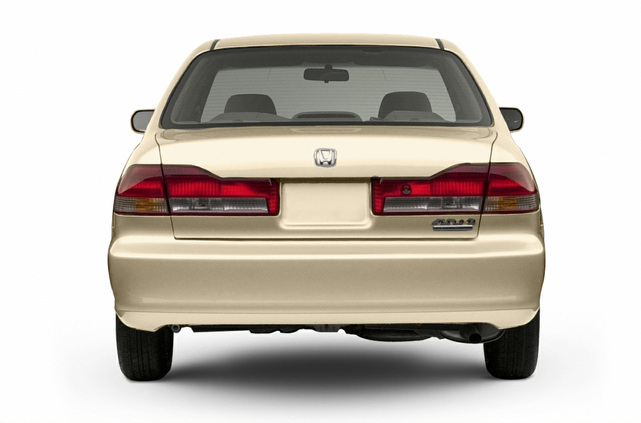 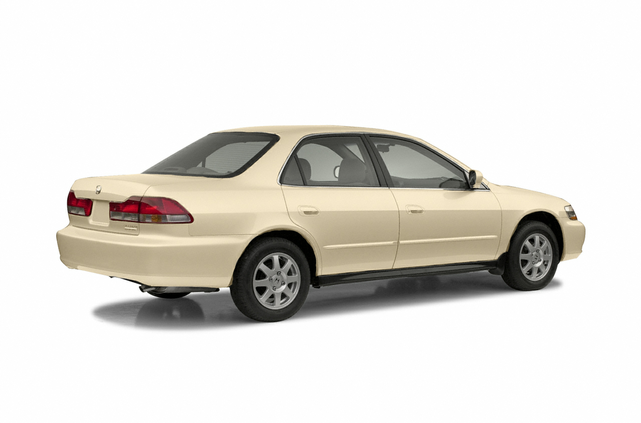 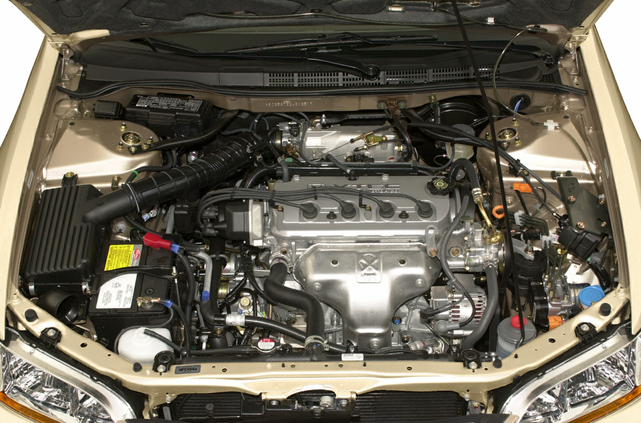 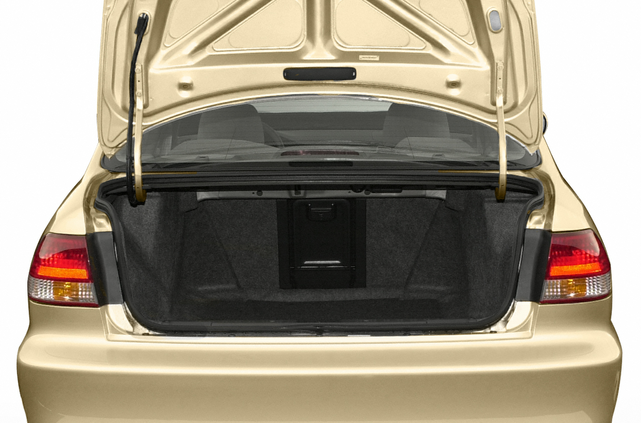 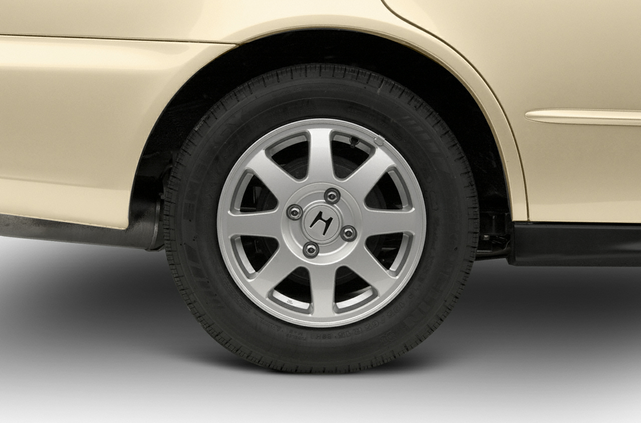 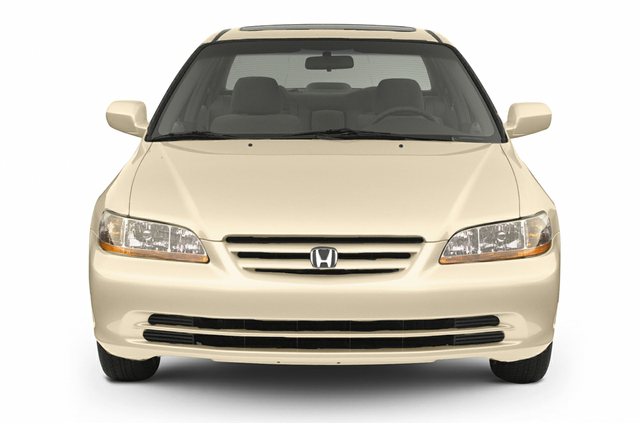 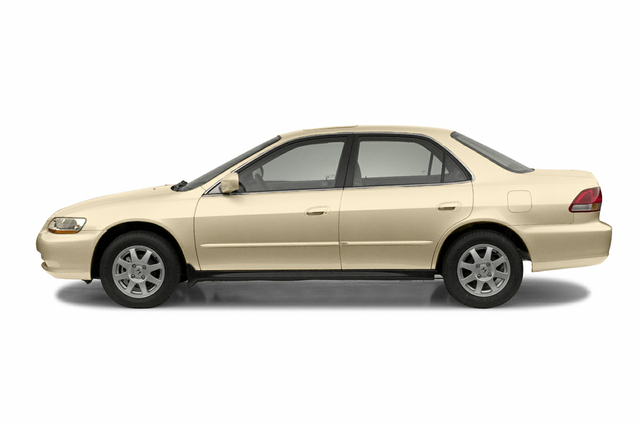 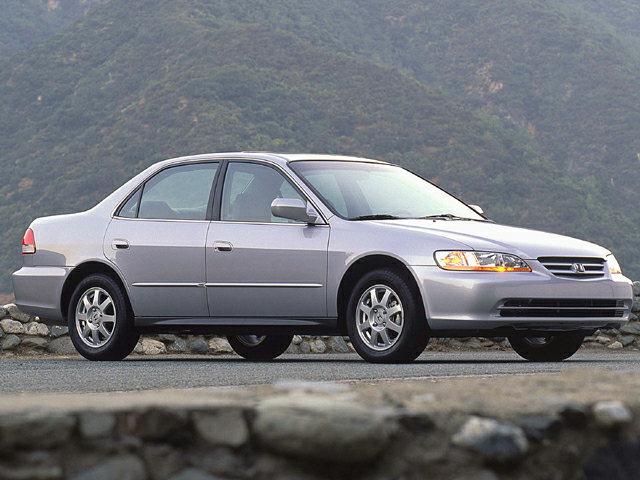 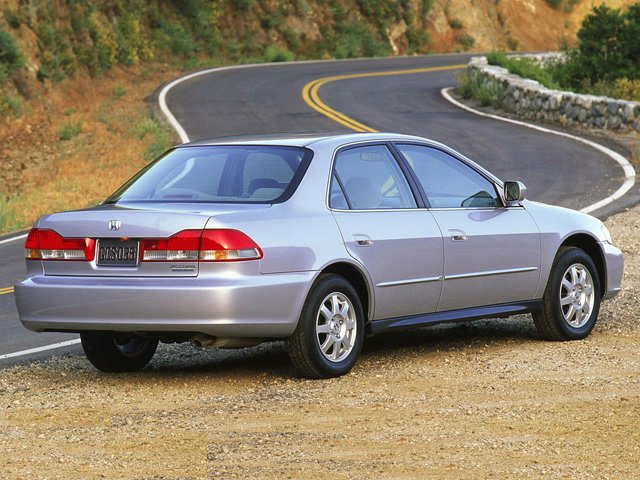 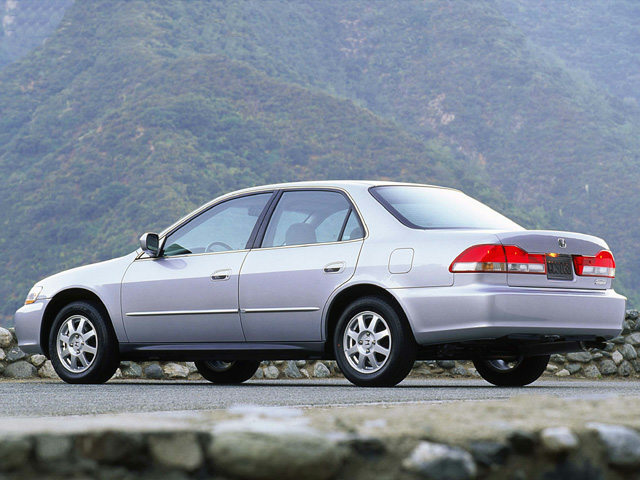 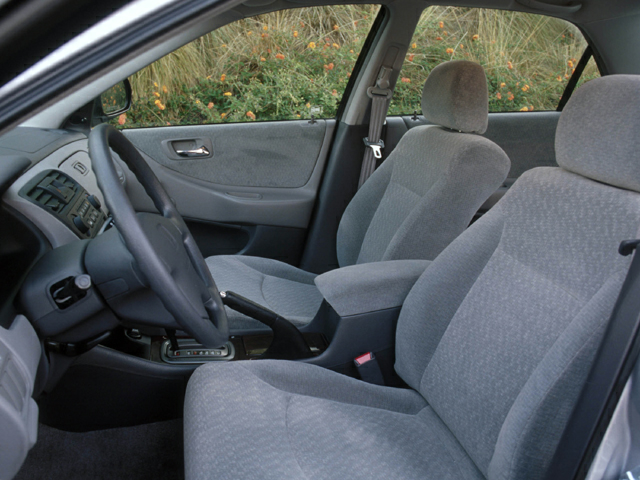 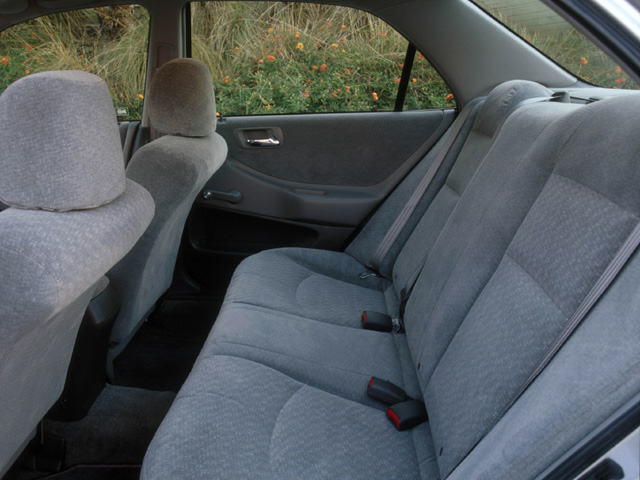 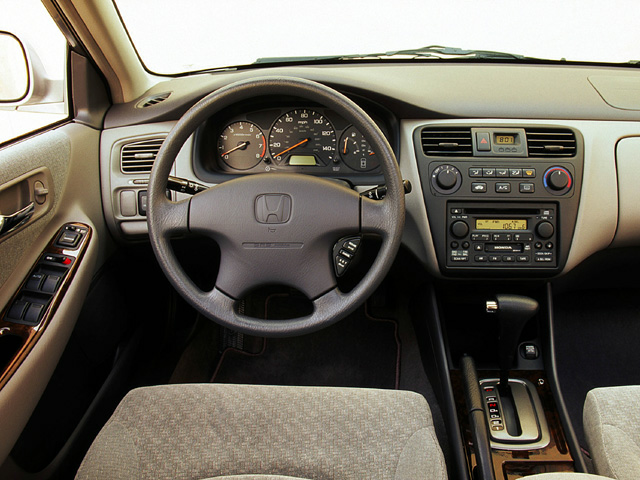 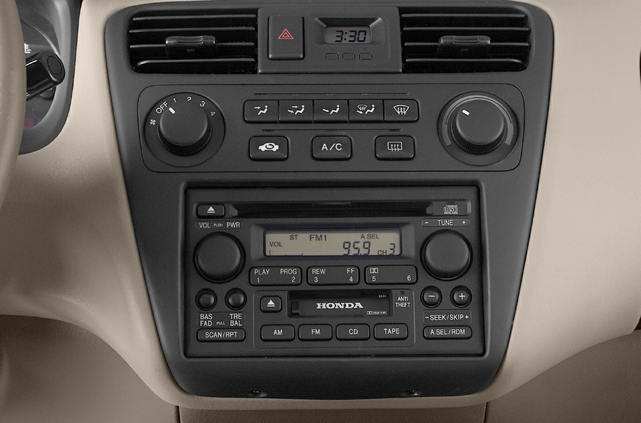 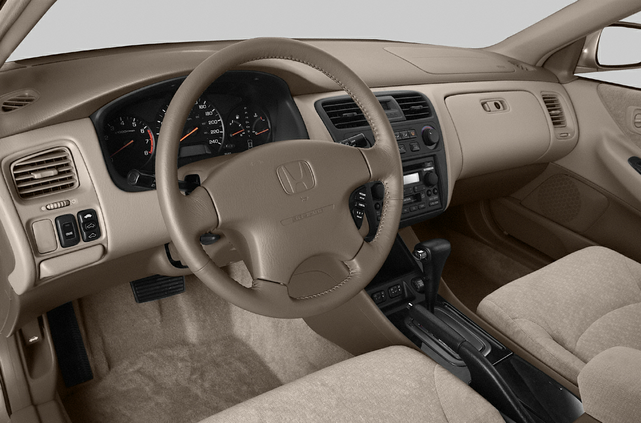 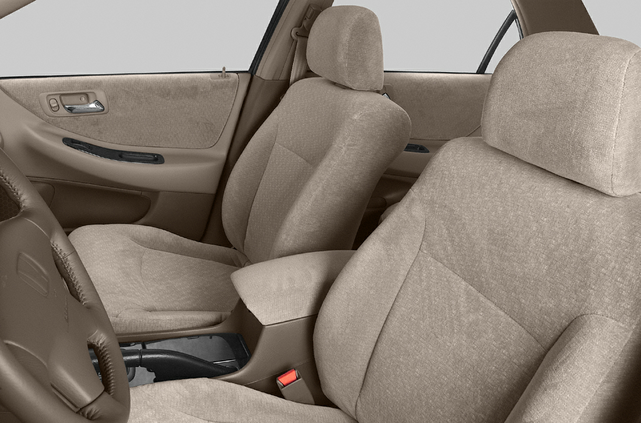 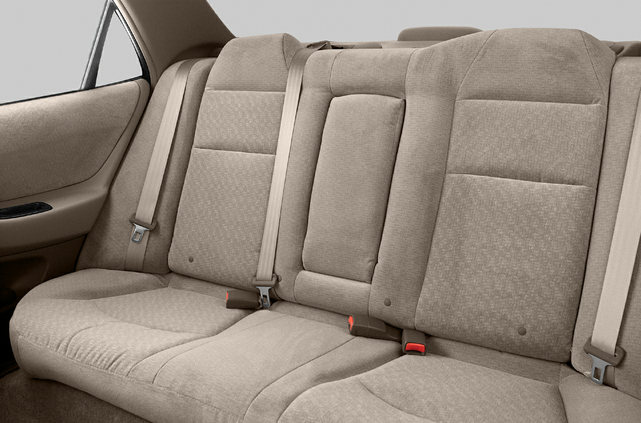