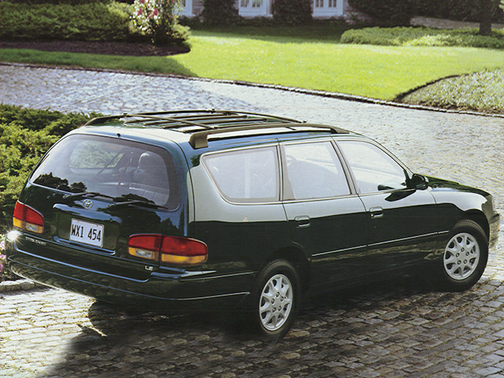 Our 1994 Toyota Camry trim comparison will help you decide.

Usually when a car is this quiet the ignition key is turned off.

Of course, some would say it shouts: “Hey, Honda, why don’t you have a V-6 in your Accord coupe?”

With almost no audible sound or visible evidence that 24 valves are pounding under the hood, Toyota needs to steal . . . er, borrow the starter shutoff feature from Cadillac’s Northstar V-8 engine, which prohibits the starter from re-engaging once the engine is running. With the starter shutoff, if you accidentally turn the key again during the engine’s very low decibel idle, the starter disengages so you don’t have to suffer the indignity of listening to metal scrape against metal.

The Camry coupe starts quiet and stays quiet even when you put the 3-liter, 188-h.p., 24-valve V-6 through its paces. While flexing its muscle quietly, the V-6 still carries a very good 18-mile-per-gallon city/25-m.p.g. highway mileage rating.

Smooth and quiet engine/transmission, lithe yet limber suspension, responsive power steering that helps you change course with minimum effort. You feel as if you’re behind the wheel of a $50,000 LS400 from Toyota’s Lexus luxury division.

The two-door coupe has nearly the same dimensions as the four-door Camry sedan. Rear seat room isn’t bad, but getting past the front seats into the rear still brings about the same hazards as any coupe. A pachyderm can do figure 8s on ice skates more gracefully than a human can pack him or herself in the rear seat of the Camry coupe.

Dual air bags are standard to protect front-seat occupants. Four-wheel anti-lock brakes, however, carry a $950 added charge. ABS is optional to keep the base price down at a time when the rising value of the yen is forcing the Japanese to write window stickers in chalk rather than indelible ink.

The Camry LE coupe’s base price is $21,218. After adding $950 for ABS and another $950 for a power glass moonroof you have to consider waiting until May to check out the $27,000 Buick Riviera coupe with a supercharged V-6, dual air bags, standard anti-lock brakes and traction control.

The $23,000 sticker is hefty, especially for a coupe trying to survive in a sedan world.

That leads to Camry’s other drawback-two doors. Consumers aren’t standing in line to purchase midsize coupes. The Camry, Accord, Taurus, Cutlass and Grand Prix sedans are doing well, thank you, but the Thunderbird, Cutlass and Grand Prix coupes are attracting dust. And a Chevrolet Monte Carlo coupe joins the inaction in a few months.

The demand is for sedans, which today offer above-average performance as well as above-average styling compared with most coupes. Since the industry thinned out and dechromed or blacked out the sedan’s center roof pillars and replaced the big bulky chrome door handle with body-colored flush handles, sedans have attracted coupe fanciers. Peppy engines complete the package. The Pontiac Bonneville SSE takes credit for leading the transformation of the sedan into a vehicle as attractive and aggressive as the coupe.

There are those who say Toyota brought out a Camry coupe simply because Honda brought out an Accord coupe and not because consumers were demanding a coupe from either.

Toyota justifies the car by saying it recognizes the limited market potential and intends to build only about 20,000 annually at its Georgetown, Ky., plant. And some of those will be exported to Japan.

March 1, 2022
By Texazann from Phoenix
Owns this car

I bought my Camry from a friend well over 200k miles the odometer stuck at about 271k I set mileage and oops lol started up now I’m at 272097. I love this car. I have not had 1 problem. I keep the tires up, change the oil every 3 months ( I know I know) my son says nooooo. But I do. Sometimes lately it smells really hot, but no visible leaks drips,?. Should I flush the radiator or leave it alone??

If you are looking for a reliable vehicle to get you from point A to point B with good gas mileage, look no further. I bought my Camry used 2 years ago with 180,000mi and I now have 240,000 miles on it and shes still running like a top. Would highly recommend to pretty much anyone.

Bought it @150k, super clean from original owner, now has 250k miles. A fantastic car. Essentially it's a Lexus with Toyota badges. I think it looks great (in black or green), a sleeper sports sedan. Won't win any races but very adequate to get up and go and keeps up. I've noticed no drop off in engine performance but transmission has dropped overdrive and 2nd gears. I read that there are shift solenoids in trans but have to pull the pan to get at them. No shop would confirm that (??) Was getting 25-30 mpg, now getting 20-25. The ONLY repairs needed other than routine maintenance have been computer/"brain" and instrument cluster @ 200k (both used and no problems since). Check engine light started cycling @ 220k and now stays on. Pro/factory trained mechanic says "just keep driving it." I want to drive it til the wheels come off! Find a good one if you can and you should have a bulletproof low maintenance/low cost ride. 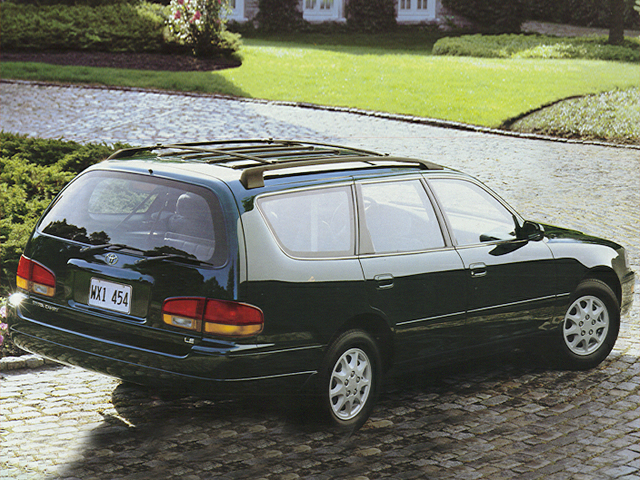