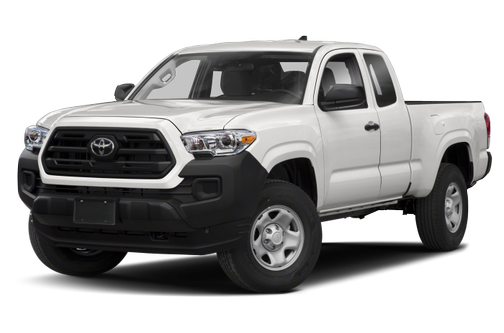 Our 2019 Toyota Tacoma trim comparison will help you decide.

Although not quite an evolution, the 2019 Toyota Tacoma TRD Pro off-road trim level will have a new look and some interesting changes. It hits dealerships in fall 2018 and competes with the Chevrolet Colorado ZR2.

The 2019 Tacoma TRD Pro is quite similar to the 2018 version, but it now shares a few upgraded styling features with the Tundra and 4Runner TRD Pro. What are those shared features? The TRD logo on the new aluminum front skid plate,  three distinct colors (Super White, Midnight Black Metallic and Voodoo Blue), similar upgraded suspensions and the Toyota Star Safety System as standard. The Star Safety System includes stability and traction control, an anti-lock brake system, brake-force distribution and smart-stop technology.

A new TRD desert air intake (also called a snorkel) is at the top of the list of new features available for the 2019 Tacoma TRD Pro. It’s designed to provide the Tacoma’s 3.5-liter V-6 with cleaner air on dusty trails or protection against water ingestion during stream crossings.

All 2019 Tacoma TRD Pro models offer a choice between a six-speed manual or automatic transmission, the latter of which allows for the inclusion of Toyota’s unique Crawl Control technology that provides computer-controlled multiple-speed trail ascent or descent. Of course, the four Fox shock absorbers are key to the TRD Pro’s performance. They have eight separate bypass zones for the front shocks (five compression and three rebound) and 11 bypass zones for the rear (seven compression and four rebound). Finally, the rear Fox shocks have a small 2-inch remote reservoir to help with cooling and performance.

Other standard features on the 2019 Tacoma TRD Pro include the newest version of the Entune Premium JBL Audio system with a subwoofer amplifier and integrated navigation and apps suite. Inside, the TRD Pro has unique floormats and leather-trimmed seats as well as TRD Pro logos.

This vehicle met all my work and play needs. It has been comfortable, reliable, and capable. It has plenty of room for family and friends.

April 30, 2021
By Jim from Dallas Plantation
Test drove this car

I fit real well in this truck . I like the gas mileage and it is awesome. The color fits me and l like 4 wheel drive. The truck works good in the snow and handles extremely well.

Rims too small should be at least 18” Engine acceleration weak, need more power Compared to the other trucks in its class the engine does not seem as powerful

Rating breakdown (out of 5):
0 people out of 0 found this review helpful. Did you?
Show full review
See all 252 consumer reviews