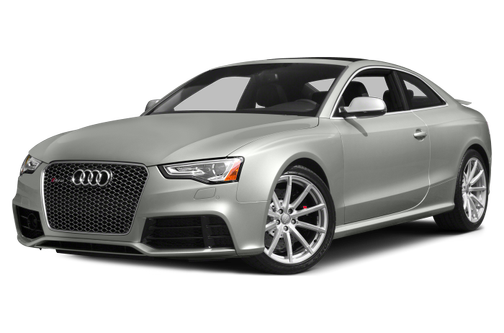 Our 2013 Audi RS 5 trim comparison will help you decide.

With its new 2013 RS5 coupe, Audi finally steps up to the BMW M3 with performance-oriented V-8 power and a chassis to match, but the lack of a manual transmission is difficult to overcome.

When I reviewed an Audi S4, the performance version of Audi’s A4 compact sedan, I noted that it was fun but wasn’t up to the level of the BMW M3, Cadillac CTS-V or Mercedes-Benz C63 AMG. The same is true of the two-door version, the Audi S5 coupe, which likewise has abandoned the previous 4.2-liter V-8 for a supercharged V-6. For 2013, Audi has upped its game by adding another letter, two cylinders and 117 horsepower to the S5 coupe, resulting in the new Audi RS5.

Compare the coupe versions of these competitors side-by-side here.

What’s in an R?
Many features, both functional and cosmetic, distinguish an Audi RS from an S. Key among them is a 4.2-liter V-8 engine, also found in the Audi R8, that’s wedged in place of the S5’s supercharged 3.0-liter V-6. Last seen in this model line in the 2009 S4, the V-8 is back, but bringing almost 100 hp more than it had back then. With it comes EPA-estimated gas mileage that’s nearly as bad as it was before — but only 2 to 3 mpg worse than the current S5 in combined city/highway driving — 16/23/18 mpg city/highway/combined — but better than the M3 (16 mpg combined), C63 (15 mpg) and CTS-V (14 mpg) coupes. All the models cited except the Caddy require premium gasoline.

Quicker Than … Stink?
But enough about fuel efficiency. The Audi RS5 is designed to satisfy drivers, not the freakin’ EPA. And satisfy drivers it does. Scribes sometimes declare a car goes as fast as stink, which sounds colorful, but stink doesn’t always go very fast, now does it? (Probably depends on the wind.) The Audi RS5 goes quicker than both stink and the S5, and roughly as quick as the M3 — an estimated zero to 60 mph in 4.5 seconds, according to Audi. Our friends at PBS’ “MotorWeek” did it in 4.3 seconds.

With its standard quattro all-wheel drive, the RS puts its power to the pavement as well as any car could. Whether equipped with 19- or optional 20-inch alloy wheels, the RS5 comes with summer performance tires, so even if the quattro all-wheel drive makes you think this is an all-season car, the only way it’s going to happen is if you also buy a set of winter tires at several hundred bucks apiece.

Truly a multisensory experience, the RS5 has a terrific-sounding engine and exhaust — at least with our car’s sport exhaust option, which also includes black tailpipes. Only the C63 AMG compares. Perhaps my favorite aspect of the RS5 is how its exhaust barks upon downshifting when in the Sport mode, which keeps the lightning-quick S tronic seven-speed, dual-clutch automated-manual transmission in lower gears and ready for action. Even if you let the car coast to a stop, in this mode the transmission downshifts through the gears and barks away each time.

Down One Pedal
What the RS5 doesn’t provide is a stick shift. Major bummer. The fact that true manual transmissions are disappearing among normal cars is understandable. It’s tougher to accept in the highest-performance cars, whose potential buyers are the mostly likely to appreciate a proper stick. Ditto for the C63 AMG.

The S5, on the other hand, offers a choice of six-speed stick or S tronic. On the road, the differences between the S5 and RS5 are more than merely noticeable. The table below shows the distribution of power and other specs among the different versions of Audi’s compact coupe, along with the BMW M3 for comparison.

As reflected above, the most dramatic improvement in acceleration comes between the A5 and S5, but that’s due in part to the A5’s use of a conventional Tiptronic eight-speed automatic transmission. Between the S5’s additional power and S tronic transmission, it’s an estimated 1.3 seconds faster from zero to 60 mph, at 4.9 seconds. The Audi RS5 shaves another 0.4 second, according to Audi.

What’s truly weird is the torque ratings, which reflect the revolution we’re seeing across the market: With each step up in size, the peak torque for each Audi engine goes farther up the rev range, and the torque maximum gets dramatically lower relative to the engine’s peak horsepower spec. (In fact, in the A5, the turbo four-cylinder’s torque peak is greater than its horsepower spec and comes at a mere 1,500 rpm.)

All the same, knowing there’s a V-8 under the hood and feeling the acceleration build to an 8,250 rpm redline is peculiar for anyone who’s obsessed over cars for a lifetime. I’ve noted the same in the BMW 3 Series, which also starts with a turbo-four and climbs the cylinder-count ladder to a V-8 in the M3.

Quattro’s Pinnacle
Audi revolutionized its cars’ dynamics when it revised Quattro all-wheel drive to send more torque to the rear wheels. Sending 60 percent to the rear as a default helps offset the cars’ typically nose-heavy weight distribution. The Audi RS5 can send 85 percent of its power to the rear wheels or 70 percent to the front when called for, and it also includes a standard mechanical sport differential on the rear axle for more robust torque management between the left and right wheels than brake-based traction control could afford. It also enables torque vectoring that can overdrive the outside rear wheel during aggressive cornering.

It’s this change, as much as the greater power, that allows the RS5 to compete with the rear-drive M3 in ways Audi never has. The nose definitely pushes when entering a corner, but judicious power application balances the car’s inertia over all four wheels. The torque vectoring further helps to tuck the nose in. The Audi RS5 doesn’t feel light, but that’s a common problem these days. It’s true of the M3, too, but I’d give the M3 the edge here, as I do when it comes to steering feedback. The M3 coupe is about 300 pounds lighter than the RS5, but I’m talking about feel; in this case, the difference is definitely felt.

Comfort Penalty
The Audi RS5 has a sport-tuned suspension that provides a firmer ride than the S5 and lowers the car by 0.8 inch — further compromising its snow compatibility. There’s a definite tradeoff in ride comfort. Especially in our test car, with its 20-inch wheels, road imperfections found their way through the RS5-exclusive sport seats and to our spines. Unlike the S5 and M3, the RS5 doesn’t offer the dual personality of an adaptive suspension.

A few of our editors complained about the seats themselves, with one objecting to what he called excessive lumbar support even when it was backed off, and another noting that the head restraints aren’t adjustable.

A Cohesive Unit
What impresses most is how well the Audi RS5 works as a unit — the hallmark of any successful performance car. The engine, transmission and quattro all-wheel drive are well-matched, and the brakes are up to the task as well. Aluminum eight-piston front calipers grip 14.4-inch wave-shaped rotors, a design that cuts down on weight without sacrificing as much surface area. Heat-resistant ceramic front brakes, measuring 15 inches, are a $6,000 option best for anyone who expects to put in a lot of track time. For comparison, the S5’s front discs measure 13.6 inches, and the A5’s are 12.6 inches.

I’m glad I got to drive an Audi S6 midsize sedan recently, because it helps illustrate what you can’t assume based on specifications and feature lists. In that car, the S tronic transmission was balkier, shifted harder when accelerating and bucked when downshifting in Sport mode. The acceleration was generally plagued with hesitation I didn’t experience in the RS5. The S6’s exhaust was also too demure, regardless of drivetrain mode, with no pleasing bark. The Audi RS5 does a better job of providing acceptable sound levels in normal driving and a satisfying growl when you want it. If you want to have a favorite brand, I’m not going to stop you, but no one should assume any automaker does every car as well as its others.

Safety
As required, the RS5 has front airbags, antilock brakes and an electronic stability system with traction control. The front occupants are also provided knee airbags and side-impact torso airbags. Side curtain airbags for the front and rear seats are also included.

A backup camera comes only in the optional MMI Navigation Plus Package, which also includes the Multi Media Interface control system, a navigation system and a Bang & Olufsen premium stereo. A blind spot warning system comes in the optional Driver Assist Package, along with adaptive cruise control and dynamic steering. Each of these packages costs more than $3,000.

Do the math and Audi’s rationalization might not satisfy you. If you demand a stick shift, the Audi RS5 won’t anyway.

Snake in the grass

Engine overheated each time the car was driven. 2 of the tires would not hold air, even after repaired. Tight cabin, outdated interior, poor acceleration. Do yourself a favor, buy a BMW M, but not from the toy barn.

Rating breakdown (out of 5):
1 person out of 8 found this review helpful. Did you?
Show full review
1.9

January 17, 2019
By Kcnitlions from State College, pa
Used to own this car

Car is beautiful, but not nearly as fun to drive as it should be. Understeer was an issue, as was seat adjustment. Very uncomfortable ride. Significantly less drivable than the M3, which is a better car in every aspect. Also, couldn’t keep air in the tires, and the engine overheated every other day.

Rating breakdown (out of 5):
1 person out of 5 found this review helpful. Did you?
Show full review
4.7

Full disclosure, I've only owned this RS5 for about two weeks so far. That's the only reason I docked a star in reliability. If you do some research you will find that these cars are very reliable, but very expensive to work on, even routine maintenance. I docked one star for performance because there are cars faster and more capable than a RS5, but they are almost exclusively pure sports cars, like a 911. In a straight line this car is a monster, especially at highway speeds. In a canyon it's capable but if the road surface isn't in good shape it doesn't feel as precise as a more pure performance car, like a WRX or a Miata. I bought the car in Southern California and drove it home to NE Oregon and never climbed out of the car sore. My wife and I spent 10 hours in the car on the first day and were able to stay comfortable all day long. This car has an Audi badge and it has the level of comfort you would expect. The fit and finish is excellent and everything is laid out in a logical way making the car easy to use. It has all of the options you would expect to find in a Prestige level S5 plus a V8 engine. Again the car has an Audi badge and it lives up to that. In summary you can probably find cars faster or more luxurious than this car, but probably not both. At least not one that a middle class person can afford. I love this car.

Rating breakdown (out of 5):
6 people out of 6 found this review helpful. Did you?
Show full review
See all 15 consumer reviews

All model years for the Audi RS 5 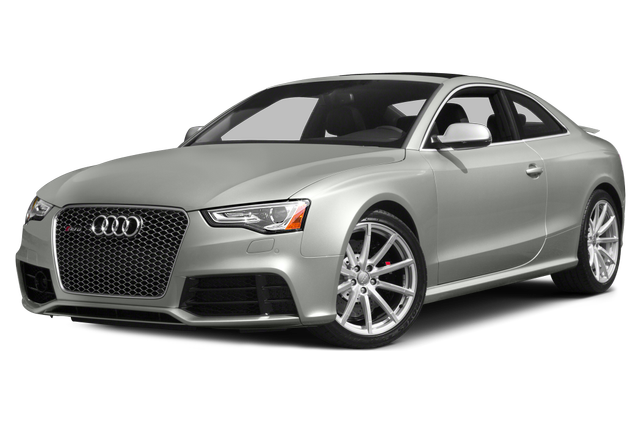 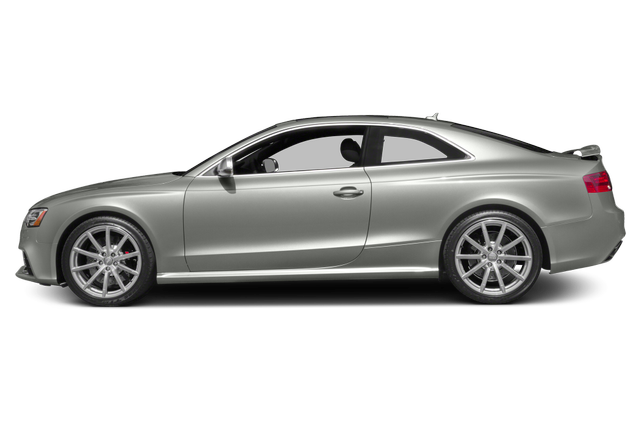 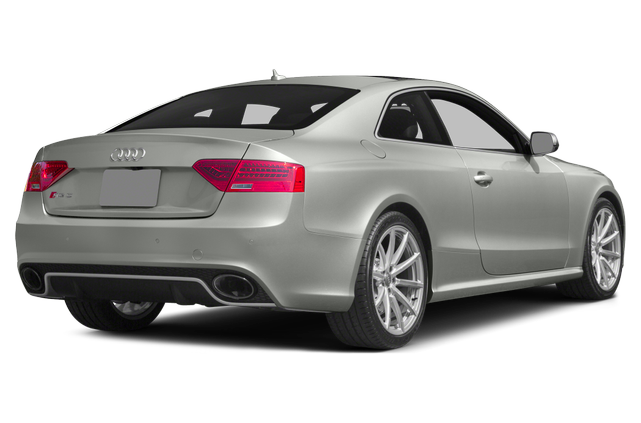 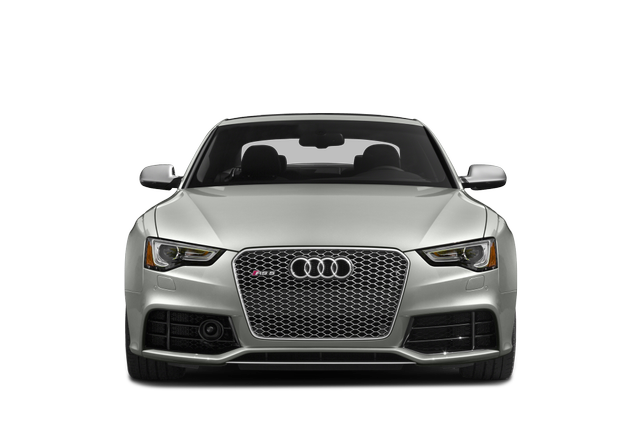 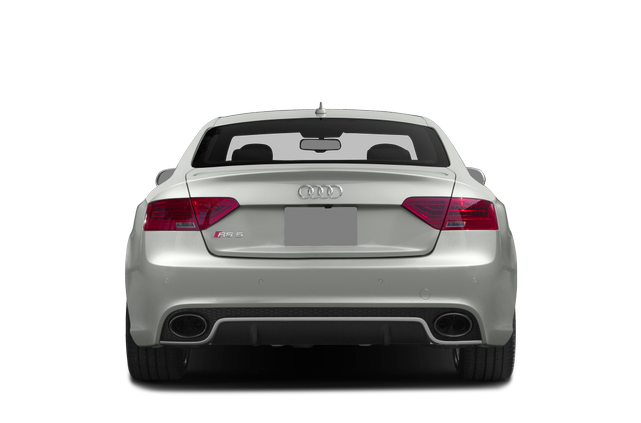 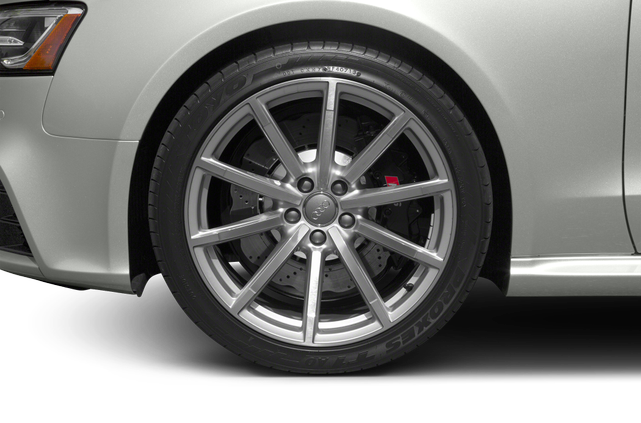 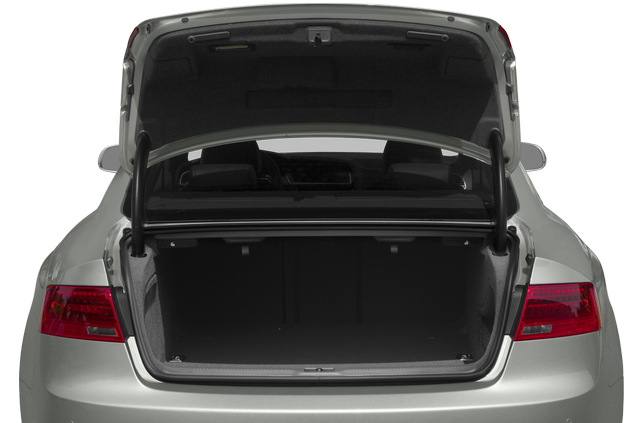 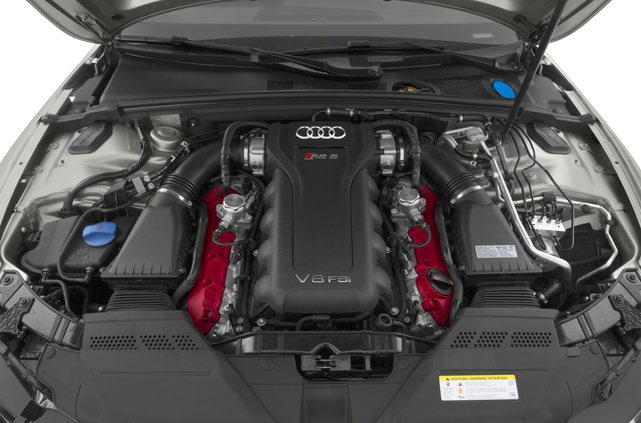 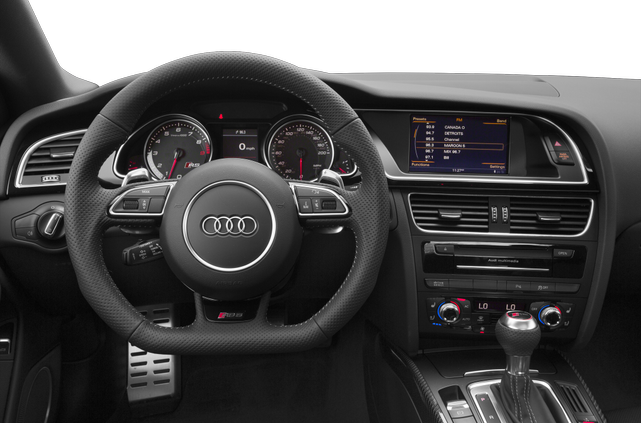 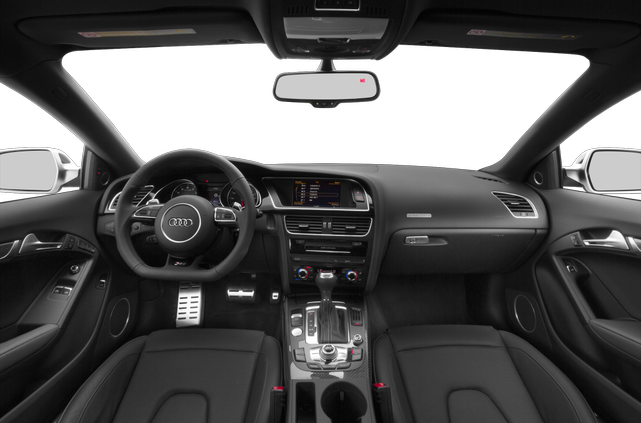 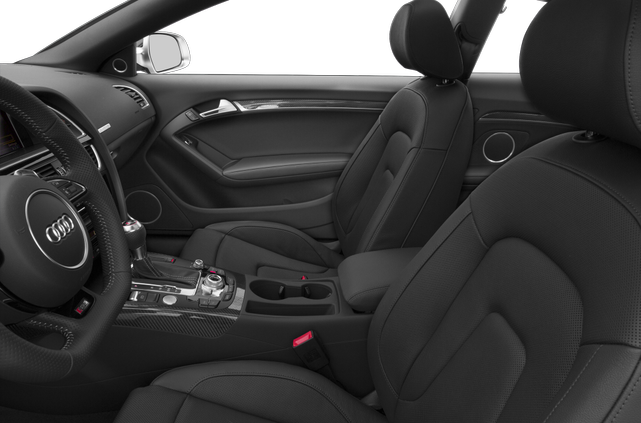 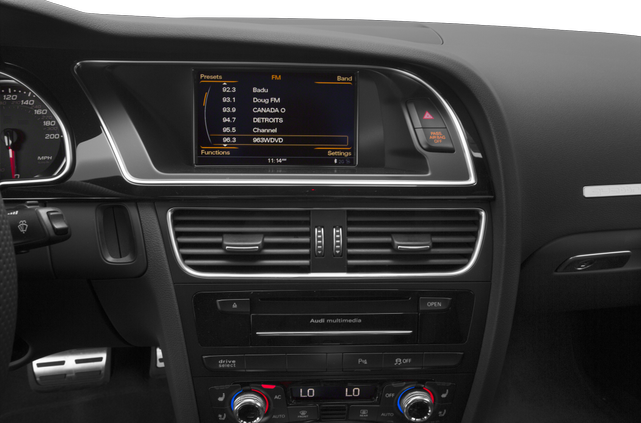 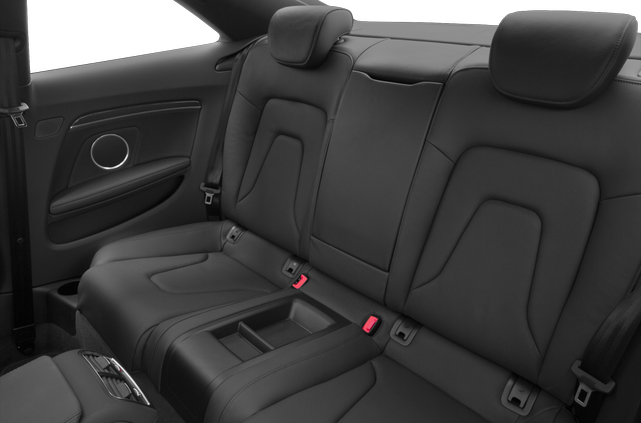 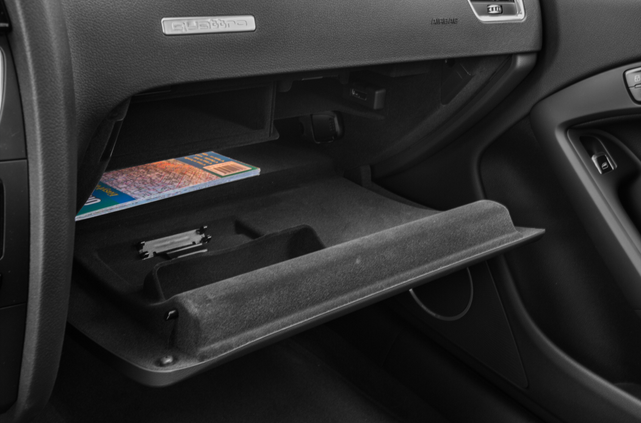 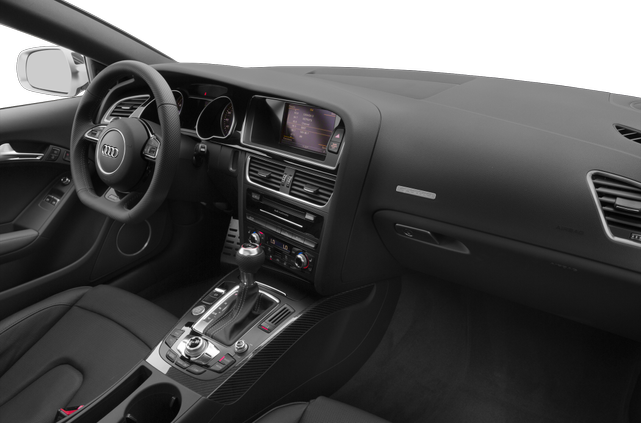 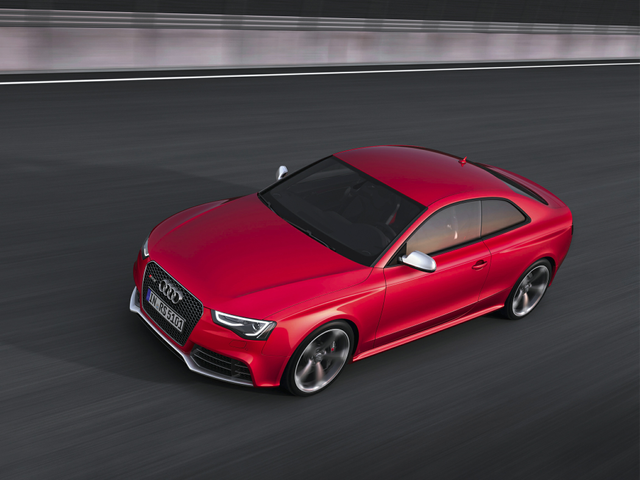 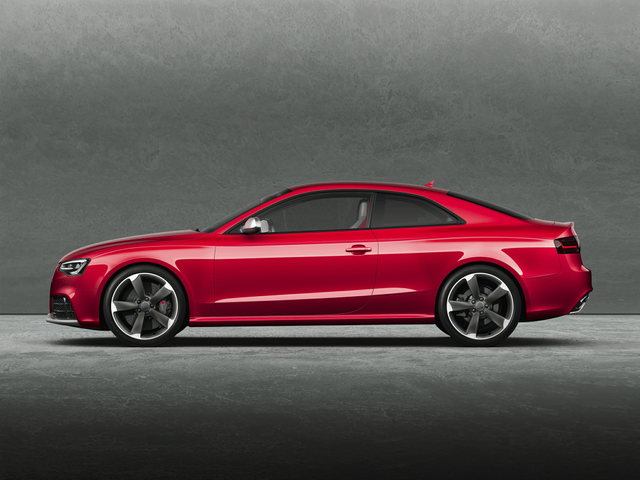 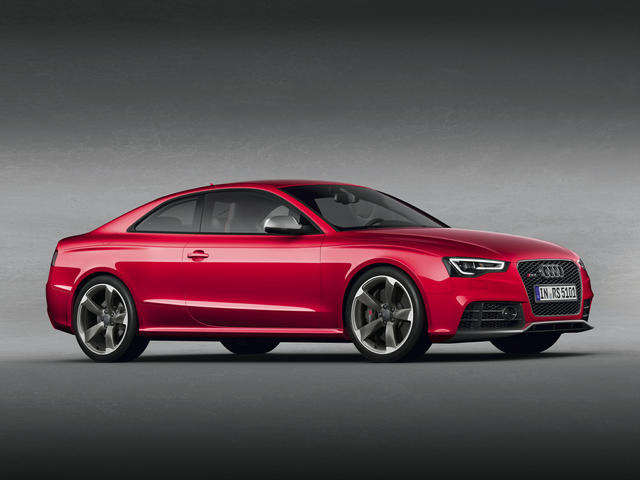 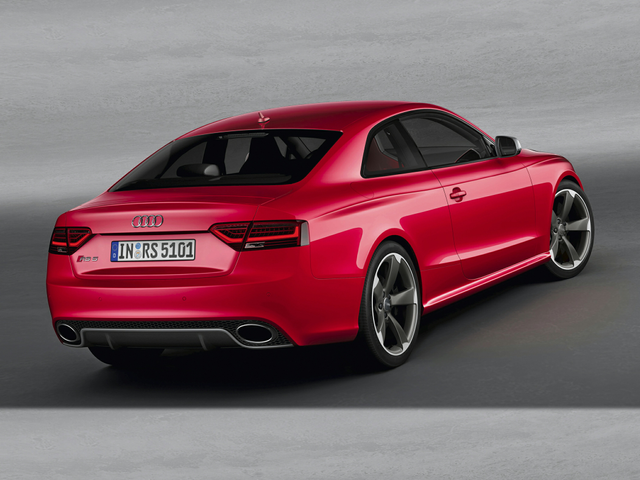 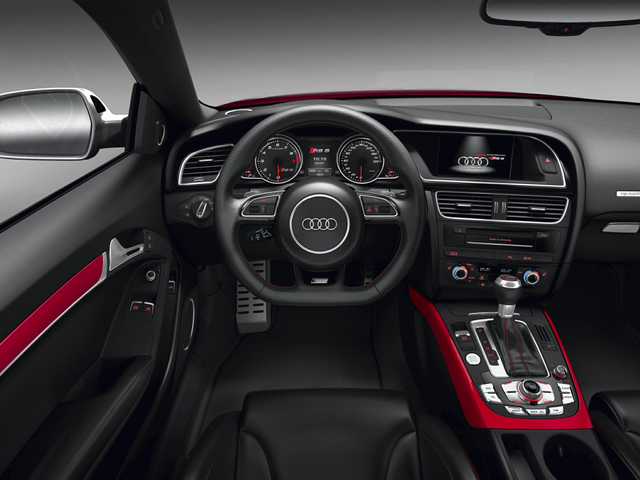 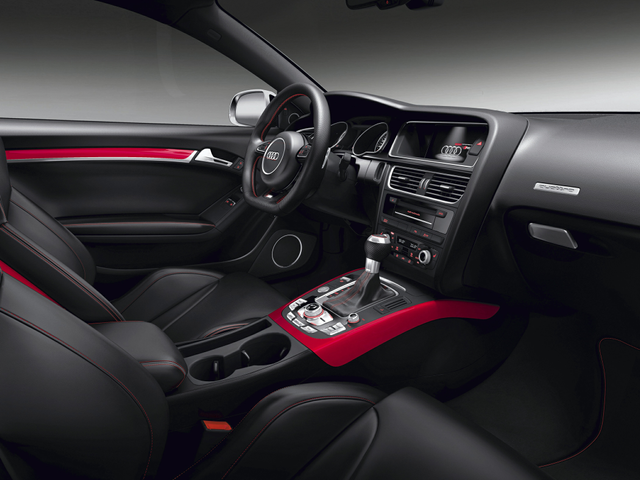 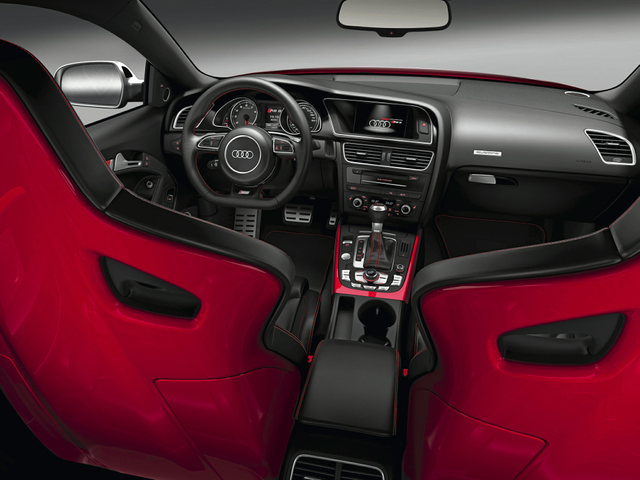