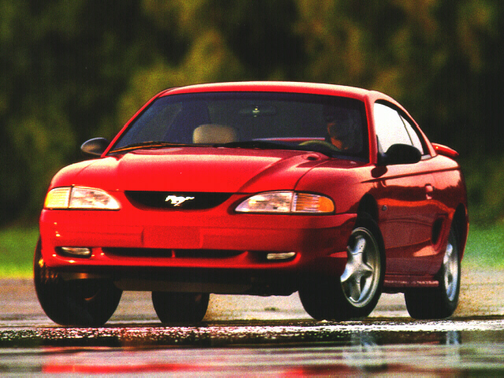 Our 1996 Ford Mustang trim comparison will help you decide.

Adding power may make a better sport coupe, but it doesn’t always make a better ragtop, and Ford’s ’96 Mustang Cobra Convertible is yet another case in point.

I don’t mean to suggest that the 305-horsepower, all- aluminum version of Ford’s 4.6-liter, V8 engine makes the going less stimulating. Au contraire.

Its performance is distinctly different from the big 5.7- liter V8s available in the Chevrolet Camaro and Pontiac Firebird. But when all those valves (32 of ’em) and overhead camshafts (four) start turning at higher speeds — 4,000 r.p.m. and above — this engine is pure delight.

As addictive as it is, however, the engine’s additional power also magnifies the basic weakness of this chassis.

Even though the current Mustang was specifically engineered with the convertible in mind, and Ford’s Special Vehicle Team has done extensive strengthening for the Cobra version, there’s still too much flex in the chassis.

And that adds up to a car that isn’t quite sure what it wants to be.

For all the engineering updates that went into the latest Mustang make over, Ford stopped well short of a redesigning the car from the ground up.

Even though this is America’s favorite sporty car, its annual sales didn’t justify the investment that go with an all- new car.

As a result, this is the oldest chassis in Ford’s entire inventory, rear-wheel drive or otherwise.

New suspension components and other engineering tweaks can give an old chassis a new lease on life in terms of ride and handling. The Mustang Cobra coupe provides striking proof. But they can’t really compensate for the absence of a roof.

As a consequence, the convertible version has shakes and shudders in bumpy going that don’t show up in the coupe.

I emerged from a week of driving the Cobra convertible with a sense of the engine being considerably faster than the rest of the car.

In sporty driving on twisting back roads, the rear end hops around nervously on small chatter bumps, and overall ride is compromised by little things like freeway expansion joints, which become just a bit too perceivable to both the driver and passengers.

Structural compromises also show up in the noise department.

Convertibles are notorious for accumulating rattles and squeaks as time goes by, and our Cobra tester had already developed one rattle somewhere in the left rear quarter, even though there were fewer than 2,500 miles on the odometer.

With a suspension tuned to deliver sports-car handling, plus aggressive low-profile tires, it seems likely to me that other irritating body and chassis noises will join in as mileage accumulates.

There was another noise source in our test car that had nothing to do with the structure.

The Mustang Cobra only comes with a five-speed manual transmission. An automatic is not even an option. That transmission and rear end produce a little mo re gear whine than is really acceptable by contemporary standards. This is audible at almost all speeds, but it becomes particularly annoying in fifth gear at fast freeway velocities.

Drivetrain noise such as this might be OK in a racing machine, but it’s out of place in a street car.

On the plus side of the noise ledger, the V8 engine produces very sophisticated music when it’s making power.

It’s not the lazy basso rumble we’ve been conditioned to by decades of Detroit overhead valve V8s, but I find the blend of whiskey tenor exhaust and precision-orchestrated overhead cam machinery is every bit as seductive.

While the big difference between the Cobra and the other Mustang convertibles lies in things that don’t show at a glance, there are a few visible reminders.

The Cobra coupe and convertible come with their own unique set of handsome 17-inch aluminum alloy wheels, and sporty bucket seats with better than average lateral support and ery good long-haul comfort.

The seats in our test car were clad in creamy black leather that made a spiffy contrast with the arctic white exterior and the white top, a combination that got plenty of longing looks during a weekend of cruising the Hamptons on New York’s Long Island.

Another interesting Cobra touch is the instrument package. By day, the gauges are white with black markings. But at night, the lighting reverses the effect, and the numbers glow bluish white on black. Gimmicky, perhaps, but definitely cool.

Our tester was also equipped with a very good AM/FM/CD sound system, although its controls could use the upsizing we’ve seen in some other newer Ford products.

Operation of basic systems was precise and free of glitches.

The top is simple. Undo the two latches atop the windshield, touch a button and down it goes.

There’s a glass rear window — no concerns with plastic window fogging or cracking — equipped with an electric defogger, and the top seals well. No wind whistles and no leaks in our car-wash check.

Shift engagements for the five-speed transmission were exemplary, and the steering provided good road feel, albeit with a little more low-speed power assist than I like in a car conceived to satisfy sporty appetites.

Like most sporty coupes and convertibles, the Mustang is very short on rear-seat legroom and trunk space.

If four-passenger seating is a priority, Chrysler’s Sebring JXi is worth a look, although you’ll give up the option of V8 punch that’s available in the Mustang, Camaro and Firebird.

If you want four-passenger seating with performance, the Saab 900 V6 and 900 Turbo convertibles are possibilities, although the price goes up to around $40,000.

Our Cobra convertible test car was some 10 grand south of that, but still in the realm that’s likely to make most of us think more than twice.

The basic Cobra ragtop starts at $28,105, a figure that includes the comfort and convenience features you’d expect of a car in this price class.

Our test car was enhanced by a $1,335 preferred equipment package that provided leather seats, compact disc player and antitheft system, pushing the total perilously close to the $30,000 frontier.

Naturally, this includes the extensive suspension tweaking by the Special Vehicle Team plus that superb 305-hp V8.

But it seems to me that the Cobra convertible makes promises it can’t quite keep.

True, the power is intoxicating, but its handling and ride don’t quite keep up.

Beyond that, this engine likes revs. It doesn’t have the kind of relaxed low-r.p.m. muscle you get in the 285-hp versions of GM’s 5.7-liter V8s, which are offered with an automatic transmission option.

Classic American pony-car ragtops are all about cruisin’ and lookin’ good. The Cobra convertible certai nly does this, but the GT version — with its 215-hp 4.6-liter V8 — does it just as well, for about $4,000 less.

If you’re interested in all-around performance — handling, as well as straight ahead — the Cobra coupe is an excellent choice.

But unless you happen to be a collector, the Cobra convertible is harder to justify.

Without a roof, the Mustang Cobra is like a star sprinter trying to run the 100-yard dash in street shoes.

He’ll look good trying to do it, but it doesn’t quite make sense.

Rating breakdown (out of 5):
0 people out of 16 found this review helpful. Did you?
Show full review
4.1

June 5, 2019
By MustangFan7 from Hampshire, IL
Owns this car

Fun summer ride you'll enjoy. Top down comfort. V8, all the ponies you need to get up and go. If you like to tinker this is the car for you to add your personal touch!

Wow! Incredible, it’s a ‘96 son born in ‘99 and this car has been waiting his entire life for this day! Fire engine red, convertible, tried turning O/D off and realize the training wheels will stay on because this car MOOVES! Read every review, All Love it After all these years. First engine you can see and work on together! 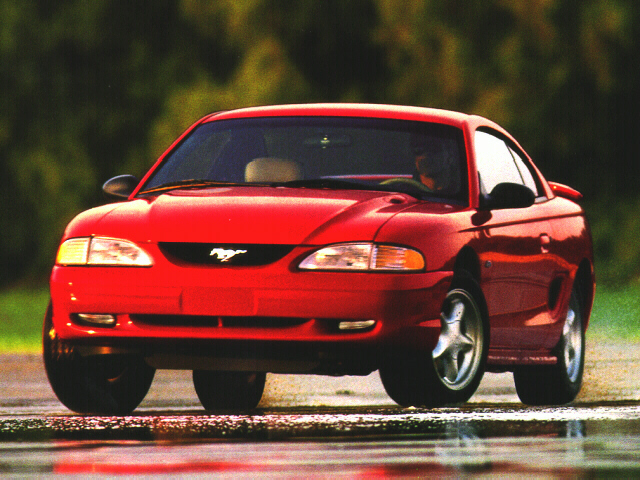 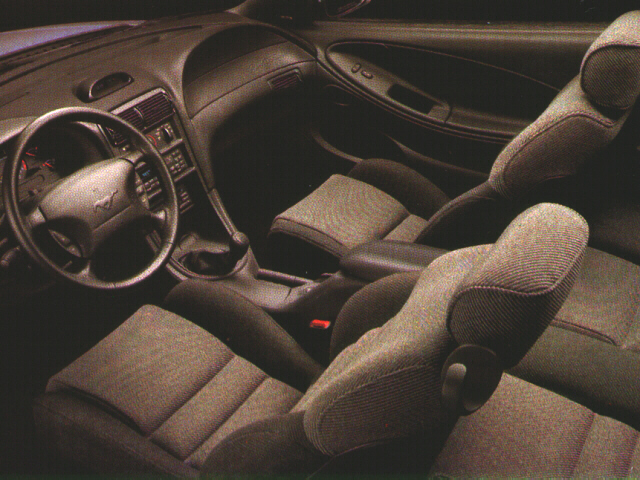