Our 1997 Ford Mustang trim comparison will help you decide.

Give a Ford Mustang to a bunch of high-performance car nuts and what do you get? The Mustang Cobra.

Tweaked by the Special Vehicle Team (SVT), Ford’s in-house hot rod shop, the Cobra is not only considerably faster than the standard Mustang but also stops quicker, rides smoother and acquits itself better in the pot-holed world of everyday driving.

Cobras come in coupe or convertible. Production is limited to 7,000 coupes and 2,450 convertibles, and they are sold only through the 707 Ford dealers licensed to sell SVT products. The coupe starts at $25,860 and the convertible $28,660.

Balanced performance is the key to vehicles developed by SVT. Their credo is much like that of European makers who value handling and braking as much or more so than outright acceleration. Mustang Cobras are more than just stop-light wheelspin artists. They are cross-country runners as much at home galloping down country lanes as cruising the interstates.

With a suspension tuned to be firm but pliant, and with bigger brakes both front and rear, Cobras are designed for enthusiast drivers on a reasonable budget. With a list price of just under $26,000 it is one of the performance bargains of the year. It scoots to 60 mph in 5.9 seconds and has a top track speed of 152 mph. That compares favorably to a Camaro or Corvette.

The most significant difference between the Cobra and a regular Mustang GT is found in the engine compartment. Both have 4.6-liter V8s, but the Cobra uses a double-overhead-cam (DOHC) version that pumps out 95 more horsepower — 305 versus 215. That is a quantum leap.

The Cobra’s engine breathes with greater efficiency due to four valves per cylinder and a twin-throttle-body fuel injection system. Normally an engine so configured would show its stuff only when revved high, but that is not so with this one. It has more than adequate pulling power at low speed, yet loosen its reins and the added shot of adrenaline when the secondary throttles open at 3,250 rpm will knock your hat into the back seat.

This is a car that demands your undivided attention if you intend to explore the full potential of its performance envelope.

Even though the suspension is tuned to provide a reasonably supple ride on city streets, it is still firm by most passenger-car standards and can be jarring over sharp bumps. The 17-inch wheels are shod with low-profile, high-performance tires picked for their grip. Consequently, the ride they offer is occasionally rough, but that is a worthy tradeoff for the security they provide when you knife into an exit ramp with excess exuberance.

True to its muscle car bloodlines, the Cobra is a vehicle that requires physical input to get a performance output. The gearshift is firm and direct; the clutch pedal heavy but not tiring. A trip in rush-hour traffic will require more effort than the family sedan, but the results you get are more satisfying if you like fast cars.

The compromise continues ins ide, where a small back seat is only usable for a short time by adults. Ask my wife, who volunteered to scrunch up back there for a short trip when there were three of us aboard. Her knees were tucked up under her chin and her head rubbed the roof. The back seat is a space best left for the young’uns.

Up front, things are much better. The heavily contoured bucket seats provide the kind of support needed for vigorous driving, and they have a wide range of adjustment. Headroom is none too generous, but that didn’t bother me (a benefit to being less than six-feet tall).

The Cobra’s instrumentation is much like that of the standard Mustang except the dials have white faces with black numbers. At night they reverse colors and the numerals glow light green. Very pleasing on the eyes.

One of my only gripes concerns the outdated stereo that has confusing push buttons instead of nice large knobs like most of the other Ford products.

The cupholder that folds out of the console b ween the seats interferes with your right elbow.

Since the Cobra came out in 1994 the only major change has been the addition of the twin-cam engine last year. Visually, the 1997 is almost identical to the 1994. A Pacific Green paint has been added to the red, white and black colors specific to Cobras.

Warranty
The basic warranty is for three years or 36,000 miles.

Point: The Cobra is a Mustang on steroids. It has more horsepower, bigger brakes and a more pliant ride.

Counterpoint: The old-style radio controls need upgrading, and the back seat is a challenge for adults.

1997 SVT Cobra - 63k miles - 2 owner - Rio Red Convertible - 4.6 L 32 valve V8 - 5 speed manual transmission - all original - the vehicle is one of 3088 made by the Special Vehicle Team in 1997... this is one sweet ride and is all original with the exception of a K&N air filter and a sequential turn signal conversion... serious callers only. My left knee is telling me it's time to look for an automatic transmission in my vehicle...

2nd owner vehicle that has been meticulously cared for since new. If I had to use one word to describe this vehicle... the word I'd use is "pristine".

December 13, 2019
By Shifter from Bloomington indiana
Used to own this car

I had a 1997 Ford Mustang 3.8 l with a 5 speed automatic, previously owned by chip Foose. It was the best car I’ve ever owned. I would trade the world to have the car back 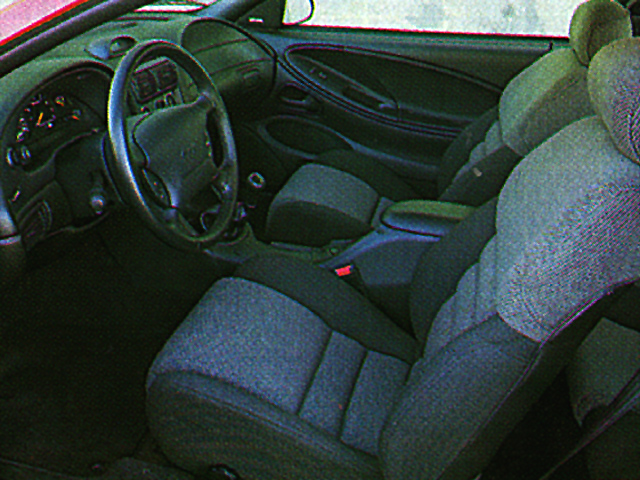