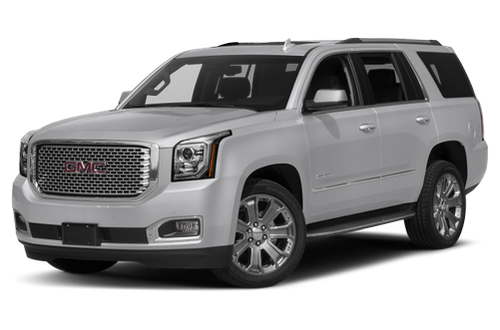 Change year or vehicle
$26,097 — $46,081 USED
7
Photos
View Local Inventory
No listings at this time Get the latest resale value

The new 2016 GMC Yukon and Yukon XL Premium Edition are available with 22-inch chrome wheels, one of many features we saw when we go up close and personal with the just-released version of this popular SUV from the GM brand.

The 2016 GMC Yukon is a full-size SUV, related to the Chevrolet Tahoe, that seats up to nine. It competes with the Nissan Armada, Toyota Sequoia and Ford Expedition. It's available in SLE, SLT and Denali trim levels. The Yukon XL, an extended-length version, is covered separately.

For 2016, the GMC Yukon can be equipped with an Enhanced Driver Alert Package. This option package adds automatic high-beams and lane-keeping assistance. A capless fuel filler is now standard.

How Does the 2016 GMC Yukon Compare to Other SUVs?

While the Yukon is more expensive than the Tahoe and offers near-luxury trims like the Yukon Denali, it doesn't match up with luxury SUVs like the Infiniti QX80, Lincoln Navigator and Mercedes-Benz GL-Class.

What Features in the 2016 GMC Yukon Are Most Important?

The 2016 GMC Yukon SLE and SLT come standard with a 355-horsepower, 5.3-liter V-8 engine, while the Denali gets a 420-hp, 6.2-liter V-8. Rear- and four-wheel drive are available on every trim. The SLE and SLT include a six-speed automatic transmission, while the Denali comes equipped with an eight-speed automatic. Significant standard features include a backup camera, front and rear parking assist, a 10-way power driver's seat, automatic climate control, an IntelliLink multimedia system, LED running lights, and an aluminum hood and liftgate. As is required in all new cars, the 2016 Yukon includes front airbags, an electronic stability system and antilock brakes.

The 2016 GMC Yukon is a good fit for shoppers who enjoy strong maneuverability in a full-size SUV, an expansive, quiet interior and an available safety alert seat. However, cornering reveals truck-like body roll, and the small cargo space behind the third row may be disappointing. In addition, small dashboard buttons can be challenging to use.

First time to own a GMC and I am very impressed

This car was exactly what we were looking for, and for a used car, it was in excellent condition. First time owning a GMC and will definitely consider a GMC next time we purchase. Read full review

by dmkproperties from West Monroe LA on April 25, 2020

The 2016 GMC Yukon currently has 5 recalls

All Model Years for the GMC Yukon

Certified child passenger safety technicians conduct hands-on tests of a car’s Latch system and check the vehicle’s ability to accommodate different types of car seats. The Yukon received the following grades on a scale of A-F.*
* This score may not apply to all trims, especially for vehicles with multiple body styles that affect the space and design of the seating.
For complete details,
read the full report