Our 2016 Chevrolet Camaro trim comparison will help you decide.

The verdict: Featuring all the drawbacks and none of the visceral pleasures of more powerful Camaros, the turbocharged four-cylinder RS model is not our preferred version.

The Chevrolet Camaro received its first major update in years for 2016, and we have thoroughly enjoyed it in both SS V-8 (see the review) and RS V-6 forms. Both of those models are outstanding performance cars; the SS even won our 2016 V-8 Muscle Car Challenge. Now a third powertrain has joined the lineup at the entry level – a turbocharged 2.0-liter four-cylinder, seen in other GM products such as the Cadillac ATS and CTS. But with 275 horsepower on tap, is it still accurate to call the turbo Camaro a muscle car?
Exterior & Styling
This actually may be the best-looking version in the Camaro lineup. Start with the plain-Jane 1LT model, which has no fake hood scoops or other baubles, and add the RS Package with blacked-out 20-inch wheels, LED taillights, bi-xenon headlights, unique grille and subtle rear spoiler. Paint it all in one of the most vivid reds I’ve ever seen, and it becomes a bit of modern sculpture – sleek, low, wide, with some beautiful hood and fender lines blending into its muscular haunches. It looks like a proper muscle car, able to take on the toughest, fastest, meanest Detroit offerings.
How It Drives
Unfortunately, one press of the starter button reveals that it’s not ready to do any such thing. This version of the Camaro is powered by a 275-hp, turbocharged 2.0-liter four-cylinder engine. It produces 295 pounds-feet of torque — more than many V-8 engines made not even a decade ago — and is good enough to scoot the Camaro from zero-to-60 mph in just 5.4 seconds with the optional eight-speed automatic transmission, according to Chevrolet. The engine feels similar to the Ford Mustang’s EcoBoost 2.3-liter turbo four, in that most of that torque comes on in the midrange. Plant your foot and row through the surprisingly clunky six-speed manual gearbox, and you’ll notice the greatest acceleration happens as the needle climbs above 3,000 rpm, but the small four-cylinder then runs out of steam at higher revs. It’s great around town, and given the lightness of the Camaro platform and its excellent handling characteristics (two descriptors it still amazes me to write), it makes for an entertaining sports car.

But it comes with no drama, meaning the good kind. Aside from the car’s looks, the powertrain provides no thrills. There’s no aural punch to the exhaust soundtrack, no visceral grunt to match the car’s appearance – close your eyes (as a passenger) and you may as well be riding in a Chevy Cruze. The Mustang EcoBoost has received some flak for actually piping a soundtrack through the car’s stereo as the engine revs build, and now we see what happens when this feature isn’t included – it’s too quiet, and the idea that you’re driving a racy sports car isn’t communicated well to the driver. It’s still quick, easily a rival for the rear-wheel-drive Hyundai Genesis Coupe and much quicker than the Subaru BRZ, but the Mustang is more satisfying to drive. The Mustang driver doesn’t feel like he or she sacrificed too much in opting for the powerful EcoBoost turbo four, while the turbo Camaro driver questions whether maybe the raucous V-6 would have been a better idea.

Handling and ride quality still are strong suits for this base-model Camaro, with its conventional shock absorbers instead of the fancier Magnetic Ride Control that’s available on the SS V-8. The steering is communicative, with a direct feel and excellent feedback, while the presence of less mass up front versus the V-8 model gives it even better balance, with crisp turn-in to fast corners. The RS model I drove also had the Brembo brake package, with four-piston front calipers that felt firmer than those in Camaros I’ve driven previously.

You’ll get some benefit at the pump for opting for the base engine, with the Camaro turbo rated at 21/30/24 mpg city/highway/combined for the manual transmission, 22/31/25 mpg for the automatic. That represents a significant improvement over the 18/27/21 mpg for the V-6 manual, 19/28/23 mpg for the V-6 auto Camaro. It’s not as good as the Mustang EcoBoost, however, which rings in at 22/31/25 mpg for the manual, 21/32/25 for the automatic. The Dodge Challenger’s base V-6 can be had only with an eight-speed automatic, but those extra gears help it get 19/30/23 mpg, while the Hyundai Genesis Coupe with its 3.8-liter V-6 isn’t as good as any of them, rated at 17/24/19 mpg for the manual, 16/25/19 mpg for the automatic.
Interior
Inside, the base model Camaro suffers from a lack of soft materials, as we’ve noted in previous impressions of the V-6 model. While the rearrangement of the interior’s controls, dials and displays definitely has resulted in a cabin that’s more appealing, the atrocious outward visibility and lack of headroom crimp our enthusiasm for the car in any of its forms. The 1LT model gets standard power cloth seats, leather-wrapped steering wheel and shift knob, and not much else. Thankfully the interior  looks better in the jet black of this test vehicle than it did in the lighter gray of the V-6 model from our recent comparison test, but it still lacks the soft panels, splashes of color and nicer materials of the SS model.
Ergonomics & Electronics
The Camaro comes with a standard 7-inch touch-screen in the center console, angled strangely downward, an orientation that I assume helps reduce screen glare in the Camaro’s convertible versions. Apple CarPlay and Android Auto are included with that screen. They also now both are included with the available 8-inch MyLink multimedia system, and are a welcome addition – not that Chevrolet’s MyLink is bad. MyLink is well designed and now operates quickly and easily, but having the option of smartphone interfaces is a positive development. Originally, only CarPlay was available for the 8-inch system, but if you find an early 2016 model, Android Auto can be added via a dealer-performed software update. It should be noted that the Technology Package that gives you the bigger screen does not include navigation on the 1LT – for that, you have to bump up to the 2LT trim level, or rely on Apple CarPlay or Android Auto.

Most vehicle controls are easy to use and now feature some creativity, such as the climate controls integrated into the main vents. The only negative part of the Camaro’s controls is the location of the steering-wheel buttons for volume and track selection behind the spokes, which puts them below the 9 and 3 o’clock positions, awkward locations for your hands.
Cargo & Storage
The trunk space in the Camaro is laughable, especially considering its competition’s capabilities. Chevy gives you just 9.1 cubic feet of trunk space, but a tiny trunk opening means only small roll-aboard suitcases will fit. At least the volume is expandable thanks to folding rear seats. The Mustang also is small, but still bigger than the Camaro, with 13.5 cubic feet, while the Genesis isn’t much better than the Camaro, with 10.0 cubic feet. The big boy on the block is the Dodge Challenger, with its comparably enormous 16.2 cubic feet.
Safety
The Camaro has not been crash-tested as of publication. With the new platform come some new features, but many of the new electronic minders aren’t available on the lowly 1LT trim level. Blind spot warning and rear cross-traffic alert aren’t available unless you step up to the 2LT model and then opt for the Convenience and Lighting Package. There’s no adaptive cruise control, forward collision warning or automatic emergency braking. Aside from the airbags, a backup camera is the only other safety feature included at the 1LT trim level. See the standard features for yourself here.
Value in Its Class
Like the Mustang EcoBoost, the Camaro 1LT RS turbo is a smashing performance value. It starts at $26,695 including destination, and the RS Package adds $1,950 for 20-inch wheels, a unique grille and spoiler, bi-xenon headlights and LED taillights. The Technology Package is $800 and serves up the 8-inch touch-screen with a Bose audio system, Apple CarPlay and Android Auto. The $458 Heavy Duty Cooling and Brake Package brings Brembo brakes to the party, while another $100 paints those 20-inch aluminum wheels in gloss black. The total for this well-equipped machine comes to $30,030, which is a very reasonable price for all of the capability of the Camaro turbo.

The main competitor would seem to be the Ford Mustang EcoBoost, with its own four-cylinder turbo motor, but some might make the case that the base model Mustang V-6 is the more logical choice. Good luck finding that model anywhere other than a rental fleet, however, as Ford stocks three times as many EcoBoost and V-8 models on dealer lots. The EcoBoost engine is larger than the Camaro’s, a turbocharged 2.3-liter making 310 hp, with a starting price of $26,545. But add some performance goodies such as the $1,995 EcoBoost Performance Package and you’ll still be out the door for less than $29,000 with a quicker, tauter, more aggressive-feeling and sounding sports coupe, albeit with less electronics content than the Camaro.

The Dodge Challenger competes on price, starting at $27,990. It’s not nearly the athlete that the Camaro is, but it’s considerably more comfortable and has real room for four people and an enormous trunk. If you want something compact and sporty, but still rear-wheel drive and with room for four, the Hyundai Genesis Coupe is your only real option in this price class. Starting at $27,845, it features a much more powerful 3.8-liter V-6 and distinctive, if not exactly pretty, exterior styling. It hasn’t seen an update in a while, so it doesn’t feature the latest in multimedia technology or electronic safety systems. Compare all four competitors here.

Considering the turbo Camaro against the Mustang EcoBoost, Genesis or even the Subaru BRZ reveals the source of my dissatisfaction with the car – it’s not the Camaro’s performance that’s lacking, as it is genuinely quick, tossable and fun to drive. But the compromises one makes to buy a Camaro (terrible outward visibility, a lack of headroom, cramped backseat passenger space, very little usable cargo room) aren’t offset by the blinding speed, a ferocious engine soundtrack or incomparable track performance you get with the V-8 and even the V-6 models. It feels as if you’ve bought a Chevy Cruze that’s disguised itself as a Camaro, and that’s just not as satisfying.

September 3, 2022
By Ray Thomas from Boardman, Ohio
Owns this car

Very sporty with lots of power to prevent an accident from occurring. Good looking from the front view. The exterior design and interior design are excellent. The torch red color is eye catching!

Most reliable high performance vehicle I have ownd

This vehicle gives you great Perfotmance, really decent gas mileage and beautiful styling. Car ran 11.80 off the show room floor. I get 19 mpg in the city and 33 mpg on a HWY trip. Bought new for 43000. What a deal.

Just have to love the Camaro

This is my 4th Camaro and it’s the only vehicle I will ever drive anymore. The car is fun to drive, handles turns amazing and looks soooo nice! Camaro Girl for life!

Rating breakdown (out of 5):
3 people out of 5 found this review helpful. Did you?
Show full review
See all 148 consumer reviews 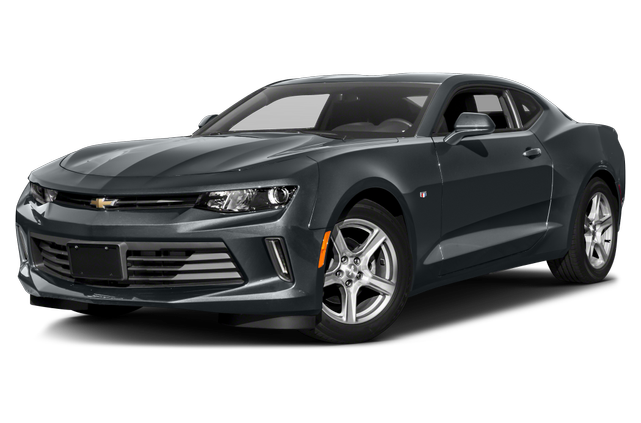 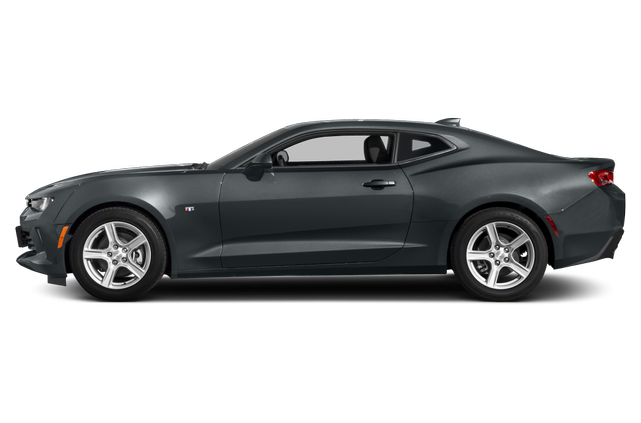 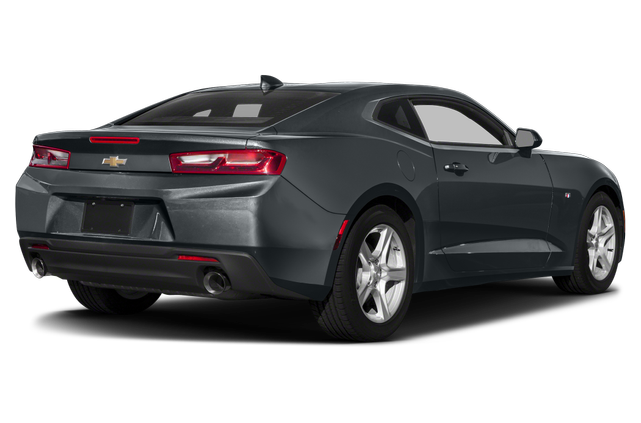 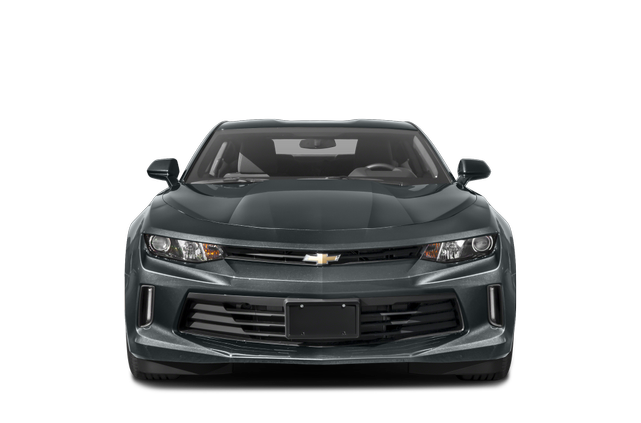 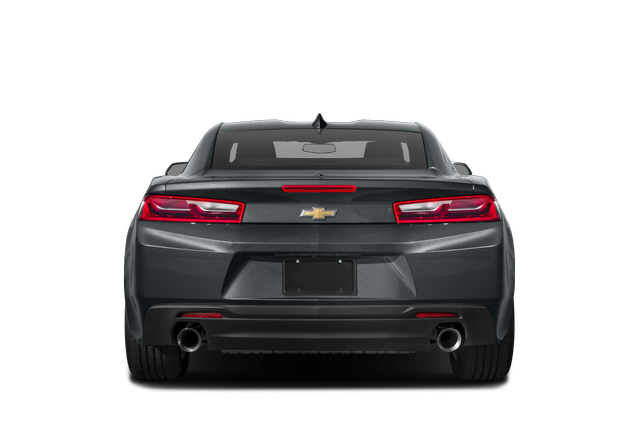 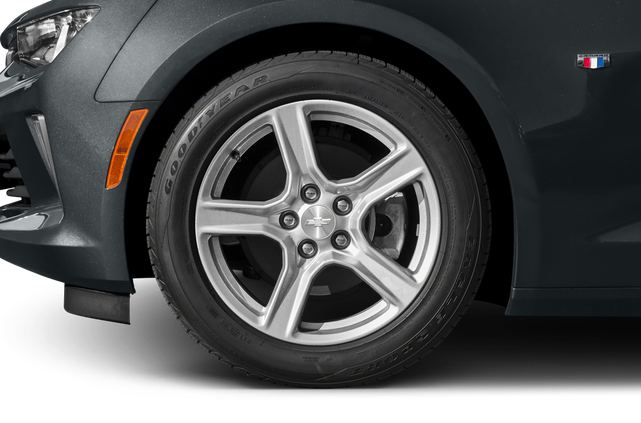 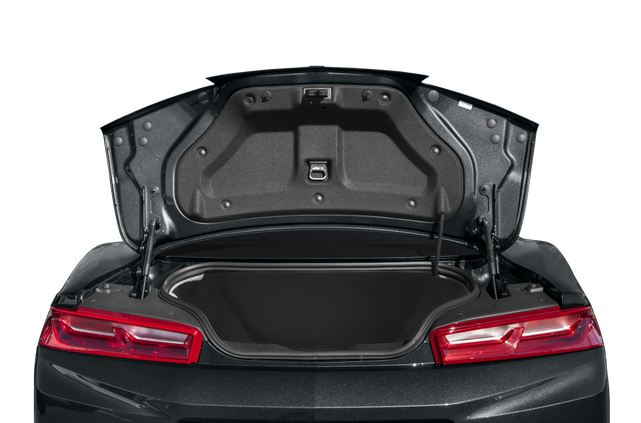 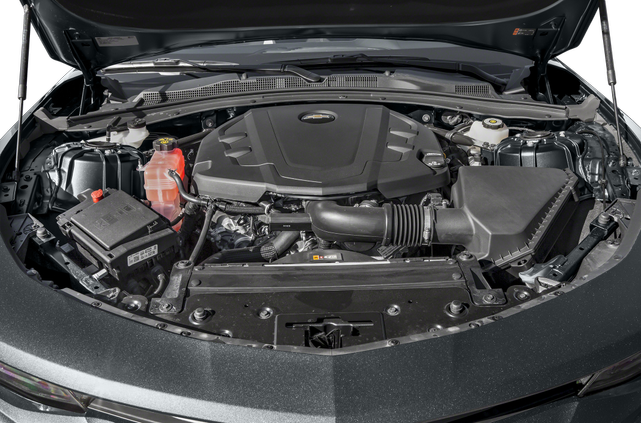 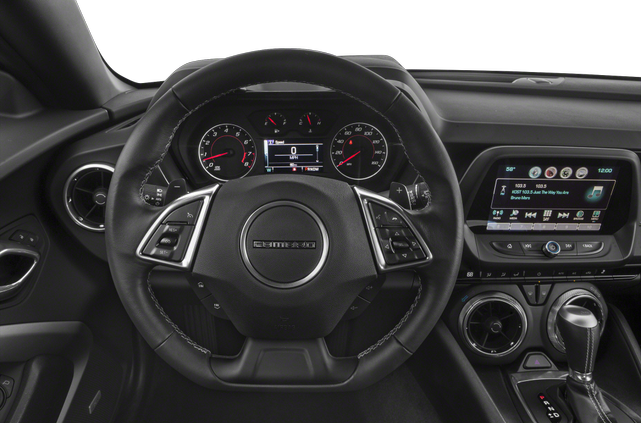 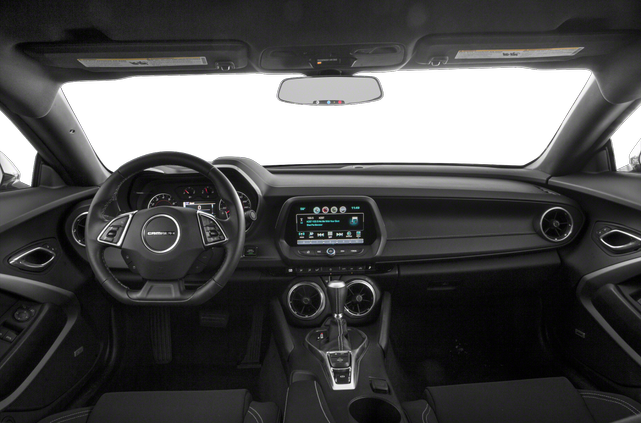 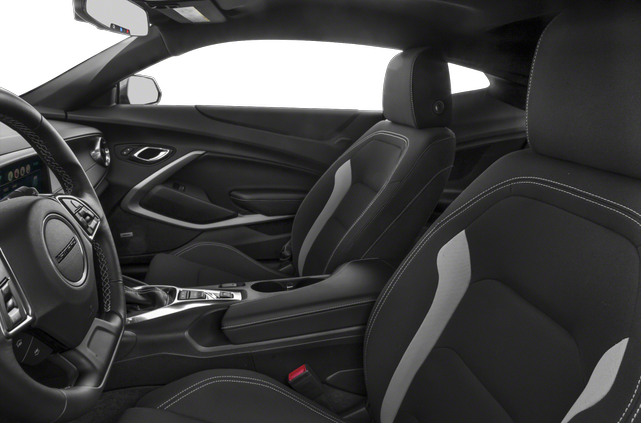 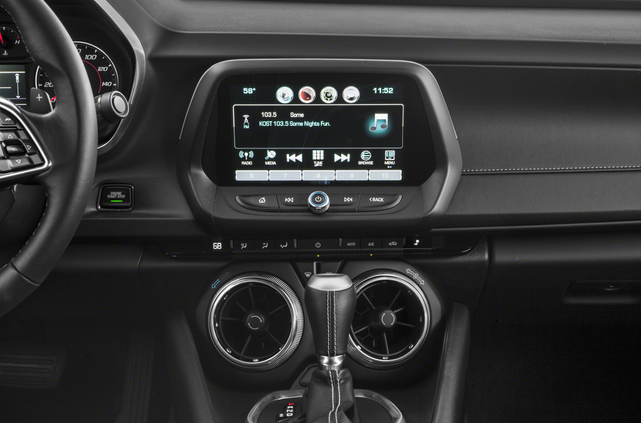 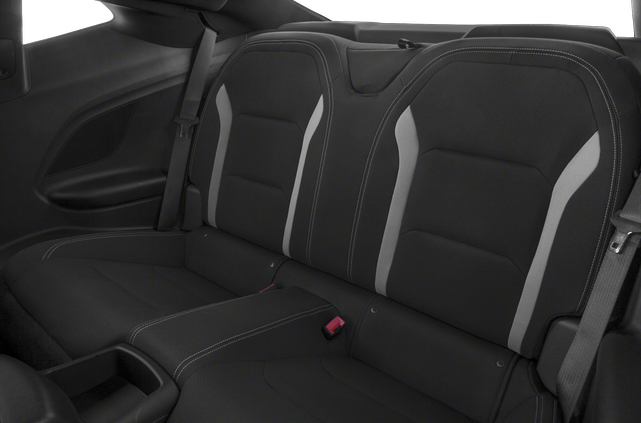 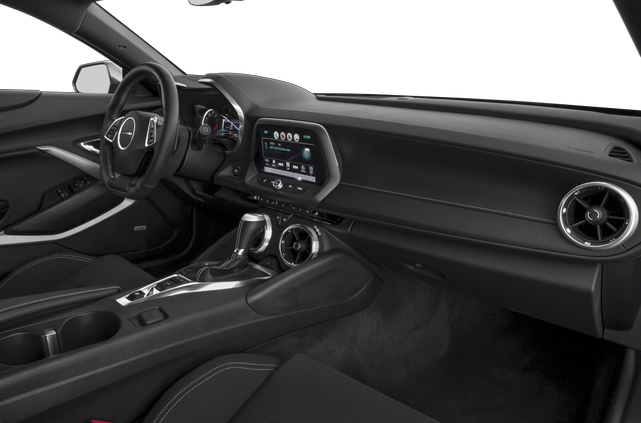 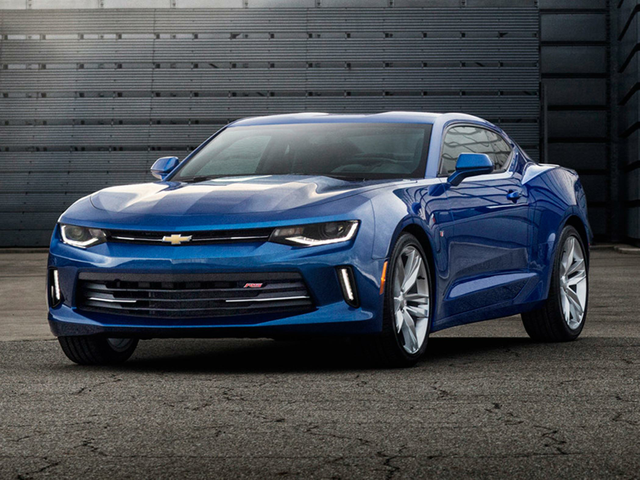 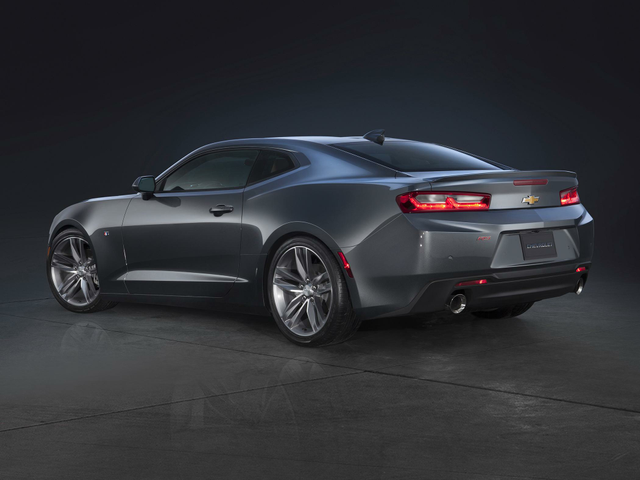 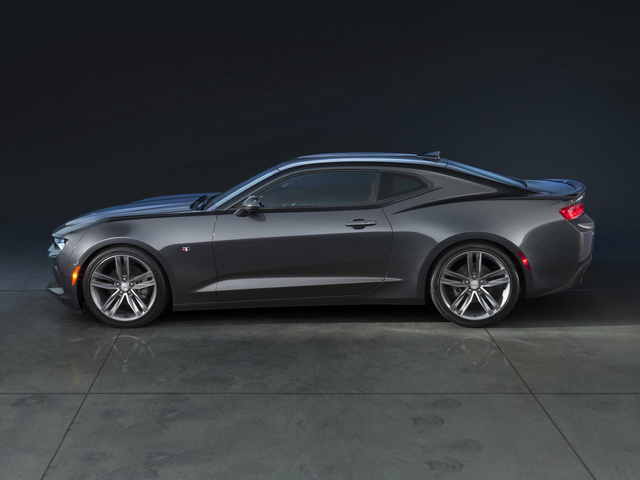 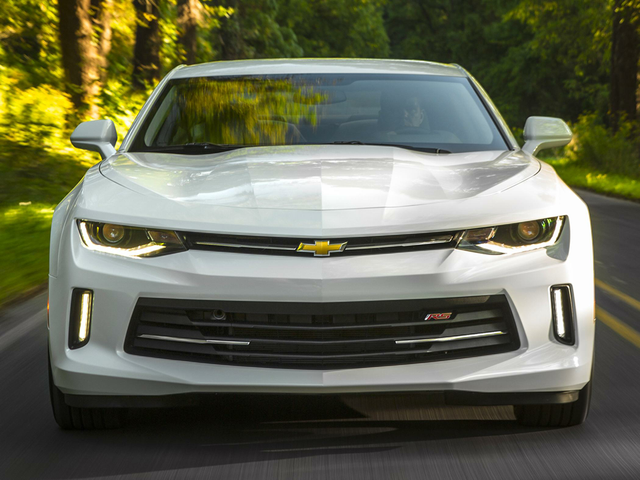 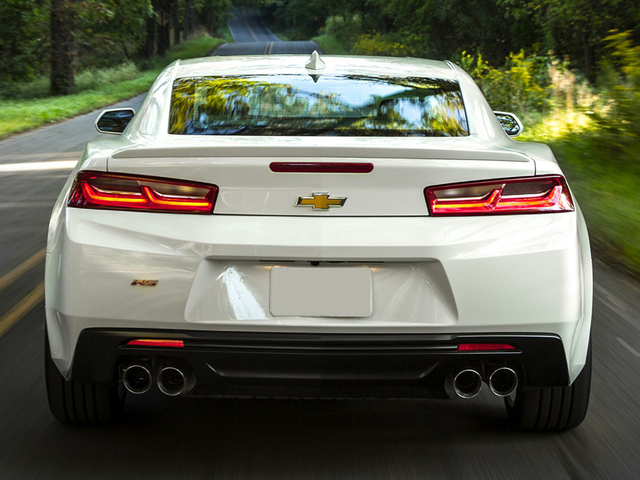 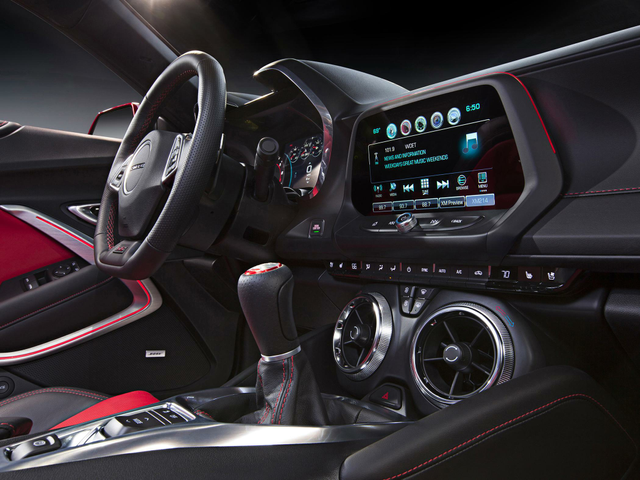