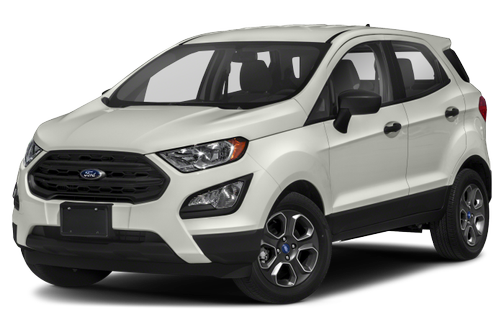 Our 2018 Ford EcoSport trim comparison will help you decide.

The verdict: At long last, the new EcoSport gives U.S. shoppers a subcompact Ford SUV, but its many drawbacks leave us questioning whether it was worth the wait.

Versus the competiton: The EcoSport feels like a bona fide SUV, not a jacked-up hatchback like some of its rivals, and Ford offers a first-rate multimedia system to boot. But as drivability and utility annoyances add up, its appeal is fleeting.

Its recent stateside debut notwithstanding, the Ford EcoSport is no spring chicken. The 2018 model represents a substantial update but not a full redesign of the nameplate’s second generation, sold internationally since mid-2012. The first generation dates back to 2003, and Ford calls it “echo sport” — a pronunciation I suspect most U.S. shoppers will abandon in favor of “eeko sport,” which keeps with the more-recent “eeko-boost” marketing of Ford’s turbocharged gas engines (EcoBoost). That’s all but assured on the front-wheel-drive EcoSport, which has an EcoBoost three-cylinder engine. “Echo” stands no chance.

Optional all-wheel drive pairs with a non-turbo four-cylinder. We tested both FWD Titanium and AWD SES models. Those are the two highest of four available trim levels, which you can compare here.

A tall, if stubby, profile gives the EcoSport a legitimate SUV likeness, something lacking in competitors like the Honda HR-V, Fiat 500X and Mazda CX-3, which all sit noticeably lower. It looks like a truncated Escape; it’s 16.8 inches shorter measured from bumper to bumper but only about an inch lower in height. That nails the ethos of a tiny-footprint SUV: still tall, just small.

The SUV vibe continues inside, where the EcoSport offers high seating positions front and back. Massive A-pillars pinch the forward sight lines, however, and the glass, though tall, is so far ahead of the driver’s seat that a hulking roofline cuts off traffic lights overhead. Flip-down rear head restraints aid the view out back, but the rear window is small even when unencumbered.

That’s just the beginning of the rear annoyances. Instead of a traditional liftgate, the EcoSport has a rear swing-gate. It’s a setup that requires some 4 feet of clearance behind the car to fully open — anathema to parallel parking and tight garage spots. Last I checked, such quarters are the norm for trendy urbanites who supposedly buy tiny SUVs. Instead of an exposed handle to open the swing gate, the release button sits inside a cutout in the passenger-side taillight, with a lip in the upper reflector that serves as a handle. It’s a novel idea … except the whole thing looks like a broken taillight from a distance. (Hey, now that’s urban.)

On front-drive models, the EcoSport’s 123-horsepower, turbocharged three-cylinder has some punchiness at higher revs and sufficient low-end torque to ratchet up speed if your right foot is patient, but one editor complained of excessive drivetrain lag from a stop. With more displacement but no turbo, the four-cylinder (166 hp) trades that punch for linearity. It’s a smoother trip up the tachometer, but it’s hardly a quick one. The midrange torque from the turbo three-cylinder is clearly missing, and the extra horsepower doesn’t make up for it — nor do the extra 250-280 pounds of curb weight (another roughly 9 percent) you get with AWD, which blunts any positive effect.

Both engines work with a six-speed automatic transmission that’s given to frequent multigear downshifts. What’s more, fuel efficiency isn’t great: EPA-estimated combined mileage for the EcoSport is 28 mpg with FWD and 25 mpg with AWD. That trails most major competitors, particularly if you want AWD.

Suspension tuning is comfortably soft in all but the EcoSport SES, which gets a sport-tuned suspension that’s noticeably firmer. Still, neither setup can mask the SUV’s tiny wheelbase — at 99.2 inches, it’s the shortest in the class — which plays havoc on rough roads. Encounter uneven pavement and the front suspension can scarcely begin to sort out what happened before the rear hits the same thing. Body motions go unchecked as the EcoSport teeter-totters its way out. Even among subcompact SUVs — a group of short-wheelbase cars prone to this problem — Ford’s contender is particularly unsorted.

Like the larger Escape, the EcoSport steers with a light touch, good feedback and quick turn-in. The nose reorients immediately to steering changes; after some initial lean, the chassis resists body roll admirably through sustained curves, though one editor said it felt overly tall and less confidence-inspiring than lower-slung models. Despite their emphasis on efficiency — which often comes at the expense of traction — the EcoSport’s Bridgestone Ecopia P205/50R17 tires exhibit good lateral grip. Alas, they can’t staunch wheelspin from the EcoSport’s lazy AWD system, where low-traction starts send the front tires squealing for grip before power finally shifts rearward.

Cabin quality is mixed. Materials are better than many in this class, with low-gloss padding on the dashboard and front and rear door armrests, but some models we tested had excessive shimmy in the center armrest and exposed insulation near the windshield. I’m also curious why Ford chose to invest in a padded dashboard but left the upper doors (where your arms and elbows end up) covered in hard shiny plastic, rather than the other way around. That said, most competitors cheap out in both areas.

Our test car’s six-way power driver’s seat had modest adjustment, but front passengers will appreciate the standard height adjustment for their side, too; that’s a provision lacking in too many cars that cost a lot more than the EcoSport. In back, a high seating position distinguishes Ford in a class where the norm is a low bench that elevates adults’ knees uncomfortably. Still, it isn’t exactly roomy back there: Knee clearance to the front seatbacks is modest, and installing rear-facing child-safety seats requires you to move the front seats far forward. (Parents should also note that the EcoSport’s buried Latch anchors are a bigger pain than a toddler up past their bedtime. Read more in our Car Seat Check.)

Base models have a 4.2-inch dashboard display with two USB ports and a soon-to-be-required backup camera. Higher trims upgrade to a 6.5- or 8-inch touchscreen, the latter with navigation. Both touchscreens have Apple CarPlay, Android Auto and intuitive physical controls. Titanium models get Bang & Olufsen premium audio.

From the dashboard to the center console, storage cubbies abound. No single cranny is huge, but the sum of them should accommodate your detritus. Cargo space behind the rear seat is 20.9 cubic feet, Ford says (about 40 percent less than in the Escape), but a movable floor partition allows you to maximize cargo height or create a load floor that’s continuous with the folded backseat — though the latter action requires an outdated tumble-and-fold process, initiated from the side doors, to get the seats all the way down.

Including destination, prices range from around $21,000 for a front-drive EcoSport S to $31,000 for a Titanium loaded with extras like a moonroof, heated leather seats, a heated steering wheel, single-zone automatic climate control, B&O audio and the 8-inch touchscreen. The EcoSport has yet to be crash-tested, and important safety technologies like forward collision warning, automatic emergency braking and lane departure warning aren’t available — a drawback common to the non-luxury subcompact SUV class a few years ago but less acceptable today.

The compromises inherent in subcompact SUVs make any similarly priced contender that’s a half-size larger a better all-around choice (think Nissan Rogue Sport or Subaru Crosstrek). The EcoSport brings fresh design and an intuitive multimedia system to the party, but it’s hard to justify otherwise. Shop it if you wish, but shop the others, too.

Excellent car I have owed.

This car has great comfortability and room, seats go down and easy to see and drive. Great color also. Good gas mileage also. Thank you Ford.

We have owned our ecosport se for over 2 years. No problems. Average over 32 over 37,000 miles tracked on fuelie! Only oil changes and tires rotations so far. Comfortable on trips. Love standard features on se trim. Proximity key. Heated seats. Satellite radio. 2 USB ports in dash. 2 power points. It could have a little more cargo room and power but we are satisfied with the car overall!

April 15, 2021
By Jackofall from NOVATO
Used to own this car

My car had brakes problems from day one. I took the car back at least 4 times they never could fine anything wrong. Two years into the car started have transmission issues. It is not worth the money I was paying.

Rating breakdown (out of 5):
0 people out of 0 found this review helpful. Did you?
Show full review
See all 200 consumer reviews

News
How Do Car Seats Fit in a 2019 Ford EcoSport?

All model years for the Ford EcoSport