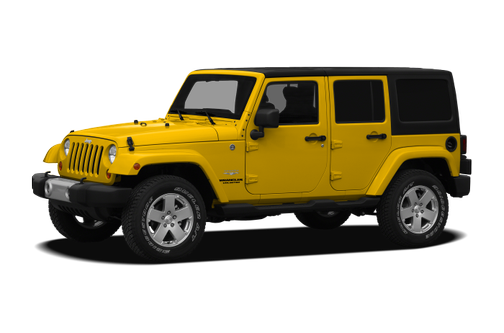 Our 2011 Jeep Wrangler Unlimited trim comparison will help you decide.

I’ve long thought that if a car enthusiast fell into a coma, say, 60 years ago and just awoke, he or she might recognize only two vehicles: The Porsche 911, and the Jeep Wrangler. Sure, both those models have undergone extensive and dramatic updates, but they still retain the general appearance, and certainly serve the same audience, as they have for decades.

The original Jeep evolved into the CJ-5, then the longer CJ-7, then became the Wrangler. In 2004, Jeep made one of the biggest changes in the vehicle’s history – it added a lengthened four-door model called the Unlimited. Jeeps have long be available with a rear seat, but some gymnastics were required to climb back there, and riding in the back wasn’t much better than walking. With the Unlimited, no one would confuse the rear-seat accomodations with a luxury car, but it’s comfortable for two adults, passable for three.

Jeep still, of course, offers the regular Wrangler, at a starting price of just over $22,000, or $23,885 with air conditioning, Sirius satellite radio and shipping. The Wrangler Unlimited starts at $25,545, and the price rises quickly as options are added. The test Unlimited was the Saraha model, which started at $29,945, and ended up at $35,305 with shipping and options that ranged from a touch-screen navigation system to remote starting.

About that remote starting: To crank the engine, press the top button on the key fob twice. For plenty of vehicles, this top spot is the lock-unlock button, and walking away from the Wrangler Unlimited in the dark, I accidentally started it. It only happened once, but I’d still prefer the remote start feature be a little more difficult to engage.

Even at over $35,000, our Sahara isn’t the most expensive Wrangler Unlimited – that would be the Rubicon model, which has a few more sophisticated off-road components than the other models. Unless you are a dedicated off-roader, you won’t care. The test Sahara, with its old-school but dependable manual four-wheel-drive, high-low activation, is as good as anything you can buy off-road. Well, not quite as good as a regular Wrangler; the Unlimited is more than 20 inches longer, so it isn’t as nimble on tight, winding trails.

That extra length and weight – about 300 pounds’ worth – makes a huge and very positive difference on the road. The regular Wrangler’s ride is abrupt and choppy on rough roads, but the Unlimited smooths out the pavement and makes genuine long-distance travel effortless. There’s also a generaous 43 cubic feet of space behind the rear seats, compared to 17.5 cubic feet for the regular Wrangler. Handling on the highway is quite good, due in part to the big 18-inch Bridgestone radials mounted on handsome five-spoke alloy wheels.

Inside, the Unlimited gets a handsome, and long overdue, interior redesign for 2011. It’s still traditional and functional, but it’s much more accommodating. The test Sahara had the complex, multi-part removable hardtop, which, when in place, makes the ride quiet and cool – soft tops do little to keep sound out, and air-conditioned air in. But plenty of dedicated Jeepsters want the open-air option, and for them, the soft top makes more sense, and it’s cheaper. Even with the hardtop, though, there’s some road noise from the tires, and some wind noise. Jeep engineers are proud to point out the Wrangler’s aerodynamic improvements, but let’s face it: With that grille and upright windshield, aerodynamices are closer to a cracker box than a Dodge Viper.

All Wranglers have the capable but unremarkable 3.8-liter, 202-horsepower V-6 under the hood, with your choice of a six-speed manual or, as in the test Sahara, a four-speed automatic transmission, which adds a bargain $825 to the price. Regardless of the model or the transmission, all Wranglers are EPA-rated at 15 mpg city, 19 mpg highway on regular gas. The V-6 engine is a little noisy but adequate, and the four-speed automatic transmission works hard to maximize its power. Still, another gear would be nice – almost all vehicles have at least a five-speed automatic.

The test Sahara, painted an appropriate “Sahara tan,” was one of the best-looking Jeeps I’ve seen, inside and out. It isn’t cheap, but Jeeps have stellar resale value. Like all Jeep Wranglers before it, the Unlimited Sahara has personality, but it’s a pleasant one I could live with every day.

In a nutshell: Jeep brings the Wrangler into the, um, 20th century.

This vehicle will always be available. I’ve had 3 other vehicles that came and gone, and the Jeep is still here with 140k. I guess I’m a Jeep Geek

I love my Jeep! When they say go anywhere...they mean it... I highly recommend buying one if you want a fun vehicle! This vehicle is so much fun and met all of my expectations.

One of the nicest vehicles I HAVE OWNED

Can't buy one this well maintained with these upgrades for this price new. Runs like new, Updated Navigation, Never Beat on. Great all around vehicle. Have had many compliments on this jeep, wherever I go.

Rating breakdown (out of 5):
0 people out of 0 found this review helpful. Did you?
Show full review
See all 77 consumer reviews

All model years for the Jeep Wrangler Unlimited