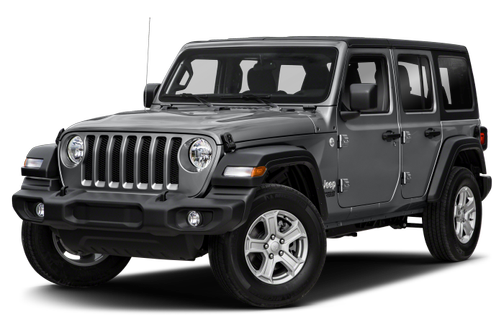 Our 2018 Jeep Wrangler Unlimited trim comparison will help you decide.


After years of waiting, spy photos galore, leaked documents and owners manuals appearing online, Jeep has finally lifted the veil on the all-new 2018 Jeep Wrangler. This is the "JL" in Wrangler-speak, as opposed to the previous "JK" version.


The new Wrangler will be arriving in dealerships in a matter of weeks, but beware: While Jeep is labeling this a 2018 model, they'll still be selling the old JK model alongside it — also as a 2018.


Like before, there's a two-door version and the Unlimited four-door version. Like before, the top and doors are all removable, and the windshield folds flat against the hood. But while the Wrangler may look the same, Jeep has gone over every system in the thing with an eye toward addressing customer concerns.

Exterior
From the outside, the changes from JK to JL Wrangler are subtle, indeed. It’s slightly longer and the hood is more level, as well. The grille is slightly reshaped, and the Jeep logo has been moved from the grille to the side of the front fenders — “Where God intended it to be,” according to Jeep Chief Designer Mark Allen.

LED headlights are optional, as are LED taillights. The fenders are higher and reshaped, and can accommodate a 33-inch tire without any modification (or a 35-inch tire with a 2-inch lift kit). There’s more window glass, as well, and the rake of the windshield is slightly greater.

Along the side, the doors still have exposed external hinges, but the doors themselves now open on struts and no longer swing free. But don’t fret: Removing the doors is only slightly more complicated, with the user now needing to unbolt the strut as well as the two hinge pins. Lifting the doors off should be easier, too — they’re aluminum and weigh considerably less than the outgoing model’s doors, and the interior of the door panel is designed to allow someone to easily grip and carry the doors around.

The windshield folds flat by simply unscrewing four bolts at the top of the windshield panel. The rearview mirror and sun visors are now mounted to the Wrangler’s frame, meaning they stay in place when you lower the windshield. It takes 28 bolts and an hour to drop the windshield on a JK Wrangler. The new design is a massive improvement — just make sure you bring some goggles or big sunglasses to avoid debris in your eyes while in motion.

Out back, the tailgate and rear window are wider, and the windshield wiper on the hardtop is now integrated into the lower part of the tailgate instead of on the window itself, improving rear visibility. But perhaps the biggest exterior difference is one that’s going to make a serious change in how people use their Wrangler.

The tops are all new, totally redesigned — and none of them use zippers. There are three tops available: the standard Freedom Top hardtop, which no longer uses those difficult-to-twist manual fastener screws; a full Sunrider soft top (available in black or tan); and a new Sky One-Touch power top that features a panoramic roll-back top and removable rigid side panels.

Unlike the soft top and Freedom Top, the Sky One-Touch power top is not meant to be completely removable without a lot of work and several tools. But that’s OK; you can still get the totally topless experience with either of the other two tops. The soft top uses a system of sliding rubber tracks and gaskets instead of zippers, eliminating one of the biggest obstacles owners face in raising or lowering a top quickly.

Interior
The Wrangler’s cabin gets a full redo, as well, with better sightlines and more attention to comfort. A new horizontal instrument panel is up front, and it takes inspiration from the round dials of the CJ-5 and the long row of gauges on the YJ. Front seats are still in the same position, but visibility is improved thanks to taller glass all around.

Many of the instrument panel’s surfaces are rubberized now, especially the touch points around the stereo. Grab handles have moved from the dash to the A-pillars, and new premium trim options bring leather wrapping to the dash for the first time. The door panels also get some attention, with longer armrests for improved comfort. The center locking console is also 50 percent bigger and contains a USB port.

Backseat comfort is addressed with 1.1 inches more rear legroom in the Unlimited, a benefit of the new JL’s longer wheelbase. Seatback recline has also been improved, while two USB ports and climate-control vents keep passengers mollified. A new cupholder armrest has also been added to the Unlimited’s backseat. In the two-door Wrangler, the backseat features integrated head restraints now that fold down for stowage and better rear visibility when not in use.

The interior electronics have gotten a complete overhaul, as well. Three multimedia-screen options are available: a 5.0-, 7.0- or 8.4-inch touchscreen that features Apple CarPlay and Android Auto, as well as a pinch-to-zoom feature. Fiat Chrysler Automobiles’ latest Uconnect adorns the dash, complete with the Off Road Pages function that has previously been seen on other Jeep models.

A new gauge cluster features an optional 7-inch reconfigurable digital display, including a dedicated transfer-case display to tell you what mode you’re in. A new feature for 2018: Four optional auxiliary switches can be had low on the center console, programmable buttons that can be used to wire up accessories like a winch, external lights or a CB radio quickly and easily, and without the need to drill into the vehicle’s panels.

Under the Hood
Powering the Wrangler is a familiar motor — the 3.6-liter Pentastar V-6 carries over unchanged, still making 285 horsepower and 260 pounds-feet of torque. It’s joined by a new premium option, however, in a turbocharged 2.0-liter four-cylinder engine that Jeep has adapted for use from an Alfa Romeo program. It makes 270 hp and 295 pounds-feet of torque, and it’s technically a mild hybrid system in that it uses a small electric motor to engage stop-start and add a little initial torque to the system when you start moving.

A 3.0-liter turbo-diesel engine is coming for the Unlimited model only, making 260 hp and a whopping 442 pounds-feet of torque, but it won’t arrive until the 2019 model year. The V-6 is mated to either a standard six-speed manual transmission or a new eight-speed automatic, while the turbo four-cylinder and diesel are automatic only.

It will behave like a traditional “set-it-and-forget-it” all-wheel-drive system, transferring torque to wheels that need it most. The crawl ratio has been improved in low range, as well, now looking at an 84.2:1 ratio for a Rubicon with a manual transmission and 77.2:1 for automatic-equipped Rubicons. The standard axles will be the next-generation Dana units, while the Rubicon gets beefier heavy-duty Dana 44 axles with electronic locking front and rear differentials, as before.

The chassis and structure have been updated significantly, partly for weight savings, partly for aerodynamics and efficiency. In addition to the aforementioned aluminum doors, the tailgate is also now a combination of aluminum outer skin with magnesium inner. Between the frame optimization and new lightweight materials, the Wrangler has dropped about 200 pounds, according to Jeep. Tow ratings remain 3,500 pounds maximum for the four-door and 2,000 pounds for the two-door.

Safety
The Wrangler has always been a bit of a throwback, and this isn’t changing too much with the new model. You only get four airbags (side-impact front-seat airbags are now standard), with no overhead bags. A host of new safety features are available however, including optional blind spot monitoring, rear cross-traffic detection and a standard backup camera with dynamic guide lines. Forward emergency braking will become available later in the model year, according to Jeep.

Not cheap but cheerful

March 25, 2021
By Smiles from Honolulu Hawaii
Owns this car

I have the soft top and it’s much improved over the last one. 4 cly engine sounds terrible but is very peppy and great on gas. I have rust showing up on the bottom of the doors which is alarming on a 3 year old car.

This is the best Jeep Wrangler model ever made. The past YJ, TJ, JK models are great, but this Jeep JL 2018 Wrangler Sahara Automatic V6 is the best one yet. The comfort and modern amenities are top of the line. The 8” infotainment head unit and Alpine sound system is out of this world. The interior fits my family of four and has enough cargo space for a stroller, scooter, Onewheel XR and beach chairs. The exterior needs no introduction with its iconic round headlights and seven slot grill. Followed by a three piece removable top, which I managed to take off and put back on by myself. FYI, don’t try doing this by yourself. My final favorite thing about my Jeep JL is the ability to customize the Jeep with all of the amazing aftermarket parts and pieces. This allows you to take the best looking car on the road and make it your own.

February 2, 2021
By Gidget’s Jeep from Bristol, Tennessee
Owns this car

My second Jeep Wrangler from the same dealership love this vehicle. Will probably buy my third Jeep from this same dealership. The staff was great to work with at the time of purchase

Rating breakdown (out of 5):
0 people out of 0 found this review helpful. Did you?
Show full review
See all 208 consumer reviews

All model years for the Jeep Wrangler Unlimited