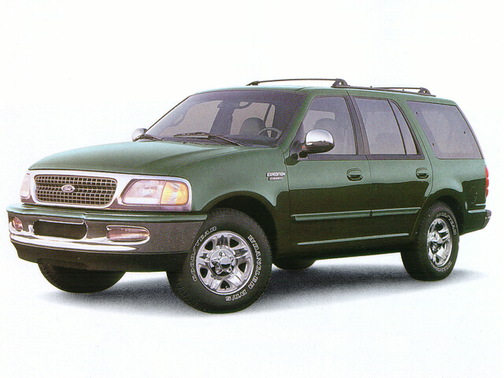 Our 1997 Ford Expedition trim comparison will help you decide.

By dimensions and purpose, the 1997 Ford Expedition falls somewhere between affordable housing and the next Trailways bus to Yuma.

Let’s bring perspective to the incredible bulk of this sumo-utility: It weighs close to 3 tons, which is about the same as a medium bull elephant or four beached baby whales. Or three Toyota Tercels. It has seats for nine adults, and that’s one guy shy of two Laker lineups.

At 6 feet, 5 inches, the Expedition is taller than Pete Sampras; at 17 feet, it’s long enough to overlap parking meters. One Expedition can tow a Range Rover as a spare. With rear seats folded, there’s sufficient cargo room for a lounge act.

As impractical as all this girth and tonnage appear, American buyers have been showing significant interest in jumbo sport utilitiessince the 1950s. In the late ’60s, Chevrolet welded a station wagon body to a truck frame and called it a Suburban, because it took up more room than most suburbs.

The intent of such monsters today is not simply to be bigger, sportier and more utilitarian than sport utilities. Nor are manufacturers guilty of pandering to faux outdoorspersons who might want to look rougher, tougher and ride taller than the urban cowboy next door.

No. The aim was to carry this full-size segment to the ultimate with purpose-built vehicles whose major purpose would be to hold enough gear for a Boy Scout jamboree, tow the heaviest boats and Airstreams trailer laws allow, and haul enough horses for Clint Eastwood’s next western.

Somebody must have been thinking sagely, because annual sales of big and bigger are climbing above 300,000, and that’s expected to double in the next three years.

Hence Ford’s Expedition–a new bruiser serving unmistakable notice that it’s time for GM’s aging Suburban, and the younger Tahoes and Yukons, to move aside and let a wider, taller, more sophisticated vehicle in the game.

And as a 47-journalist jury has already named Expedition North America’s Truck of the Year–beating out six comers, with Dodge Dakota and Toyota RAV4 the closest finalists–it seems likely Ford’s entry is poised to whip through the competition like Indiana Jones.

Built to replace the Bronco, and based on the platform and powertrain of Ford’s F-150 pickup, this is a huge vehicle of small miracles. It handles no floppier than a Ford Explorer.

There is absolutely no sense of driving something large enough to fill the public transportation needs of small towns. And thanks to a choice of two V-8s–a standard 4.6-liter producing 215 horsepower and a lustier 5.4-liter pumping out 230 horsepower–an Expedition is not only capable of getting out of its own way, but it posts performance numbers close to those of a mid-size sedan.

Oh, there are downsides. Drive an Expedition into the garage of an older tract home and its butt will be bare to passing birds. It’s a thirsty rascal that motors only 13 city miles on a gallon of 87 octane. And with a 30-gallontank, that translates to about $40 a fill-up.

Standing almost 9 inches off the ground, plus the width of the threshold, getting in and out–despite optional running boards–is a clamber and a tumble. The vertically challenged may consider buying ropes, carabiners and pitons.

The rear lift gate definitely is built for those with big, leathery paws and the upper-body strength of a lowland gorilla. And when King Kong is done with the rear door, ask for his help in removing the optional rear bench, which weighs 72 pounds and has about the same cuss factor as wrestling a large sofa intoa small apartment.

Still, the Expedition wasn’t designed to be all things to the broadest range of users. There are shorter, lighter, more manageable Grand Cherokees and Isuzu Rodeos for small families who camp, commute, ski, carry a fortnight’s groceries and take the dog to Francile’s. Also a vast crop of friendlier, le s expensive vans for those who car pool, spend weekends at Home Depot and transport flurries of fourth-graders to school.

The Expedition was built as an XXL hod on wheels for Alaska, Texas, Montana and similar Marlboro countries. It offers 118 cubic feet of cargo space, or five times the trunk space of a Buick Regal. The payload is 2,000 pounds, and that is close competition for full-size trucks. With a towing capacity of 8,000 pounds, it will out-pull everything but the slower, heavier, torquier, heavier-horsepowered Chevy Suburban.

And it plays well off-road, thanks to Control Trac with settings aimed at all surfaces and weathers. Controlled by a dashboard-mounted rotary switch, there’s rear-wheel drive in high for standard work; all-wheel drive with traction taming for when the Ventura Freeway has flooded its verges; and locked, four-wheeldrive, with low-gear modes tough enough to tug Dodger Stadium back to Brooklyn.

Yet, in addition to being a loyal and hard worker, the Expedition offers surprising levels of refinement, drivability and creature comforts. There’s leather armchair seating, front and rear heating and air-conditioning, an audiophile’s sound system with rear-seat controls, and a battery saver that turns off forgotten electric systems–say, cargo lamps or interior lights–40 minutes after the ignition has been shut down.

Expedition pricing, equipment and model range is aimed at all purposes and pockets. Two-wheel drivers with fabric upholstery and the smaller engine start at $28,000. Then, by leaps and bounds, engine size and optional luxuries, the sticker bloats to $40,000 for a 4WD Eddie Bauer model with everything but Eddie himself managing the roadside assistance program.

We found only two areas of absolute dislike. At really low speeds, the speed-sensitive steering is oversensitive and handling becomes an unfeeling waffle. And a handsome front end is marred by a styling crease that runs the width of the grille and looks like your first parking ding.

If there are facets we truly adore, they center on the Expedition’s poise and personality. It’s built like a brick condo, but handling is soft and effortless. Despite its bulk, it doesn’t have the visuals or presences of a bulk mobile.

The Good: A hulking hogan on wheels, huge and capable, yet very sophisticated for its size. Carries, tows and traverses beyond levels set by most of the competition.

The Bad: Pray there isn’t another gas drought. Speed-sensitive steering too sensitive at slow speeds. Lift gate brings out clumsiness in anyone.

The Ugly: Styling groove across grille.

This car has been a great car since I bought it new in 1997. Runs great, easy to drive, work horse, tows boats and trailers easily

The hours I work I needed to have something that I could rely on to start and get me to n from work safely. In all kinds of weather. This has been one of the best vehicles I have owned. It has lots of power behind it as it is a V8. Sad to see it go.

it’s the most reliable suv i know

it’s a good old suv. it’s been in the back yard for 4-5 years. we’ve just put in all 8 new spark plugs but there was still more problems to the suv so we brought brand new fuel pump, gas filter, and a brand new battery and that got the expedition running like a champ! 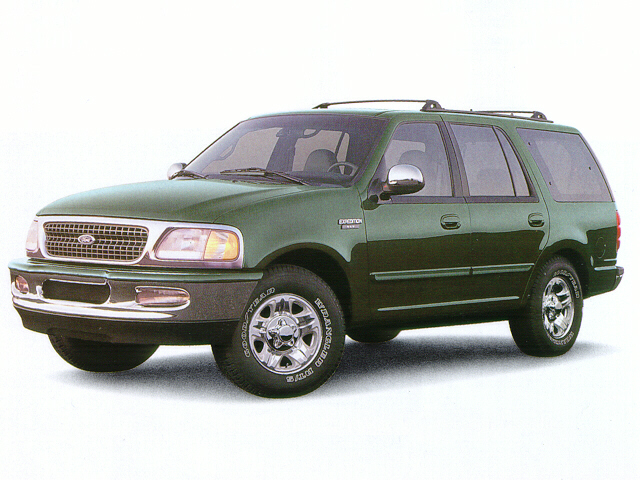 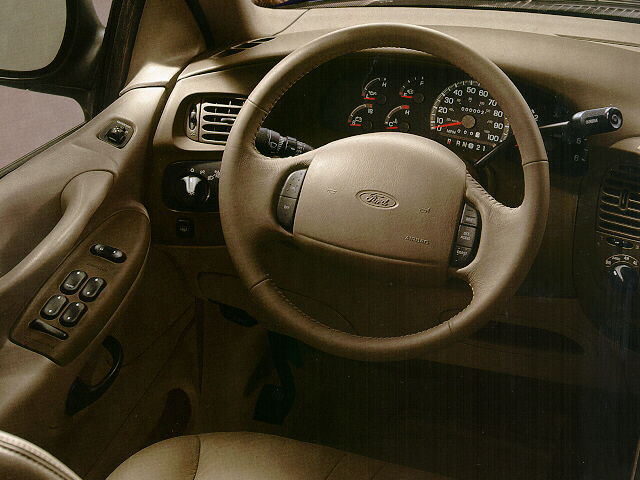