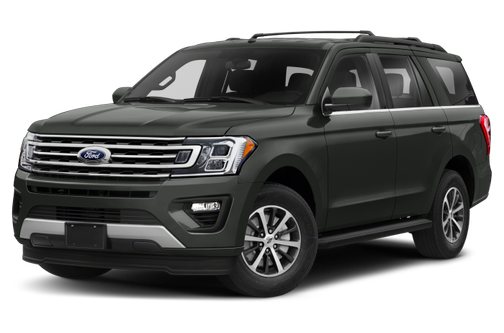 Our 2018 Ford Expedition trim comparison will help you decide.

The verdict: Big, bold and fully updated, the Expedition has the goods to take the sales crown away from the Chevrolet Tahoe.

Versus the competiton: It may not have a V-8, but you won’t miss the two extra cylinders; it has plenty of power and more usable space and useful technology than any other SUV in the class.

Just as minivans replaced the family station wagon in the 1980s, so too did big SUVs vanquish those vans in the 1990s. Since then, however, the Great Recession and occasional gas price shocks have returned the largest SUVs to their original role in the market: expensive vehicles bought by people who need big, multi-passenger vehicles that can tow a lot of weight. The segment leaders are the Chevrolet Tahoe and its longer sibling, the Suburban, and it isn’t hard to figure out why: Their main competitor, the Ford Expedition, hadn’t seen a major update in almost a decade.

Now all that has changed. Behold the behemoth: an all-new 2018 Ford Expedition that aims to knock the Chevy off its top-truck throne — as it did in our Full-Size SUV Challenge.

Like the old Expedition, the new one maintains traditional, trucklike body-on-frame construction. Under the skin, the Expedition is an F-150 enhanced with an independent rear suspension instead of a solid live axle. This arrangement also allows for a lower load floor in the cargo area, enabling the third row to fold away completely — an advantage over the Chevy Tahoe’s seats, which fold flat but not into the floor. The Tahoe’s raised floor eats into cargo space and makes it more difficult to load objects.

Like the F-150, the Expedition’s body is now aluminum, but the weight difference for 2018 isn’t that significant — just a 119-pound decrease for the base trim versus a comparable 2017 Expedition. Ford added all kinds of equipment and sound insulation that serve to offset some of the benefit of lightweight aluminum. The body looks slick, with a new and thoroughly modern appearance that’s much more in keeping with the modern style of truck: high beltline, smaller windows and chunkier style. It’s fresh, attractive and has a distinctly more aerodynamic look than the outgoing model.

The Expedition comes in two lengths: Expedition and Expedition Max (formerly Expedition EL). The extra room doesn’t do anything for passenger space, but it does increase the cargo area behind the third row, so you’re not forced to choose between extra rear passengers and extra luggage capacity. My primary test vehicle was a regular-length Expedition, though Cars.com editors have also driven the Max.

Powering the new Expedition is Ford’s ubiquitous twin-turbocharged 3.5-liter EcoBoost V-6, a carryover engine. It puts out a healthy 375 horsepower in most trim levels and 400 hp in the top Platinum. New to the setup is a standard 10-speed automatic transmission — available with either rear- or all-wheel drive — and an electronic limited-slip differential.

Fire up the V-6 and it sounds like a well-tuned turbo-diesel. Some of the engine’s noise is artificially generated through the stereo (all that soundproofing would prevent you from hearing the engine otherwise), but the sound that does come through is a fun mix of whooshing turbos and raspy exhaust. It sounds sufficiently butch for the truck it powers.

I found driving it to be quite a pleasant surprise, as well — the V-6 more than adequately powers the Expedition in both regular and Max versions, and it gets even punchier when you twist the rotary drive mode selector into Sport. Climbing the canyons above Malibu, Calif., handling the tight, twisting sweepers, descending into quick switchbacks — the Expedition exudes confidence and stability. Sport mode tightens up steering feedback and changes both accelerator sensitivity and transmission shift points, making those twisties even easier to take. Nobody will confuse the Expedition for a Mustang, but it by no means embarrasses itself on high-speed, challenging roads.

Ride quality is also outstanding. Wheel sizes vary from 18 to 22 inches depending on trim level and equipment. Higher-spec trims get an electronically adjustable suspension, but lesser models’ suspensions provide a smooth, well-controlled ride, as well; there are no crazy, tippy body motions. If you need an off-road rig, Ford’s got you covered there, too: An FX4 package is available that brings underbody protection, a low-range transfer case, special tuning for the electronic limited-slip differential, Michelin Primacy tires on smaller wheels, off-road shocks, a heavy-duty radiator and unique badging.

Hooked up to a 5,500-pound camper, my Expedition towed like a champ, chugging up 6 percent inclines with ease, accelerating despite the load it hauled. The 10-speed automatic is well-matched to the engine, holding gears on downhill grades to save the Expedition’s brakes and maintain easy control. The instrument panel also shows you tons of information, such as which gear the transmission’s in at any given time.

Trailer sway control comes with a heavy-duty towing package, as does Ford’s super-nifty Pro Trailer Backup Assist feature, which allows you to back up a trailer using a dedicated rotary knob on the dash and backup cameras. It takes the guesswork and trial and error out of backing up a trailer, making even the newest novice look like a veteran trucker.

Where the Expedition falls short is in fuel economy, especially when towing. It also features a smaller gas tank than its main competition, meaning its overall range is notably shorter. The regular Expedition is EPA-rated at 17/24/20 mpg city/highway/combined with two-wheel drive, 17/22/19 mpg with four-wheel drive. The longer Expedition Max clocks in at 17/23/19 mpg with 2WD, 16/21/18 mpg with 4WD. In a recent real-world test for the Full-Size SUV Challenge, my Expedition 4WD achieved 21.5 mpg in combined driving, better than its 19 mpg rating. But that number dropped dramatically to 10.2 mpg when towing a camper — a steeper loss than the V-8-powered competitors in our Challenge exhibited, though still not the lowest mpg. Turns out that the twin-turbocharged engines positively suck down the petrol when you put the engine under some serious load, as I did up and down the hills of eastern Arizona. Combine that with the smaller gas tank, and you’ll be making frequent pit stops if you’re towing a trailer cross-country.

Better Inside, But Details Are Important

The interior looks as if it could have been lifted directly from the F-150, with all the pros and cons that entails. It’s spacious, with excellent outward visibility, but the front seats feel unsupportive over longer voyages. One of our taller reviewers could not get comfortable, with his legs always at an angle and most of his thighs unsupported by the oddly short bottom cushions. The backseats are high, with plenty of room, and the ability to slide fore and aft means passengers in the two rear rows can negotiate legroom amongst themselves. The third row is usable for adults even when the second row is adjusted all the way rearward; slide it forward a bit and there really isn’t a bad seat in the house. The second row also tilts and slides forward at the touch of a button, making ingress to the third row easier.

Materials quality in the cabin is mixed. The F-150 isn’t known for having the best environment in its own class; it features plenty of hard plastic and seams between parts that simply don’t flow together well. Some of this, like plastic molding seams on the grab handles, can be chalked up to early build quality, but some of it is simply how it’s designed — it’s a pickup truck that’s been given a healthy makeover, but it’s still a pickup truck in the ways that count. For a vehicle that can easily approach $90,000 in fully loaded Platinum trim and even top $70,000 for a well-equipped Limited model, this kind of detail is important. All the fancy quilted leather in the world doesn’t excuse the fact that other parts look cheap.

Thankfully, Ford loads you up with tech goodies for that kind of coin, including gadgets that entertain (you can stream live TV to the entertainment system via Slingplayer and Sync 3, or even hook up a big-screen TV for tailgating), some that keep you safe (all kinds of lane-keeping aids, steering aids, anti-collision aids and autonomous braking systems), and some that help you drive (like the aforementioned trailer backup assist). The high-end audio system is by the new B&O Play brand, a division of Bang & Olufsen, and it sounds fantastic.

The entire experience in the Expedition is one of a significant upgrade, easily on par with the Chevy and GMC models on many levels and surpassing them in flexibility, spaciousness and amenities.

All This Utility Does Not Come Cheap

If you haven’t priced out a full-size SUV in awhile, you’d better sit down for this next part. The starting price for an Expedition XL 4×2 is $49,290 including destination charges, but you’ll never see that price on a dealer lot — they’re meant for fleet sales to utilities or city governments.

Far more likely to be found is an XLT trim, which starts at $52,985 with two-wheel drive. Specifying four-wheel drive adds between $3,000 and $3,200 to the price depending on trim level. Add in everything you can get and you’re looking at an Expedition Max Platinum 4×4 that will stop just short of 85 grand.

My regular-length Limited 4×4 model stickered at $72,655 including destination, and that included several popular equipment packages and leather for the first and second rows. For comparison’s sake, the new 2018 Lincoln Navigator starts around $73,000 and can top out around $100,000.

Still, the Expedition’s price is easily competitive with vehicles like the Tahoe, Suburban and GMC Yukon. It comes in at a bit more than the Nissan Armada, but it’s a significantly larger vehicle with a much bigger interior. It’s comparable in size to the Toyota Sequoia but has far surpassed that old, outdated model. It’s more refined, with a much nicer interior and a multimedia system that’s at least two or three generations more current.

With buyers snapping up big SUVs in increasing numbers, Ford’s update to its big truck comes at the perfect time. That the truck is as good as it is should put Chevy on notice.

Worst new car I have ever had

It seems Ford really rushed this model out. I have had it for three years 50k miles and have had it in for service at least ten times for repairs and I'm still not done. It seems the warranty doesn't cover much. And the additional warrenty (Platinum) covers less. We have had engine problems, seat problems (still exist) wheel well liners that have fallen apart (Still and issue) $600 to replace the rear pair. OMG. Two light assemblies that have leaked. Third brake light leaks. windshield washer system leaks, and we keep getting told there is no leak but every time we get it back we have a quart of blue fluid on our garage floor (still and issue). Bottom line don't buy this vehicle unless you enjoy sitting in a ford service department waiting room.

Ford got the large SUV right!!

This is the 5th Expedition that I have owned over the years. This current generation is a fantastic vehicle which checks all of the boxes. The interior is terrific with plenty of room and comfort, even in the third row for adults.

Love it has all the room I need I am 6feet 5 inch's tall works for me. Handles well and good gas mileage for a big car

News
Top 5 Reviews and Videos of the Week: Genesis G70 Has Entered the Game