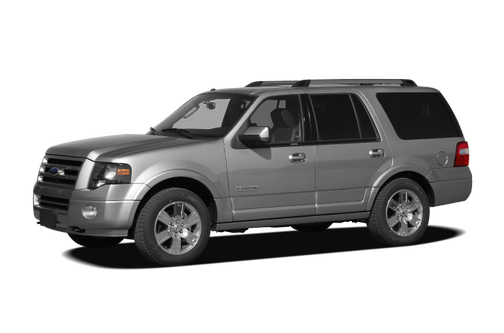 Our 2008 Ford Expedition trim comparison will help you decide.

Editor’s note: This review was written in January 2007 about the Limited 5.4L 4×4 version of the 2007 Ford Expedition. Little of substance has changed with this year’s model. To see what details are different this year, check out a side-by-side comparison of the two model years.

Somewhat lost in anticipation of Ford’s new Edge crossover is the fact that the automaker has redesigned the Expedition, its full-size SUV and onetime cash cow. While the big news (literally) may be the new extended-length version dubbed EL, Ford’s core regular-length Expedition gets new styling inside and out, a new six-speed automatic transmission and chassis modifications.

The net effect is a full-size SUV that delivers a driving experience that rivals — and in some ways bests — that of Chevrolet’s redesigned Tahoe. That’s high praise, and aside from spongy brake pedal feel, the Expedition offers poise and refinement that are truly world-class for a big SUV.

Exterior & Styling
The 2007 Expedition’s most significant styling changes are in its front end, which has a new four-bar grille and more-angular headlights. The grille is available in chrome, but my test car’s was finished in black, like the rest of the car, making the Expedition look pretty intimidating (as if its hulking size weren’t enough). There’s a new hood with a pronounced power dome, and standard running boards help make the climb into and out of the SUV easier.

The Limited trim level has power-folding side mirrors, and a powered liftgate is newly optional. The base aluminum wheels measure 17 inches in diameter, but 18- and 20-inch rims are offered.

Ride & Handling
I’ll admit I was a bit surprised by the Expedition’s exceptional ride quality. It goes without saying that you have to take corners with care in a vehicle like this, but body roll has been reined in fairly well. The Expedition’s four-wheel independent suspension — still uncommon in full-size SUVs — has been redesigned, and a rear automatic-leveling system is optional. My test model, a Limited 4×4, had the leveling system and rode firmly. It also felt very stable around town and on the highway, though it sometimes was a bit unsettled when making a quick lane change.

There’s no denying the Expedition is a large vehicle, but it’s pretty easy to get accustomed to its size. That’s saying something, as some of these behemoths can be nerve-racking to drive on the narrow streets around Cars.com’s Chicago headquarters. A significant contributor to the Expedition’s confidence-inspiring ways is its steering system, which allows the SUV to maneuver through parking garages and mall parking lots with relative ease. The steering wheel is teamed with a new variable-assist system that delivers direct, luxury-carlike response. The steering wheel itself is well isolated from bumps in the road and turns with impressive smoothness. Overall, the system delivers a better experience than the Tahoe, which has steering that’s less precise and more susceptible to shock from bumps in the road.

Going & Stopping
All Expeditions are powered by a 5.4-liter V-8 that makes 300 horsepower and 365 pounds-feet of torque. A six-speed automatic transmission replaces the previous four-speed automatic, and Ford says the new transmission improves performance and gas mileage. While the 2007 Expedition does weigh about 200 pounds more than its predecessor, the fuel savings are pretty modest: A two-wheel-drive Expedition has EPA-estimated fuel economy of 14/20 mpg (city/highway), while a 2006 version managed 14/19 mpg.

Fuel economy aside — since that’s not the main selling point of SUVs like the Expedition — the drivetrain moves this near-three-ton SUV rather well considering the weight it’s burdened with and the Expedition’s less-than-svelte dimensions. The new six-speed automatic is another plus; it never made a harsh shift during my weeklong test.

Now if only Ford could give the Expedition better brake pedal feel. The all-disc brakes stop this SUV capably, but the Expedition’s brake pedal has the same spongy feel that plagues the smaller Explorer Sport Trac SUV/pickup truck.

The Inside
Ford says the outside of the Expedition draws inspiration from the automaker’s F-Series line of pickup trucks, and that theme continues in the cabin. The dash and center console don’t have the tightest of panel gaps, but everything feels solidly attached. The new dashboard is more angular than the one it replaces, and the plastic panels have nice graining and a low-gloss finish that lend an upscale appearance to the cabin. Less appealing is the tacky-looking faux wood trim on the dashboard, center console and doors. The Limited model has a leather-clad real-wood steering wheel, but I don’t understand why imitation wood trim takes the place of the real thing elsewhere, especially when you consider this trim level’s starting price approaches $40,000.

Side body panels are inching ever higher on many of today’s cars and SUVs, which makes for increasingly shorter side windows — think Chrysler 300, Dodge Magnum and Hummer H3. While this technique creates a tough, stylish shape on the outside, it can also make for a claustrophobic cabin. The Expedition defies this trend, and I love the results. In the front- and second-row seats, your arms fall almost level with the bottom edge of the tall side windows, which makes for great side visibility to go along with the impressive forward and rear views afforded by the thronelike driving position.

Cloth seats are standard and leather is optional. The optional third-row seat is only available in vinyl. The Expedition’s leather front bucket seats have soft cushioning but are supportive enough for extended highway driving.

The second row can be either a 40/20/40-split bench seat or two captain’s chairs. There’s good legroom and headroom there for adults, and both seat types have reclining backrests. The middle section of the split-bench seat can slide forward 11 inches to make it easier to tend to a small child from the front seats.

Unlike the Tahoe and Toyota Sequoia, where the third row is removable, the Expedition’s optional 60/40-split third row can fold flat into the floor when not in use. Power-folding operation for the third row is available. The Tahoe’s third row is best left for kids, but the Expedition’s can accommodate adults with ease. The outboard backrests, which are oddly sculpted to accommodate lowered head restraints when the seat is folded, might get irritating on a long trip, but this is a minor issue; seat comfort and roominess is otherwise good. Nice job, Ford.

Safety
The National Highway Traffic Safety Administration awarded the Expedition five stars in its frontal crash test, based on driver and front passenger protection. Five stars is NHTSA’s highest rating for this particular test and represents a 10 percent or less chance of serious injury to front-seat occupants.

Standard safety equipment includes antilock brakes, side-impact airbags for the front seats, side curtain airbags and an electronic stability system that features Ford’s Roll Stability Control. RSC’s gyroscopic sensor is used to sense a possible rollover and can apply the stability system in an effort to bring the SUV under control. The second-row bench seat has a set of lower anchors and a top tether for each of its three seating positions.

Cargo & Towing
With all the seats up — including the optional third row — there’s 18.6 cubic feet of room for hauling cargo. That’s slightly more than a similarly configured Tahoe, but a little less than the Nissan Armada. The Expedition’s capacity jumps to 55 cubic feet with the third row folded, and 108.3 cubic feet (nearly identical to the Tahoe) if you fold the second-row seats.

When properly equipped, the two-wheel-drive Expedition can tow up to 9,200 pounds, which is more than the maximum ratings for the Tahoe, Armada, Sequoia and Dodge Durango. I didn’t have a boat and trailer handy to test the Expedition’s towing prowess, but I’d be interested to hear from those who’ve pulled something with this SUV; send me an email with your trailer-towing comments.

Features
Options include heated and cooled front seats, a navigation radio with a six-CD changer, Sirius Satellite Radio and a rear DVD entertainment system with an 8-inch overhead screen and two pairs of wireless headphones. The optional Convenience Package includes power-adjustable pedals and Ford’s Reverse Sensing System parking aid (which beeps if you get too close to objects behind you).

Expedition in the Market
Vehicles like the Expedition have taken a hit recently as car shoppers are paying more attention to gas mileage and figuring out what level of capability they really need in a vehicle. We likely haven’t seen the last of this phenomenon, but there are still buyers out there whose needs can’t be met by one of the growing number of car-based crossovers. If a powerful full-size SUV is what you need to tow a boat or camper and still have room for the family and all their stuff, the Expedition seems more than up to the task.

Best car I have ever owned -2014 Ford Expedition

March 29, 2020
By expedchief from Palm Coast, Florida
Owns this car

I purchased this vehicle in December 2014 with 66K miles on it and the 5.4L V-8.. I immediately serviced my Expedition with AMSOIL products. With the exception of normal maintenance items (Brakes, spark plugs etc.), this vehicle has been entirely trouble free. have had ZERO maintenance issues, check engine lights, etc. on this truck at all, and 5+ years later it now has 221K miles. Mostly road miles between my home and in Flagler County and my shop in Ocala, and my daughters home in Pensacola. Average gas mileage was between 18-20mpg without a tow load, 15-16mpg with a tow load. Not bad for a large SUV. I just recently purchased a 2014 Navigator with 70K miles and also the 5.4L. Other than being a stickler for routine maintenance, this vehicle has not been babied in any way. The dependability of this engine and drive train has been second to none in my experience, which is why I purchased this SUV as it is the last year of the 5.4L. I have classic cars and towed them with my Expedition. Great towing vehicle as well. Of course, it is all about how folks take care of their vehicles, but I have nothing but praise for the 2014 Expedition. So if you are looking for a large SUV I don't feel you can go wrong with a Ford Expedition.

i brought my 2008 ford expedition EL limited last year i did own a suburban which isn't nothing like the expedition i towed a car back from el Paso tx to Odessa tx 4 hours drive even tho it needed a tune up an a torque converter it still did a wonderful job going up an down the hills with no problem doing 75mph i really couldn't tell that it was back there family of 6 very comfortable great on gas i will say they are most definitely worth the money people always talking bad about ford 5.4L i haven't had any problems with my suv this suv out tow an haul any Tahoe

Great for hauling the family or whatever

I’ve owned a 2008 Expedition for 10 yrs. Lots of space, good power, and in the snow it’s great. Mine is a later build engine with the newer spark plug design, no problems there. I would have bought another Expedition but a pickup truck fits me better nowadays, but now and then I miss the Expedition.

Rating breakdown (out of 5):
0 people out of 0 found this review helpful. Did you?
Show full review
See all 32 consumer reviews 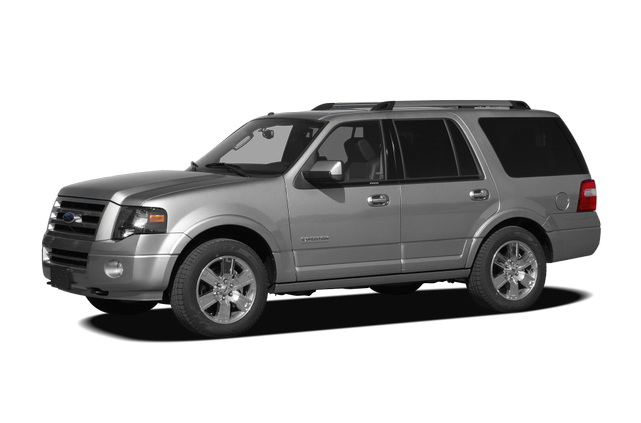 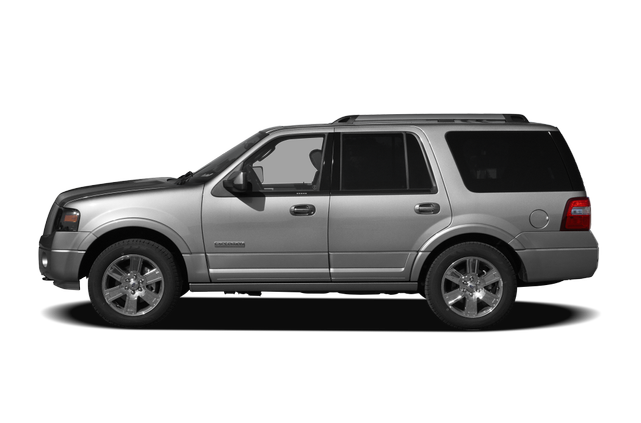 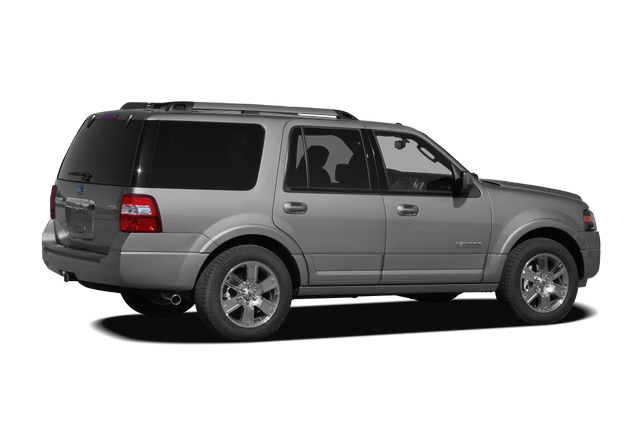 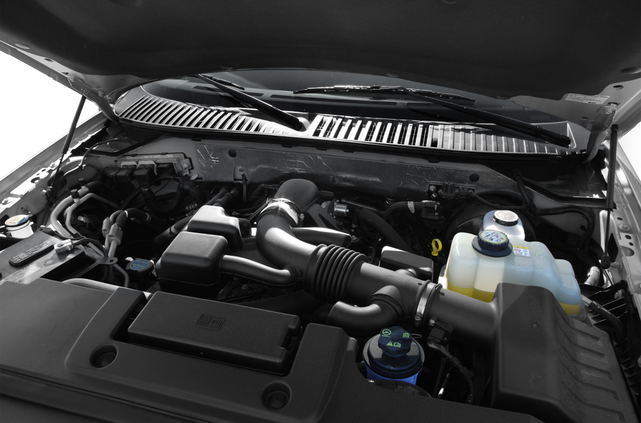 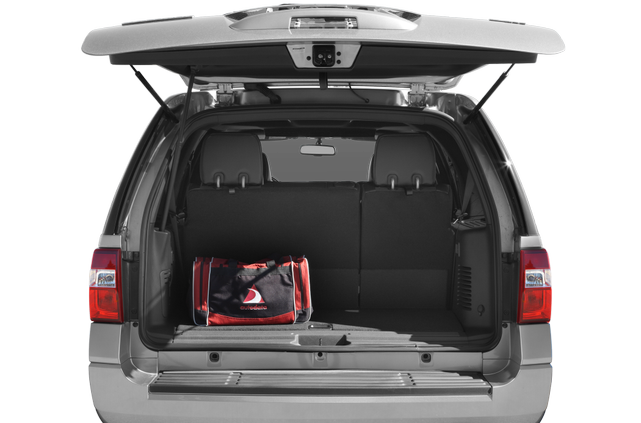 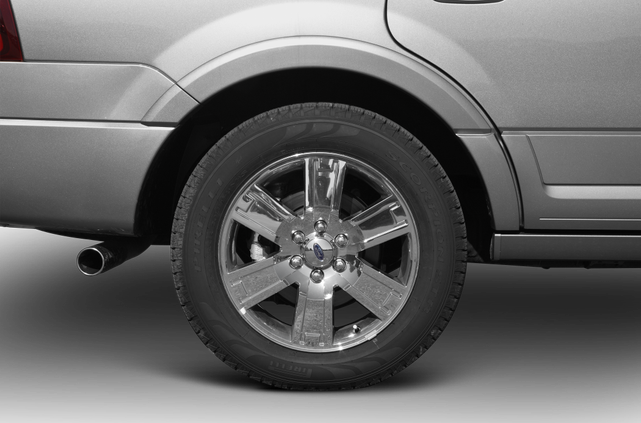 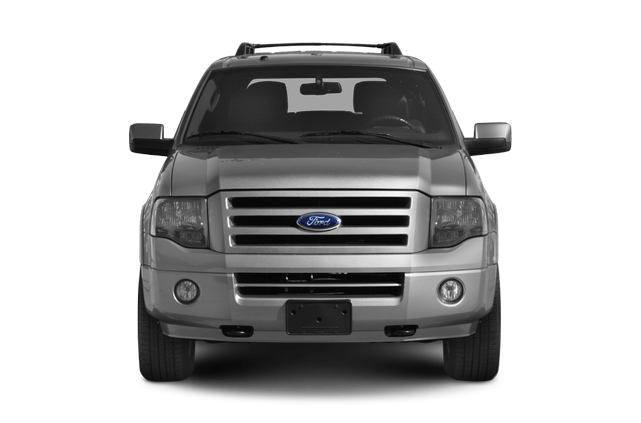 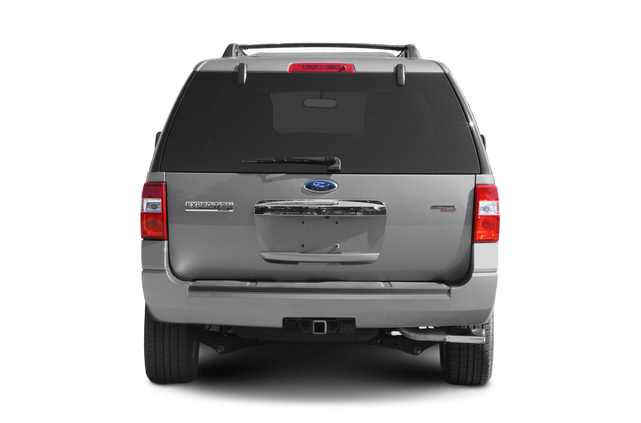 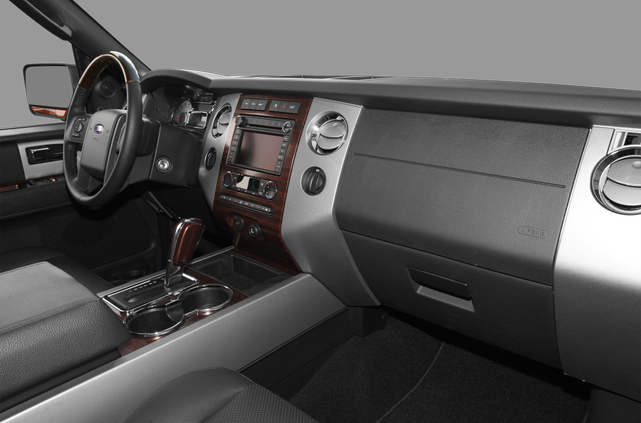 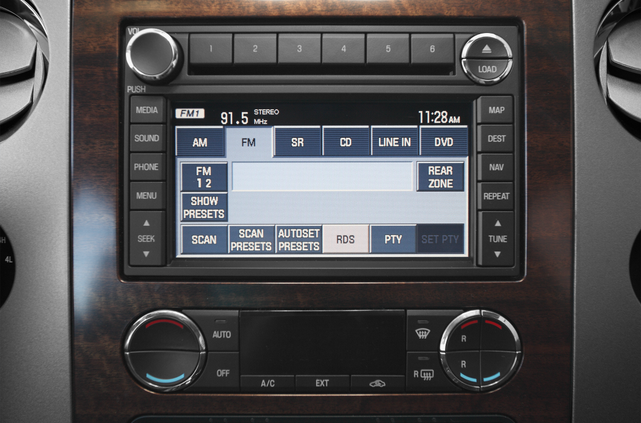 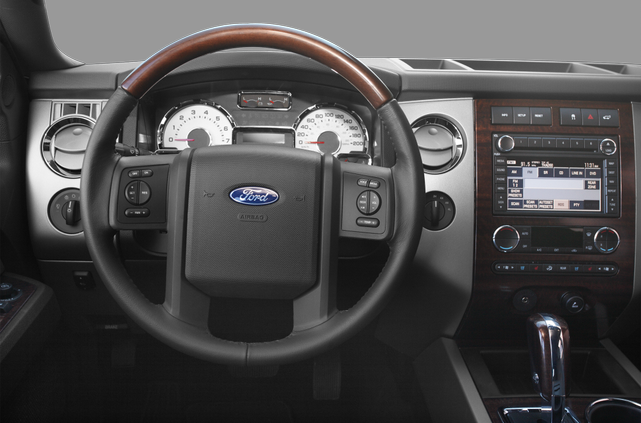 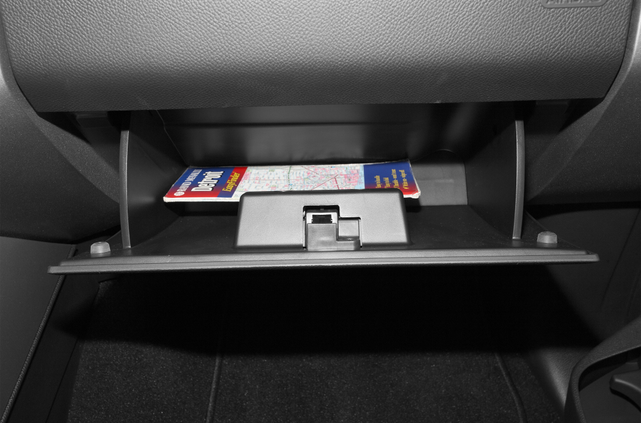 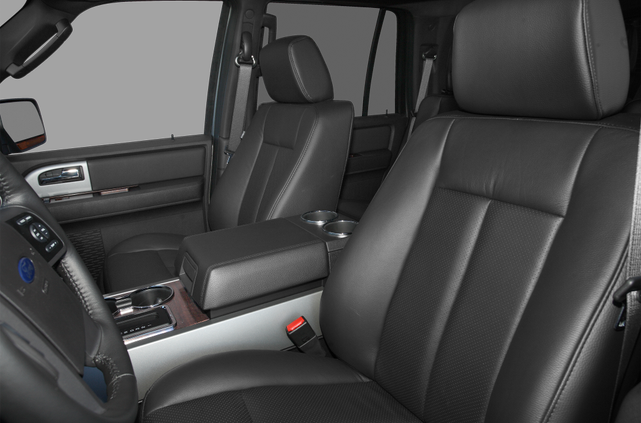 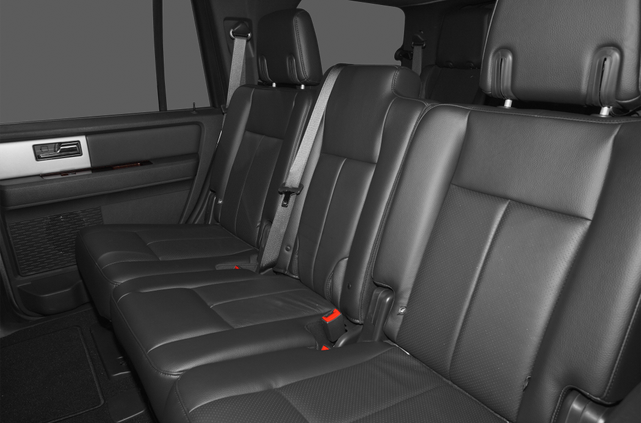 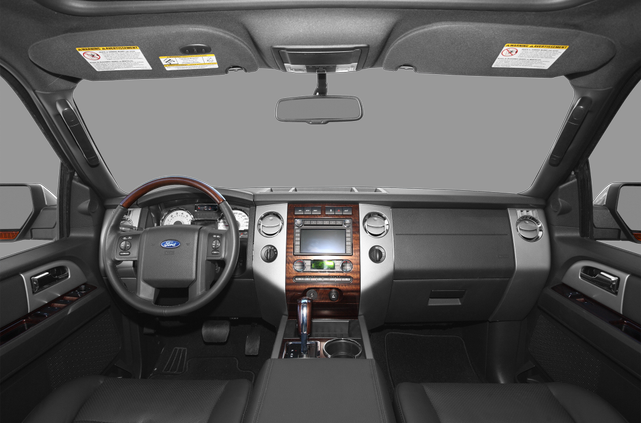 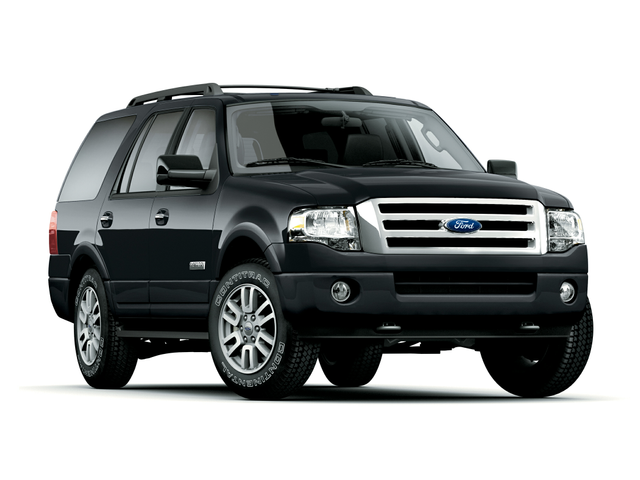 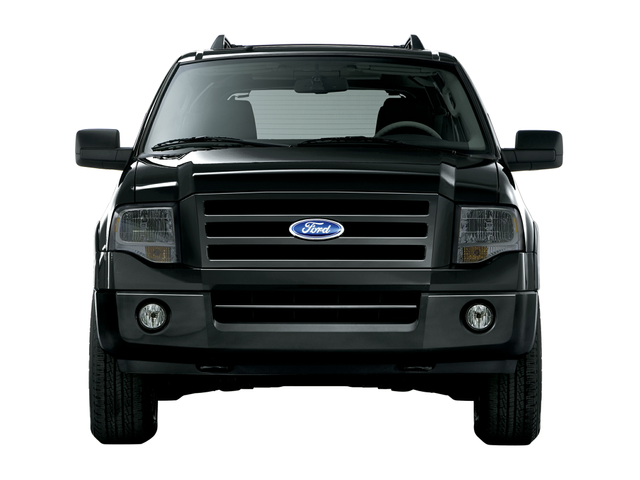 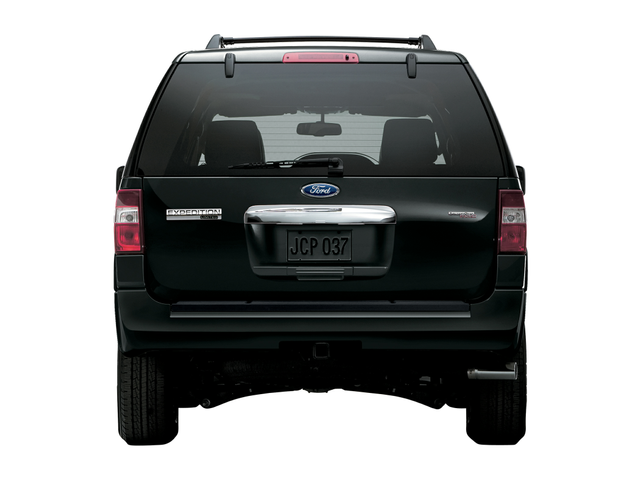 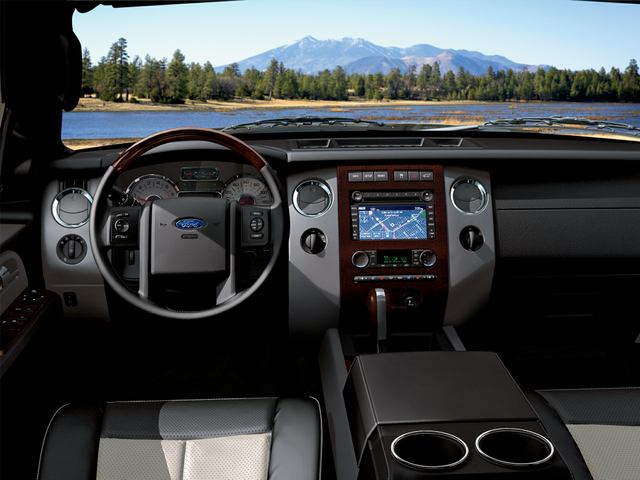 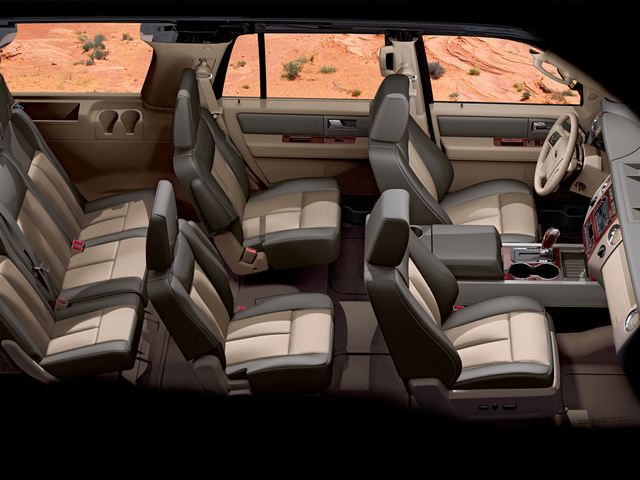 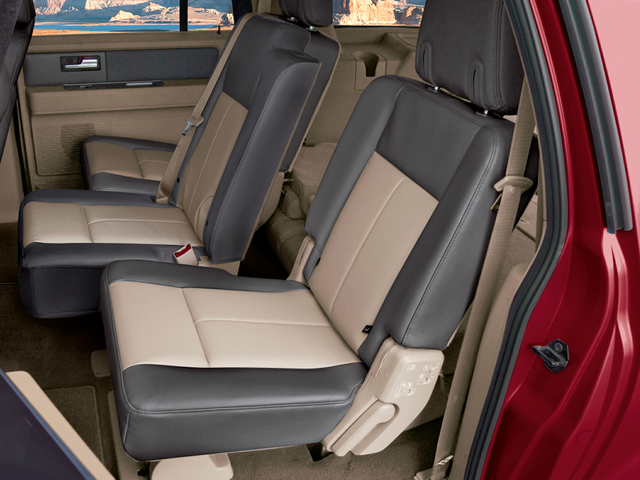