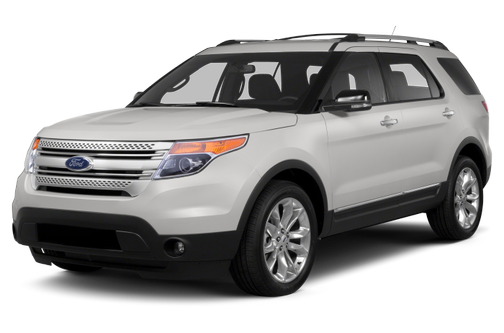 Our 2013 Ford Explorer trim comparison will help you decide.

If only for the sheer fun of barreling down the road in a turbocharged V-6 SUV, the Ford Explorer Sport brings welcome fun to the Explorer nameplate for 2013. The new Sport trim level adds the third and most powerful engine to the Explorer lineup, which helps it hustle past other three-row SUVs — even the few that still offer V-8s. It returns respectable EPA gas mileage and improves on lesser Explorers’ mediocre handling. The Sport does for the Explorer what hot sauce does for wings.

Though its range of efficient engines is unmatched among SUVs, lingering issues diminish the 2013 Ford Explorer’s appeal.

Those shortcomings had the SUV in a tie for last place in our $37,000 SUV Shootout last year, and while this year’s updates address some of them, they ignore others.

The Explorer seats six or seven, depending on seating configuration, and comes in base, XLT, Limited and Sport trims. Compare them here. Besides the addition of the Sport, the 2013 Explorer also gets some updates to its optional MyFord Touch system; stack up the 2013 and 2012 Explorer here. The Sport comes with standard all-wheel drive while the others offer front- or all-wheel drive. Engines include a turbo four-cylinder, a normally aspirated V-6 and a turbo V-6; Ford markets both turbos under the EcoBoost moniker. We’ve tested all three.

From Slowpoke to Speeding Ticket
The Explorer’s 240-horsepower, turbocharged 2.0-liter four-cylinder — a $995 option on front-drive trims — boasts an impressive EPA-estimated 20/28/23 mpg city/highway/combined fuel economy, but the tradeoff comes in poky acceleration in most situations. We drove the 2.0-liter Explorer near Ford’s Romeo, Mich., proving grounds last year, and with three adult occupants on hilly roads it needed most of its reserves — plus frenzied, how-’bout-now downshifts — to keep up speed. The same engine hustles the smaller Ford Edge well enough, but the Explorer is nearly 500 pounds heavier, and it lumbers. Plan your passing accordingly.

The all-wheel-drive Explorer Sport blasts past all comers thanks to its 365-hp, turbocharged 3.5-liter V-6. It’s a performance bargain: No midsize SUV near the Sport’s sub-$42,000 price packs this sort of acceleration — and that includes the V-8 Dodge Durango. The Explorer Sport pulls strongly all the way up to 70 or 80 mph, with decisive shifts even on two-gear kickdowns from its six-speed automatic.

Ride quality in non-Sport Explorers beats the choppy Highlander and the firm Honda Pilot, with decent isolation over ruts and expansion joints. The Explorer Sport retains most of that character, though it lets a few more hints of pavement disruption creep into the cabin. The Sport adds chassis reinforcements and a sport-tuned suspension with a rear stabilizer bar. The Sport has 20-inch wheels and P255/50R20 tires, which are optional on lesser trims. A $995 option unique to the Sport is high-performance P265/45ZR20 summer tires; our test car had them.

Throw it all together and the Sport sharpens the Explorer’s handling a great deal. Gone are the pervasive body roll and sloppy steering — though all Explorers get new steering hardware, so it’s possible the latter improvement comes across the board. The Sport attacks switchback turns with flat, planted composure and engaging steering feedback; its larger disc brakes deliver confident, linear stopping.

Take to the dirt or snow and every all-wheel-drive Explorer includes a Terrain Management System that optimizes drivetrain and stability-system settings for sand, snow or mud via a dashboard knob.

Unaddressed Problems
No question: The Explorer Sport is tremendous fun. The Explorer overall, however, has problems. Headlining them are Ford’s touch-sensitive MyFord Touch controls — optional on the XLT and standard with the Limited and Sport — which remain near-impossible to use while keeping your eyes on the road. The controls in this system respond faster than they used to, thanks to an update for 2013 (see the details here), but MyFord Touch’s dashboard screen is still relatively slow.

Cabin materials are good, with low-gloss materials and padding where it matters up front. Rear passengers get cheaper textures, and all positions suffer poor forward visibility due to short windows, a high belt line and thick A-pillars. The first and second rows have upright seating positions with good thigh support, but legroom is modest in both. I could have used another inch of front-seat travel for my 5-foot-11 frame, but adding more travel range would have made the second row untenable for all but children.

Third-row room is tight — the norm in this class, though the Dodge Durango and Ford’s own Flex buck the trend — and the Ford Explorer SUV remains among a shrinking number of SUVs that don’t offer sliding second-row seats for walk-in access to the third row seating. (The Pilot, Highlander, Pathfinder and Chevrolet Traverse all do.) Getting to the way-back seats requires a yesteryear process of flipping and tumbling the second row. Swapping the three-position second-row bench for optional captain’s chairs adds a narrow pass-through to the third row, at least. The captain’s chairs recline and adjust forward and backward, allowing third-row passengers to negotiate more legroom from their second-row cohorts. The 60/40-split bench seat has a bizarre setup, however: Both sides recline, but only the 40-percent portion slides forward and back.

Cargo room behind the third row measures an impressive 21 cubic feet. Fold down the second and third rows and maximum volume totals 80.7 cubic feet. That’s in line with the Pathfinder, but on the small side in this group. The Pilot and Highlander have 87 and 95.4 cubic feet, respectively, and the Traverse boasts a near-minivan-level 116.3 cubic feet.

Safety Shines, Reliability Stinks
With top crash-test scores across the board, the Ford Explorer has the distinction of being a Top Safety Pick from the Insurance Institute for Highway Safety and having a five-out-of-five-stars rating from the National Highway Traffic Safety Administration. The latter designation has become rarer ever since NHTSA upgraded its testing procedures a few years ago. Seven standard airbags include a new front-passenger knee airbag for 2013 (curiously, the driver doesn’t get one) plus the federally required antilock brakes and electronic stability system. A blind spot warning system, forward collision warning and Ford’s inflatable second-row seat belts (read about them here) are optional. Click here to see a full list of safety features or here to see our evaluation of child-seat provisions.

If safety for the current Explorer is exemplary, reliability has been abysmal, though much of the Explorer’s poor reliability rating comes from its glitch-prone MyFord Touch system. Like many recent Ford owners, we’ve seen the system freeze, reboot and generally go haywire in our press cars. Upgrades for 2013 aimed to fix the glitches, and as of this writing the results haven’t yet factored into recent reliability figures. The system in our 2013 Explorer incurred no major disruptions — but we’ve already experienced MyFord Touch freezes in other 2013 Fords (read more here). Not good.

The base, front-wheel-drive Explorer starts just under $30,000 — competitive with its body-type peers — and comes standard with a power driver’s seat, steering-wheel audio controls and manual air conditioning for the front and rear cabin. Among the options are MyFord Touch, Ford’s Sync voice-recognition system, navigation, dual-zone front automatic climate control, heated and cooled front seats, a heated steering wheel and a dual-panel moonroof. On the Explorer base, XLT and Limited, all-wheel drive runs $2,000; it’s standard on the Sport. The sub-$42,000 Sport runs just $595 more than an all-wheel-drive Limited, which has a few more standard features and high-tech options, like an auto-parking system (read more here). Load up a Limited or Sport with all the factory options and the price tops $52,000.

Explorer in the Market
Have the Ford Explorer’s issues really dampened its appeal? Perhaps not so much. Through October, Explorer sales have trounced the competition. Sales are up 21 percent despite the current-generation Explorer having been around since late 2010. The new, screaming Sport should only add to Ford’s lead. By all means, shop the Explorer and open up the Sport on an empty road if you can. But mind the shortfalls and take a hard look at the competition, too.

June 3, 2021
By AriesQueenJackie from Atlanta, Ga
Used to own this car

This car was gorgeous, royal blue. It exceeded every expectation i had as far as style and comfort are concerned. We have a big family so the third row was convenient and folded so nicely when unneeded. Sunroof and moonroof. Heated and cooled seats. Heated steering wheel. It costed entirely too much in gas and had a lot of computer glitches (in display screen not performance). Transmission acted a little funny one day so I decided to upgrade. Granted It was a 2013 not brand new, but if Ford isn’t built to last more than 8 years, I’m moving on.

First day owner but love it so far

May 16, 2021
By C Pearce from North Riverside
Test drove this car

Nice 1st step to me getting my dream truck

It’s a nice truck & has great miles. I love my pan Aramaic sun roof & remote start. It came with TVs inside. In like that it has built in navigation.

Rating breakdown (out of 5):
0 people out of 0 found this review helpful. Did you?
Show full review
See all 209 consumer reviews