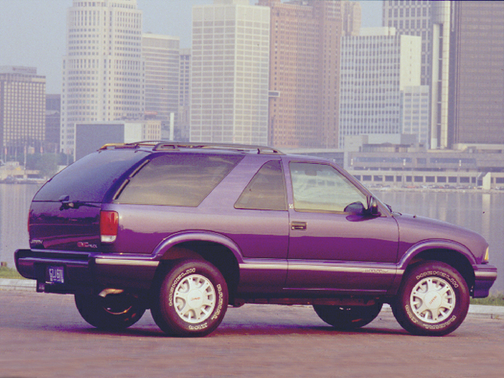 Our 1995 GMC Jimmy trim comparison will help you decide.

Everything that’s been said of the Chevrolet Blazer applies to the GMC Jimmy.

Has to-it’s the same vehicle except that the grille sports big G-M-C letters where Chevy put its bow-tie logo.

Jimmy offers the same expanded interior dimensions for increased roominess, the same occupant-friendly suspension to cushion you from road harshness, the same car-like ride and handling that makes you feel as if you’re behind the wheel of a sedan rather than a sport-utility vehicle, the same powerful 4.3-liter, V-6 that allows you to merge with ease or tackle the hills and inclines without a running start.

There’s also the same availability of push-button four-wheel-drive activation, which we were able to use in a recent snow.

The button makes for quick change to four-wheel pulling power and about the only difference between two- and four-wheel-drive mode is that you’ll detect a tad more road noise in four-wheel, though the noise level in four-wheel drive in the ’95 is about the same as in two-wheel drive in a ’94, thanks to more sound deadeners and more attention to quiet operation in the redesigned ’95.

If you opt for a transfer case lever to engage 4WD, a change was made to ease the task. Push a button on the lever and the shift is smooth, not forced and finicky as it was when you had to fight when going from two-wheel-drive to four-wheel-drive high and enlist a sumo wrestler to engage four-wheel-drive low.

Of course, being fraternal twins means you not only share the same joys, but the sorrows, too.

Jimmy, like Blazer, lacks a passenger-side air bag, though one is coming because all trucks must offer dual bags by 1998.

And you’ll have to suffer the infernal hump in the floor on the passenger side, an accommodation for the catalytic converter. The two-door has one problem the four-doordoesn’t: large forward-slanting side roof pillars that look Pathfinder-like and obstruct the side view.

Also, though the 4.3-liter is potent, it has a thirst, as the 16 mile-per-gallon city/21 m.p.g. highway rating indicates. We admit that when driving in that recent snowstorm the 16/21 m.p.g. rating probably was the last thing on our mind, but there are about 360 days each year when sidling up to self-serve gets annoying-and expensive.

One other gripe: Despite a redesign for ’95 that increased Jimmy’s interior dimensions, it passed up the chance to add slightly larger and thicker side bolsters to better hold you in your seat when driving aggressively.

One other point, which can be a nuisance for shorter folks, is that the outside mounted spare tire carrier in back blocks part of the rear window so you lose some field of vision.

About the only other problem is that sport-utility vehicles are a hot commodity-particularly Blazer and Jimmy-and the rule of thumb in the a uto industry is to make money while you can. So the two-door vehicle we tested had a base price of $20,157, and the four-door starts at $22,205. Options on both quickly raise your debt.

The SLS decor package on the two-door sets you back $3,439 for a host of power goodies, from windows and locks to mirrors, as well as what may be the least-used item on to any vehicle, the roof-mounted luggage carrier.

On the four-door, the option package is $5,248 for the extra power goodies and the stupid luggage rack, which, in case most people don’t notice, makes it difficult to wash and wax your vehicle and often serves no other useful purpose than to be the source of water marks when you miss with the chamois.

The only other complaint is personal: a vehicle named Jimmy?

One word of warning. Jimmy is available in Radar Purple, one very unusual color. You must pause a minute and consider whether you’ll love that hue as much three or four years from now as you do today. However, we admit that when the snowstorm came and all the cars in the lot were buried, Radar Purple stood out like a beacon to help us find our vehicle while others were searching for theirs.

September 16, 2018
By Car Searchers from Richmond, BC
Used to own this car

My dad bought this car in 2010. I loved it. The car could do anything, off-roading? No problem. Camping? Easy. Landscaping? Surprisingly Easy. But after a year of my mom driving a Denali, my dad sold it for business, so my mom drove the Jimmy. She drove me to pre-school and drove herself to work, about 45 KM everyday. In 2014, About a month before my mom bough her terrain, We gave it to my dads friend, and I'm assuming the car is scrapped, because of his driving skills. The only issue with the car was, whenever we opened the trunk, we had to hold it open or else it would slam down, otherwise, best car ever.

I bought my Jimmy from a girl from Utah, so I'm second owner. Best Car we've had, really, this February it'll be 11 years with us !! Now it has 167,487 miles and still runs great; i'm thinking it buying a newer SUV but don't wanna get rid of my Jimmy. The only problem I had it was the fuel pump, but that's it, of course i take good care of it; because it really earns it, i work 7 days i always count with my Jimmy to take wherever I have to go.

I purchased this truck totally uncared for by an urban woman.Many others who might have been ahead of me never made it there as it was a ruff area.I picked this car up at night so their were some things i failed to see. Ive seen reviews with these trucks having big transmission issues.But for 1200.00 cash i was just looking for a winter beater. After my total face lift of the car, changing ALL the fluids, and filters, etc, the vehicle became a pretty good running truck. The transmission does act a bit weird in shifting from start up, but never a grind or bump or slip. These trucks like the S10 have an issue with the driver doors off alignment, starter which by the way you must remove the flywheel cover to get to it and is too tight to take off by hand. Also the o2 sensor will be an issue.It has recently had lower joints done and is read for uppers.Not unusual for the mileage. My main issue i have is this thing drinks gas.I drive with light foot and still it seems to burn gas like a V8. Haven't yet found a way to reduce it as ive tried plugs, wires, air filter,etc. Maybe adding octane as it helps a bit. I purchased at 120.000 which isnt bad for the year. Also i might add this truck doesn't have the best acceleration. Your normal take off is great.But in mid speed of you want to play catch up and floor it you might be disappointed.But as i have a certain brand of plugs in it, maybe the problem.Something i will have to check. IT does turn heads as it roars in the first gear on residential streets.Also the red shiny paint job.Which ive noticed cracks easy as i see in the lower part of the truck.Some kind of adhesive might stop that. Bottom line is pre-maintenance and don't beat the truck down.Change fluids before due date.Especially transmission. Another trick i do with all my cars is if you feel the trans in gear and its high about to auto shift, back off the pedal. The computer will actually monitor your driving and takes stress off the trans when you do this. Also at a light, if it is long, put it in neutral to avoid stress.Specially in drive thru.

All model years for the GMC Jimmy 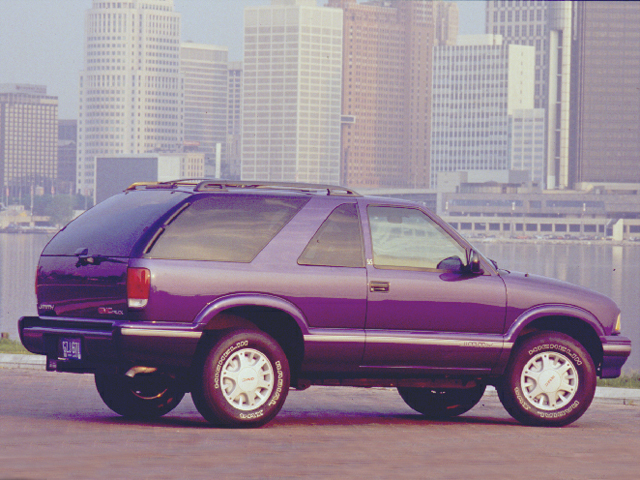