Our 1993 Chevrolet Blazer trim comparison will help you decide.

Sometimes, rather than shouting, whispering will do.

That’s what Chevy did with its full-size Blazer in the 1993 model year.

Blazer was the gas-guzzling, rust-prone sport-utility vehicle that underwent a major styling overhaul for 1992, when Chevrolet switched it to the same platform as the full-size C/K pickup truck.

No longer a big, lumbering box on wheels, the new Blazer was streamlined. The square edges were rounded off, large expanses of tinted glass were brought in and the interior was made more user-friendly.

The 1992 got all the fanfare. For 1993 you’d expect Chevy to sit back, pat itself on the back and enjoy the vehicle’s new popularity. Instead it quietly made subtle refinements to the ’92.

We test-drove a ’93 four-wheel-drive Blazer in Silverado trim to check out what was new in just 12 months.

Except for an engine that still gulps fuel and the fact that the long-awaited air bag isn’t due until 1995, those little changes represent some major improvements.

The Blazer now offers a 4-speed electronically controlled automatic transmission that monitors fuel injection rate, driving habits (aggressive or conservative), ignition timing, idle speed, even internal transmission temperature and exhaust gas recirculation to determine the shift points. There’s even second-gear starting on slippery surfaces to ensure better traction. An added benefit is that the 4-speed is smoother and quieter than it had been-almost like a luxury car.

The same 5.7-liter, 210-horsepower, V-8 is under the hood, and that means a rather meager 13 miles per gallon city/16 m.p.g. highway rating. If only Chevy could get that up to 15-16 m.p.g. city and 20 m.p.g. highway. One engine improvement was made. The fan doesn’t engage when the engine is started in order to reduce noise. Another luxury-car type of feature. Perhaps Chevy thinks it’s Cadillac. Now if only Chevy could boost the mileage, and not simply the driving range, by offering a larger gas tank.

There’s also four-wheel anti-lock brakes as standard as well as Insta-Trac shift-on-the-fly, four-wheel drive. With Insta-Trac you still must shift a lever on the transfer case rather than activate the 4WD by simply pushing a button on the dash like you do on the smaller, compact Chevy S-10 Blazer.

Push button would be preferable because it would provide instant 4WD traction and save space by eliminating the transfer case on the floor in front. Push-button 4WD is coming for the big Blazer, but probably not until 1995 at the earliest.

Suspension and steering, which were lifted from the C/K truck, are a pleasant combination that would have been even more enjoyable if not for the substitution of oversized LT265/75R16C tires for the standard LT225/75R16C all-season tires. They are just large enough to make the center of gravity high enough to make you back off the accelerator on those wide curvi ng merger ramps in order to avoid top-heaviness and wobble.

Inside, the bucket seats are comfortable and supportive in front. Ditto for the bench in back. Nice touches include dual cupholders in the massive center console/storage hold up front and individual built-into-the-wall cupholders in back. Scotchgard protects the fabric seats and Solar-Ray glass reflects ultraviolet rays for a cooler interior.

Outside, two-sided galvanized steel on all body panels except the roof, anti-stone-chipping paint along the rocker panels and plastic wheel-well covers help Blazer shed its rust-prone reputation.

Our vehicle came with the full-size spare tire along the sidewall in back. It robbed some stowage room you’d would have if the tire was mounted outside, but there is so much cargo area in back that the sacrifice isn’t fatal. And if you need to haul a great deal, the Blazer can tow 7,000 pounds.

If we could make one more refinement other than increasing fuel economy and adding air bags, we’d build a step into the rockers to make for easier entry and exit, especially now that more women are driving the big Blazer.

Consumers are turning to sport-utility vehicles as an alternative to luxury cars. The thinking is that the sporty-utility not only is loaded with just about every creature comfort and accessory in a luxury car for far less money, but that it serves a variety of functions-from daily commuter to weekend vacationer to off-road toy. That means a lot of value for the money. The Blazer is ample evidence that a sport-utility can play a variety of roles-and well.

Chevy soon will take the full-size Blazer a step further by adding a four-door version. With four-door sedans more popular than two-door coupes and with sport-utilities becoming more family vehicles than individual haulers, there’s a need for two more doors.

In a recent interview, Chevy general manager Jim Perkins vowed that his division will beat Ford to market with a full-size four-door utility vehicle. Ford is preparing a four-door version of the full-size Bronco, reportedly in the 1996 time frame. It’s likely the four-door Blazer will come out in 1995 as a 1995 or early 1996 model.

NOt a good deal (overpriced) if you don't mind 10 miles/gal city and maybe 13 -14 miles/hwy. Roomy but could be better.

Rating breakdown (out of 5):
0 people out of 1 found this review helpful. Did you?
Show full review
See all 1 consumer reviews 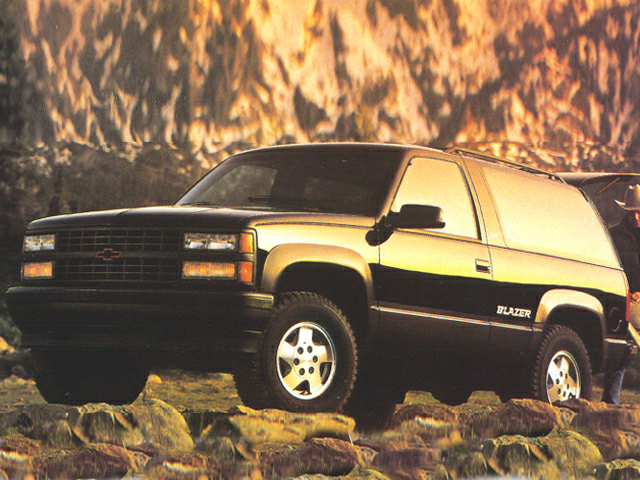