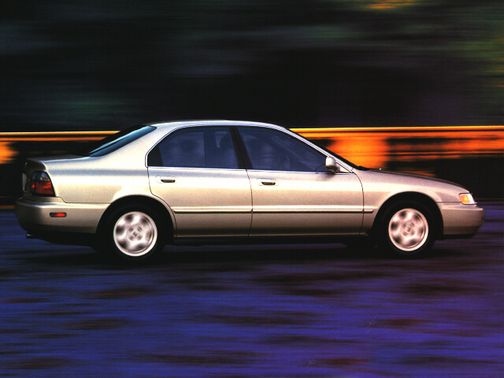 Our 1996 Honda Accord trim comparison will help you decide.

1996 Honda Accord review: Our expert's take

The sweet smell of success at American Honda Motor Co. comes from the Honda Accord cars built exclusively at Marysville, Ohio.

For 1996, Honda has revamped the styling on its sedan, coupe and wagon models. The cars already were pretty good-looking vehicles, so achieving a sharper appearance wasn’t easy.

Honda’s California-based designers obviously were strongly influenced by the wind tunnel, as the overall theme of the car is aerodynamics. Stylists started at the front, then went to the rear, adding some individualistic touches in-between.

The front end retains the low nose, accented by headlamps that flow back into the fenders. A chrome- accented grille gives a more sophisticated look.

The relatively short, high deck in the rear is enhanced by lights and chrome accents.

Engineering got into the act at the rear with a trunk opening that is nearly five inches larger for easier loading and unloading. Then they used trunk hinges that enhance cargo space.

The new Accords come in DX, LX and EX form, with the DX sedan the entry level at $15,100, including a five-speed manual transmission. The LX sedan with a four-speed automatic is the most popular model and has a sticker price of $18,890.

Honda always has been at the forefront in engine design, as witnessed by its pioneering of variable-valve timing. Buyers are offered a variety of powerplants with four-cylinder or V6 engines featuring four valves per cylinder.

Generally, four valves are accompanied by double overhead cams, but Honda does it with a single overhead cam and rocker arms for valve actuation.

There’s a single overhead cam for the 2.2-liter, in-line 16-valve four-cylinder engines, and a single cam per bank of three cylinders for the 2.7-liter, 24-valve V6.

The most graphic illustration of how variable-valve timing affects power output is seen in Honda’s standard single overhead cam 2.2-liter engine, which develops 130 horsepower. In VTEC form, the 2.2 picks up an additional 15 horses.

There obviously is an advantage to an Accord V6, but bring your money. The base price for an LX V6 sedan with a four-speed automatic — the only choice — is $22,100. Going upscale to an EX V6 runs an additional $3,000.

The 1996 line has been made user-friendly, with a raft of standard features in the four-cylinder cars. There also are options like anti-lock braking.

The anti-lock brakes are standard on an EX with the VTEC four-cylinder engine, and on the V6 models.

The suspension utilizes double-wishbone suspension arms, a system used by some competing makes. But testers say that on the Honda it handles road irregularities in a superior manner.

In the cabin, the instrument panel has speedometer, tachometer, temperature and fuel gauges. The tach is red-lined at 6,200 rpm, or 8,000 rpm for those brave souls with a manual gearbox.

Honda’s engines may be single-cam, but its engineers seem to have no qualms about winding them tight.

Most reliable car I ever had and no check eng ligh

December 12, 2020
By Fungiguy from Edmonds
Owns this car

Comfy but small and im fairly short. The car has all necessary extras but i dispise that the radio does not turn off ever crazy.

I call it "My Forever Car"

November 19, 2019
By Karl from Ellicott City
Owns this car

Purchased new and in its 24th model year (currently 276,000 miles), still good acceleration and reasonable gas mileage. For comparison I owned two Camrys (1985 and 1989) for 18 years each. Tracking problems and fluid leak onsets, the Camrys were credible, but the Honda problems started later and were less severe. I also run a 1993 Geo Prizm every day. That is 51 years of driving just two new car purchases. My last car payments were in 1996 and may have enabled me to retire without loss of living standard. Money was tight when I bought it so it was the DX model with manual locks, window cracks and mirror adjustment. For those feature I regret not getting the LX model. However, the window cranks impressed some child passengers who had never seen them before. We told the kids to ask their parents to buy them on their next car.

I have a 96 Honda Accord Coupe EX 2.2 Manual Transmission. This thing is indestructible! I bought it a year and a half ago and put 50,000 miles on it. I drive A LOT in a high traffic area. Currently have 145,000 miles on it. I am religious about changing oil. I bought it with a new head gasket. I have changed the brake pads twice. That's about it. I forgot to park it in gear, on a hill, and it rolled half a block into someone's house. (Thank goodness for car insurance.) I was able to back out and drive it home! It needed a new windshield and head lights. That's it!. Sometimes old cars squeak. My Honda drives smooth and quiet to this day. They sure don't make them like they used to.

Rating breakdown (out of 5):
1 person out of 1 found this review helpful. Did you?
Show full review
See all 37 consumer reviews

News
What's the Most Stolen Car in Your State? 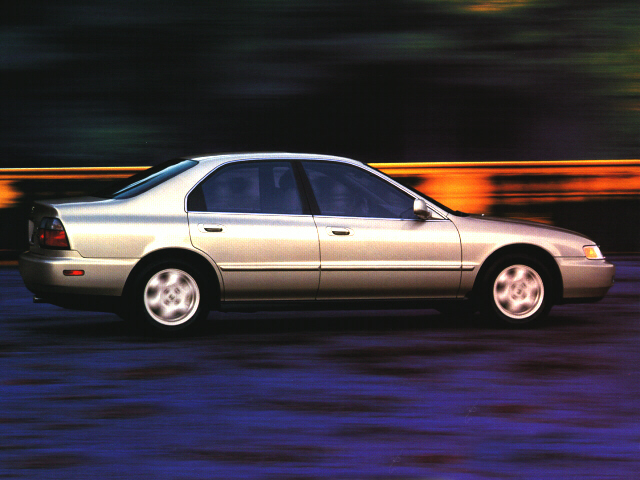